Rising to the Executive Chef position at the Common, Sean Freeman is the perfect example of what it takes to be successful: hard work, determination, talent and surrounding yourself with the right people. 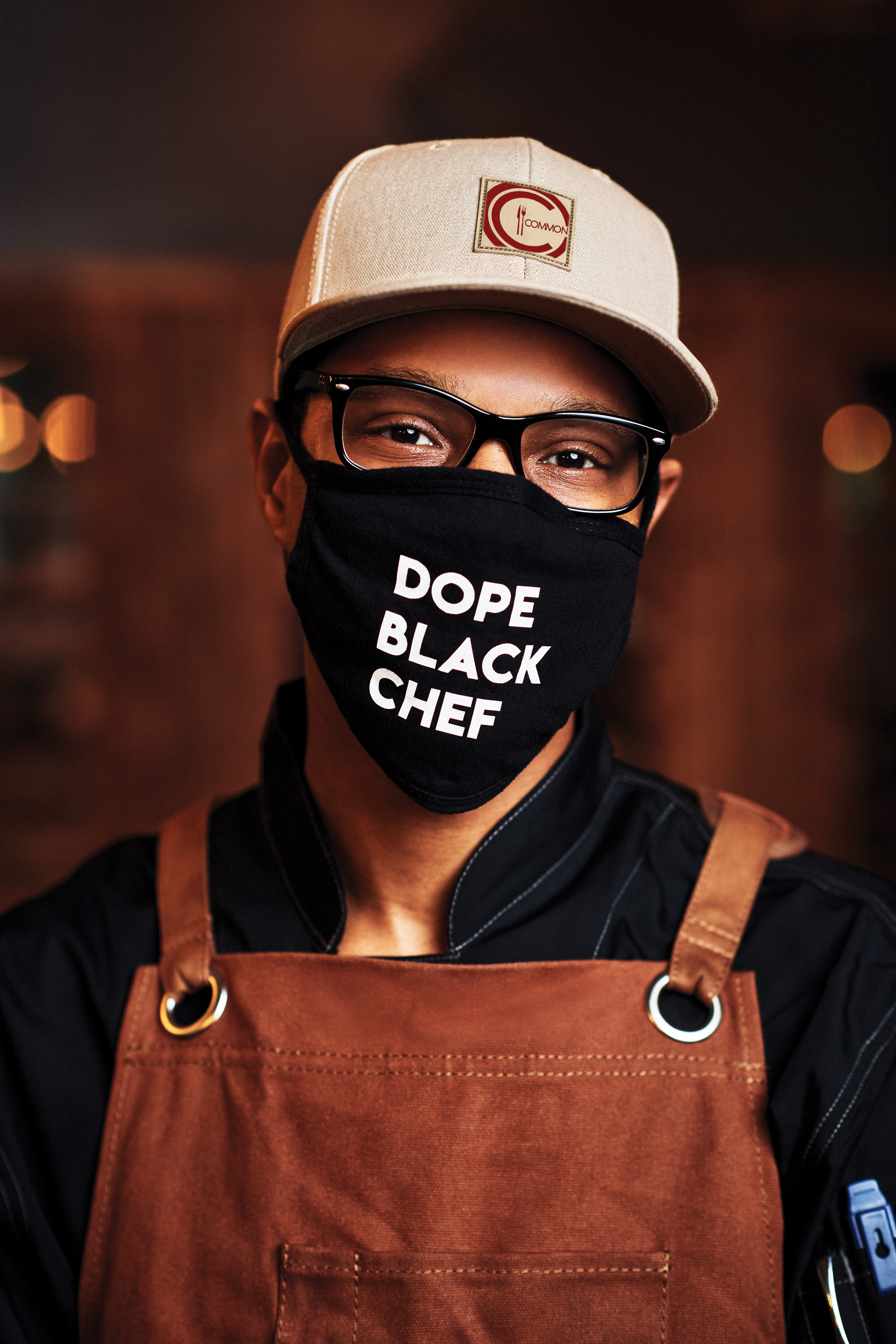 Rising to the Executive Chef position at the Common, Sean Freeman is the perfect example of what it takes to be successful: hard work, determination, talent and surrounding yourself with the right people. / Photo: BLAKE CROSBY

And to think, it all started because the kitchen at Ordinary Pub needed a little more space. “We needed a prep kitchen,” said owner Mike Vaudrin. “I overshot by about 7,000 square feet.” Those 7,000 square feet became their second restaurant The Common. They purchased the property in August of 2018 with an eye on expanding their restaurant culture, little knowing at the time the trials that lay ahead.

first got involved with Chef Grizz (Justin Grizzard) about 10 or 11 years ago when we were working together as line cooks in my first fine dining job,” said Freeman. “He was just out of culinary school at CIA, but he had so much knowledge.”

Chef Grizz spotted talent in his fellow line cook. “At some point after a year or two he came to me and said, ‘You should really do this. You have a knack for food. It’s a talent.’”

Rather than point Freeman toward culinary school, Grizz took him under his wing, introducing him to other chefs and helping usher along his culinary journey. Even when they were working in different restaurants, “I always had him in my corner.”

The pair reunited at Ordinary Pub when Freeman was hired in 2016. When preparations for Broughton Common began, Grizz began grooming Freeman for the top spot. “They needed to start building and get the menu ready, so one of our sous chefs got promoted to GM and I was promoted to executive chef,” said Freeman. “We literally came out of the kitchen to run this place together. I have a lot of respect for Mike (Ordinary Pub and Common owner Mike Vaudrin) for believing in us.”

Now, with the Common, Chef Grizz is officially passing the torch to his former protégé. As Chef Grizz transitioned to corporate executive chef over both restaurants, he tapped Freeman to take over the Common. “The rapport we had and the connection we had is like the dynamic duo,” said Freeman. “He was doing the job and he’d slowly step back as I would slowly assume the chef position. It was a smooth transition with him grooming me to handle operations and manage a team.”

And having taken the reins, this true Savannah native is putting his own personal stamp on the menu at Common. Among personal favorites of his like the lobster and crab white gumbo you’ll find a common theme that speaks to his Savannah upbringing. “I’ve been really focusing on bringing some Southern touches to our cooking, getting it to where it’s like eating at home,” he said. “I want Common to feel like sitting at mom’s house.”

In fact it was his godmother who inspired one of the first items he added to the menu, and a true staple of Southern cuisine: the heavenly cornbread.

“I used to go to my godmother’s house and she had this cornbread that literally tasted like cake. She gave me the recipe and I put a little bit of a culinary spin on it.”

“That’s what’s great about cooking – taking that childhood memory and being able to share it with someone else.”

It’s a thoroughly deserved opportunity for a kid whose natural talent has taken him to the top of the heap at the Common.

“I felt a lot of pressure to be great, to be able to produce great food and manage a group,” said Freeman. “Having so much talent around me, like our owner Mike, Chef Daniel and Chef Eamon, is really nice.” 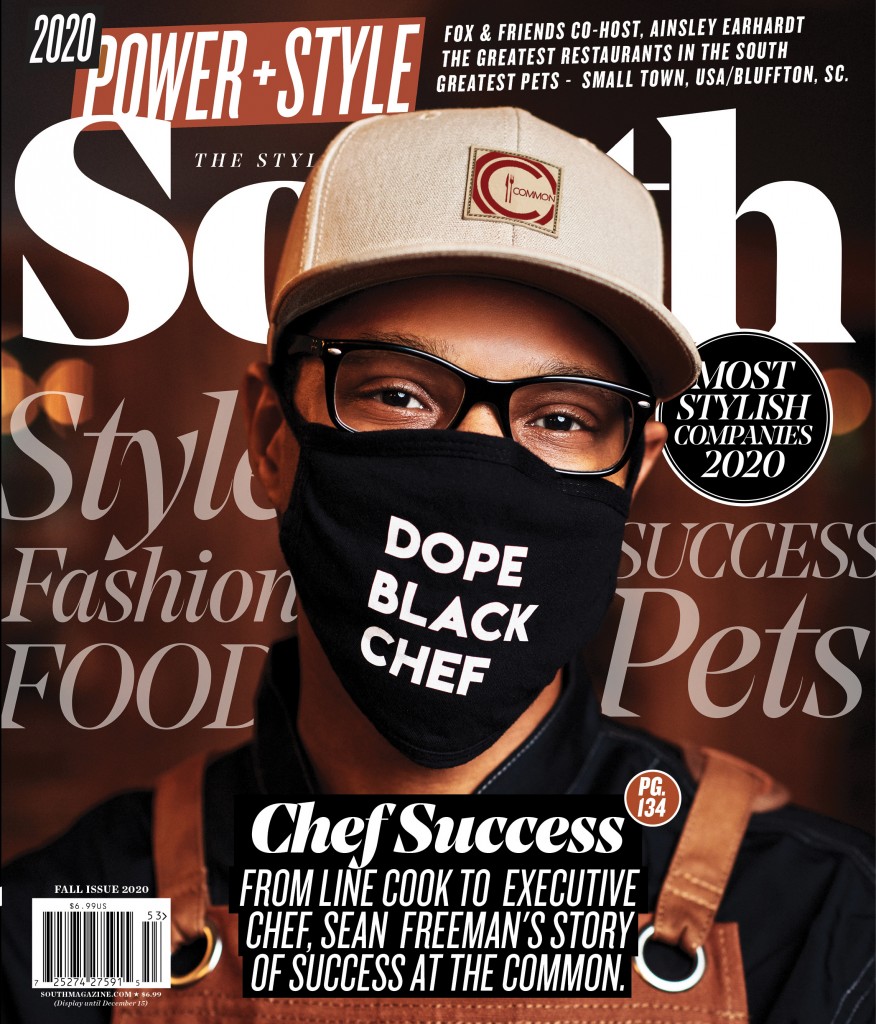 Sean Freeman was featured on one of three collectible covers for South magazine’s Oct/Nov Issue #85.  Our power and style issue 2020, features the most stylish companies in the South, Southern Charm star Kathryn Dennis, NFL player Anthony Lanier, Assistant U.S. Attorney and former professional skateboarder Greg Gilluly, the small-town Southern style of Bluffton South Carolina, the inside story of a $300 million hotel, the gala of the decade and some of the coolest restaurants this side of I-95.  To order your copy of this cover go to ShopSouth.

Enjoy this article? Subscribe now to the print edition or get instant access to our interactive digital edition.