Here is the breakdown of the New Year's Six bowl games, preview of the College Football Playoff semifinals and the top storylines to tune in for. 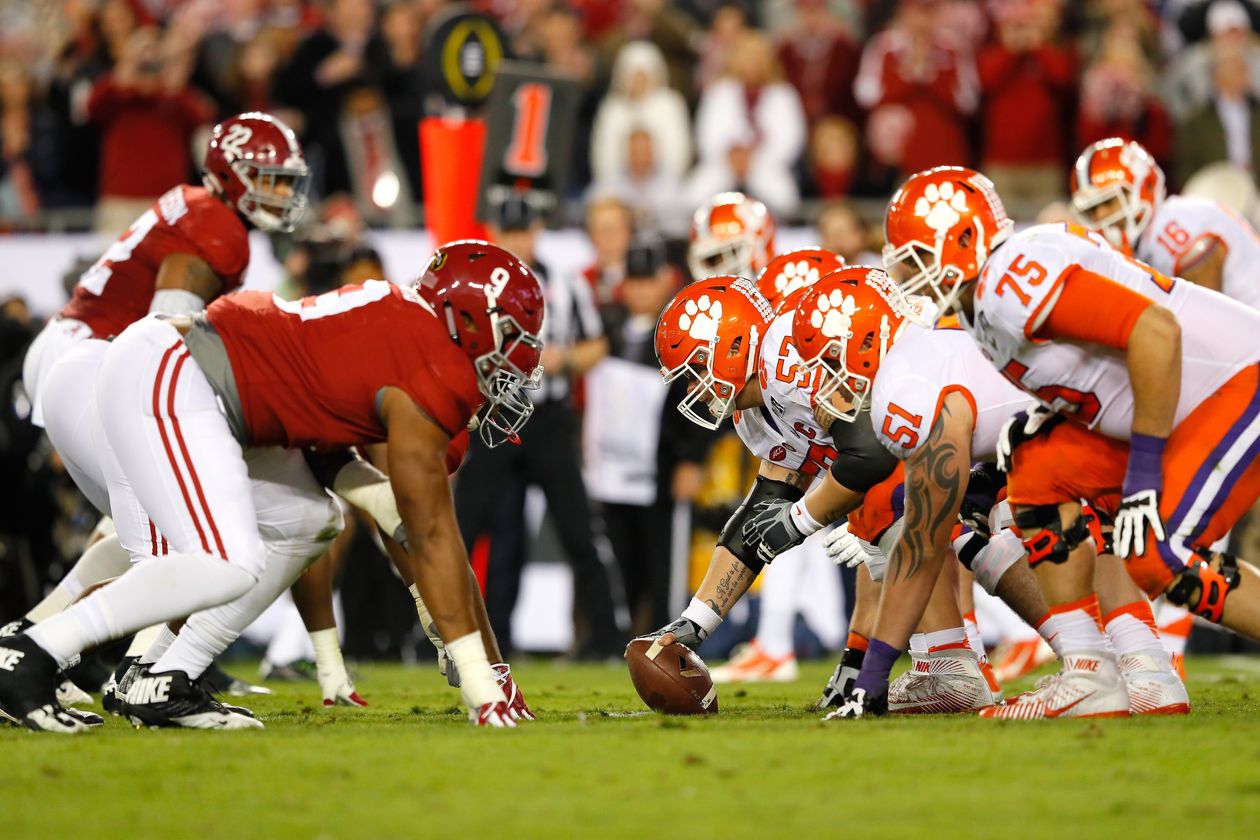 Are we headed for another Clemson-Alabama rematch? Photo Credit: Kevin C. Cox/Getty Images

When some say, “It’s the most wonderful time of the year,” some are referring to bowl season. Here’s the breakdown.

Bowl season kicked off on December 21, 2020 with Appalachian State defeating North Texas 56-28. So far, 10 of 27 currently scheduled bowl games have been played. In a typical bowl season, there are 40 scheduled games; however, due to the COVID-19 pandemic, teams have forfeited games and the 2020-2021 season ran an abbreviated schedule.

Due to teams like South Carolina and Tennessee (among others) forfeiting games, we’ll see unexpected matchups taking their place, making for entertaining football. Despite the unexpected twists, some things have stayed quite predictable, such as the final four teams that make up this year’s College Football Playoff: (#1) Alabama, (#2) Clemson, (#3) Ohio State and (#4) Notre Dame. Surely, many college football fans rolled their eyes as the top four teams in the country were announced December 20 but unfortunately for diversity’s sake, these teams just can’t be shaken. Texas A&M hangs right outside peering in, whereas undefeated teams like Cincinnati, Coastal Carolina and BYU represent the byproduct of the College Football Playoff selection committee bias and stand ready to take their frustration to the field.

Bowl season brings drama, plot twists, feuds, rivalries and high-stakes competition to your living room in that awkward period between December holidays and New Year’s Eve. Here’s what you need to know to make the most of the remaining 17 games:

The Cotton Bowl Classic will host three-loss, seventh-ranked Florida and two-loss, sixth-ranked Oklahoma. If you can get past the fact that these two teams are ranked this high and playing in a New Year’s Six game, you’ll see Florida quarterback Kyle Trask try to make his final case in the Heisman race. 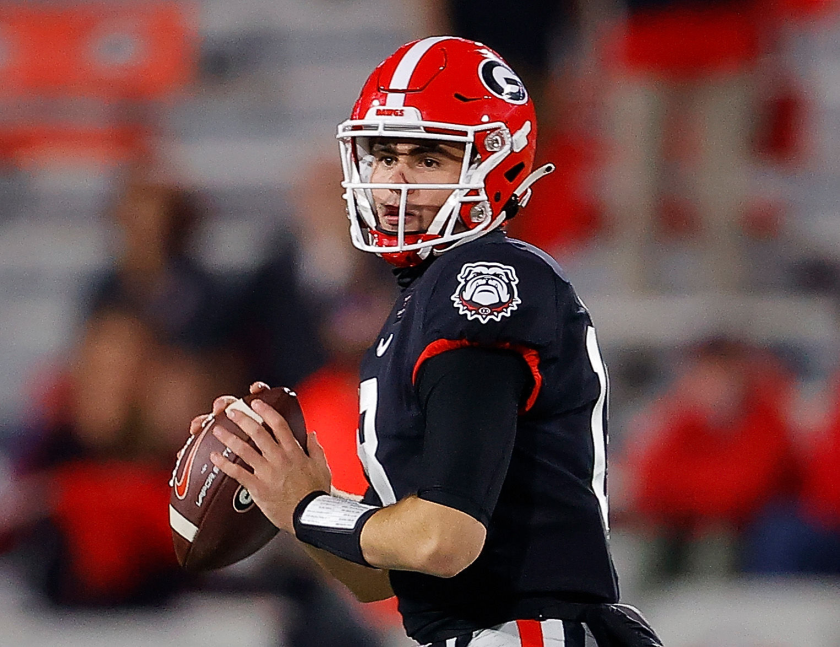 Georgia’s two losses this season were to (#1) Alabama and (#7) Florida. JT Daniels stepped in as starting quarterback for the Bulldogs for their final three games resulting in three wins, and has given fans an optimistic outlook on next season. The Bulldogs face the Bearcats, who some consider to have been snubbed from the CFP and are expected to come out hungry. JT Daniels will be throwing against a defense that gives up only 4.32 yards per play, better than the likes of Clemson, Georgia and Alabama. This #9 VS. #8 matchup should be a fierce showdown .

The last time these two teams played was in 1986, when Notre Dame defeated Alabama 37-6 and leads the all-time series 5-1. Alabama has won two of its last four championship game appearances and the Irish are seeking their first national title since 1988. Alabama’s roster boasts two Heisman finalists, Devonte Smith and Mac Jones. Notre Dame QB Ian Book ranked ninth in the Heisman race. The two teams will face off in the Rose Bowl, which will be played in Arlington, TX rather than the traditional stadium in Pasadena, California, due to COVID-19 restrictions in the state.

Heisman finalist, projected #1-overall NFL draft pick and Clemson QB Trevor Lawrence and the Tigers will take on (#3) Ohio State in the Sugar Bowl. After the Big Ten altered its minimum-game requirement for their conference championship game, Ohio State was then permitted to play and proceeded to defeat the West Division champion Northwestern in an uninspiring victory. This win solidified Ohio State’s spot in the playoffs over undefeated teams with more wins to represent power-five Big Ten conference in the CFP. Nevertheless, you can watch them try to upset Clemson in the Sugar Bowl showdown.

Oregon won the Pac-12 championship after Washington could not represent the PAC-12 North in the conference title game because they could not field 53 scholarship players against the USC Trojans. They’ll play Big 12 runner-up Iowa State in an intriguing matchup.

After getting handily beat by Alabama back in the first week of October, Texas A&M was undeniably dominant for the rest of the 2020 season, earning them a top-five spot in the rankings. They’ll take on UNC, who has shown promise but ultimately had a turbulent 2020 season (like many other teams). This will likely be an exciting game for Aggie fans as they look forward to the 2021-2022 season.

Auburn fired head coach Gus Malzahn on December 12, 2020 concluding his eighth season and 68-35 record, buying him out of his contract for $21.45 million. They hired Bryan Harsin (formerly of BYU) as the next head coach, who will be scouting the game from the sidelines. Northwestern is the 2020 Big Ten runner-up facing an unranked, head coach-less Auburn on New Year’s Day.

Iowa got off to a slow start with two losses but has been riding a six-game win streak looking ahead to their bowl matchup against Mizzou. Eliah Drinkwitz of last year’s 12-1 Appalachian State team looks to tip his 0.500 2020 record to 6-1.

7-0 and #22-ranked San Jose State is defending their undefeated status, whereas 6-1 Ball State is looking to knock them off and finish the season 7-1. This game promises to be a sneaky-great matchup of teams you might not typically watch in a given season.

West Virginia was originally scheduled to play Tennessee in the Liberty Bowl; however, the Volunteers backed out following COVID-19 complications and Army was tapped to take their place after originally being snubbed of a game. Army’s impressive 9-2 season makes them tough competition for West Virginia.

Here’s a complete list of the remaining bowl games (as of December 28, 2020) including location, bowl name, matchup, rank and record, date and time, and original spread (subject to have changed): 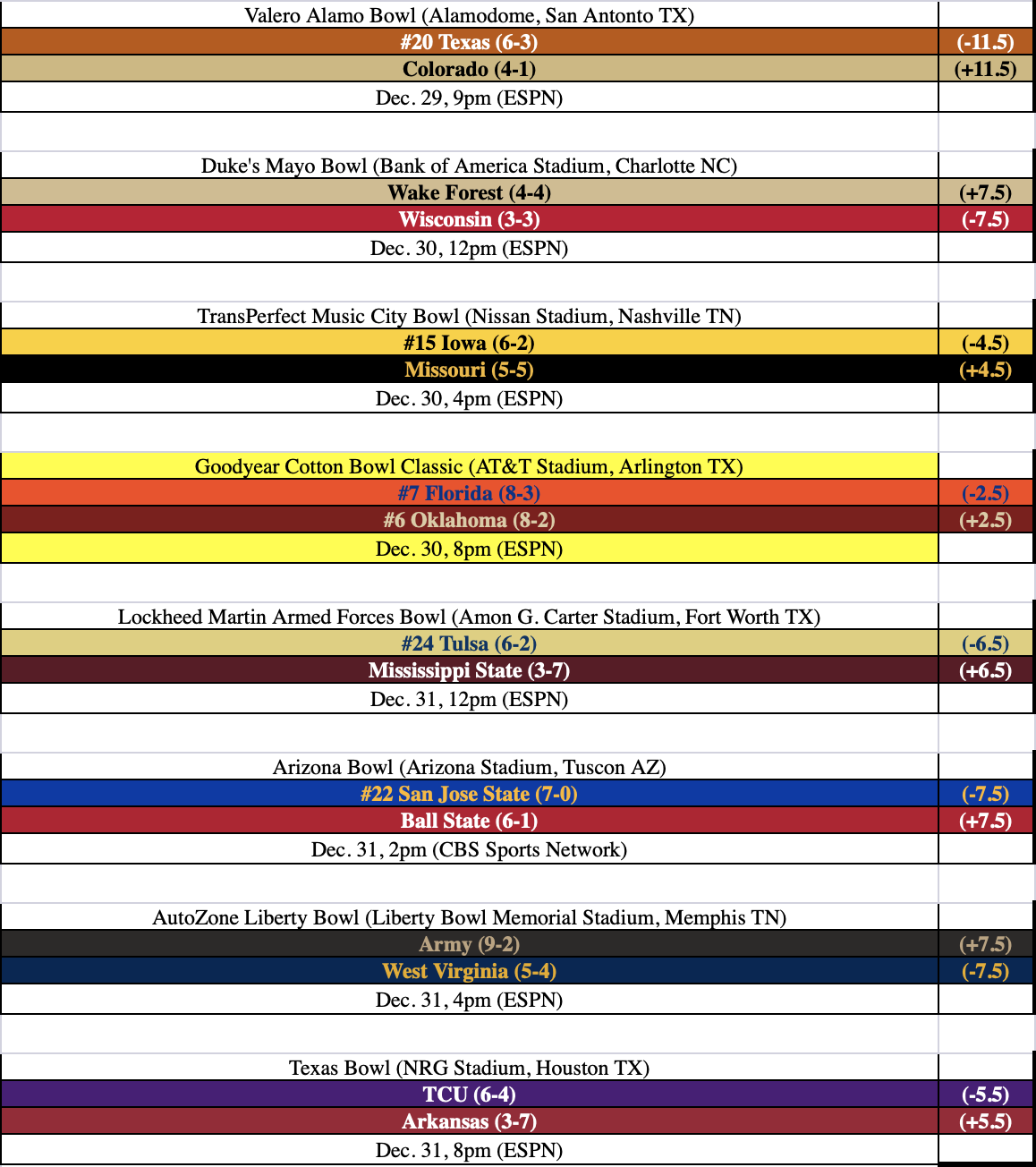 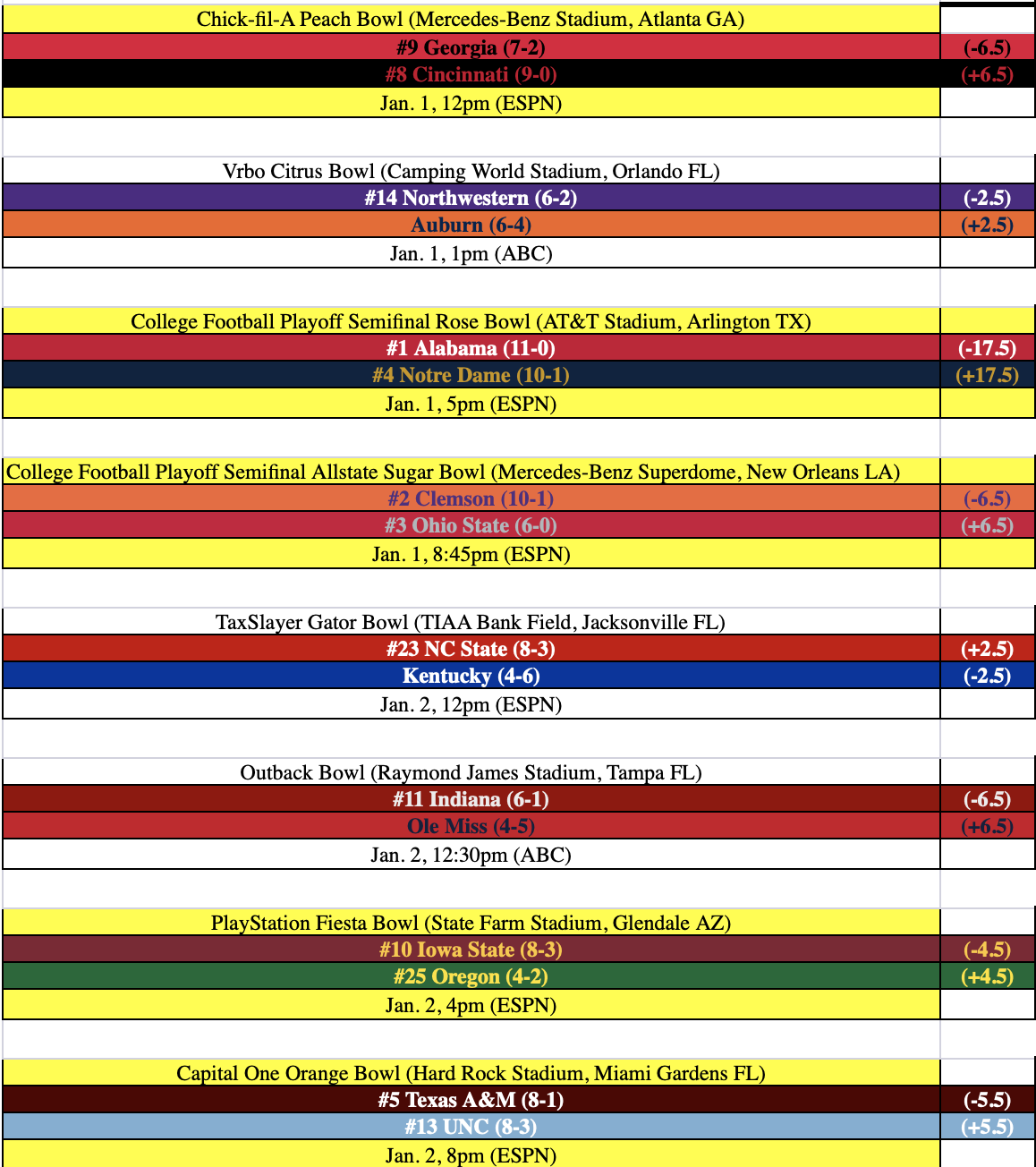