They may be world-famous for their Southern charm and culinary prowess, but before they ever appeared on camera or opened the famed Lady and Sons, they were just a lady and her sons. With fame came controversy, a storm that many thought would spell the end of the Deens. But ask any Southerner and they’ll tell you: You can’t keep a good family down. 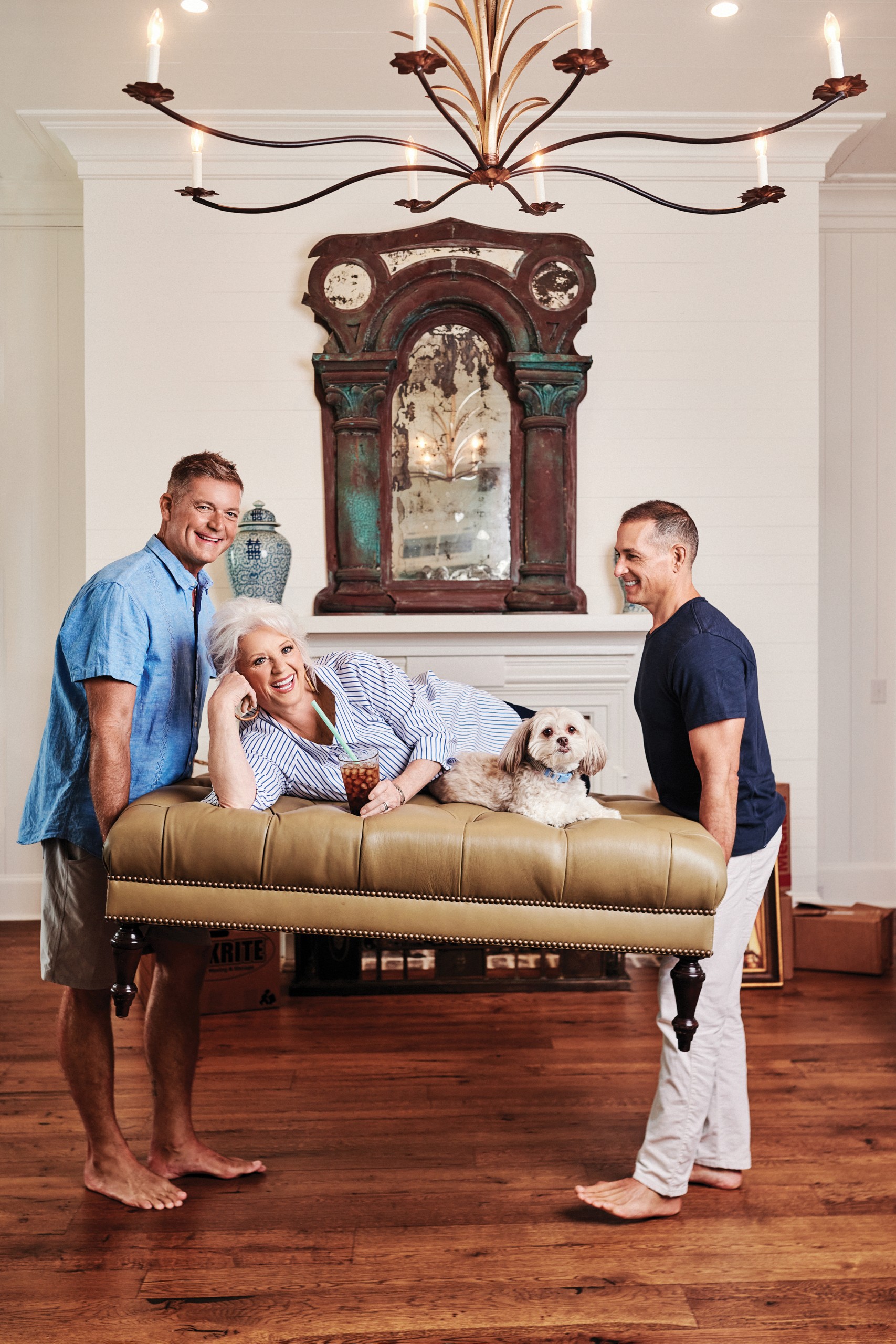 Brothers Jamie and Bobby give their mother Paula Deen (and LuLu) a hand moving back into her old house on Wilmington Island, Ga. This was the home where Paula began building her career and where countless episodes of her show were filmed. Photos / Blake Crosby

It’s impossible to talk about the present, or indeed the future, of the Deen family without first addressing the past. It’s hard to believe that it’s been eight years since the first family of Southern cooking went from culinary icons to cultural pariahs, but perhaps it only looks that way from the outside. For the Deens, it has been eight years of fighting back. The pigpile of allegations against them ranged from embarrassing to damning, but at each step the family did their best to make amends, seek out lessons learned, and move forward. 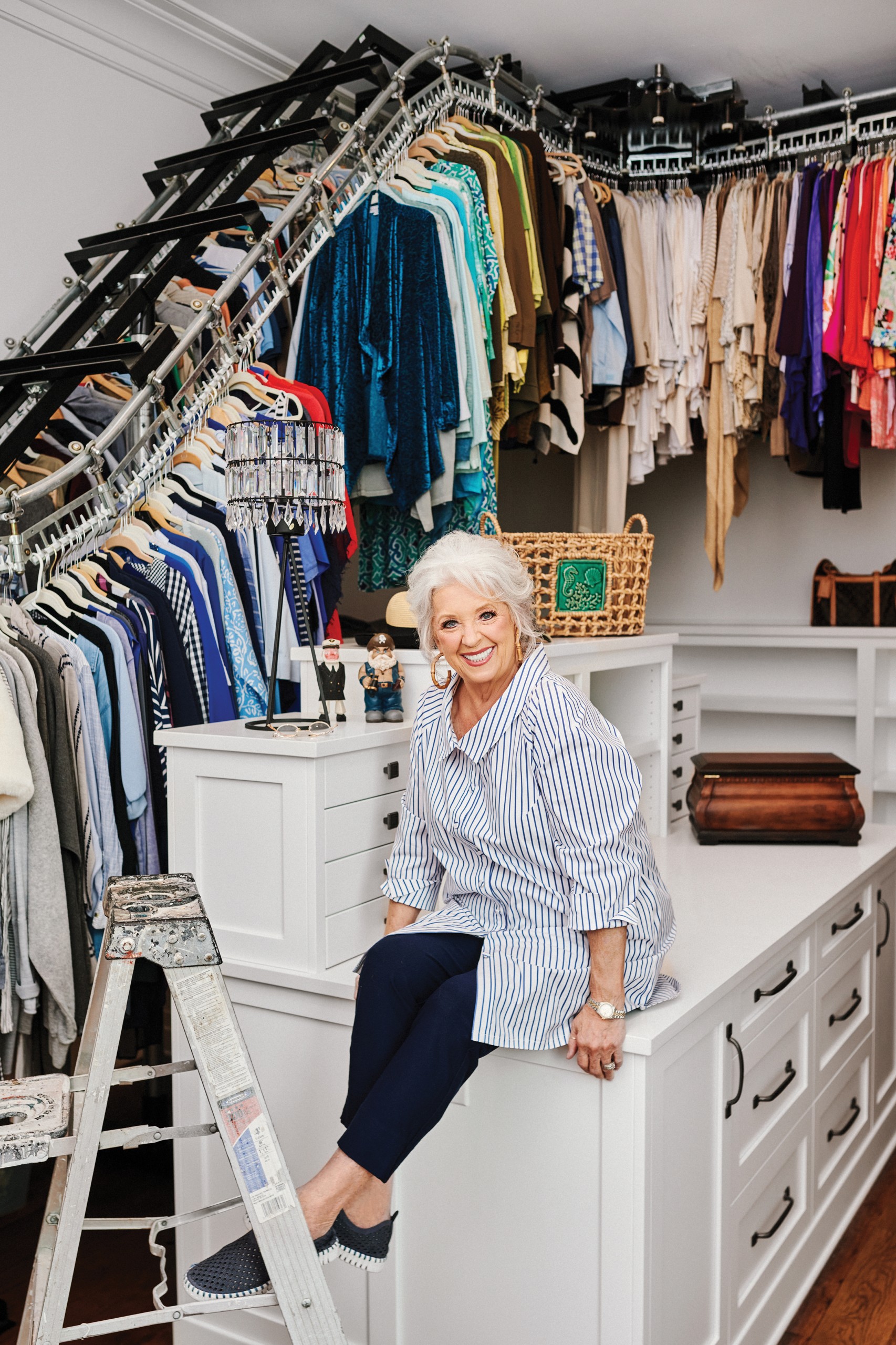 After cashing in on Chatham County’s largest residential sale in closing on her amazing waterfront estate, Paula Deen moved back into her original home after eight months of renovations. Before that, she embraced grand-motherhood living in her son Bobby’s guest house.

It’s easy to forget that the Deens are, at heart, a family like yours or mine. After all, Mother Paula and sons Jamie and Bobby have been at the vanguard of the South’s culinary renaissance, representing our region on TV screens across the nation and gaining international fame (and, yes, some critics) along the way. They’re almost monolithic in that sense, viewed more as “The Deens™” than three people with the same dreams, hopes, loves and losses as anyone.

And one thing we’re being told lately, as a silent plague of loneliness sneaks in behind the pandemic, check in on the people you care about. With restaurants being particularly hard-hit this past year and a half, it seemed like the perfect time to catch up with the South’s first family of food. 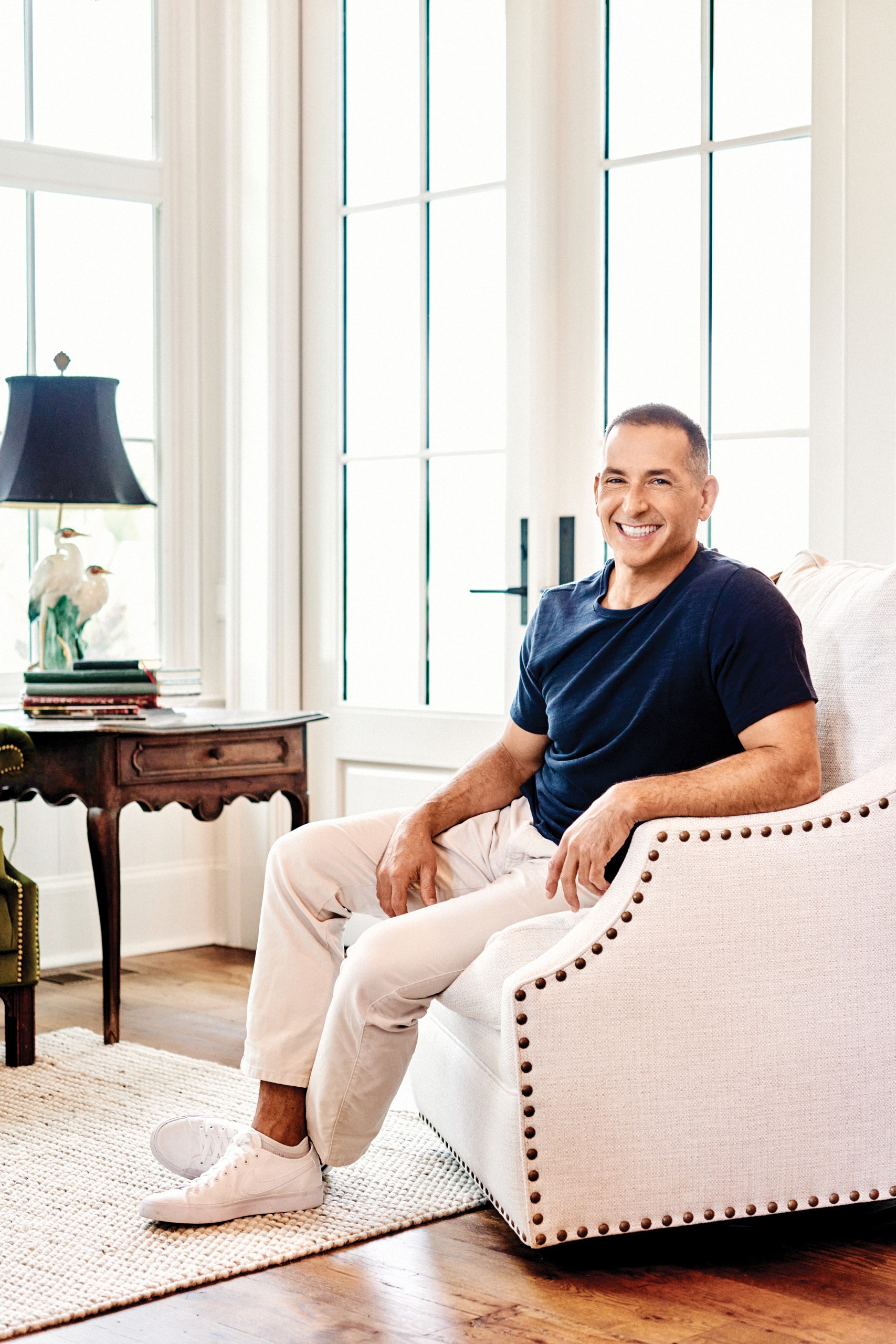 There and Back Again: Jamie’s story

Two years ago, Jamie and his wife Brooke made the decision to pull up their Savannah roots and move clear across the state to Athens.

“We thought we could move to Athens and branch out. Then the pandemic hit and we didn’t know a soul there,” said Jamie. “Life’s an adventure. It was good timing for us until it wasn’t.”

Still, for this devoted father that just meant more family time. “I volunteered at a food bank, and spent time with the boys… It really was the perfect year,” he said.

Along with more family time came more family, as Jamie and Brooke welcomed their third son Davis in the spring of last year. Older sons Jack and Matthew were quick to welcome their baby brother. “They both dote on Davis,” said Jamie. “The common thread in my life, since Jack was born, has just been the joy and satisfaction I get from being a parent. We didn’t plan to have children thirteen years apart, but people say it keeps you young. Heck, I was going down waterslides yesterday.”

As a die-hard Dawgs fan, Jamie was thrilled to have a child born near UGA, but it wasn’t long before the Hostess City’s siren song started drifting in on the breeze.

So Jamie and Brooke returned to Savannah with one more son then when they left, finding a home in the Landings ideally suited for the busy family. “There are so many younger families here, and it’s like resort living,” he said. “There are all these camps and programs, plus we see deer and alligators all the time. It’s really like living on a nature trail.”

He returns at a time when the family business finds itself at a crossroads, with The Lady & Sons built on a foundation of its famous buffet, and buffets quickly disappearing. “I think the exposure our restaurant had because of it was great, but buffets are a dying dog,” he said. Like many restaurants, they pivoted during the pandemic. For The Lady & Sons, that meant family-style dining, something Jamie welcomed. “I’d been wanting to change to family style for a long time,” he said. “We’d literally just never had the amount of time to close and redo everything.” 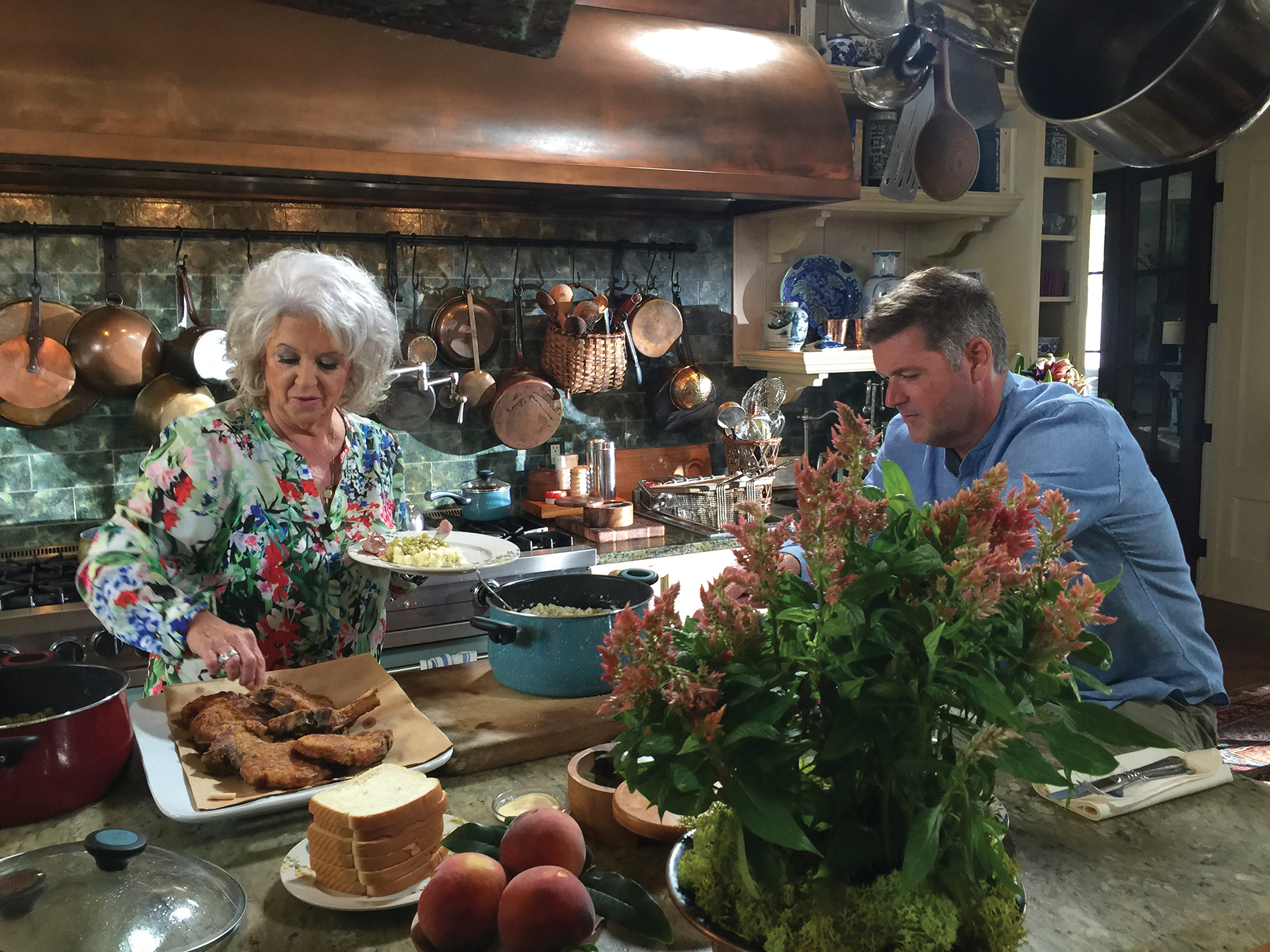 Paula Deen’s “Quarantine Cooking” Youtube series has received thousands of views and her channel has over 350,000 subscribers. Deen recreates familiar recipes from her catalog of favorites as well as some new recipes.

When Paula Deen’s majestic waterfront estate, Riverbend, sold last year it set the record for the highest residential sale in Chatham County history. Set on 5.5 acres with a 14,500-square-foot main house and every luxury amenity you can think of, Riverbend set a standard for grace and elegance.

But it’s easy to forget that a giant house just means more upkeep.

“It was a compound. We just didn’t want that kind of responsibility. I mean, there were four structures outside the main house,” said Paula, before the voice of her husband Michael chimes in somewhere in the background. “Five. Michael said five. Anyway, it was a big nut and we were tired of cracking it.”

The sale means that Paula and Michael can move back into their original dream home, purchased when the couple first married 17 years ago, but in the meantime they have been living in Bobby’s guest house. Which gives Paula the perfect opportunity to just be a grandma.

“All 11 of my grandchildren live here in town,” she said. “It’s a grandparent’s role to spoil them, and then tell their parents, ‘Here you go. You fix what I just started.’”

At this, she laughs, and in her laughter you feel the effortless spirit and energy that have made Paula Deen a superstar. But in the era of the pandemic, even superstars had to try new things.

And that’s how “Quarantine Cooking” was born. Averaging tens of thousands of views each, these bite-sized cooking segments have given Paula an entirely new avenue for sharing her tantalizing cooking. And the change in workload hasn’t been bad, either.

“It’s so easy. Oh Lord have mercy. When I did all my shows for television, we’d have 35 people in our house to shoot a 30-minute show,” she said. “It was very hard. I had a fun time doing it, but just having that many people in your house… Now we do it all with my assistant’s iPhone.”

Quarantine treated her well, but with Paula Deen Family Kitchens opening up around the country, the lady herself is anxious to get back out there.

“I haven’t been able to get out and visit over the past year. I’m ready to get out there and see fans and sign books and take some pictures. I’m really anxious,” she said. 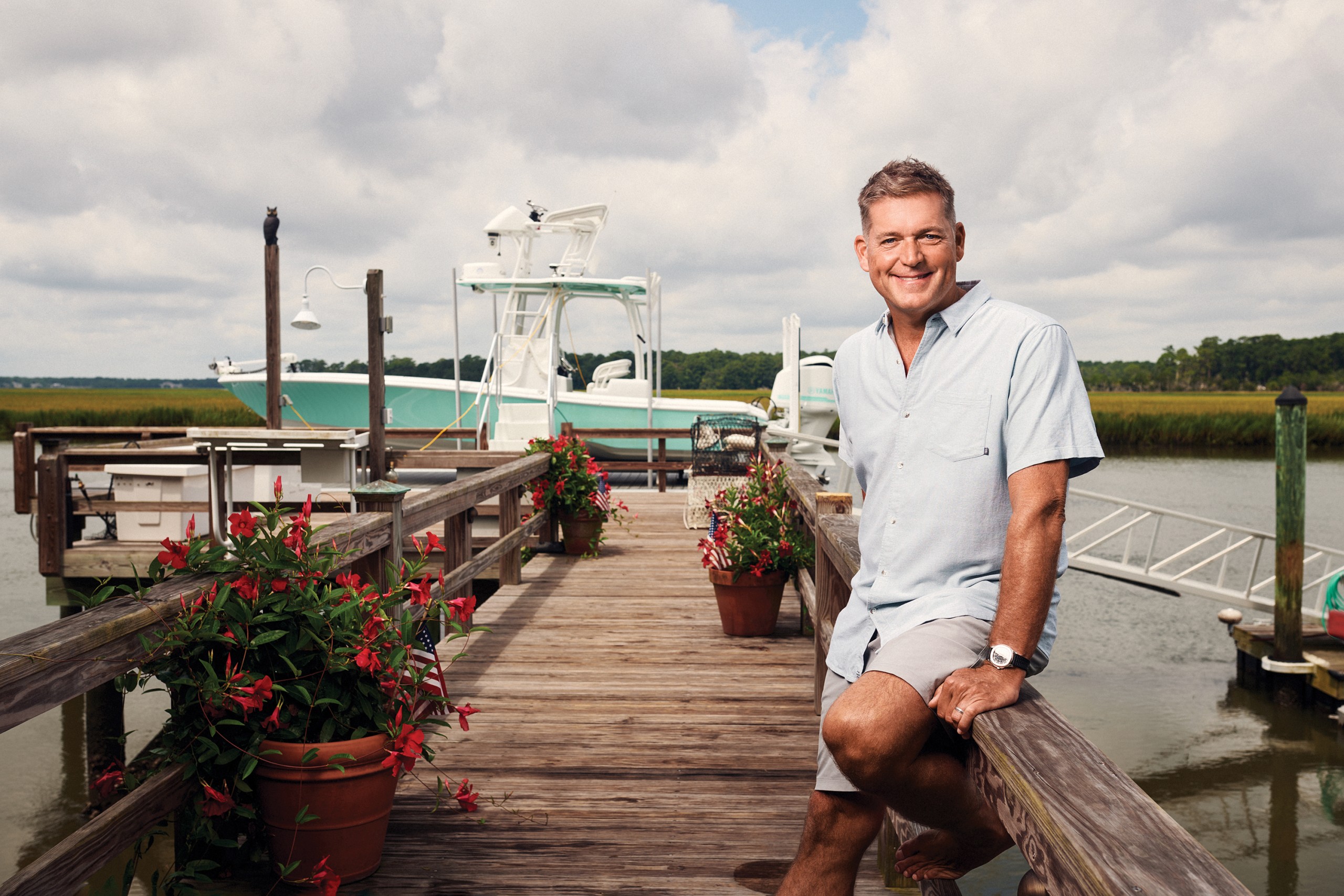 Since South last caught up with Bobby Deen, he has welcomed triplets with his wife, Claudia, and has stayed steady on his path of fitness.

They say good things come in threes. We’re not sure who said it, but we think they may have had Bobby and wife Claudia in mind. The couple welcomed triplets back in 2018.

“I was just stunned, in disbelief [when I found out it was triplets]. I immediately went out and bought a school bus,” said Bobby with a laugh. “My wife told me when we got married, ‘I don’t want a child. I want a family.’ I told her that’s up to God, and then we hit a triple.”

Linton Paul, Amelia Anne and Olivia Maria Deen now lighten up a room, with their blend of lively personalities. But their birth represented one of the biggest scares the couple would ever experience. “They were born at 26 weeks, so our children had a four-month NICU stay. They were intubated, they were on oxygen, it was just as scary as it could be,” said Bobby. “Fortunately, every time there was an opportunity for something to go wrong, it went right. And Memorial Medical Center, that NICU is just top-shelf.”

The triplets are happy and healthy now, and fortunate to have their grandma living right in the backyard. “That’s an interesting situation. We’re a close family. We always have been,” said Bobby. “When my mom said they were selling the house, I told her we have a perfectly good guest house and I could use built-in grandparents. She said, ‘Are you sure? We might be there for 30 days or more.’ They have been there a year.”

The time together has given the triplets tons of grandma time, and given Bobby a chance to confer with mom as the empire expands. “Even though the COVID year was hard on us, it was hard on everybody. But we got through it and I’m so happy we’ve been so well received in all the cities we’re in,” said Bobby. “Life is good on the business front.”

It’s also been good on the personal front, with his journey to fitness able to continue post-lockdown. As previously documented in South, Bobby has been working to turn around his once-unhealthy lifestyle. “Once we got through the woods and got vaccinated, I went straight back to it,” he said. That includes daily jiu-jitsu lessons and strenuous workouts with coach Sam Carter five days a week. “At 51, I love going to the doctor now, because every time I go it affirms that everything I’m doing isn’t for naught… My doctor tells me, ‘Your heart is great, and you’re in perfect health.’ That’s music to my ears.”

But still, as much attention as he pays to his health, he pays even more to the three little miracles waiting at home. “Nothing’s about me anymore. Everything’s about those children,” he said.•

Paula Deen’s “Quarantine Cooking” Youtube series has received thousands of views and her channel has over 350,000 subscribers. Deen recreates familiar recipes from her catalog of favorites as well as some new recipes.