The South is famous, or perhaps infamous, for its deep history of hauntings and paranormal activity. It’s believed that some locals have decided to stick around the Lowcountry for a century or two while other spirits simply remain, restless from their tragic fate.

Savannah and Charleston’s infancy were tumultuous to say the least, as yellow fever and battles raged, leaving behind a sordid and dark past. It seems the power of human emotion and suffering has left an imprint on the area, whether through mere echoes of history or the genuine presence of intelligent spirits. Either way, it’s commonly accepted that the coastal south is where ghost stories abound. Let’s take a look at a few of the paranormal hotspots in the lowcountry that continue to fascinate visitors and locals alike. 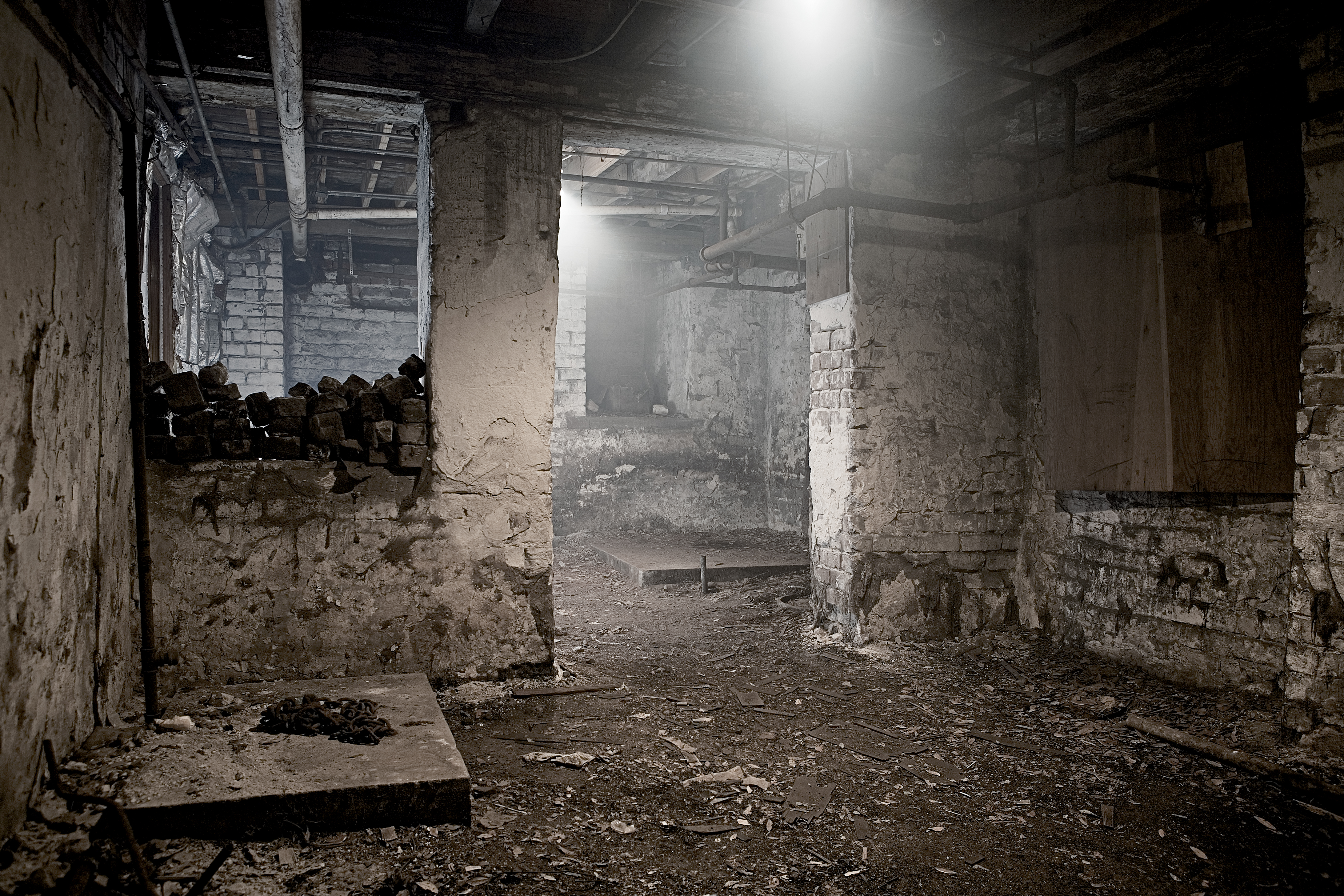 Built in 1753, the Pirates’ House is the oldest building in Savannah with humble beginnings as an herb house. The location changed drastically as it became a tavern, restaurant and inn for sailors and privateers. In the cellar, was a brick tunnel used for storing rum; however, it was also used to temporarily hide men who were being shanghaied- the pirates’ form of kidnapping in which men were forced to join their crew or walk the plank. The Pirates’ House is still a thriving restaurant but with much friendlier folk inside- at least those that are still living.

Today it’s fairly safe to say that you no longer have to worry about being drugged and dragged to the basement only to wake up on a ship hundreds of miles from shore. Instead, the unsavory characters may find other ways to scare you. It seems that many of the privateers and sailors have decided to stay at their favorite local pub, whereas others seem to be trapped in an endless loop of their own demise. The tunnel in the basement has been bricked over on both ends, but the voices of the unfortunate souls taken against their will can still be heard. According to the paranormal and true crime podcast, “And That’s Why We Drink”, restaurant staff have heard voices in the cellar say, “Where am I?” and “Grab him by the feet.” There is an account by a police officer who saw a group of men carrying another man in the cellar before they disappeared into the bricked over wall of the tunnel. There have also been the sounds of drunk laughter, moans for more rum, heavy footsteps and sailor shanties in empty dining rooms.

There is an apparition of a sailor who appears next to guests, shoulder-to-shoulder. He stands so close that alcohol can be smelt on his breath before he disappears. According to “And That’s Why We Drink,” a spirit nicknamed Captain Flint from “Treasure Island”, appears and is known to be quite unfriendly. The podcasters share the cook’s interaction with the angry, pirate ghost when “he walked up to the cook when he was noticed, glared at him nose to nose… as he turned his coattails hit the cook.” 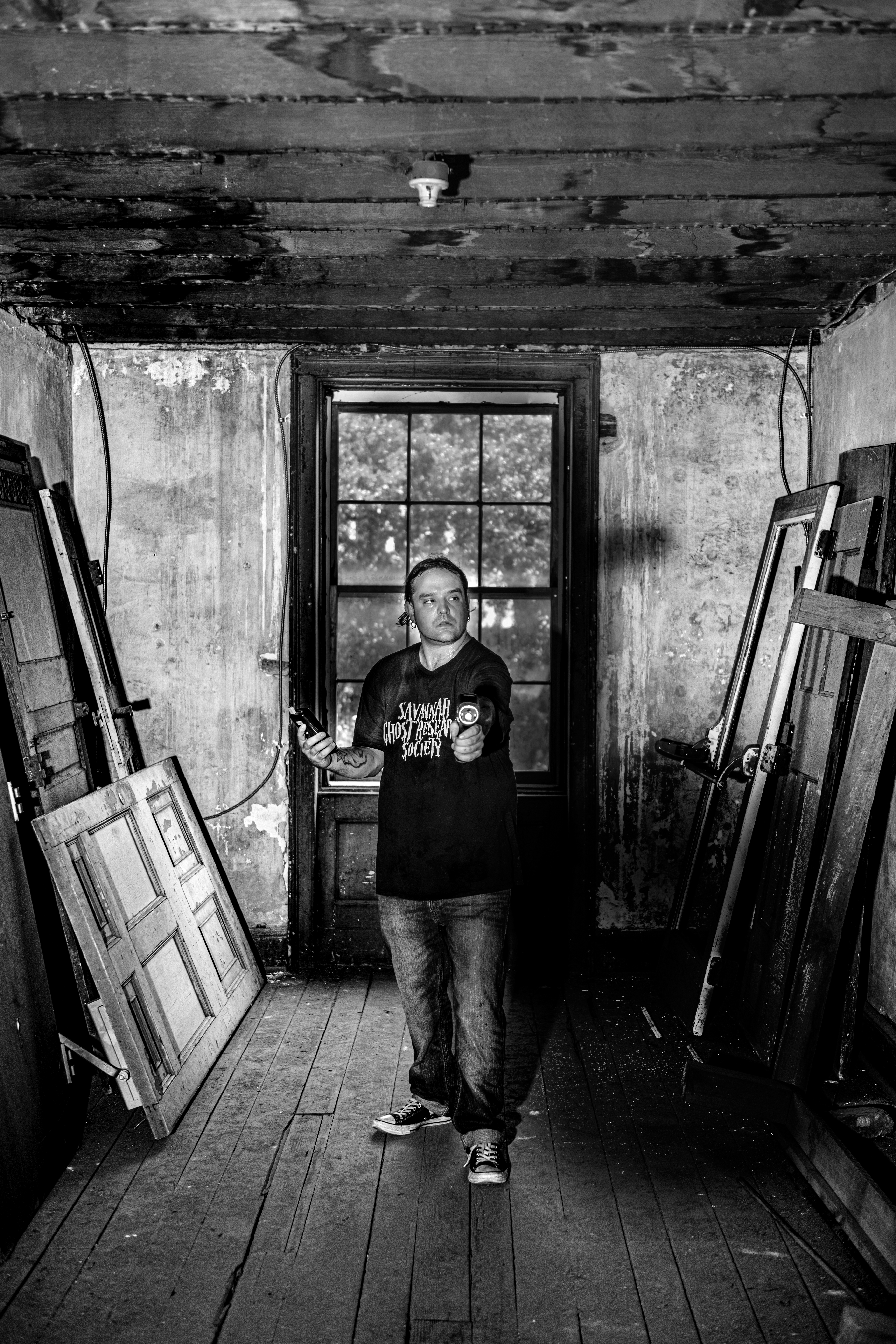 Since 1999, this lively brewery and restaurant has crafted award-winning brews and remains a popular hotspot for locals and tourists alike, just as it was when it was a hotel in 1821. As Savannah’s first city hotel, it was frequented by wealthy locals as well as visitors from the North. The building was no stranger to quarrel as violence would break out between the southerners and northerners staying at the hotel.

According to Ghost City Tours Savannah, one of the famous ghosts is a man named James Stark who was shot by the local doctor, Phillip Minas. According to the podcast “And That’s Why We Drink”, he has been caught on electronic voice phenomenon, or EVPs, saying the word coward. Other paranormal activity fits the mold of a poltergeist. Anytime the building has been under renovation, the spirits have made their unhappiness clear. Before Moon River Brewing Company, the building was a different brewery by the name of Oglethorpe Brewing Company. The ghosts, however, made construction close to impossible as construction tools would vanish, including ladders, and workers would get pushed off those same ladders. The foreman’s wife was also pushed down the stairs by the unhappy spirits.

In 1864, the hotel closed largely due to the Civil War. Instead, it served as a hospital for wounded soldiers and yellow fever victims. The building is now said to be haunted with the spirits of union and confederate soldiers as well as the ghosts of children who succumbed to yellow fever. There have been several accounts of apparitions, to include the ghosts of little girls walking around upstairs and a woman in period clothing who walks up to the bar. Other experiences are slightly less palatable as the ghosts are known to get physical. People have apparently been slapped so hard that a hand mark is visible. On one occasion described in “And That’s Why We Drink”, “A visitor looked like he actually walked through a spider web according to a tour guide. He explained later that someone had a hold of his head, neck and shoulders and would not let go.” There is an especially unfriendly spirit who resides in the basement, he has been reported to be of a very dark nature. 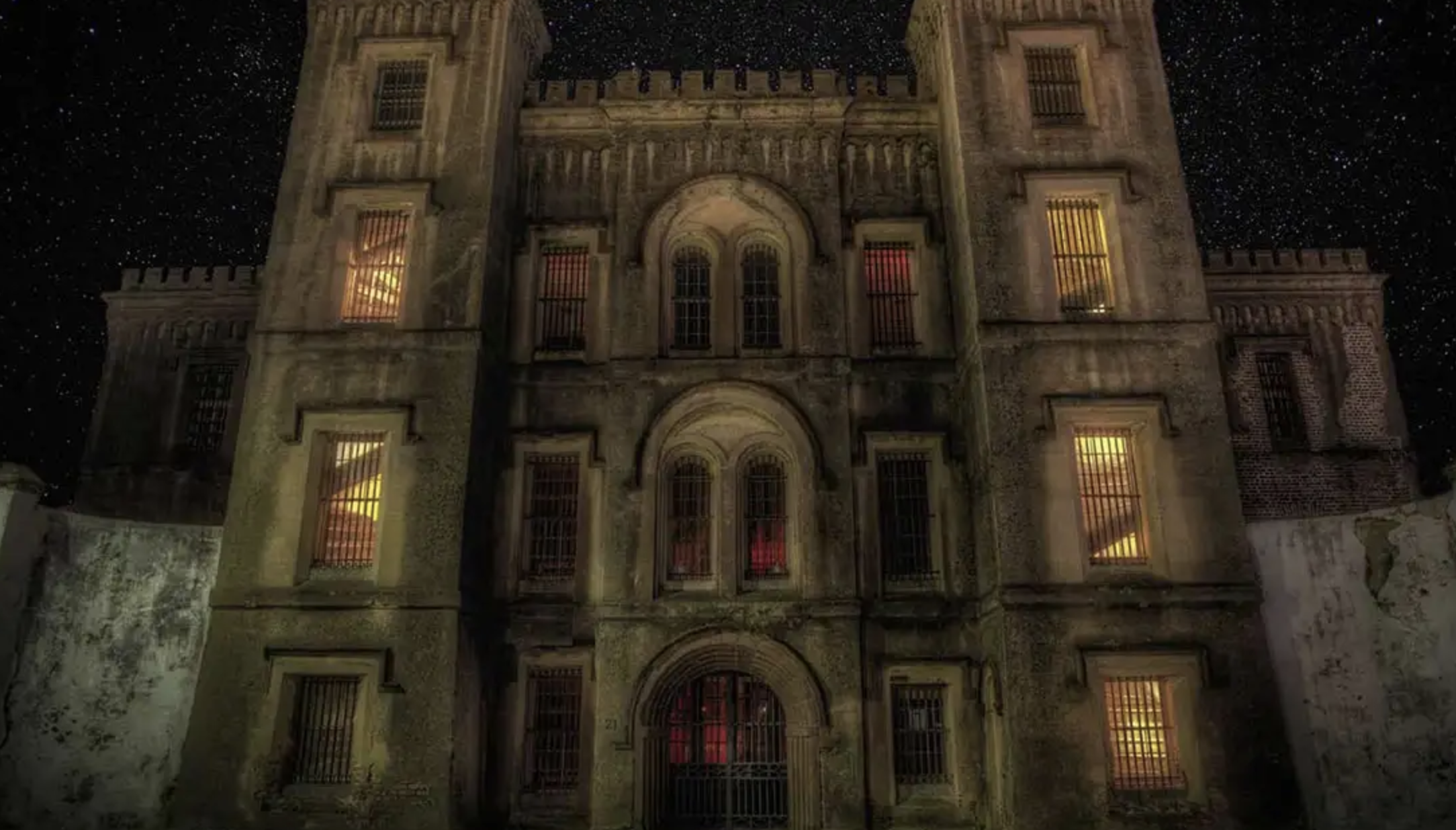 From 1802 to 1939, this gothic-styled structure operated as a federal and local prison under abhorrent and inhumane conditions. The absence of running water and electricity were only the tip of the iceberg concerning the level of mistreatment at this facility. Prisoners, specifically the mentally-ill, were kept confined in cages. Even before the prison was constructed, the grounds were used as a Potter’s Field- a cemetery where the unclaimed and the poor were buried in shallow graves.

Other than the prison’s morbid beginnings, there is one particular prisoner that spearheads the dark fascination with this building and that is Lavinia Fisher, a young woman who is considered to be America’s first female serial killer. Her famous last words were, “If any of you have a message for the devil, best you give it to me now and I will pass it to him for I shall see him shortly.” Randy Johnson, ghost tour guide and paranormal investigator, spoke to Tony Brueski on Mr. Brueski’s podcast “The Grave Talks”, where Mr. Johnson describes his experiences investigating the prison. According to Mr. Johnson, “This is a haunting of literally hundreds of ghosts.” In reference to the ghost of Lavinia he says, “She is the most active. I joke with some people sometimes and say that’s Lavinia’s castle. Lavinia runs the spirits in the jail. They all take orders from Lavinia.” People who walk past the building, specifically on Franklin St., have seen the ghostly figure of a woman staring down at them from the second floor, the same floor Lavinia was imprisoned on.

While the building was being converted into an architectural school in the early 2000s, student volunteers tasked with cleaning up the building would hear slamming doors and disembodied voices. A supervisor was clearing the building of any remaining students one night, only to run into an apparition of Lavinia. According to Mr. Johnson, she stared at him angrily and the supervisor ran out of the building and never returned. He also touches on some of his experiences with another spirit who he believes was a mentally-ill prisoner who died during the 1886 Charleston Earthquake. “Just the other day, I had a brief conversation with him and I said, ‘I’d really like to know when you died?’ And I didn’t get an answer. So instead I asked, ‘When were you hurt?’ and he goes, ‘86’, and what I’ve learned in paranormal investigations is usually when you get a number you need to put an 18 in front of it.” Before a ghost tour, Mr. Johnson says they often give younger men a warning before entering the jail. “Lavinia has this thing for younger men…and we even warn younger men, ‘Be careful. Be on the lookout.’ She may mess with you; it just depends on her mood.” 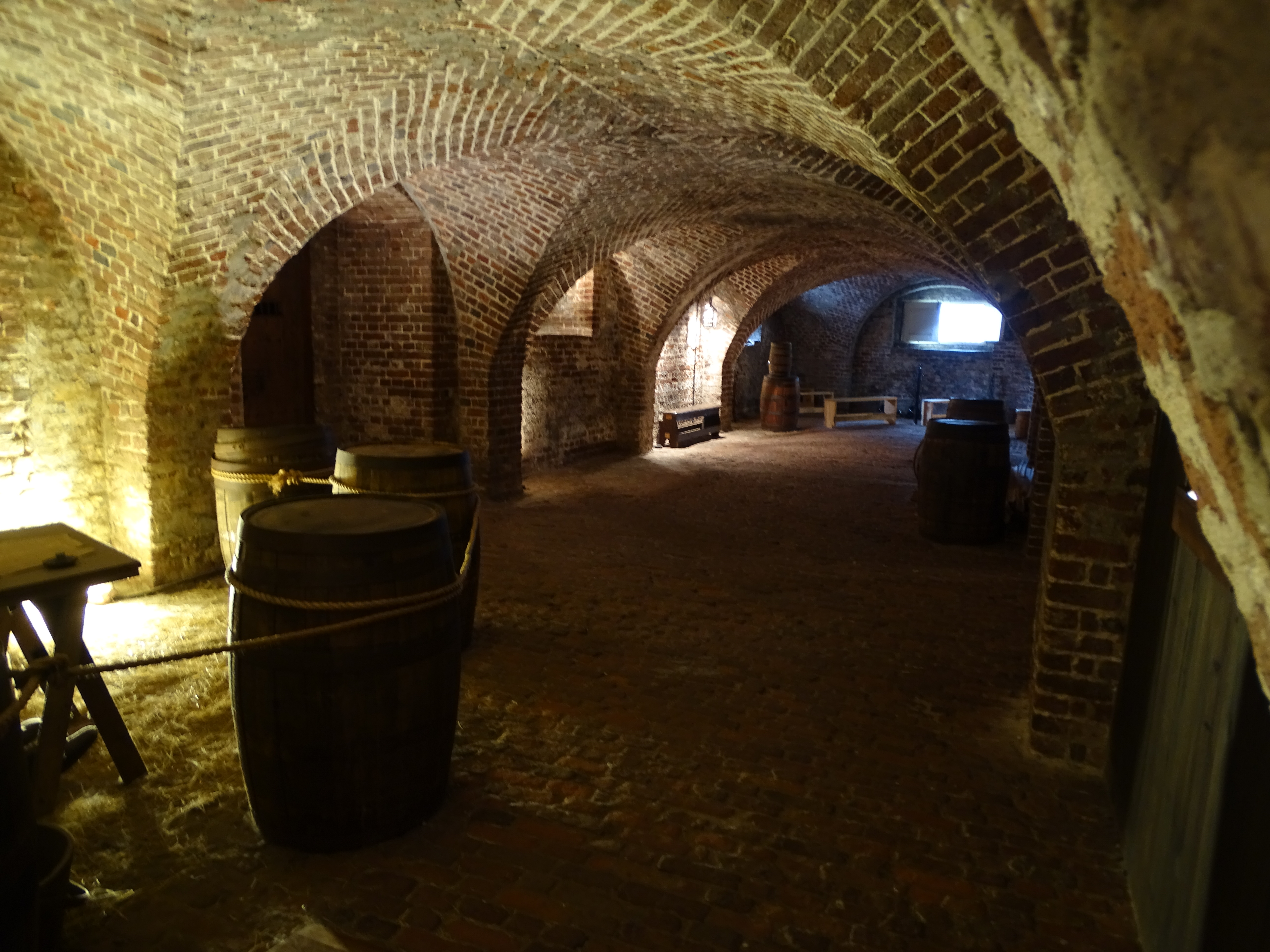 Since 1771, the Old Exchange has prevailed the test of time despite its continuous evolution throughout the last 250 years, where it has filled many roles in Charleston’s civic functions. Now owned by the South Carolina State Society of the Daughters of the American Revolution, the Old Exchange operates as a museum, paying tribute to the building’s significant role in American history. Here, South Carolina made the decision to ratify the U.S. Constitution in 1788.

However, there are rather grisly details of its past, specifically its role in the slave trade, but the harrowing tales come from the Provost Dungeon below. Arches of brick and mortar span the length of the former British military prison where pirates, British soldiers, rebels of the crown, criminals and others found to be disturbing the king’s peace were confined together in wretched conditions. If the dark history itself isn’t enough to spook you, the life-like mannequins in period clothing around the dimly lit basement may. However, some experience a little more than a mere creep factor. According to paranormal investigator and ghost tour guide, Randy Johnson, in his interview on Tony Brueski’s podcast “The Grave Talks Podcast”, strange activity has been reported as early as the 1890s, as accounts of moaning, shrieks of pain and desperate calls for water have all been heard. The barrier chains around the dungeon have been known to sway suddenly and seemingly by themselves. According to Charleston’s Ghost City Tours, there have also been reports of visitors having their hair tugged, being pushed or feeling as though a hand is wrapped around their throat. Spooky stuff.

Get Haunted! How to Take the Tour

Ghost City Tours – Savannah: Join Ghost City Tours Savannah to hear more ghostly tales of America’s most haunted city. “The Grave Tales Ghost Tour” ventures to some of the Hostess City’s most haunted mansions the Mercer House and one of Savannah’s most famous cemeteries, the Colonial Park Cemetery. Visit ghostcitytours.com/savannah to book a tour or call 855.999.9026.

Ghost City Tours – Charleston: One of the most popular ghost tours in the city, Ghost City Tours, offers a family and pet friendly tour on their “The Ghosts of Liberty Tour” where you can discover even more of Charleston’s famously haunted locations like the Powder Magazine. You can still bring your pets, but you’ll have to leave kids at home on their “The Death and Depravity Ghost Tour.” Visit ghostcitytours.com/charleston to book a tour or call 888.876.5806.

Bulldog Tours – Charleston: Explore Charleston’s Old Exchange and Provost Dungeon on the “Charleston Ghost and Dungeon Tour” as well as the infamous Old Jail on their “Charleston Haunted Jail Tour.” If you’re feeling brave, join the “Paranormal Investigation of the Old City Jail,” where you can use a spirit box, EMF meter and a ghost magnet. Check out their newest addition, the “Spirits of Magnolia Cemetery Tour.” Visit bulldogtours.com to book a tour or call 843.722.8687.

Old Savannah Tours – Savannah: Hop on a Grave Encounters Ghost Tour trolley tour for a thrilling and chilling overview of Savannah’s notorious haunted history. Every night of the week, their ghostly guides share blood-curdling tales of murder, voodoo, death, disease and disaster in the Hostess City of the South. Their original ghost tour stands apart as Savannah’s best introduction to the city’s paranormal past. 912.234.8128

Old Town Trolley Tours – Savannah: Unseen spirits stroll among the living in the streets and squares of Savannah – “America’s Most Haunted City!” Hear the tales no other tours dare tell as shadows play tricks on your mind on the Ghosts & Gravestones Frightseeing Tour. Journey through time with exclusive nighttime entry into two of Savannah’s most haunted venues. 855.245-8992