The Southern Side of Hollywood

Georgia knows how to weather a storm and tell a story, and this past year it succeeded at both, to the tune of $4 billion. Despite a pandemic, a production shutdown and several boycott hashtags, Georgia film emerged even more electric, artistic, and profitable than its former, formidable self. 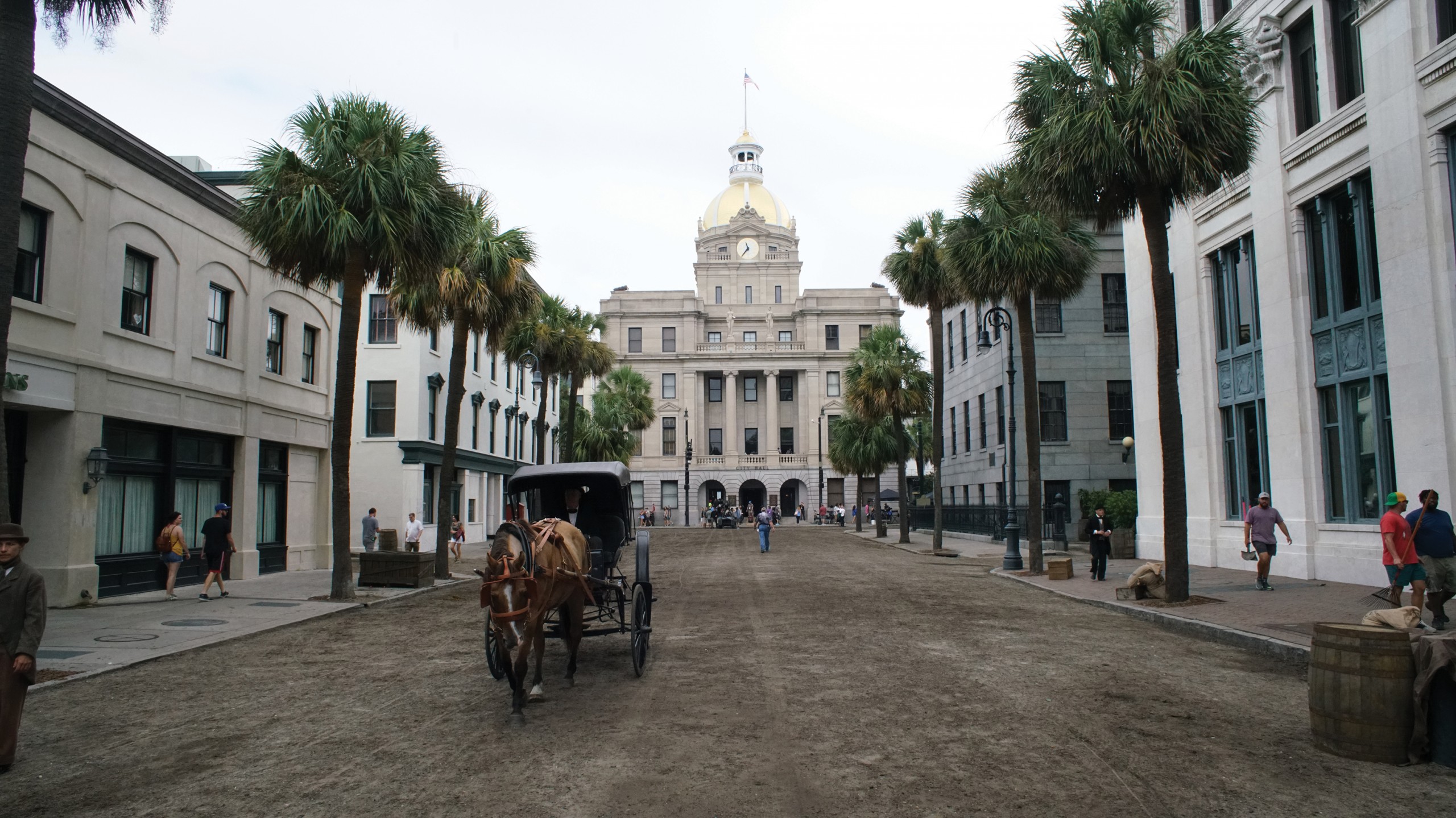 There were only three days of production left on “The Underground Railroad” before the coronavirus forced production to halt. The limited series which filmed all around Ga., took 116 days to complete. Photo / Andy Young

Georgia knows how to weather a storm and tell a story, and this past year it succeeded at both, to the tune of $4 billion. Despite a pandemic, a production shutdown and several boycott hashtags, Georgia film emerged even more electric, artistic, and profitable than its former, formidable self.

Summer 2021, The Georgia Department of Economic Development (GDEcD) announced the film industry recorded a blockbuster year (no pun intended) with 366 productions and a decision from Marvel Cinematic Universe to not only remain anchored but advance, launching 10 titles this year and set to nearly double that with 19 titles on deck in 2022.

For those not fully in the know, Marvel doesn’t just film in Georgia, Marvel wears the Peach State like Tony Stark wears his multitude of armors. And MCU wears it well. WandaVision for instance is dragging 23 Emmy nominations in its wake, when a single Emmy® nod would be a first ever for Marvel Studios. (The state overall pulled in a whopping 62 Emmy® Award nominations from “Georgia-lensed” productions.)

According to a statement from the governor’s office, the bounce back got a head start, “because Georgia was the first state in the country to re-open our economy and worked with film productions across the state to ensure they could safely continue operations, the Peach State’s film industry is leading the nation.”

As the top state for business for an unprecedented eighth year in a row, the jobs, economic development, and investment in film and other supporting industries are a key part of Georgia’s success story.”

So… what did happen to the boycott?

Two things: The cause was taken seriously, and so was the effect.

In early 2021 Will Smith became one of the most visible celeb directors to pack up shop and leave the state in part over Voter Law boycotts and mass hashtagery, leaving behind $15 million in Georgia tax benefits and taking with him more than a few Georgia jobs.

Of those jobs, and the associated economy and crew, Beth Nelson, Executive Director/Film Commissioner at Savannah Regional Film Commission stated, “We’re proud of the people we have working and living here. What we’re trying to do in our office is to build this industry so they will have jobs; it’s about the work and the economic impact to local businesses. When a film production is here, they spend so much locally – on paint, lumber, food, props, set construction. Just about any business you can think of is touched by film while they’re here.”

This sentiment, whether trickle-down, or simply a baton carried equally by all facets of those working in the industry, is echoed with synchronicity, in almost anyone you speak to, filming in Georgia.

William Mark McCullough, born and raised in Savannah, and most known for “Hillbilly Elegy” and his current recurring role on the Netflix series, “Sweet Magnolias,” empathized, “It affected crew – people putting food on table, not actors who go to their cities to film.”

“There are so many TV shows filming in Georgia right now and their production roots are so deep here,” McCullough said. “It’s one thing for a film to pull and decide on a new state, which is a massive undertaking. It takes so much more for an ongoing series uproot; they have locations, studios built, relationships – for them to pull out over whatever political issue may be going on at the moment, there are such massive amounts of time, money, and personal impact involved and invested, it would do more damage than good.”

As summer 2021 comes to a close, both the state and the industry are welcoming back jobs in the tens of thousands with heavy influence on the economy. Just Google “Hollywood of the South” for a sense of the widespread chatter about how “Georgia has taken over the TV and film industry.” This is not a new conversation. Perhaps a surprise to those who think “New York to LA,” it’s something Georgia has seen coming down the road for a country mile. • 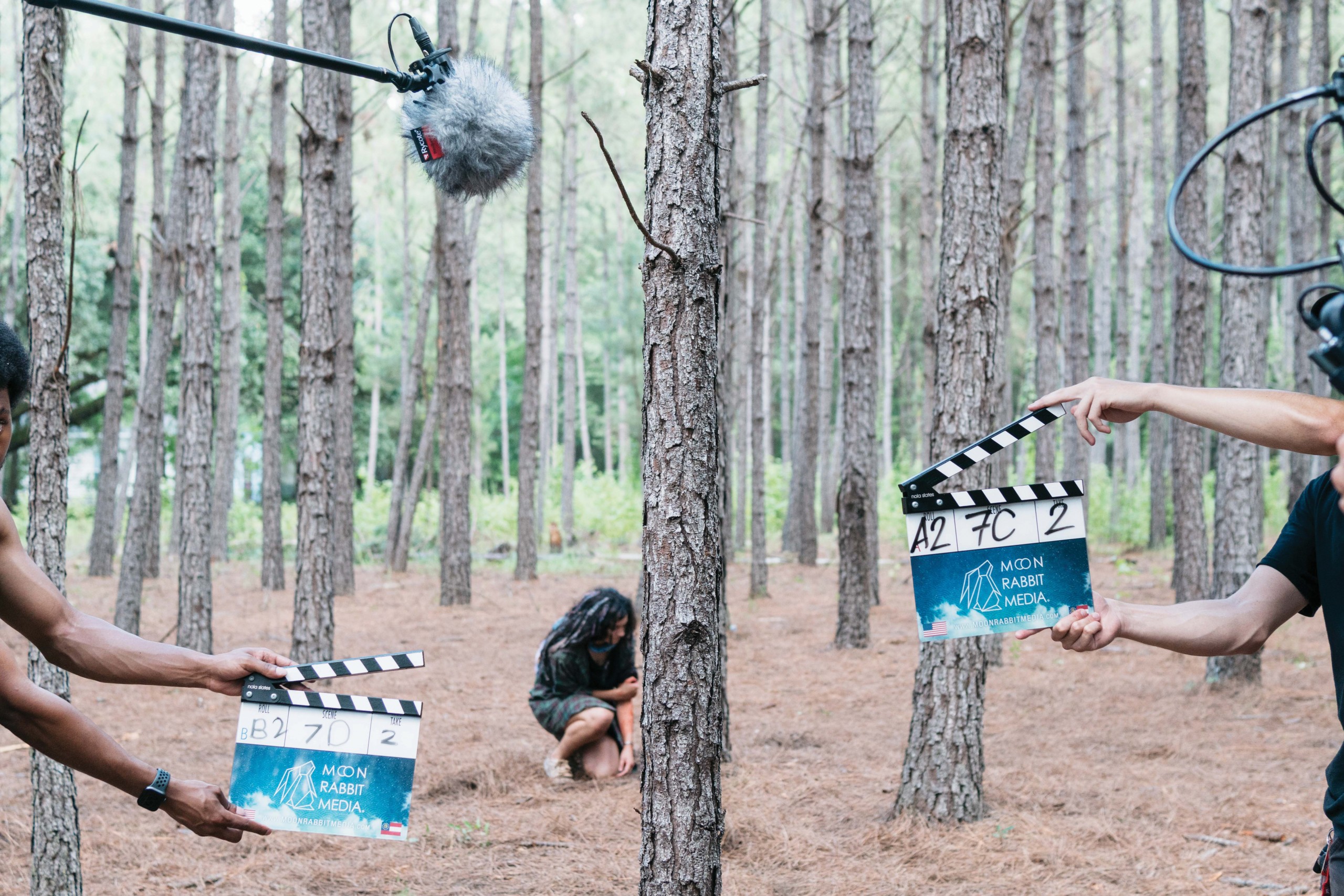 Moon Rabbit Media’s 2021 short film “Pine Grove Vixen” shot in Chatham and Liberty Counties, is a supernatural thriller with two bow hunters who get lost deep in the Georgia woods only to discover that they may not be alone. Directed by 2015 SCAD alumni Seth Johnson. Photo / Jonah Krier 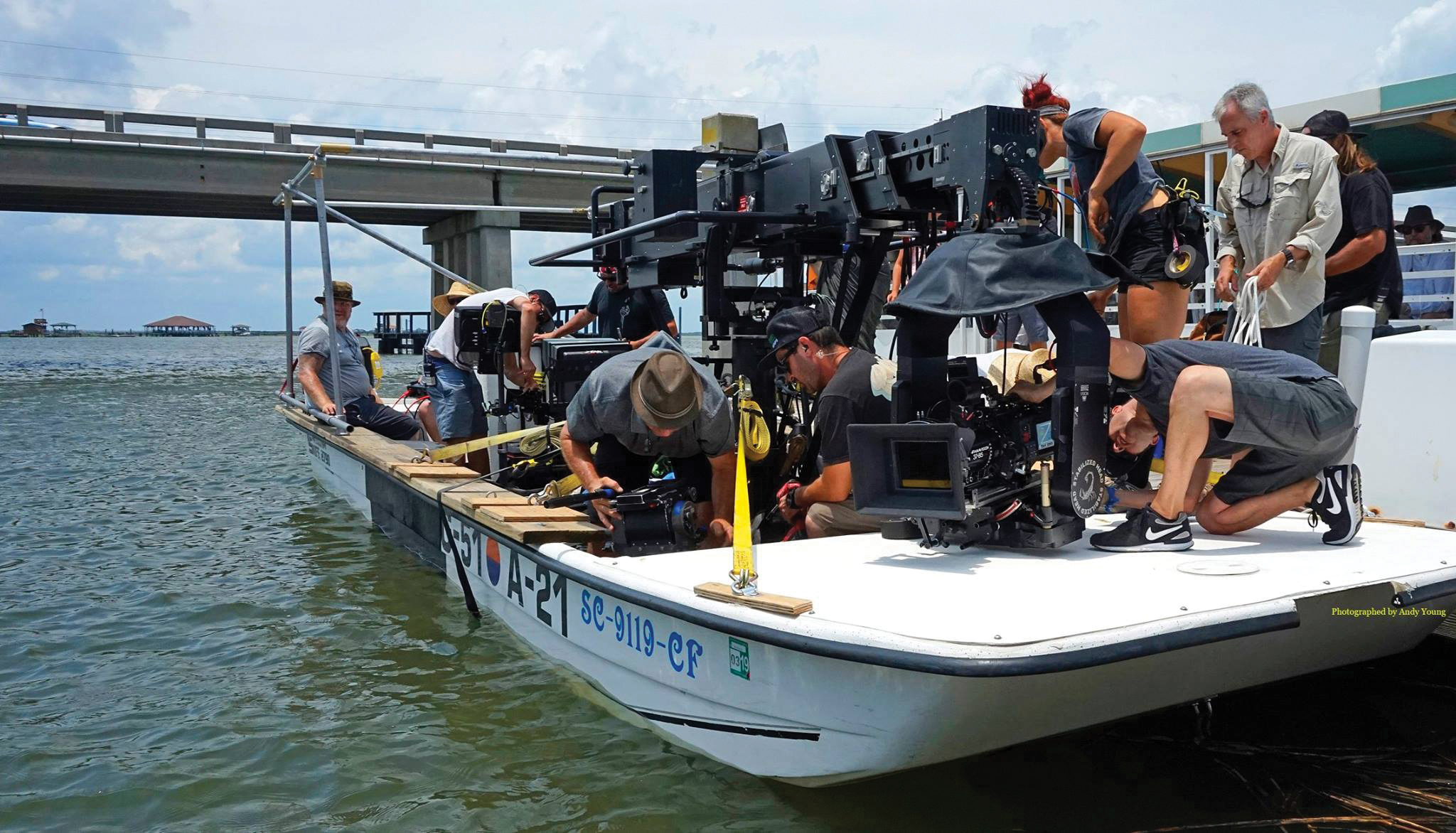 2019’s “Peanut Butter Falcon” camera boat, filming in Savannah in 2017. An adventure story set in the world of a modern Mark Twain. According to the film’s IMDb trivia, during the filming in Savannah, Shia LaBeouf was arrested on public drunkenness charges in the early morning hours. Photo / Andy Young

Georgia film is back in business. Here’s a bit of why, and what you can look forward to.

According to Beth Nelson, Executive Director/Film Commissioner at Savannah Regional Film Commission, people are eager to make up for lost time. Studios are ready to work and produce, and audiences are hankering for their favorite shows to continue. As the industry returns with flourish and fervor, there seems to be no easier or more welcome – more “sellable”– place to do it than Georgia in general and Savannah specifically. 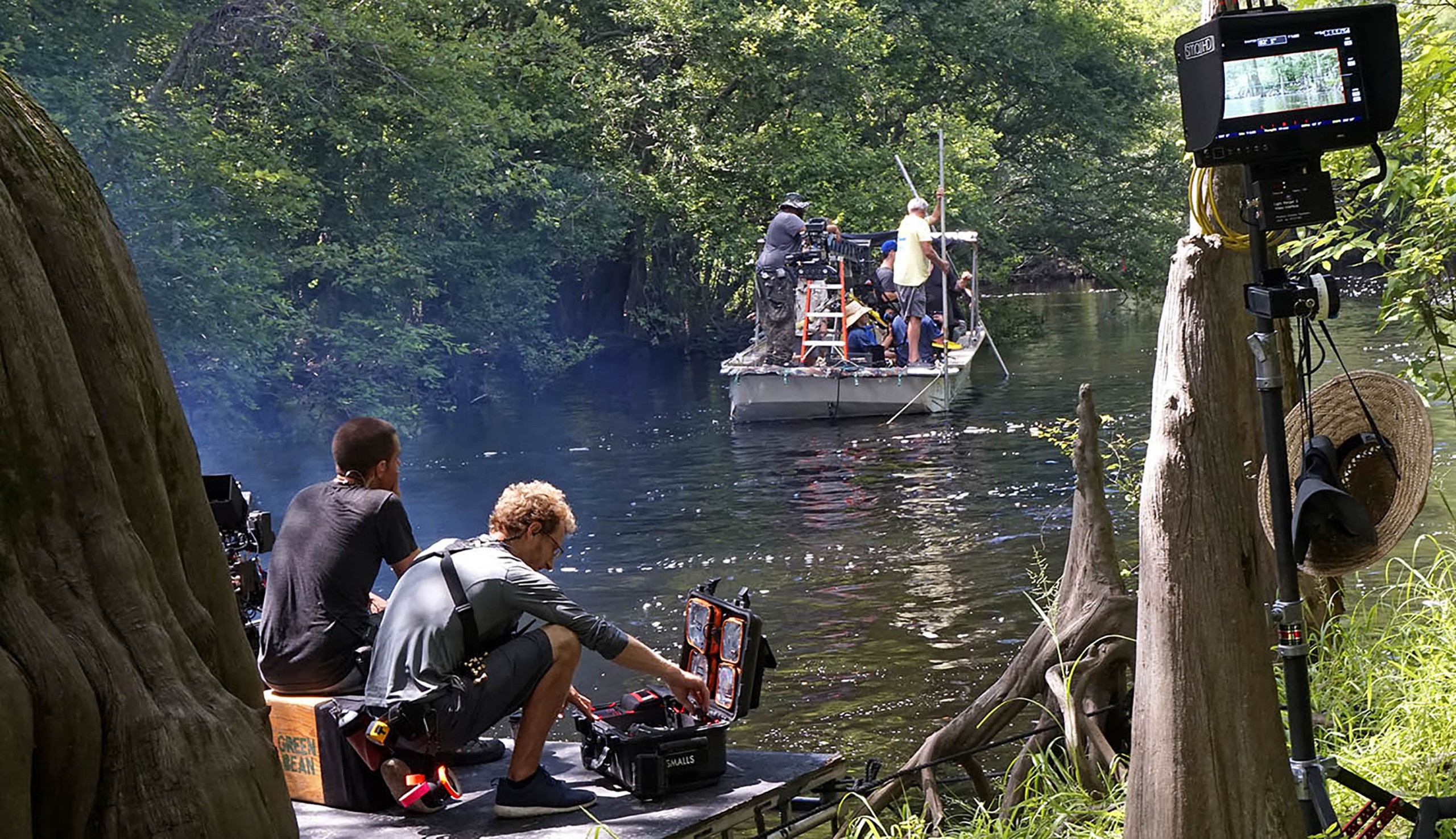 “The number one draw to Savannah for film is its diverse range of locations,” Nelson said. “The biggest historic district in the country, the beach and coast, the rural inland; you can get so much bang for your buck in your location selection. It’s a film friendly community. People genuinely enjoy filmmaking and work closely with all the municipalities in Savannah.”

Asked her favorite part of marketing Savannah, Nelson replied immediately and with a laugh, “How easy it is. We’ve landed several shows because productions would rather be here for five or six months than in a big city or other location.”

From total recall, Nelson goes through a list of what’s filming in Georgia: “The major feature “Devotion” on the Korean War is awaiting release while Gerard Butler’s feature “Chase” is in pre-prod. Independent feature “Lone Star Bull” is in wrap, NBC Universal is prepping to shoot this fall which will be the third series with the studio after “Council of Dads” and “The Act,” and Tyler Perry’s “Jazzman’s Blues” is in post-production set for 2022.” 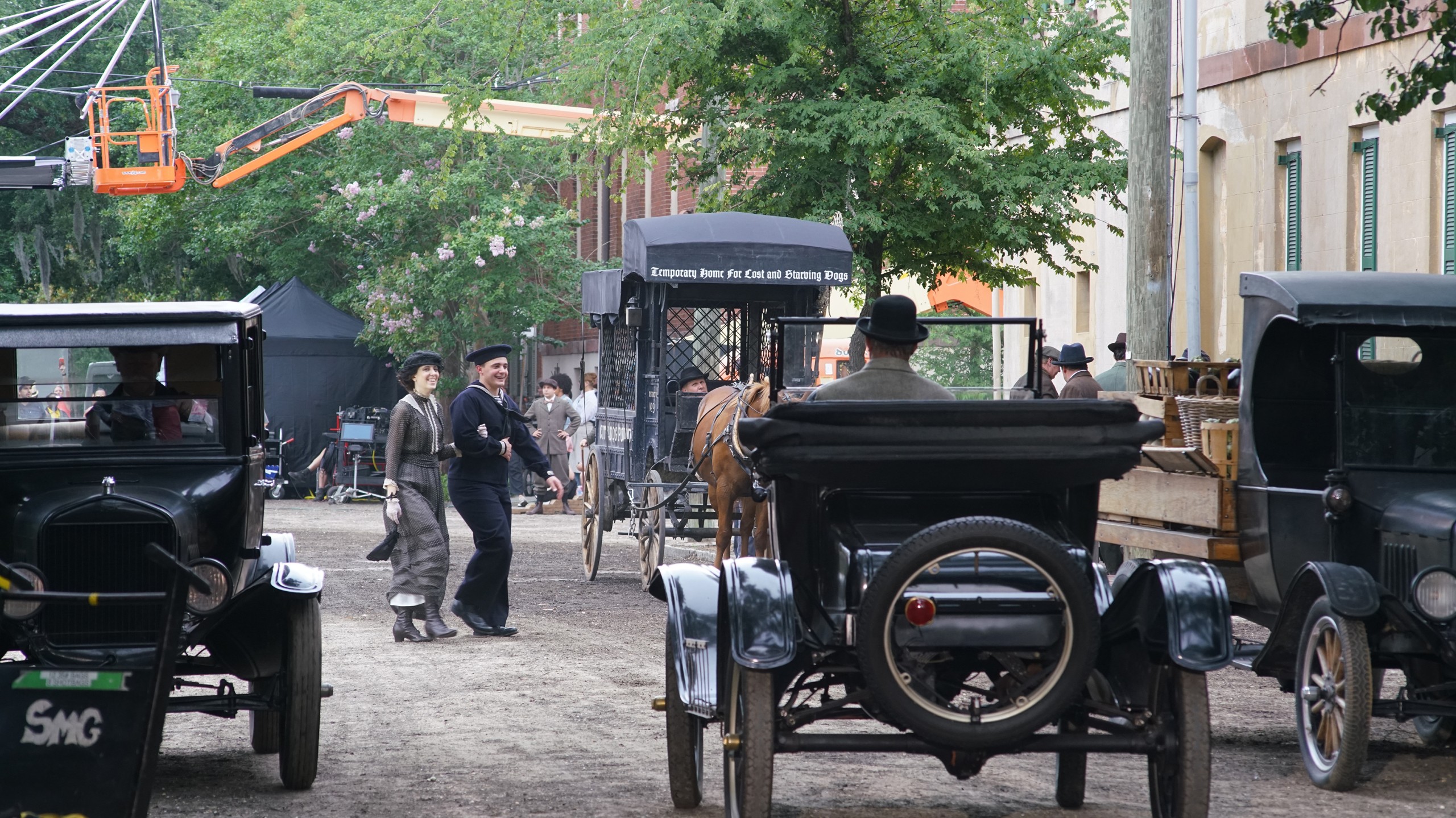 Other highlights in production include, Marvel’s “WandaVision,” “Falcon and the Winter Soldier,” and “Black Panther: Wakanda Forever.” Samuel L. Jackson’s AppleTV Plus series “The Last Days of Ptolemy Grey” wrapped under codename “Memories” shortly before “Black Adam” with Dwayne “The Rock” Johnson. Long range multi-seasons are holding strong: “Walking Dead” season 11, “Love and Hip Hop Atlanta” season 10, Bravo’s “The Real Housewives of Atlanta” season 13, and staples like “Family Feud” and “First 48” are still offering steady production columns. Though not on official lists, there’s enough winking, nodding, and posting to say that “Stranger Things” and “Ozark” are both filming in Georgia, but you didn’t read that here.

Asked for a final takeaway, Nelson celebrated just how much the industry is growing in the state and Savannah specifically, and the “opportunities we have available to our community. We’re really looking forward to our future and watching what happens over the next few years. I think we’re going to see tremendous growth.” • 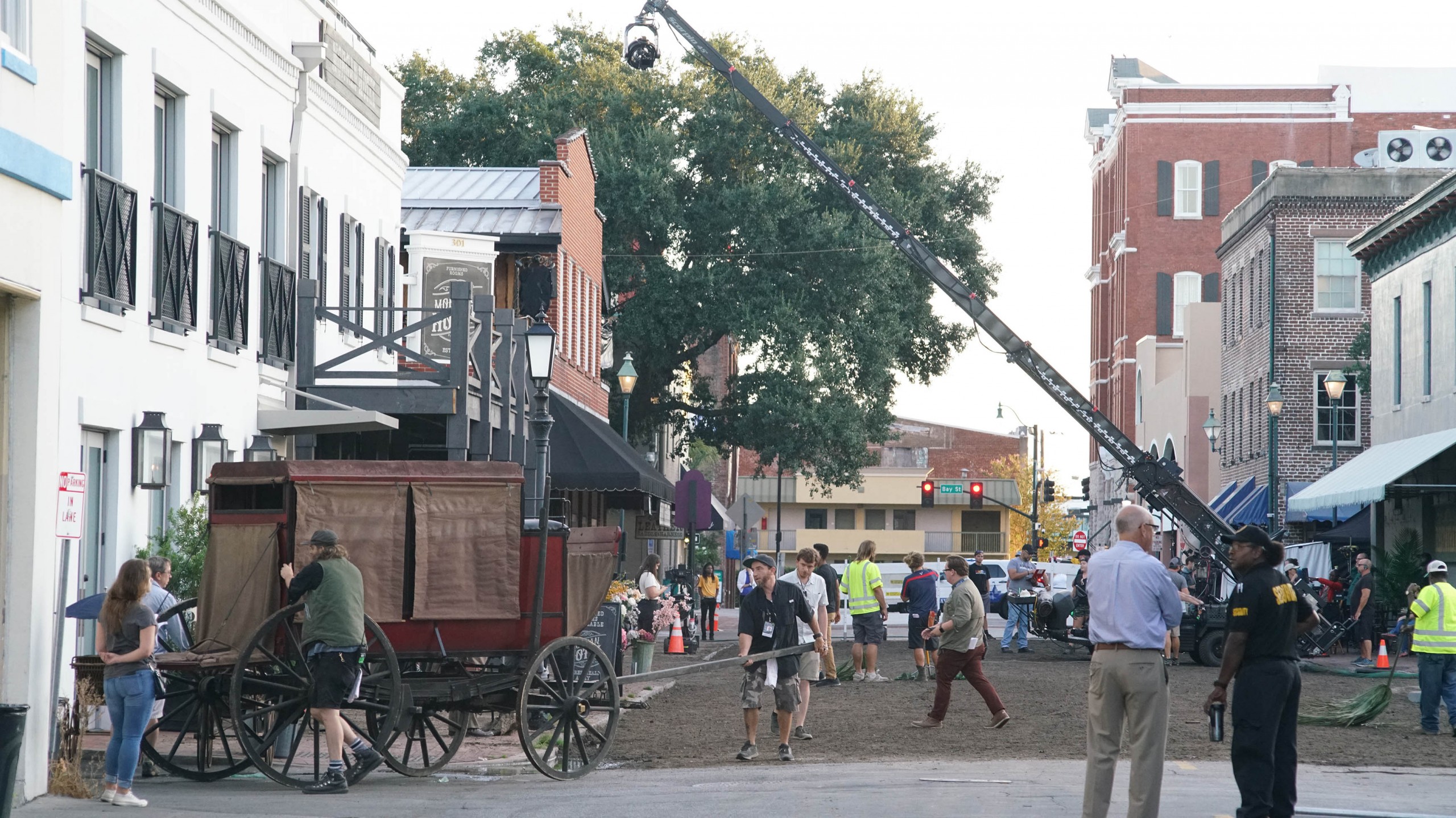 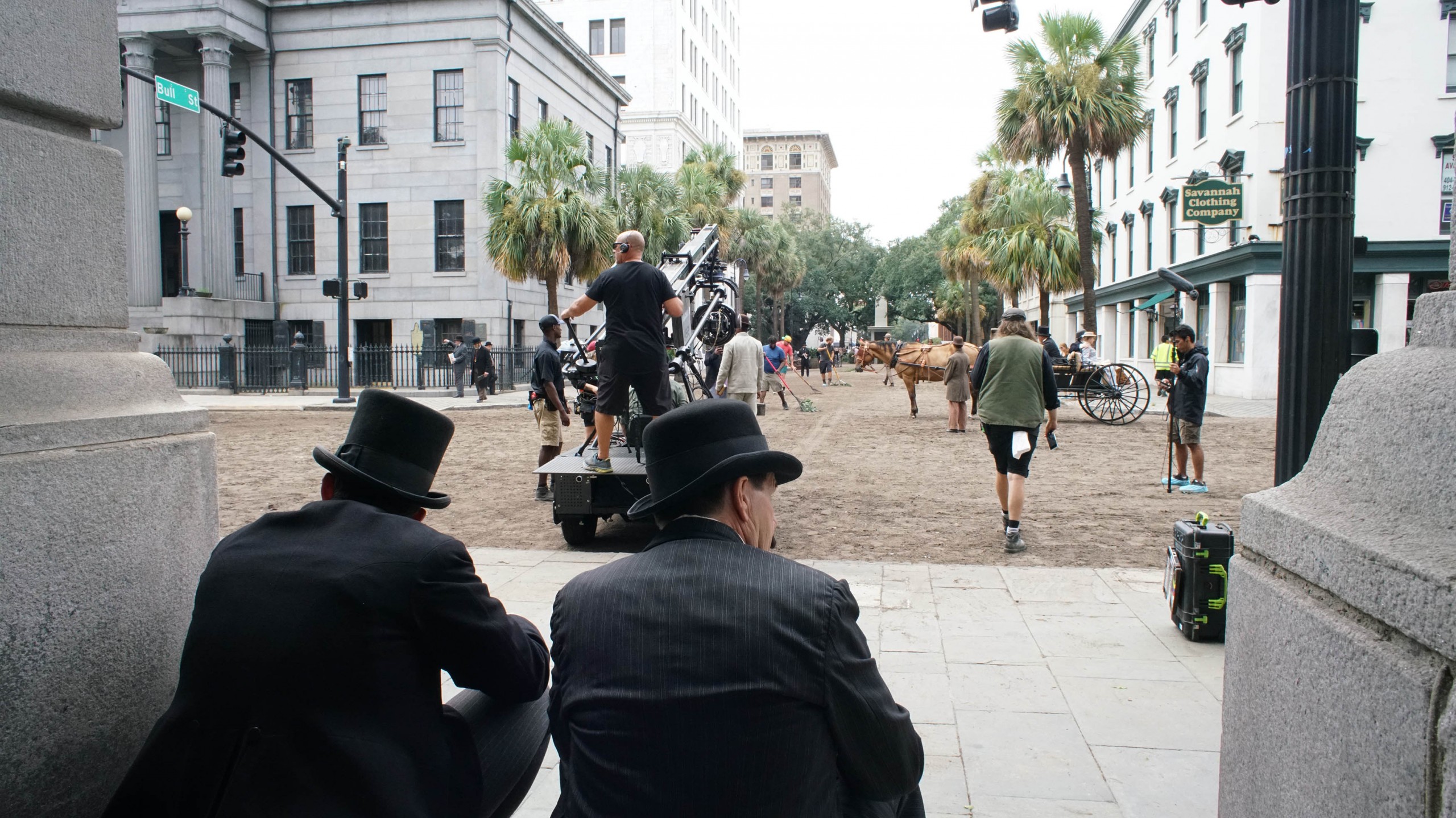 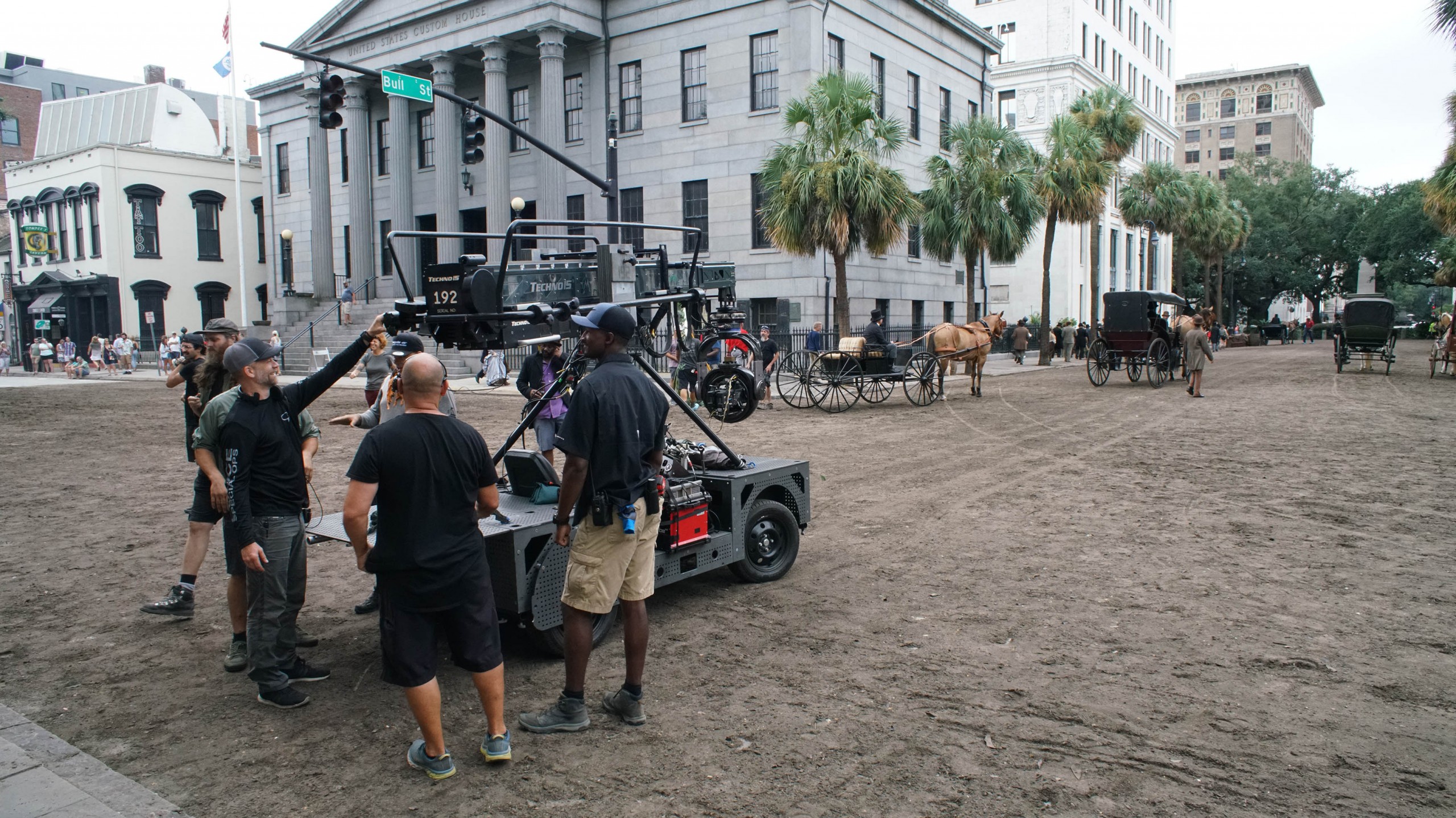