Who knew that a shared experience in college would morph into an international business? George Grant and Paul Hawkins passionately create eclectic art pieces from recycled aviation, automotive, and naval components. From aircraft propellers to V8 engine blocks, Grant and Hawkins keep artistic innovation at the core of their work. With intentional placement of furniture and decor, the duo is taking upcycling to the next level. 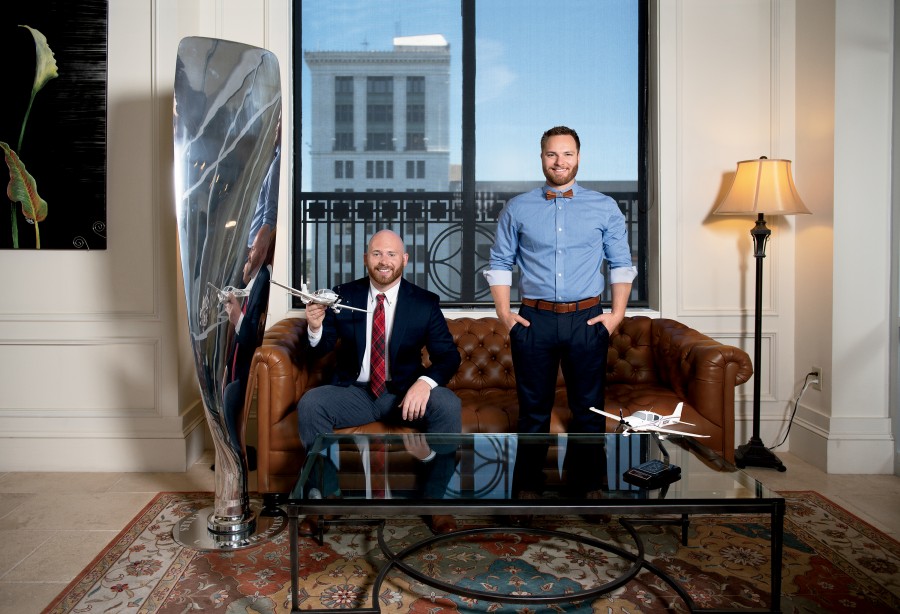 “This company was formed to meld together aviation, automotive, and naval parts as eclectic décor and functional furniture items for both home and office. It was originally an excuse for Johnston to take his son to aircraft salvage yards to look for ‘cool stuff’, but now it’s so much more.”

Who knew that a shared experience in college would morph into an international business? George Grant and Paul Hawkins passionately create eclectic art pieces from recycled aviation, automotive, and naval components. From aircraft propellers to V8 engine blocks, Grant and Hawkins keep artistic innovation at the core of their work. With intentional placement of furniture and decor, the duo is taking upcycling to the next level.

When George Grant and Paul Hawkins met at the Savannah College of Art and Design (SCAD), they had no idea that they were laying the groundwork that would enable them to fly into an epic partnership in the future.

“We were both enrolled in an experimental elective class directed by Professor Aaron Heisler with a group of people from across the spectrum of different majors, ranging from industrial to fashion design. Our directive was to create from a shared experience. That shared experience ended up being a 50 mile hike on the Appalachian Trail, ” said Grant. It was on that trip that Grant and Hawkins first developed an extraordinarily strong bond with each other and the rest of the group, one which still exists today, long after graduation.

Fast forward several years, just days after he graduated from SCAD, Grant received an invitation from Derek Johnston, of MACH 1 Aviation and David Scroggs, owner of Savannah Aviation, to join their hobby-turned-company, Grant’s Handcrafted Collection. “This company was formed to meld together aviation, automotive, and naval parts as eclectic décor and functional furniture items for both home and office. It was originally an excuse for Johnston to take his son to aircraft salvage yards to look for ‘cool stuff’, but now it’s so much more,” said Grant. “Because of the name, I often get asked if it was named after me. However, Derek named it after his son Grant, prior to asking me to join the company. The stars line up in weird ways sometimes.”

George Grant quickly saw the potential of Scroggs’ and Johnston’s business and knew that more design assistance was needed, so Grant reached out to his best friend Hawkins who had since returned home to Montana. “I called Paul back in March because he is an amazing person and a methodical craftsman. We had such a great relationship while in college, he was the obvious choice, and we’ve been building decor ever since.”

From Hawkins’ perspective, it was an opportunity too good to pass up. “I was really excited to work with George again, since we worked so well together in the past, so it wasn’t a gamble for me to move back across the country and help grow this business.”

Grant’s Handcrafted Collection has four partners plus two employees that have begun to establish an international clientele. Grant and Hawkins run the sales and design side of the business while Johnston and Scroggs provide access to hard-to-find parts via their domestic and international network of contacts.

“We have created unique pieces of art for clients in the United Arab Emirates, South Africa, Brazil and the United Kingdom. However, my favorite pieces are those we did for Fontainebleau Aviation in Miami, Florida.” said Grant. “They purchased two polished C-130 propellers and a polished fuselage panel. It was an incredible experience transforming the propellers and panel from scrap to mirror polished art.” 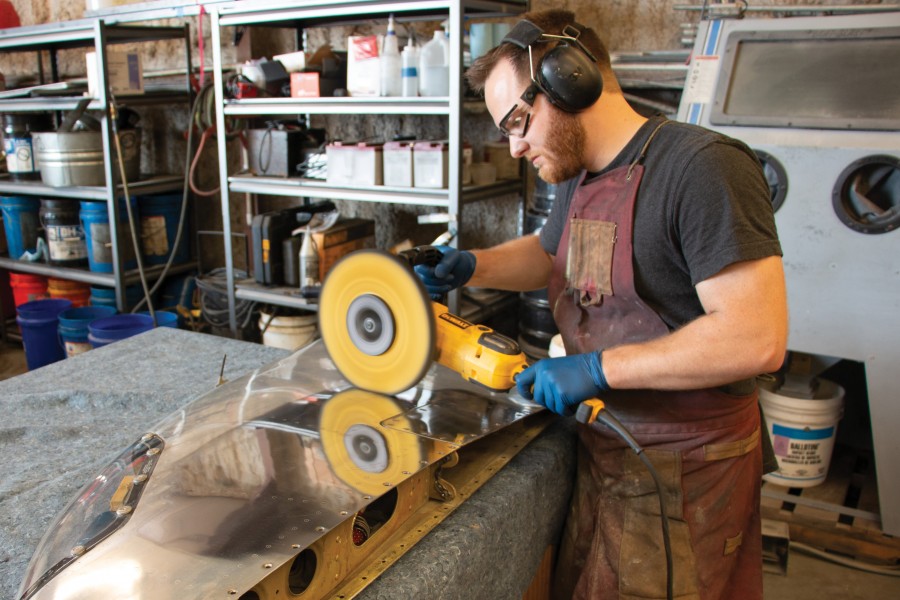 Paul Hawkins polishes a DC9 wing tip he is building into a coffee table. 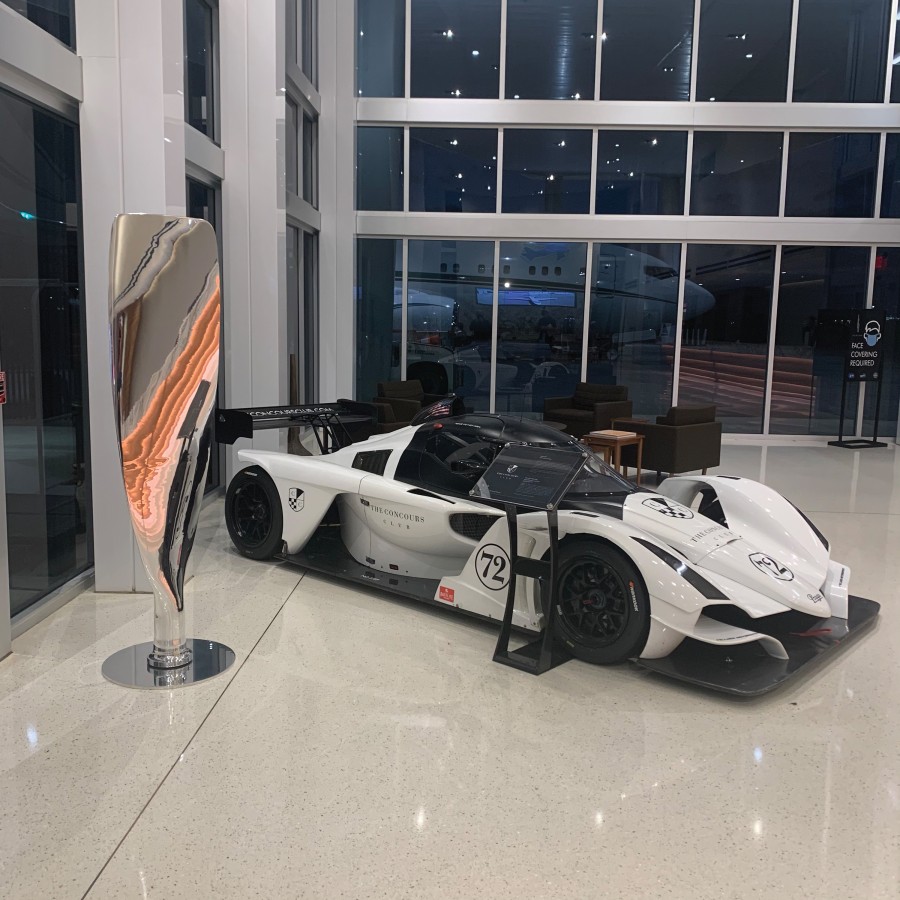 A polished C-130 blade on display in the lobby of Fontainebleau Aviation. 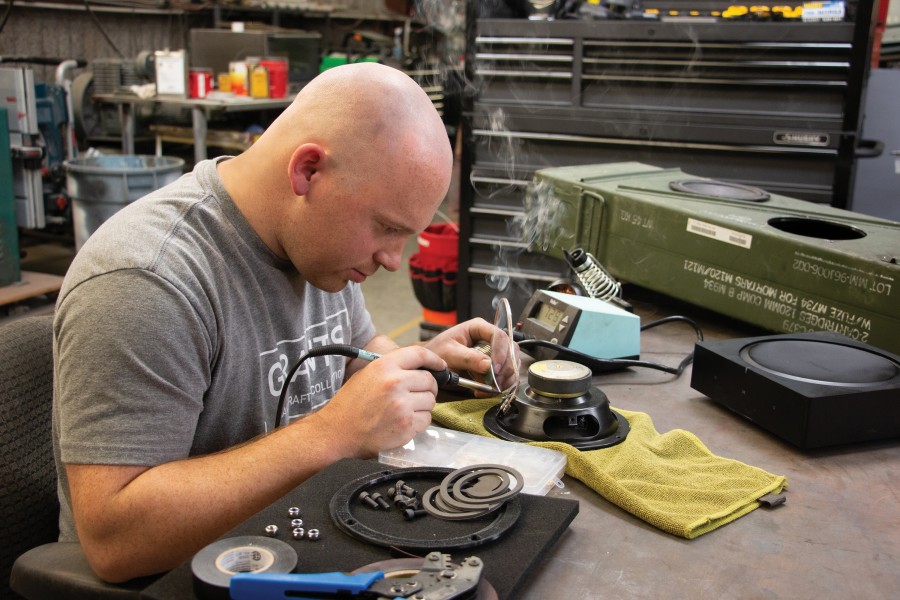 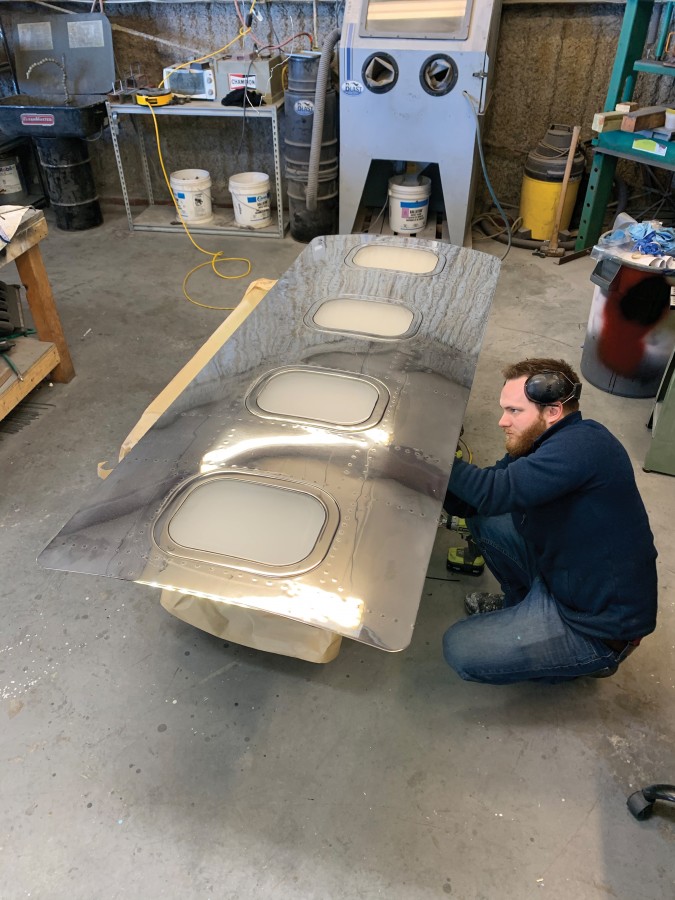 Paul Hawkins polishes a DC9 wing tip he is building into a coffee table.

At the moment, the majority of leads for raw material come by way of Johnston and Scroggs’ previous contacts. “We are trying to find the happy medium between building repetitive items and designing unique products for our more affluent clients, where budget isn’t a concern,” said Grant. One of Grant’s main points of focus is to build the business by making more contacts in both arenas, as both are required ingredients for growing their unique company. “Building custom orders alone is obviously not very efficient when getting a business off the ground, so having repeat items such as the C-130 propeller blades, fuselage panels, and smaller items like instruments are a good way to establish consistency and continuous income,” said Grant.

“George is our main point of contact for clients. So, if the client is interested in having something custom made, they contact George first. He determines the desired function and budget for a piece. Afterwards, he confers with me about the timeline, cost, and scope of the project before sending an estimate to the client. If the client agrees to proceed, I work with George to flesh out the idea of the design, develop a quote and completion deadline. Once we receive a second confirmation of the design, it comes over to me, and I then build the piece,” explained Hawkins.

Their education at SCAD and experiences keep their possibilities nearly limitless. The team works with metals, woods, composites and are expanding into upholstery. “So, let’s say there’s a pilot seat that we want to dress up and turn into a CEO chair, I’ll do the upholstery, refurbishing the foam cushions with the desired leather or fabric,” said Hawkins.

Because of the scale and weight of some pieces, the team also must be extremely cognizant of safety and practice a healthy dose of forethought, by ensuring the piece can be adequately installed and secured in the spaces where it will be displayed. For a recent project the team had to design a special wall bracket to carry the weight of a three bladed prop. “These items can be very heavy, so we have to take extra steps to make sure that anything we build—especially if it is going to be hanging over someone’s head—is structurally sound and secured in place,” said Grant.

While Grant’s Handcrafted Collection intends to stay a boutique-style business, they do have plans to expand. They plan on bringing aboard an interior designer and shipping specialist later in the year. They also hope to develop several lines of specific pieces that can be mass produced, which will eventually require a supply chain specialist.

In any conversation with Grant and Hawkins, their passion for design is always front and center. They spend many hours on the creative process, often until late at night. “We bounce ideas off each other all day and even after work until we say, ‘Hey, I gotta sleep… for like a few hours,'” joked Grant. However, they are both quick to agree that a balanced lifestyle also requires time for fun. While the duo agree on hanging out downtown, and travelling to places like Charleston, Jacksonville and Miami, when it comes to deciding where to go for pizza, there is always a split decision between Vinnie Van Go-Go’s and Huc A Poos. In the end, one category is for certain: they always come back together and agree on sweet tea as their favorite beverage.

Although Hawkins hails from Montana, he is fast becoming a dyed in the wool southerner. Grant is expanding his southern roots from South Carolina and both men wax eloquent about the beautiful city of Savannah. So, it seems that Grant’s Handcrafted Collection is on course to become a fixture of its own in town, with plans for propelling their boutique business far into the future. For a unique handcrafted piece of your own, call George at 912-421-5151. You can check out their work on grantshandcrafted.com or their Instagram @grants_handcrafted_collection. •

The Ins and Outs of Pet Insurance