“Y’all Gonna Lose!” The War for the Oar 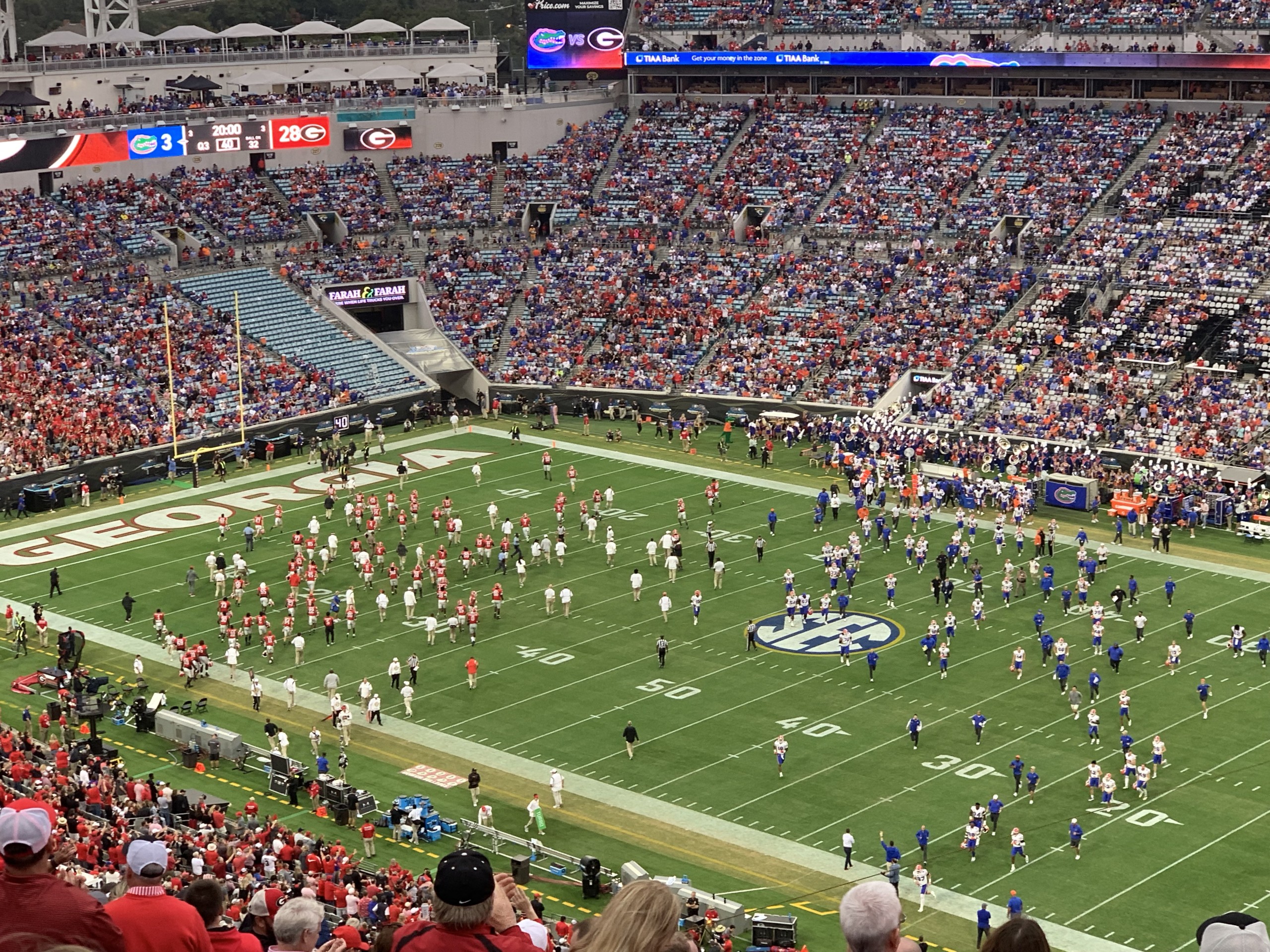 “Y’all gonna lose!” whistled playfully through the air like a cat-call through a crosswalk early Saturday morning downtown Jacksonville, Florida, ahead of the annual rivalry game between the University of Florida Gators and the University of Georgia Bulldogs.

A total stranger heckled the crowds in an endearing show of loyalty to their Florida Gators on the downtown streets of one of the South’s oldest cities. It wasn’t intended to be catty or mean-natured, but instead a comical taunt with one cowboy tipping his hat to another in acknowledgment of the battle soon to come that afternoon at TIAA Bank Field, home during the day to the Jacksonville Jaguars. 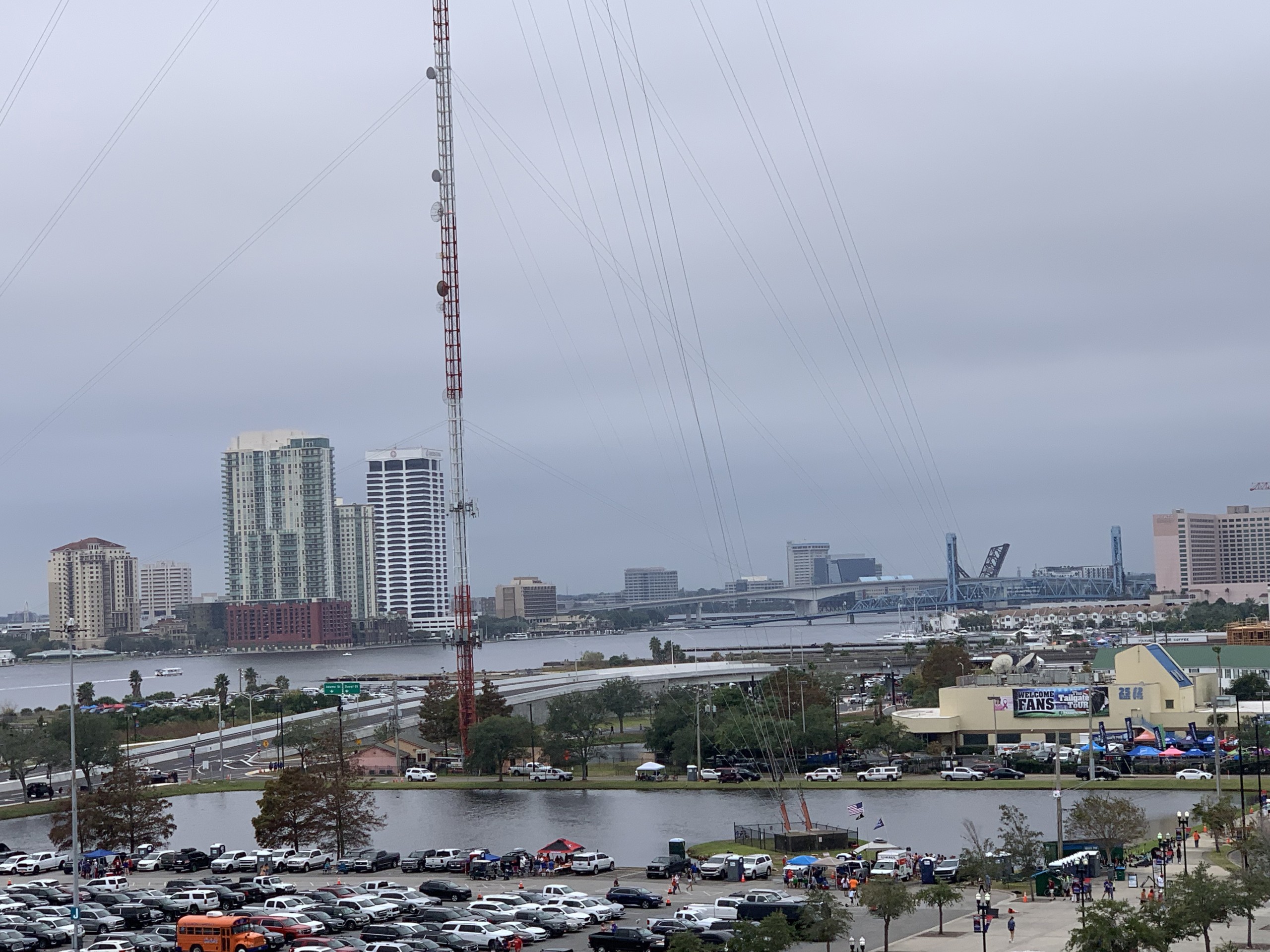 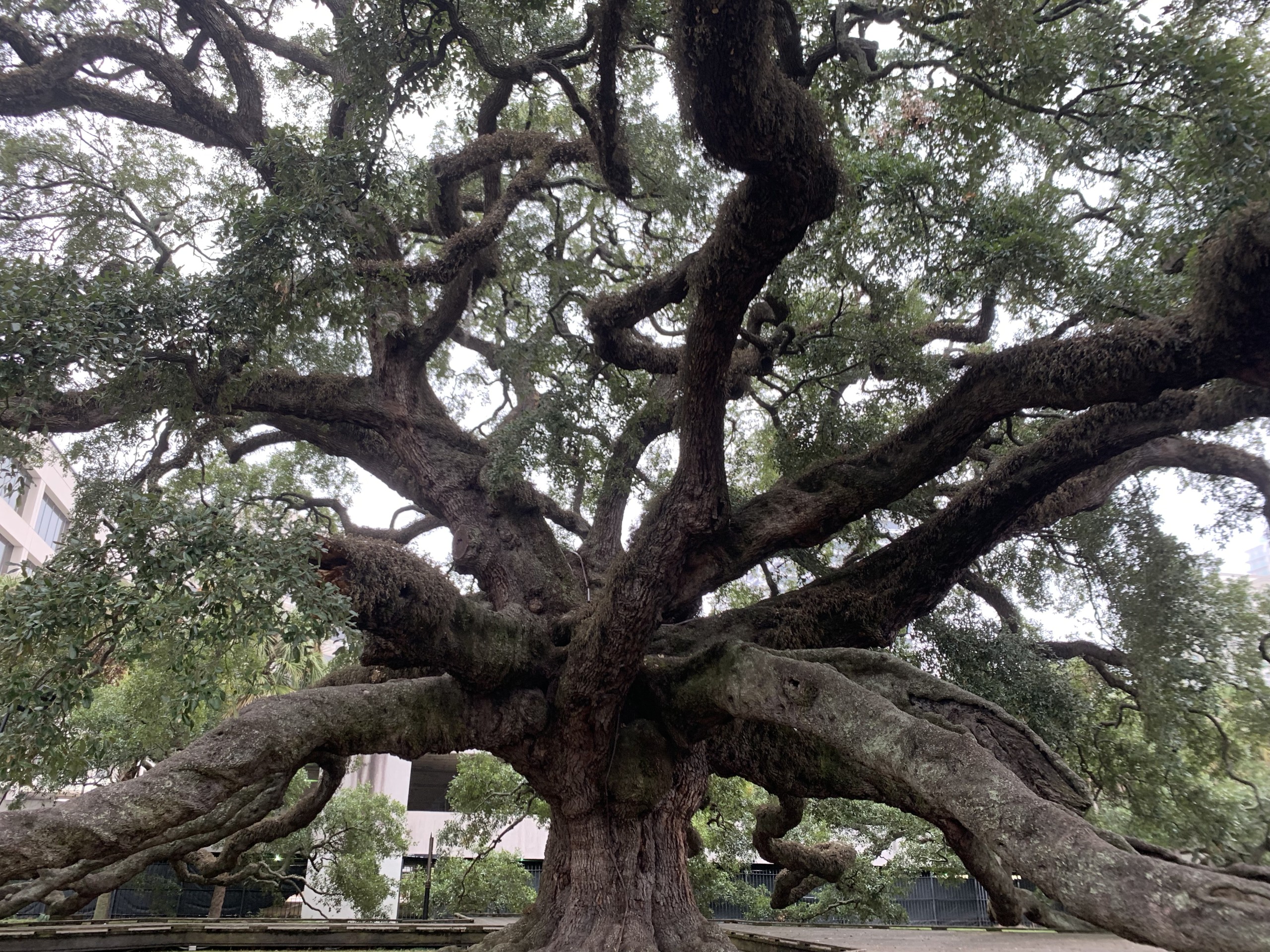 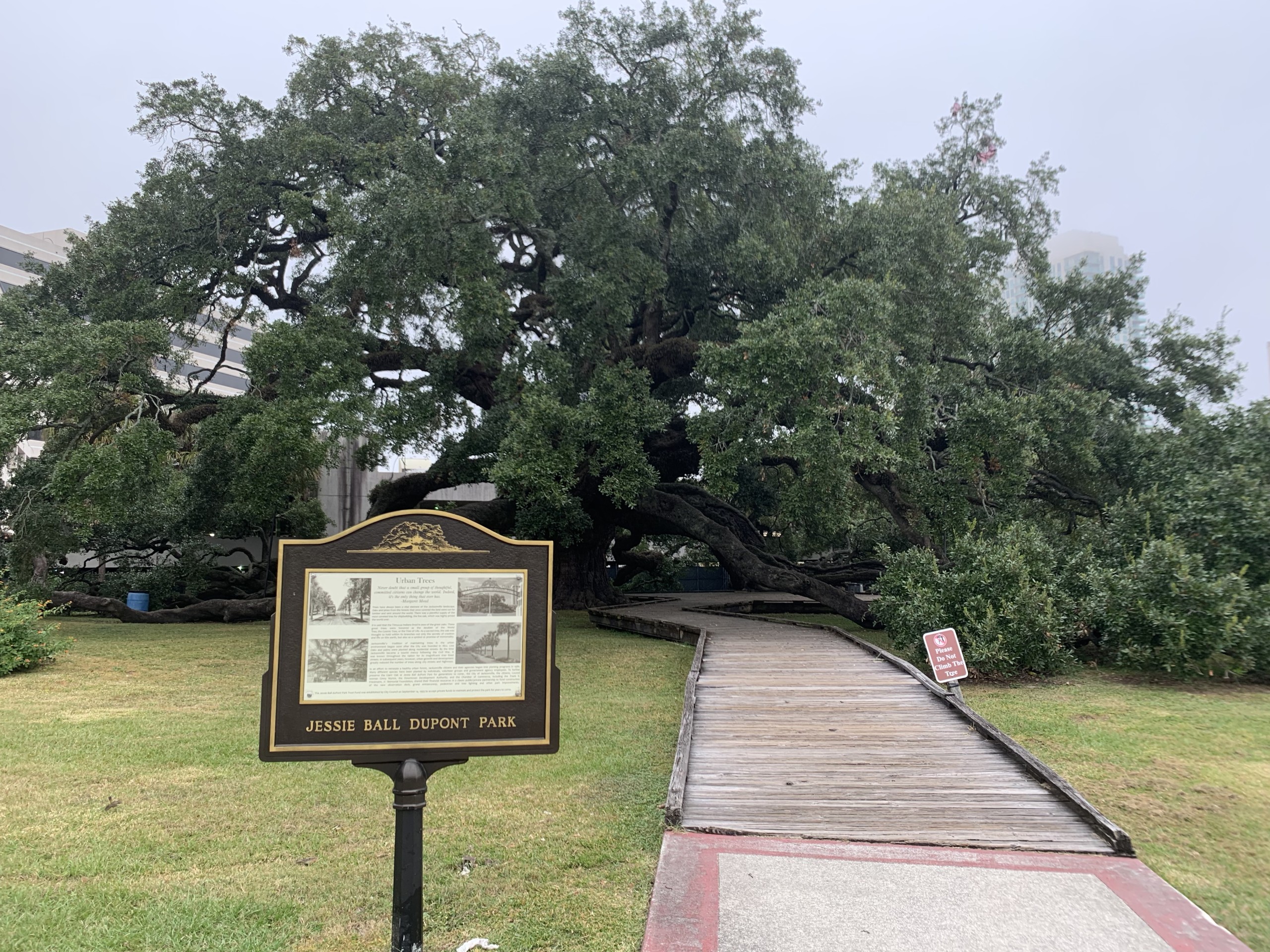 A quick stop by Jessie Ball DuPont Park along the walk to the stadium is the infamous Treaty Oak. Its awe inspiring grandeur is a humbling treasure to witness. Saved by a private group of individuals with a fictitious story about peace treaties that occurred beneath it back in the 1930’s, the Treaty Oak is now a beacon to Jacksonville’s resilience and sense of community. 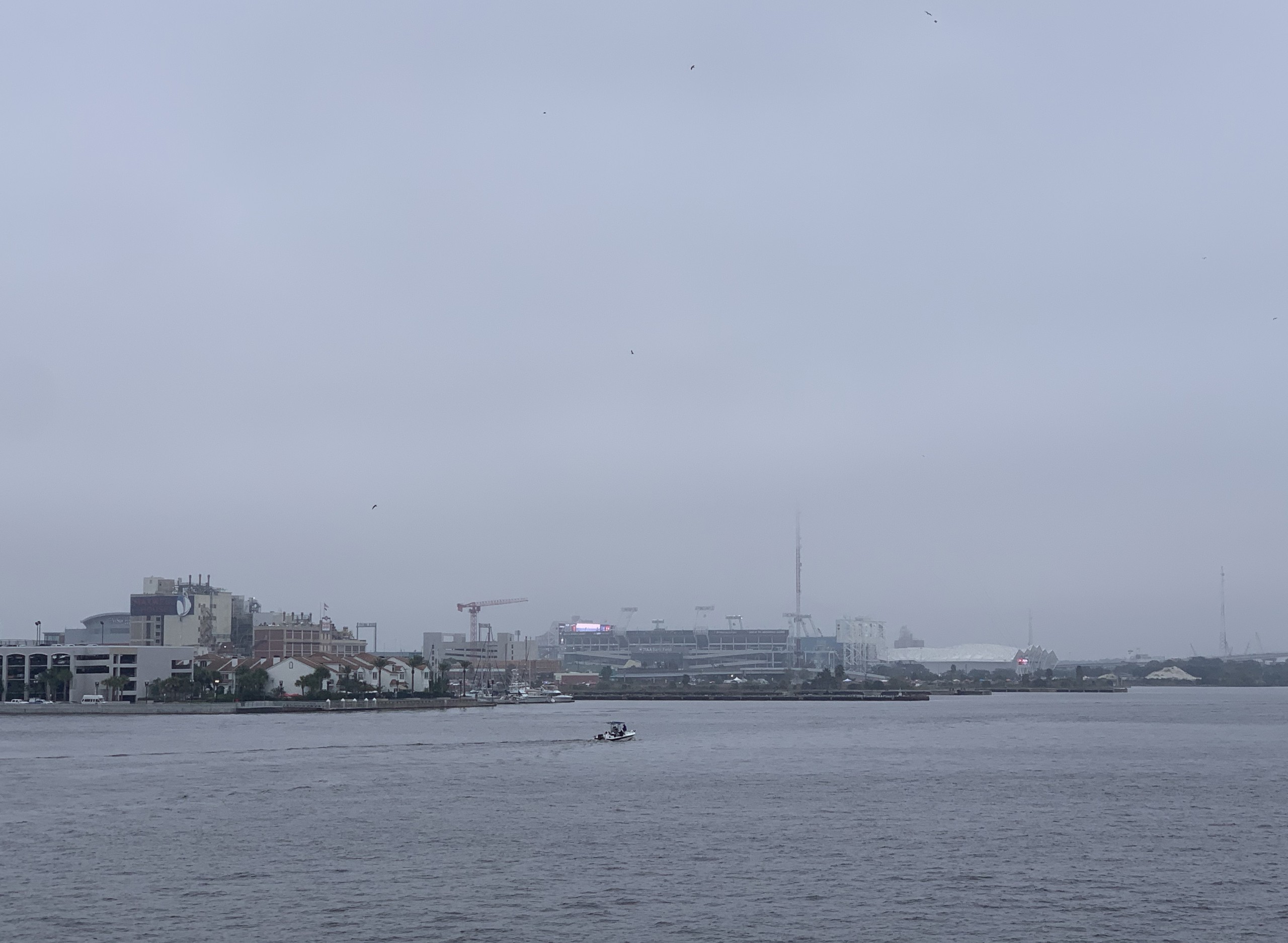 Continuing over the breezy Skyway Bridge headed to the stadium, fans on both sides were instantly greeted with a sea of red and black, orange and blue tailgaters. Sequined skirts, cowboy boots, t-shirts, flip flops, jeans and jerseys flooded the streets and tailgating areas along the Southbank Riverwalk on the St. Johns River. The smell of a backyard bbq filled the foggy air as spectators set up tables lined with potluck cuisine, coolers lining the back of pickup trucks flying Florida and Georgia flags. 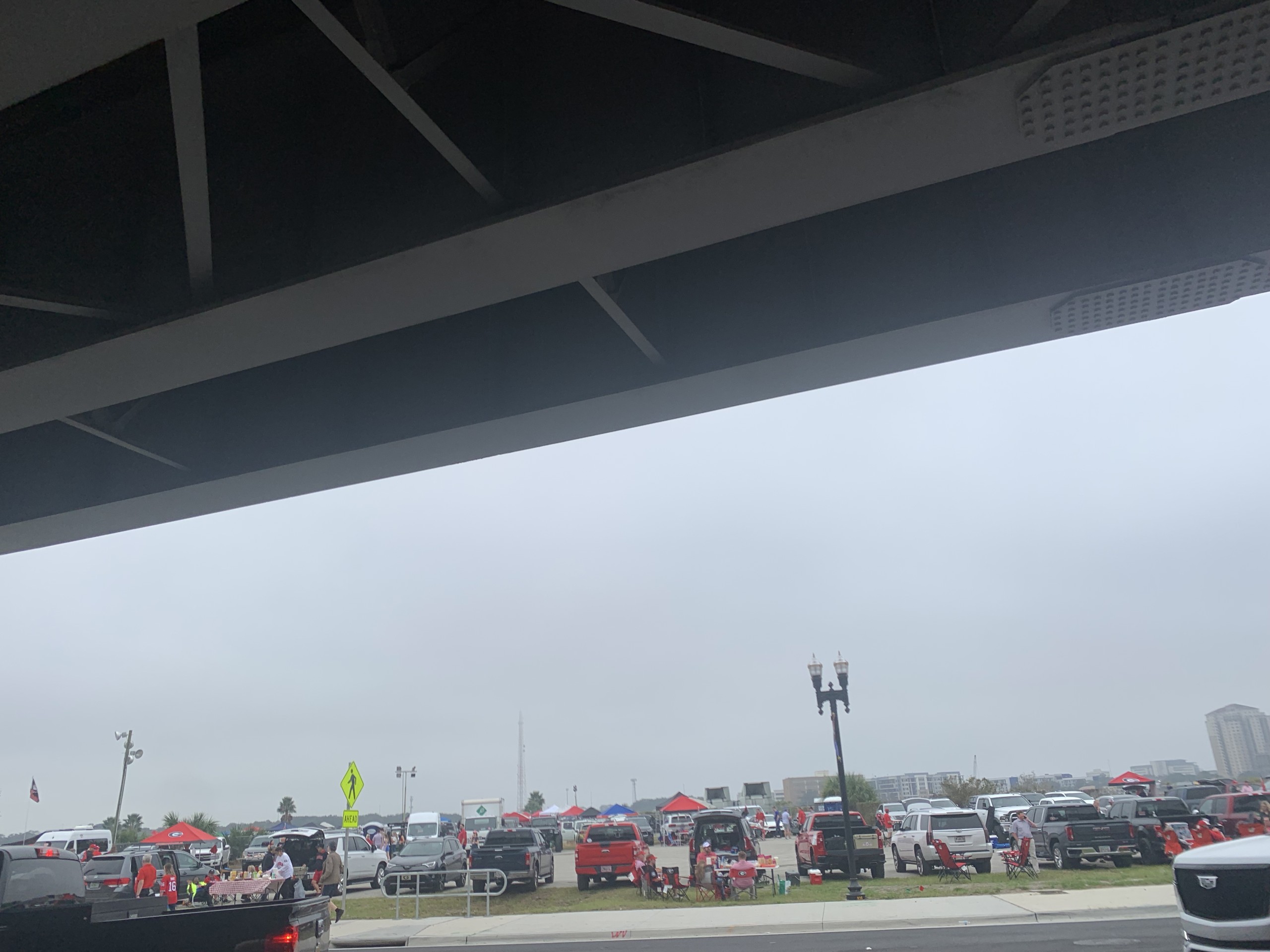 Tailgating in a lot, downtown Jacksonville.

This time of year, downtown is buzzing as thousands of college football fans geared up for the most anticipated game of the year. The iconic and timeless football powerhouses don’t agree on much – even the status of the first game is disputed. Depending on who you ask, the inaugural match was played in either 1904 or 1915, and has been played every season since 1926 (with the exception in 1943 during WWII.) The city of Jacksonville has been the neutral host for both teams since 1933, this common ground helping draw thousands of visitors and college fans to the Atlantic coast annually to the largest city by landmass in the United States, four times the size of Manhattan. 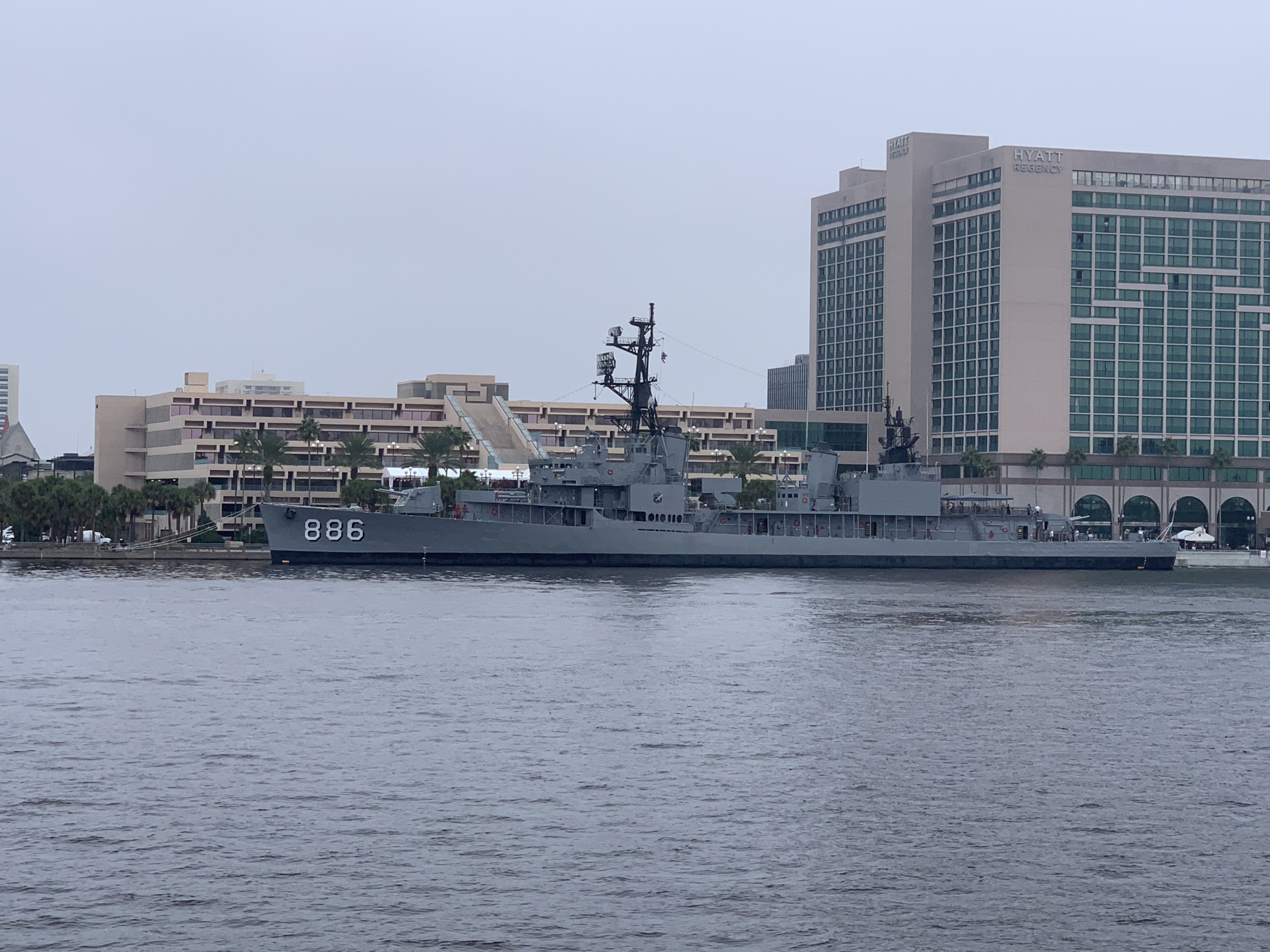 The USS Orleck on the St. John’s River.

RV’s show up in droves a week in advance in anticipation of the red and blue duel as hotels prepare for sold out rooms. There’s just as much going on outside the stadium as there is inside, formerly known as the “World’s Largest Outdoor Cocktail Party,” (coined in the 1950’s by a sports editor who witnessed a drunk fan offering an on-duty police officer an alcoholic beverage). The name stuck until 1988 when a series of alcohol-fueled debauchery caused the city to drop the official usage. But unlike the dropping of the official name, the cocktails stayed. 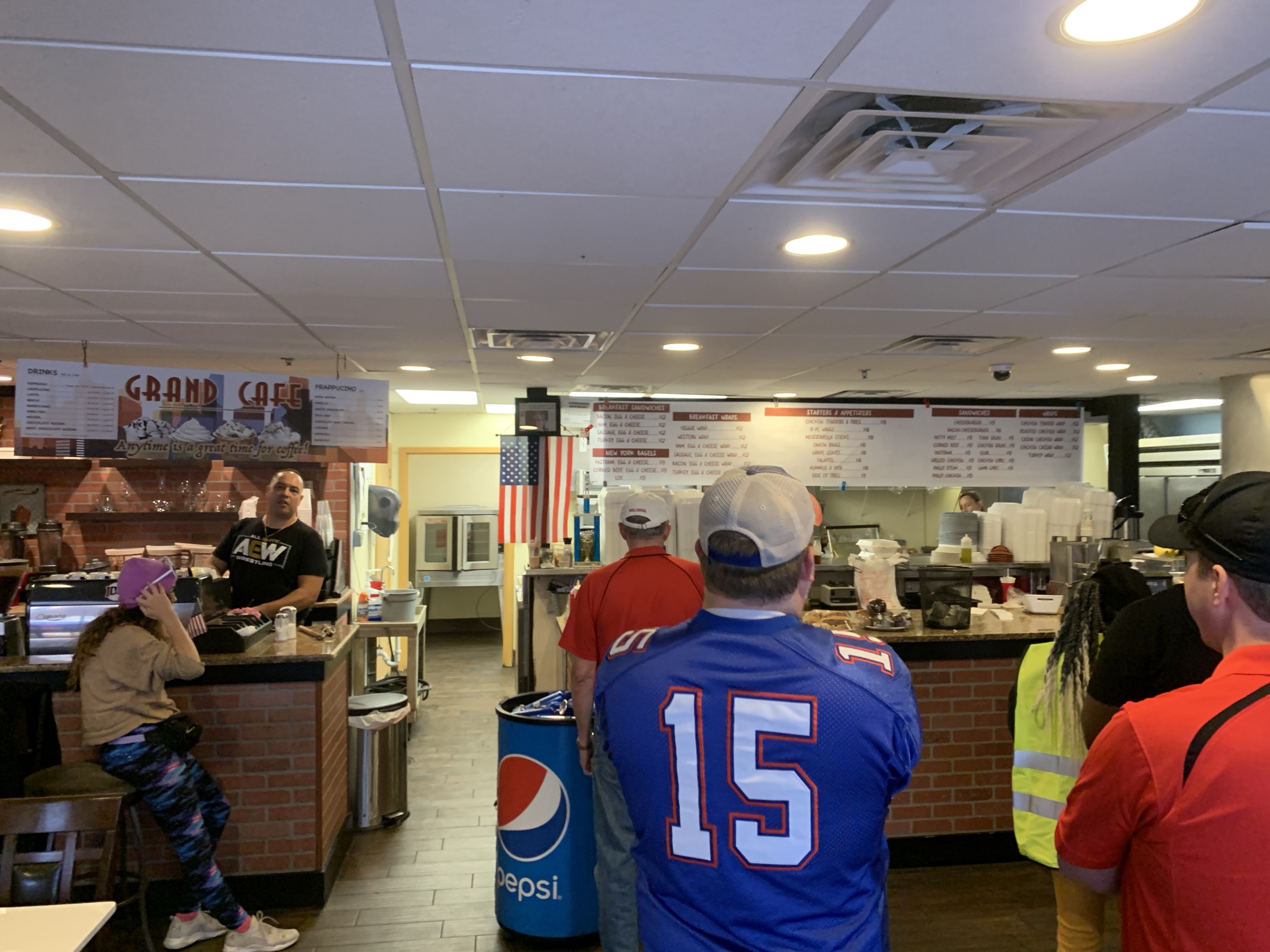 Around the corner, D&G Deli and Grill touted as “the only true Deli & Grill in Downtown Jacksonville,” for banging New York style bagels with pastrami, egg and cheese and Bud Light “roadies.” This is one of the few days patrons and visitors can enjoy a cocktail “a-la Savannah style” and walk the streets sipping adult beverages while weaving through pre-game activities, living up to Jacksonville’s motto, “it’s easier here.” 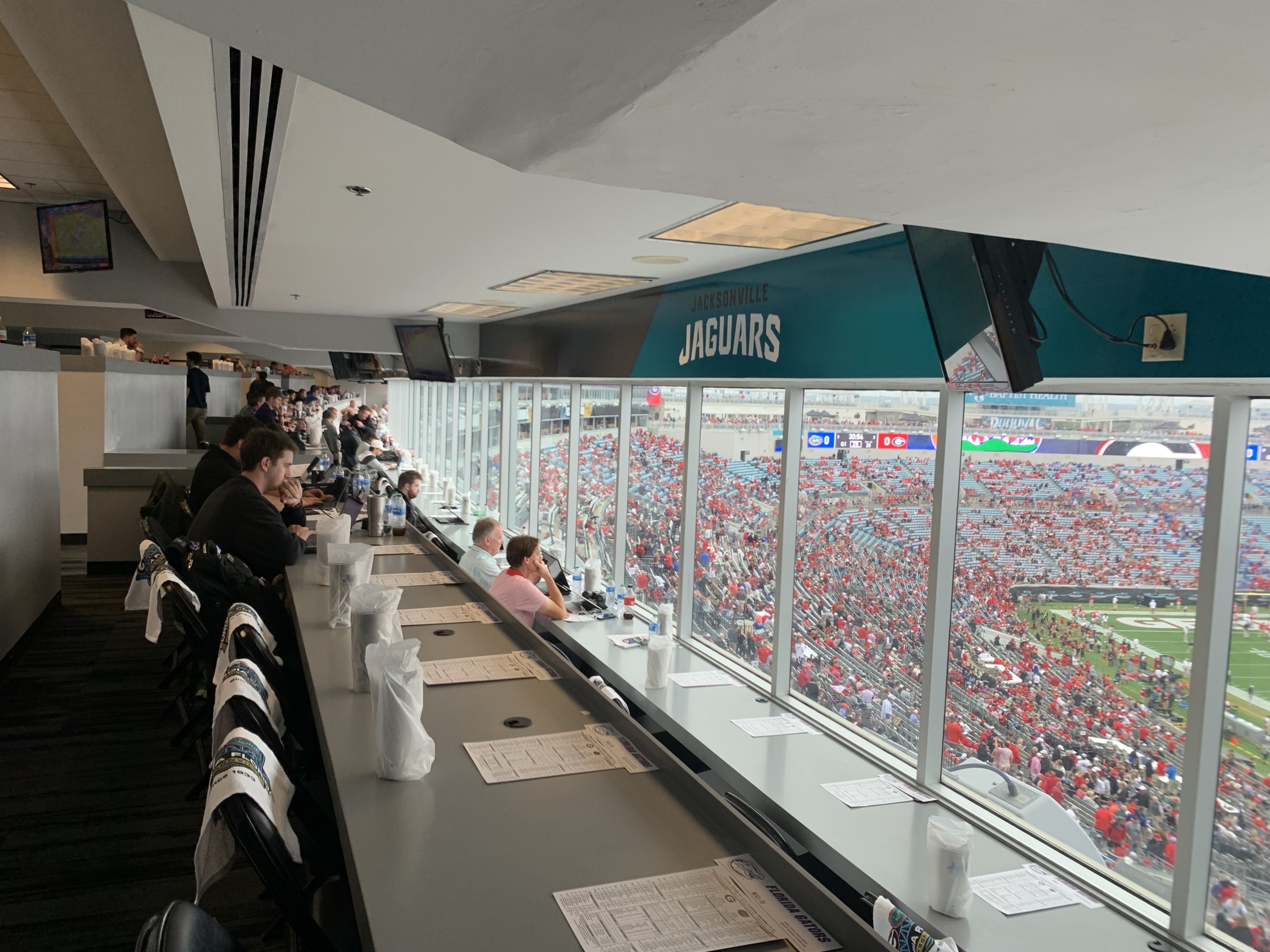 Tailgating is not restricted to just parking lots, even churches get in on the fun, opening empty fields next to their properties to fans and their picnic spreads. And sans-beverages, even church restrooms were available for the public in a family-friendly show of community. 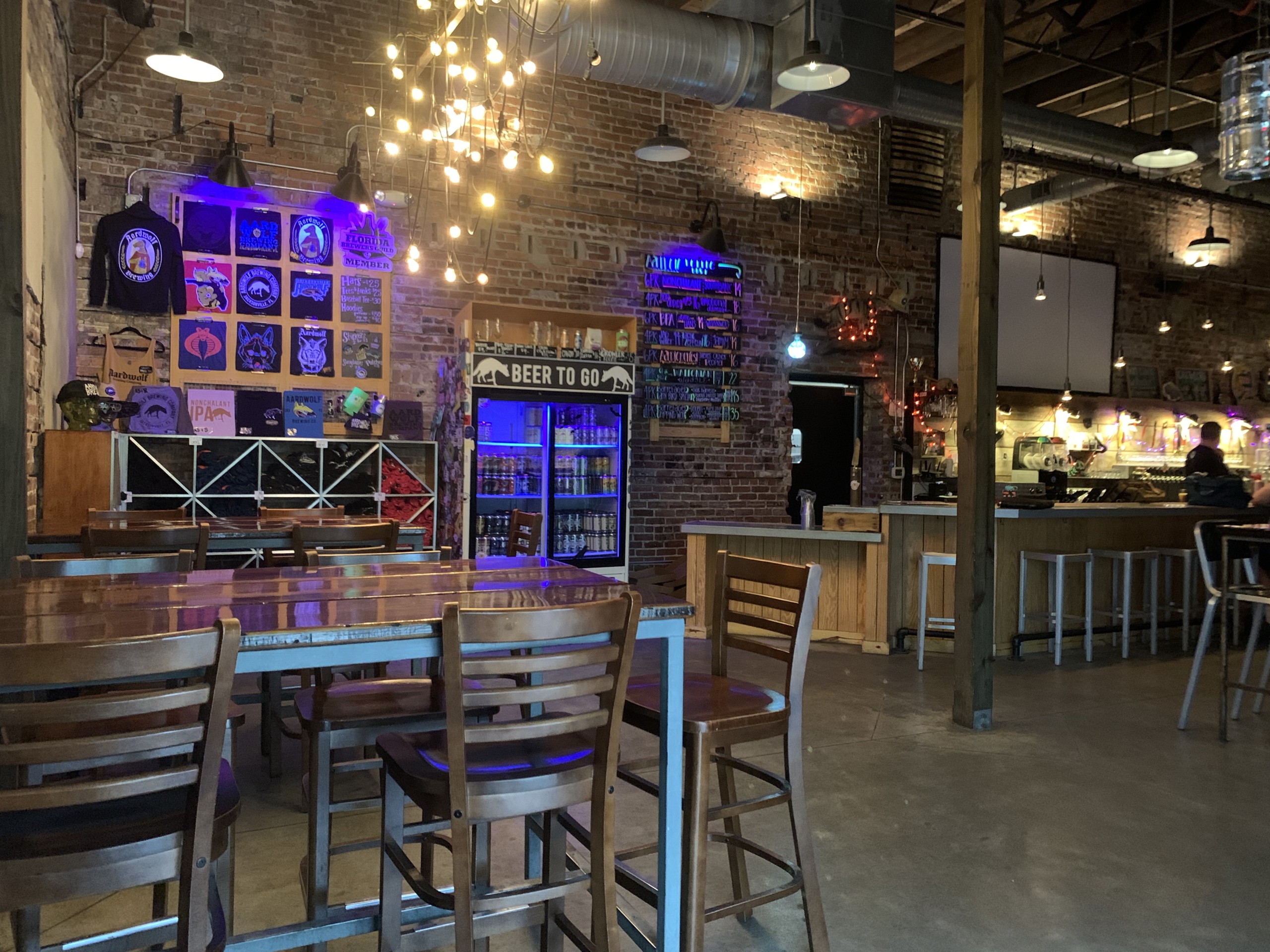 Outside the stadium, Daily’s Place Flex Field amphitheater hosted a Georgia-Florida Hall of Fame Exhibit and 3-vs-3 flag football games vied for crowd participation. Bars were rented out for private-parties prior to kickoff and every square inch of grass was being used throughout the downtown. Pedi-cabs, beach buggies, and Tuk’ Rides shuttled fans and visitors with music and lights from destination to destination or brewery to brewery. The Jax Ale Trail was buzzing with thirsty partisans prepping for the big game. Home to dozens of local award winning breweries, including Engine 15 Brewing Co., Intuition Ale Works, Aardwolf Brewing Co., Veterans United Craft Brewery and Pinglehead Brewing Company, there is no lack of delicious craft beer to be had. 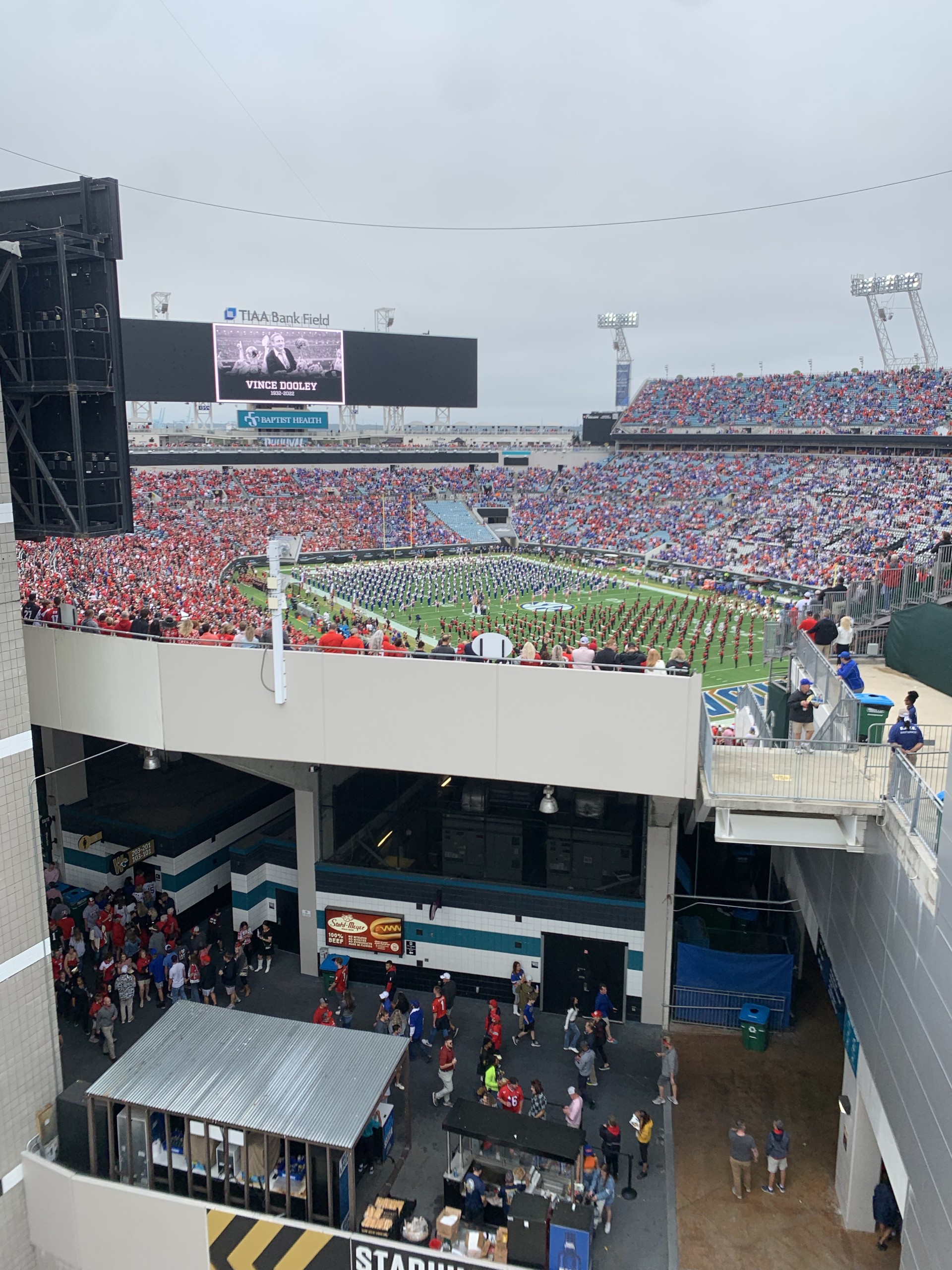 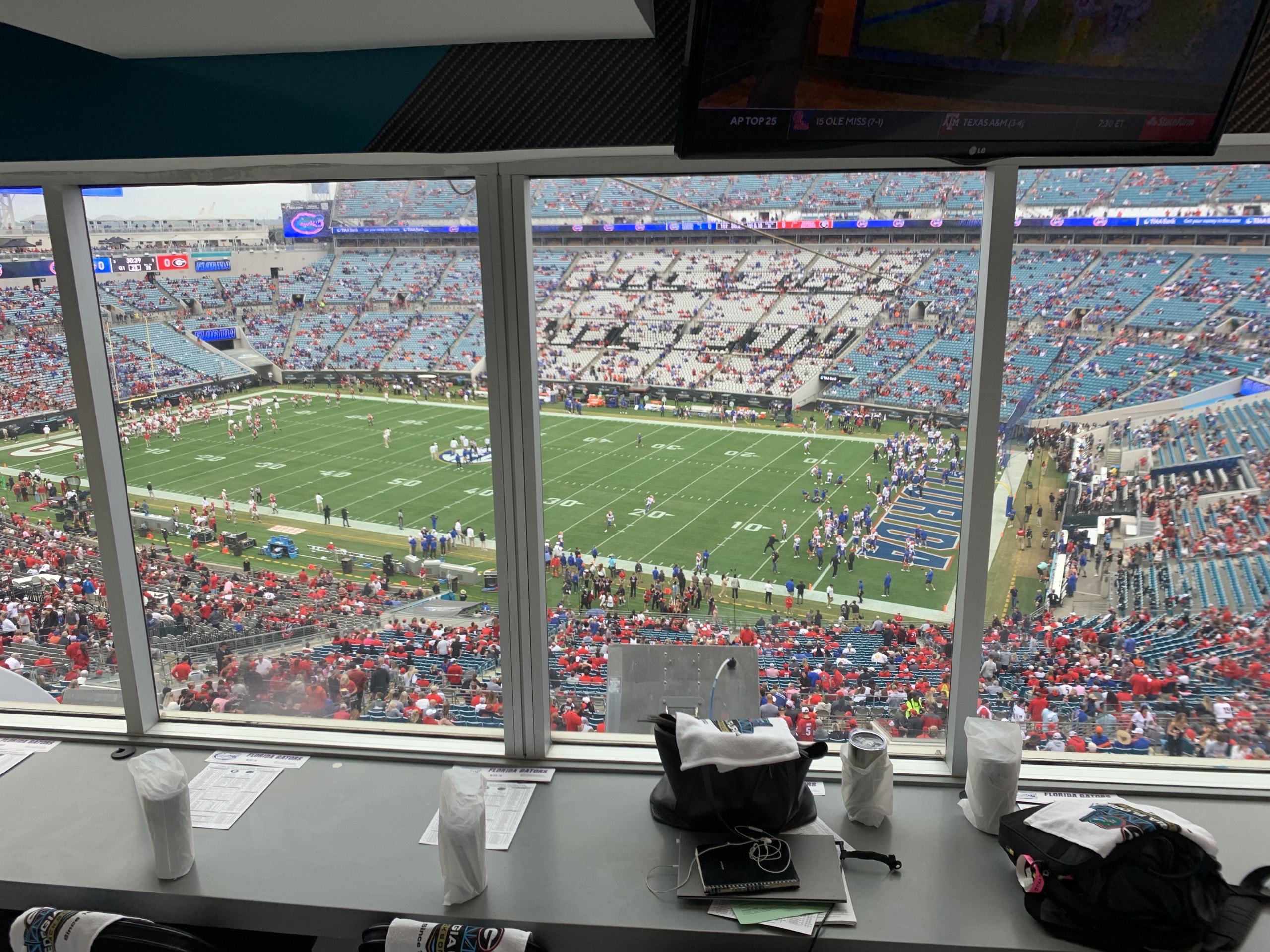 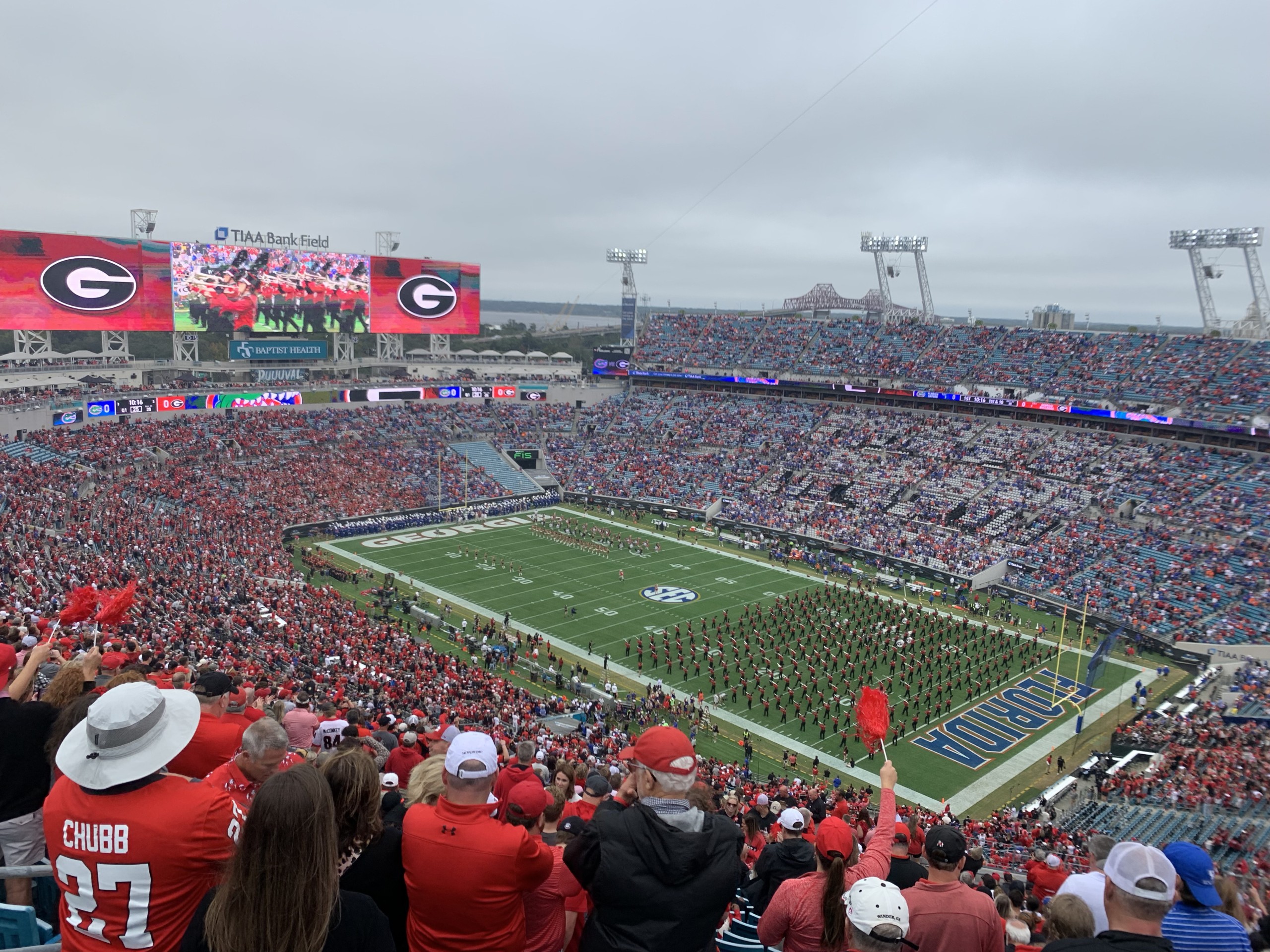 Inside the stadium, the party carried on as the crowd drifted into their seats. Divided of course, right down the middle, GA fans made their way to the home side and FL fans to the visitors side, the home team rotated every year. There was no denying which fan you were after taking your seat. TIAA Bank Field – voted one of the best fan experiences in the NFL – did not disappoint. With more than 200,000 square feet of outdoor and indoor meeting space, including private suites, patio decks, two pools and cabanas, and 55,000 square feet of video screens inside the stadium, there’s not a bad seat in the house. 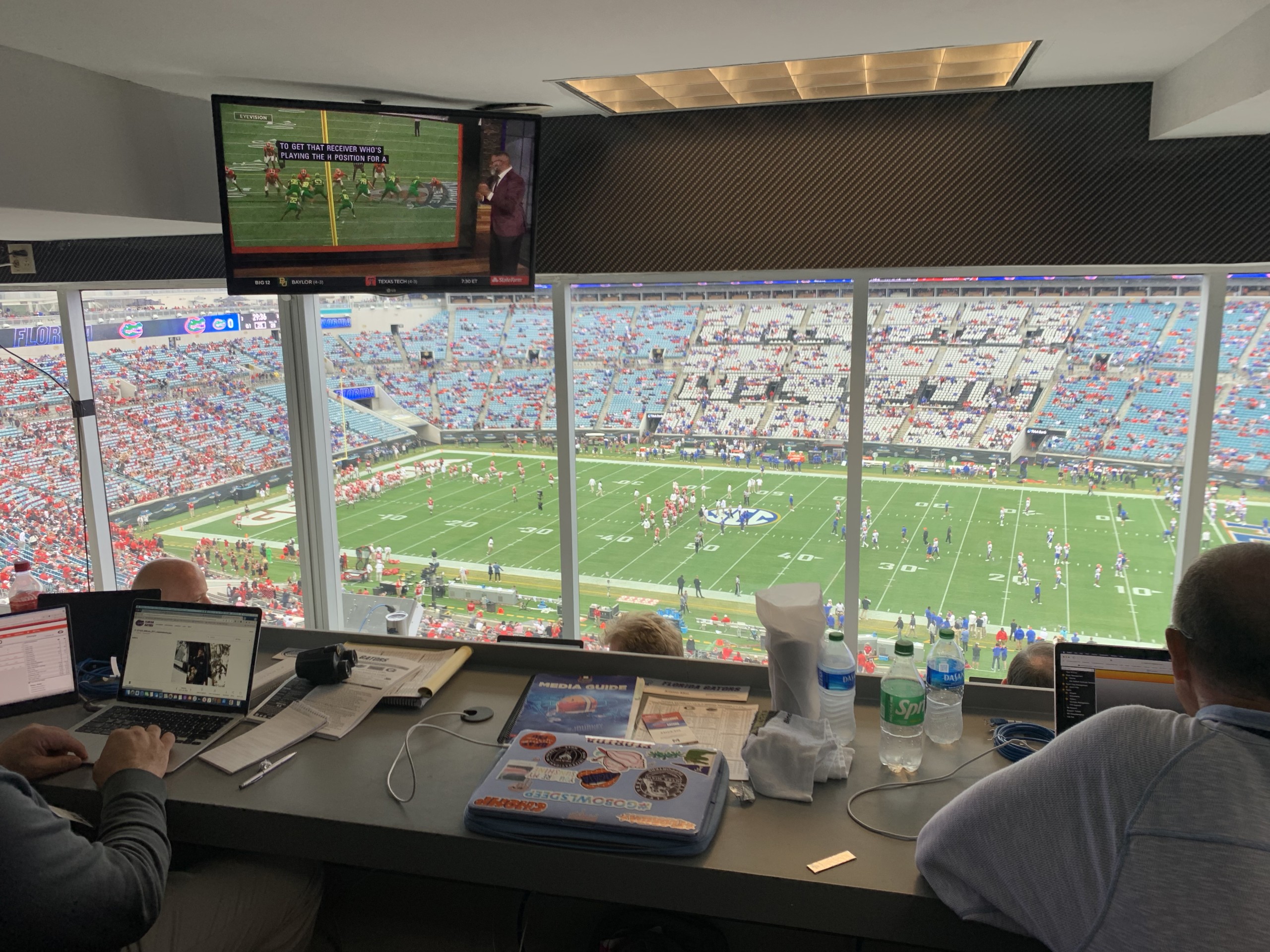 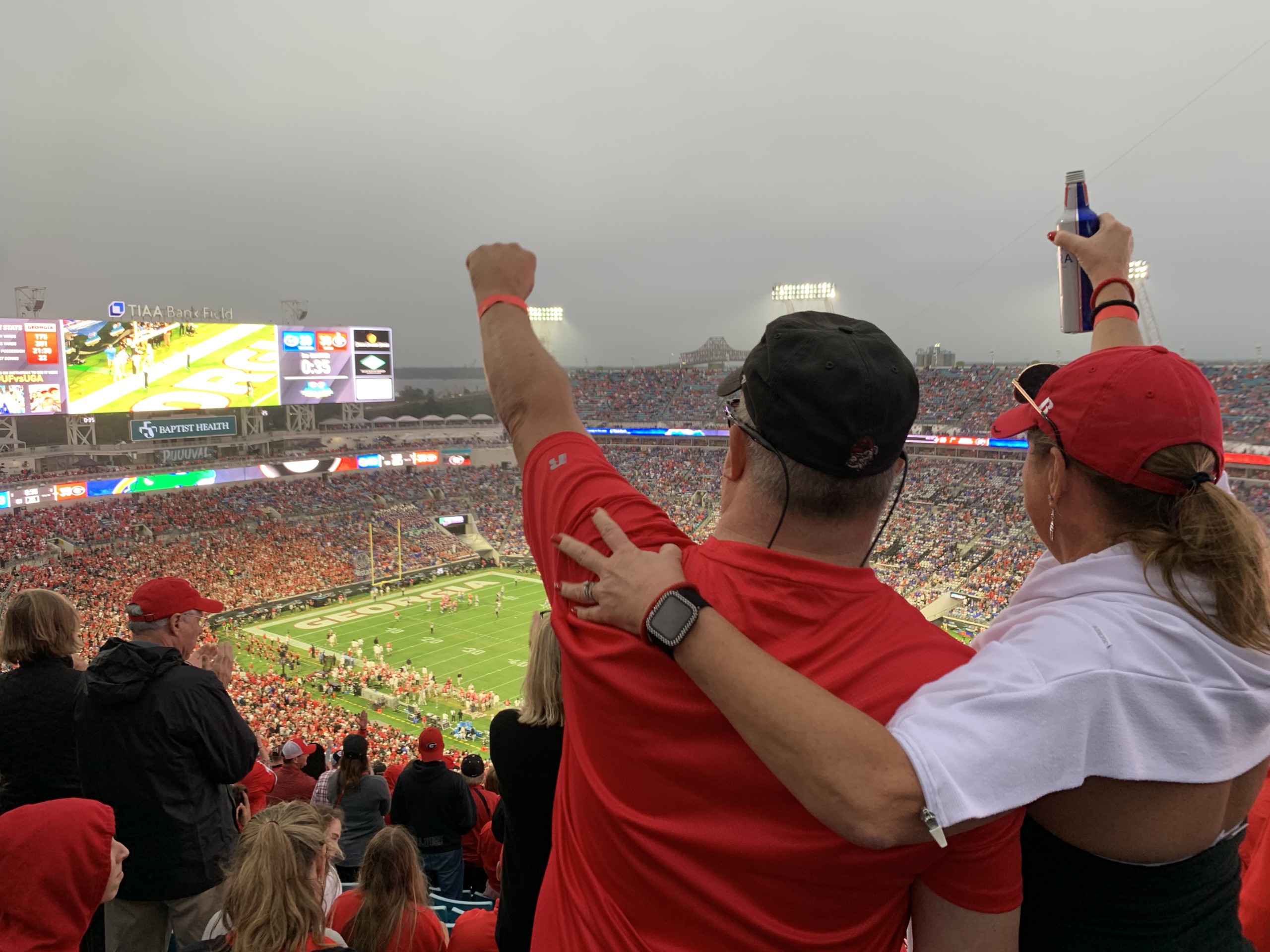 Last minute tickets meant three rows from heaven and surrounded by angels on the Georgia side, but the fans in the cheap seats made the game. A loving couple a few rows ahead shared hugs as they stood and raised their beers in salute to The Dawgs forward progression. A very loud, comedic and entertainingly passionate fan (think Kevin Hart) in the rows behind commentated the game for all to hear in section 404. Fans hugged after the game and exchanged contact info as they were now “friends” after three shared hours rooting on The University of Georgia. 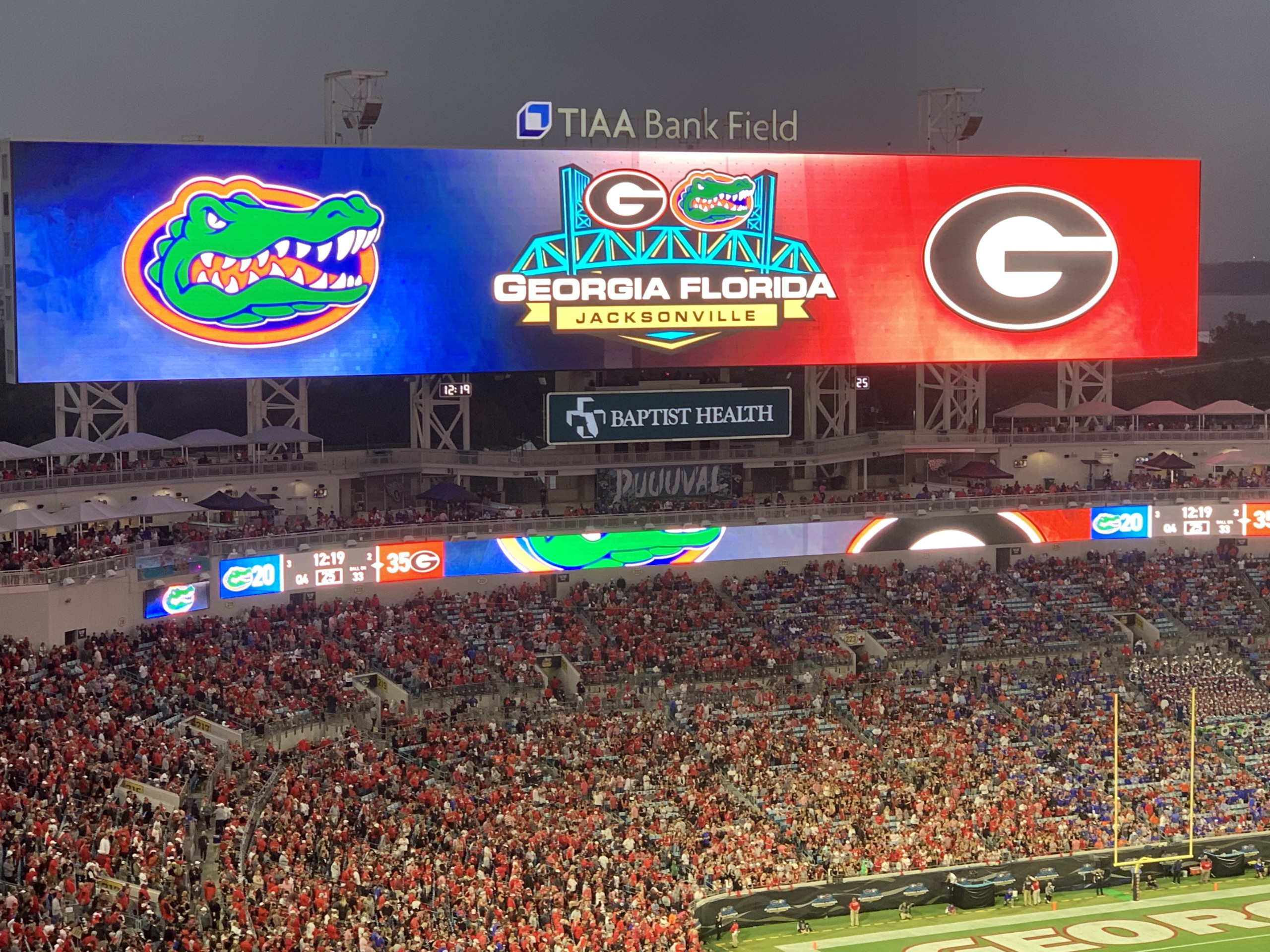 The crowd started to thin as GA pulled away in the fourth quarter and the blue side of the stadium began to dwindle, leaving the red heavy with color. There is no trophy presented to the winner of the game as this rivalry is fought for the coveted bragging rights (till the next game) and an oar. Yes, that’s right, the War for the Oar. In 2009, a 10-foot-long Okefenokee Oar was anonymously donated to the University of Florida with carved symbols and logos representing each school. The source of the oar is a 1,000-year-old cypress tree that once grew in the Okenfenokee Swamp, which straddles the Florida-Georgia border. The swamp was an interstate boundary once disputed by both Florida and Georgia fans, only adding hype to the long-time rivalry yet again. 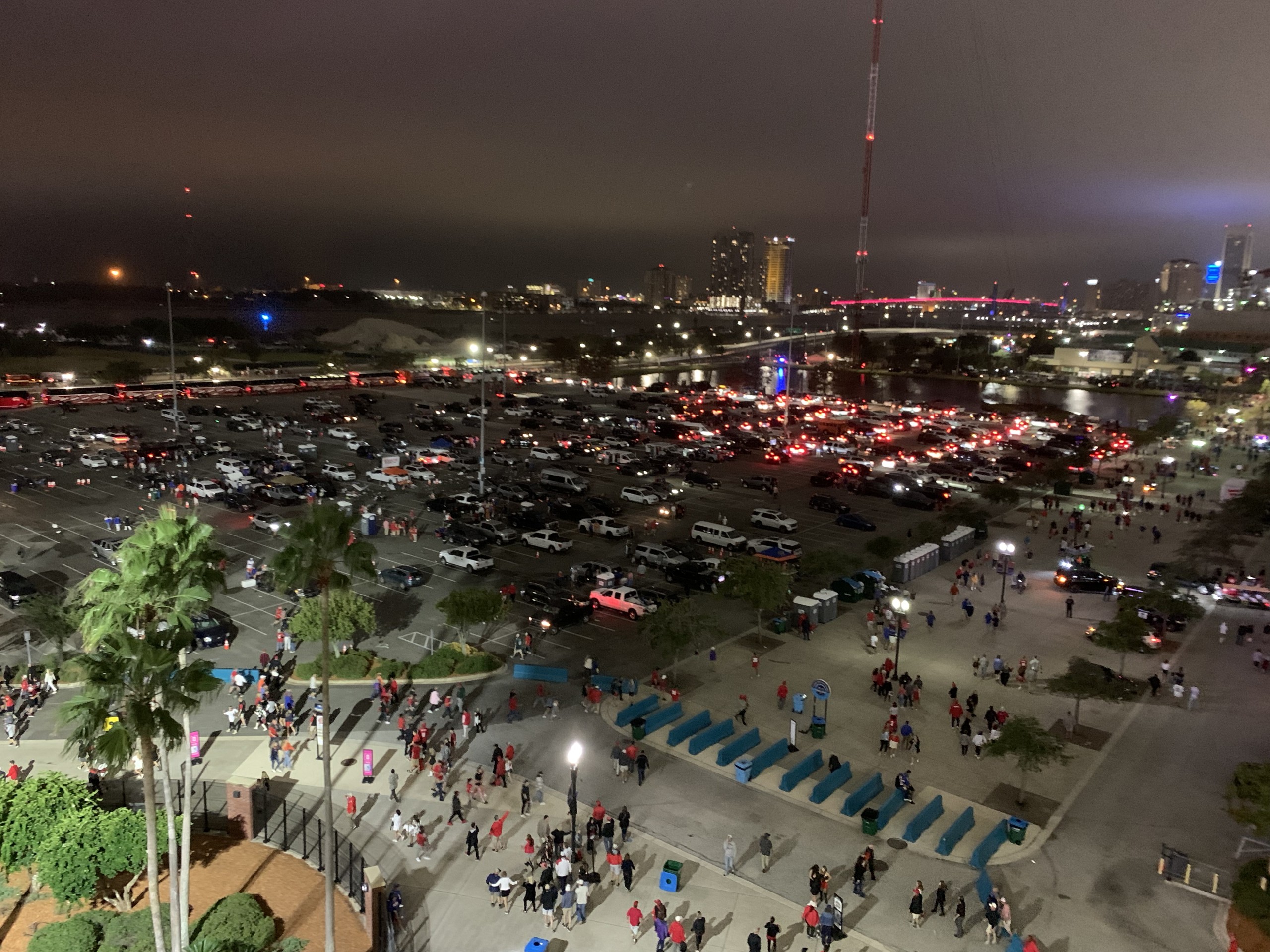 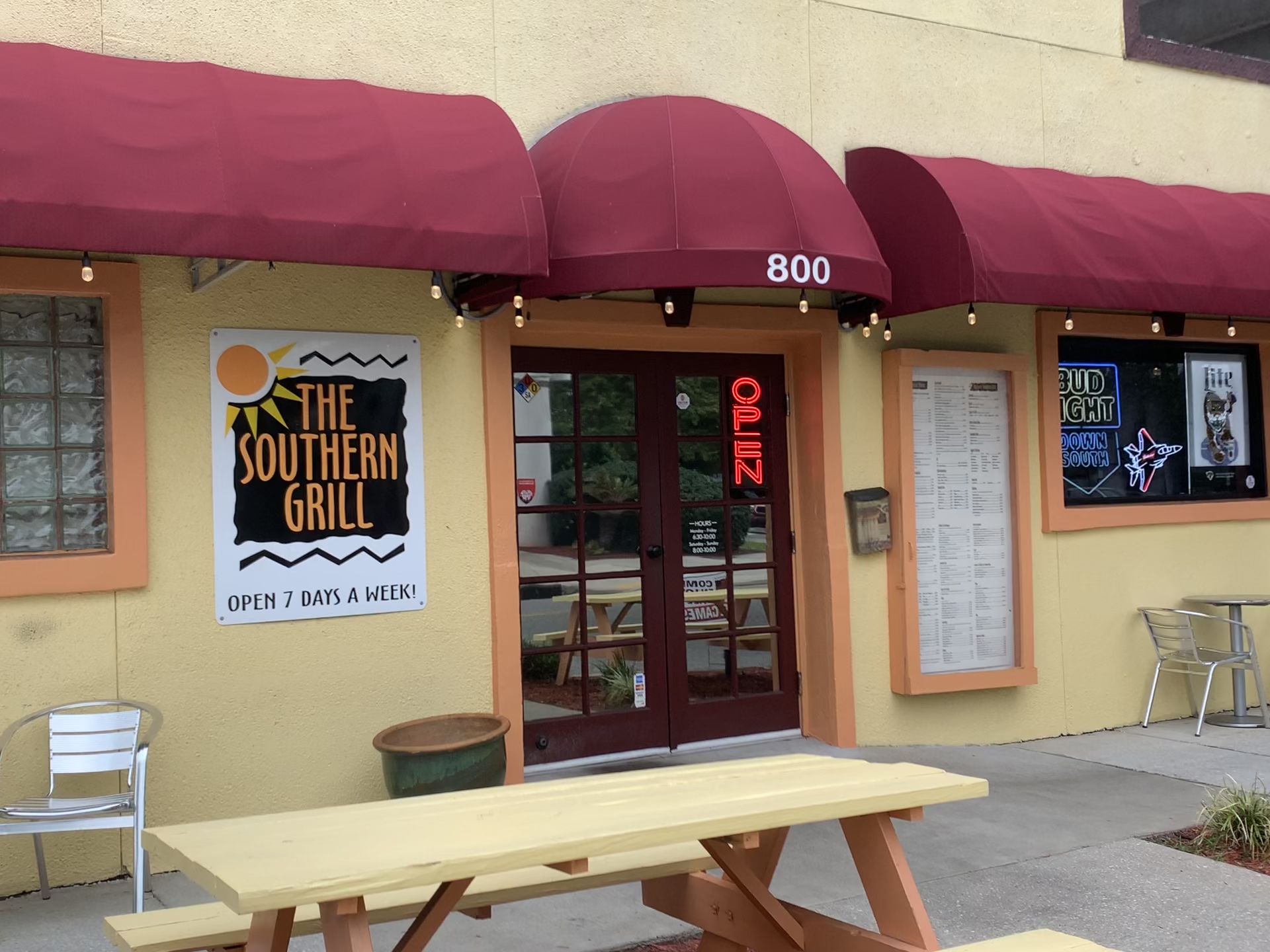 After the game bites were grabbed at The Southern Grill by locals and visitors alike. The charming restaurant and bar packed with fans looking for some good late night grub and one more drink. The local Flagler Avenue haunt filled with wings, fried okra and jalapeño poppers as well as Florida fans graciously accepting GA supporters in need of sustenance after a long day. 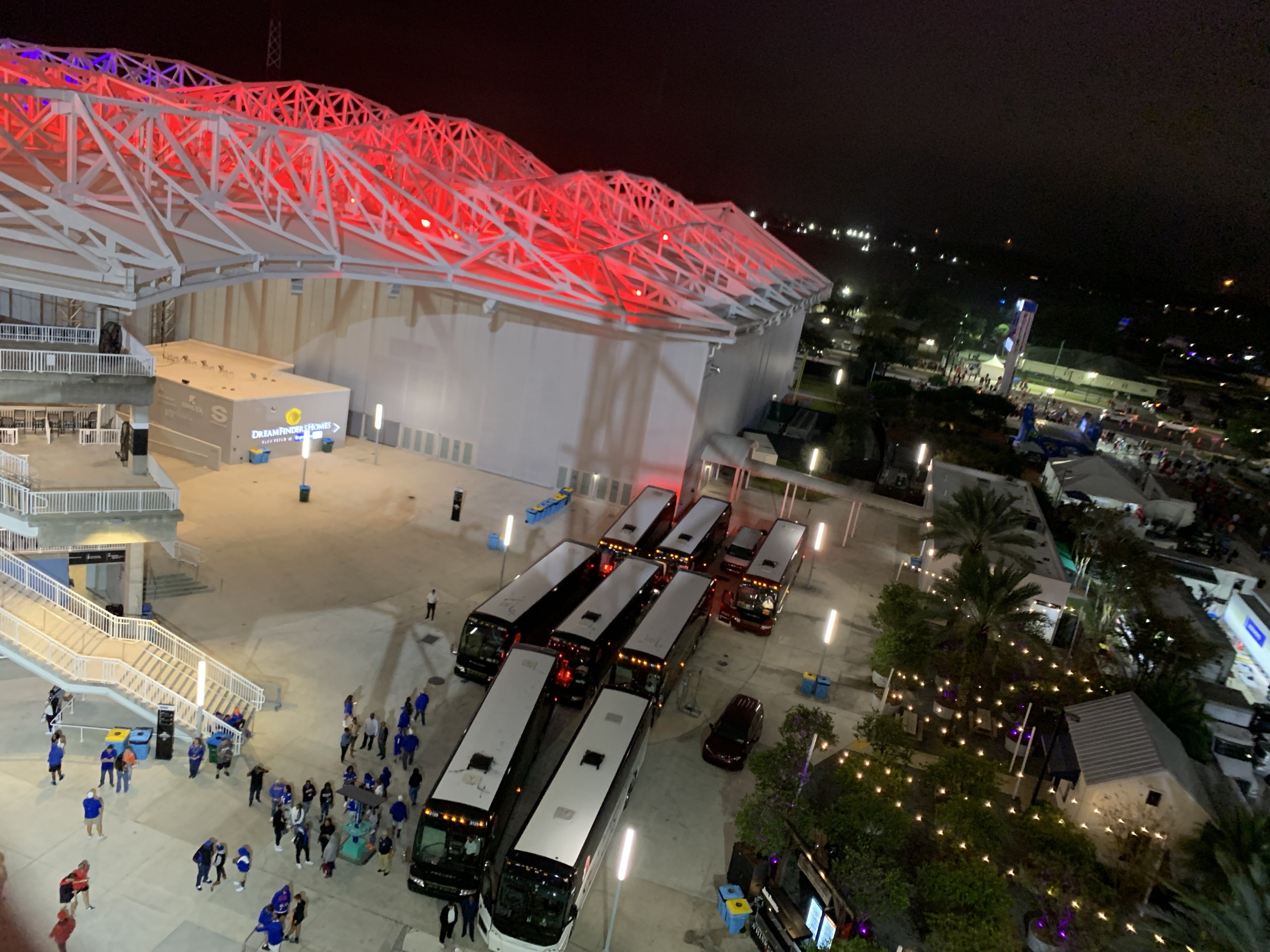 As the last beers were finished, the desire to return to the wonderful host city of Jacksonville started to grow. Home to historic architecture, eclectic street art and murals, museums, music theaters and 22 miles of beaches (more shoreline than any other city in the Sunshine State), the Georgia Florida Classic is not the only thing to call Jax home. Although these two teams can’t agree on much, they can all agree the world-class dining, upscale trendy clothing boutiques, galleries and a vibrant nightlife that make up Jax’s 840 square miles each offer a plethora of reasons to come experience a different side of Florida for both relaxation and adventure.