When the Spirit Moves You 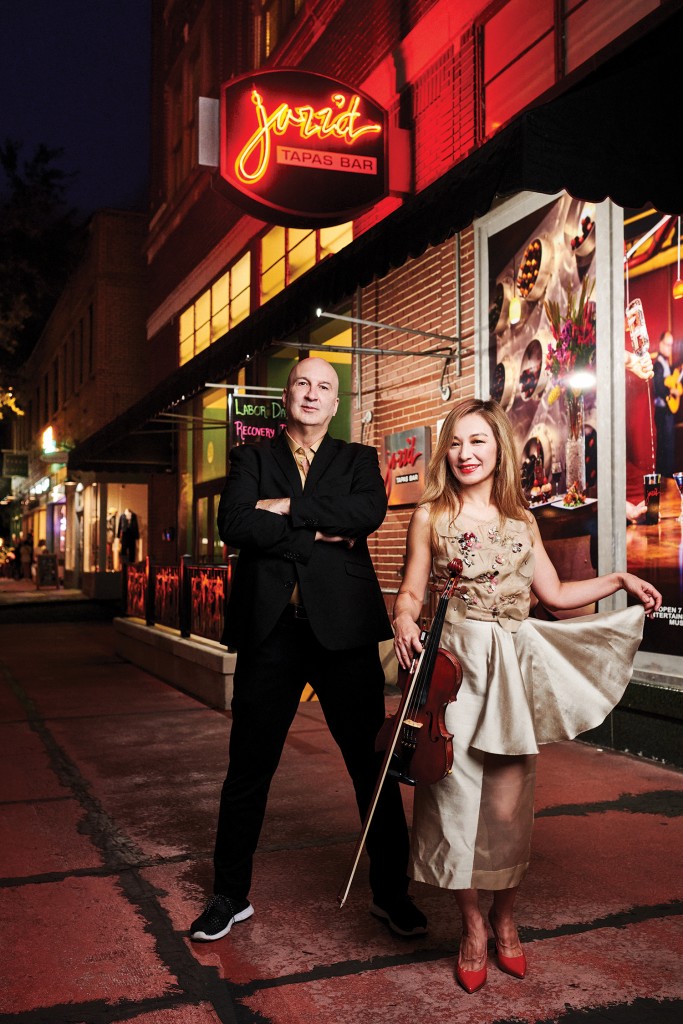 The Free Spirits Orchestra is the new sound of the Lowcountry. A playful and refreshing collaboration of cultures, the musical duo has played with the traditional boundaries of genres. Ever hear a Led Zeppelin song performed by a classically trained Kazakhstani violinist? You’ll want to now.

large percentage of folks in the greater Savannah area who play a musical instrument would likely recognize Butch Braddy.

That’s because the longtime drummer and percussionist has not only played in several of the area’s better-known rock and pop-oriented bar and party bands over the past few decades, he’s also helped countless folks get into playing the drums themselves through his 25-year career in instrument sales at Portman’s Music Superstore (where he currently manages that regional retail chain’s percussion department).

These days, however, Braddy is increasingly visible as a full one-half of perhaps the smallest orchestra in the world. That would be the Free Spirits Orchestra, the cheekily-named (and increasingly popular) instrumental world music combo he leads alongside his extremely talented wife Aiman Braddy (née Beibitbayeva). In just under two years since the group’s formation, this unusual duo has become a buzz-worthy act that’s drawing raves from listeners wherever they perform — from intimate clubs and restaurants like Jazz’d Tapas Bar to outdoor festivals hundreds of miles away.

Their calling card? The unexpected.

The FSO (as they’re coming to be called) is not your average party band. Butch plays a tiny, uniquely appointed drum kit outfitted with a wide variety of added percussion accessories, including an electronic pad which allows him to manually trigger all manner of digitally sampled sounds. Meanwhile, Aiman, a dazzlingly gifted performer, handles the melodic aspect of each tune — on an electrified violin. Everything is played live in real time by the two members, without the use of pre-recorded backing tracks of any kind.

“The truth is it’s funny, because people hear us first. Then they see us, and their mouth drops.”

“People who’d normally have no interest in violin music are amazed by it. We get Southern rock and country fans more used to seeing the violin used like a fiddle (and we’ve been known to play some fiddle tunes!), but we use it to play everything from Led Zeppelin to tangos, from Pink Floyd to salsas, or from Irish jigs to AC/DC. Everybody seems to enjoy it. I think that’s because it’s so incredibly different and because it’s very exciting to watch Aiman play.”

The partnership between local native Butch and the foreign-born Aiman might be deemed as unexpected as the captivating sound they make together. The two met by chance when she and her married twin sister (who both hail from the former Soviet republic of Kazakhstan) caught the tail end of a set by one of his previous bands in a local bar. Butch says he was immediately “smitten” by the enchanting Aiman, and soon learned both siblings were esteemed violinists in their homeland, and that she had toured the world several times as a featured member of the State Academic Symphony Orchestra of the Republic of Kazakhstan.

To learn more about the duo and their upcoming schedule, visit freespiritsorchestra.com.