Washington on Your Side

The Georgia Society, Sons of the American Revolution shines the historical spotlight on a founding father’s time in the Hostess City. 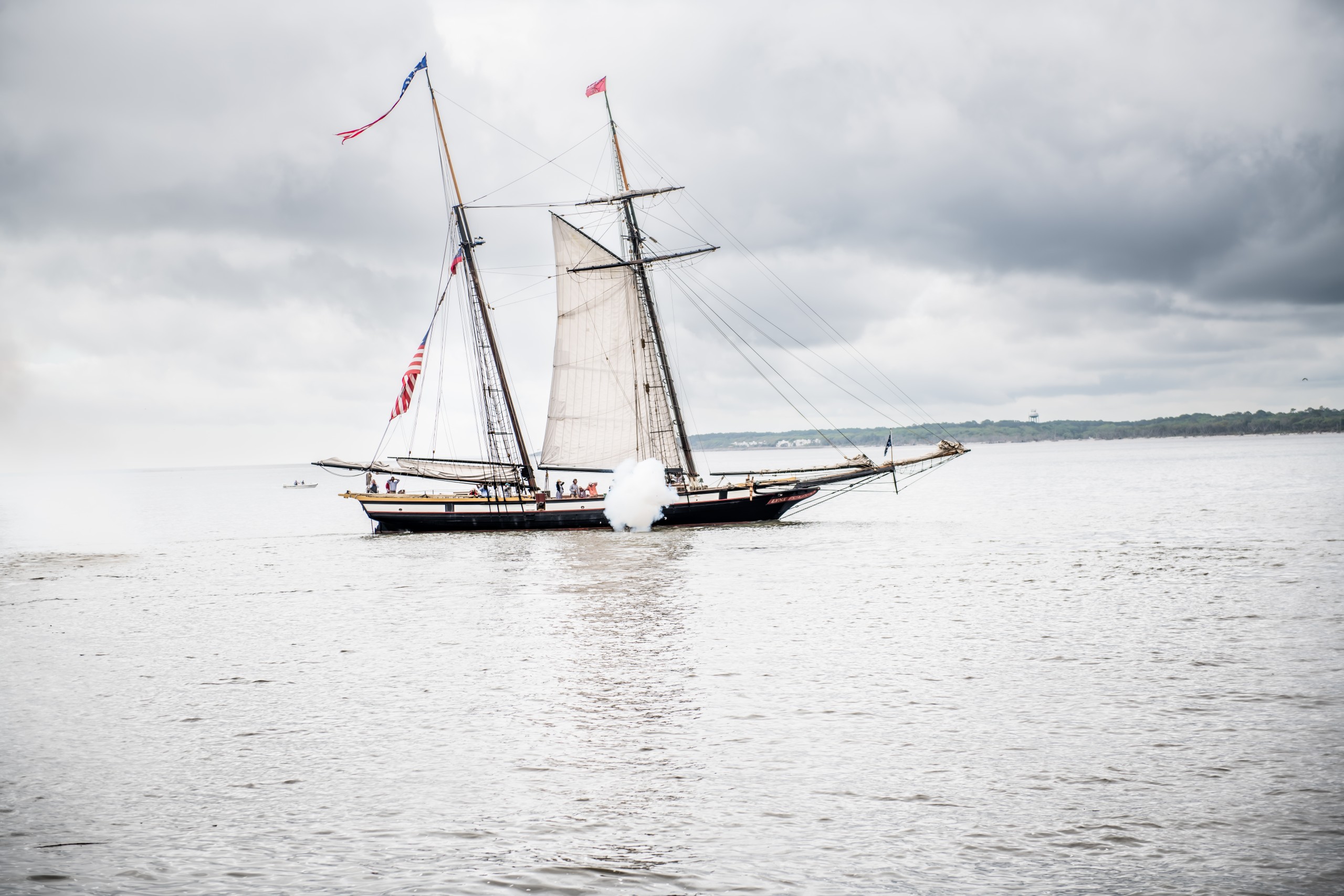 The Georgia Society, Sons of the American Revolution shines the historical spotlight on a founding father’s time in the Hostess City.

The year was 1791, and a young nation was taking a well-deserved victory lap after casting off the shackles of the king’s oppression. As part of his Southern tour, our first President and the father of our country George Washington was making his first-ever visit to the state of Georgia. 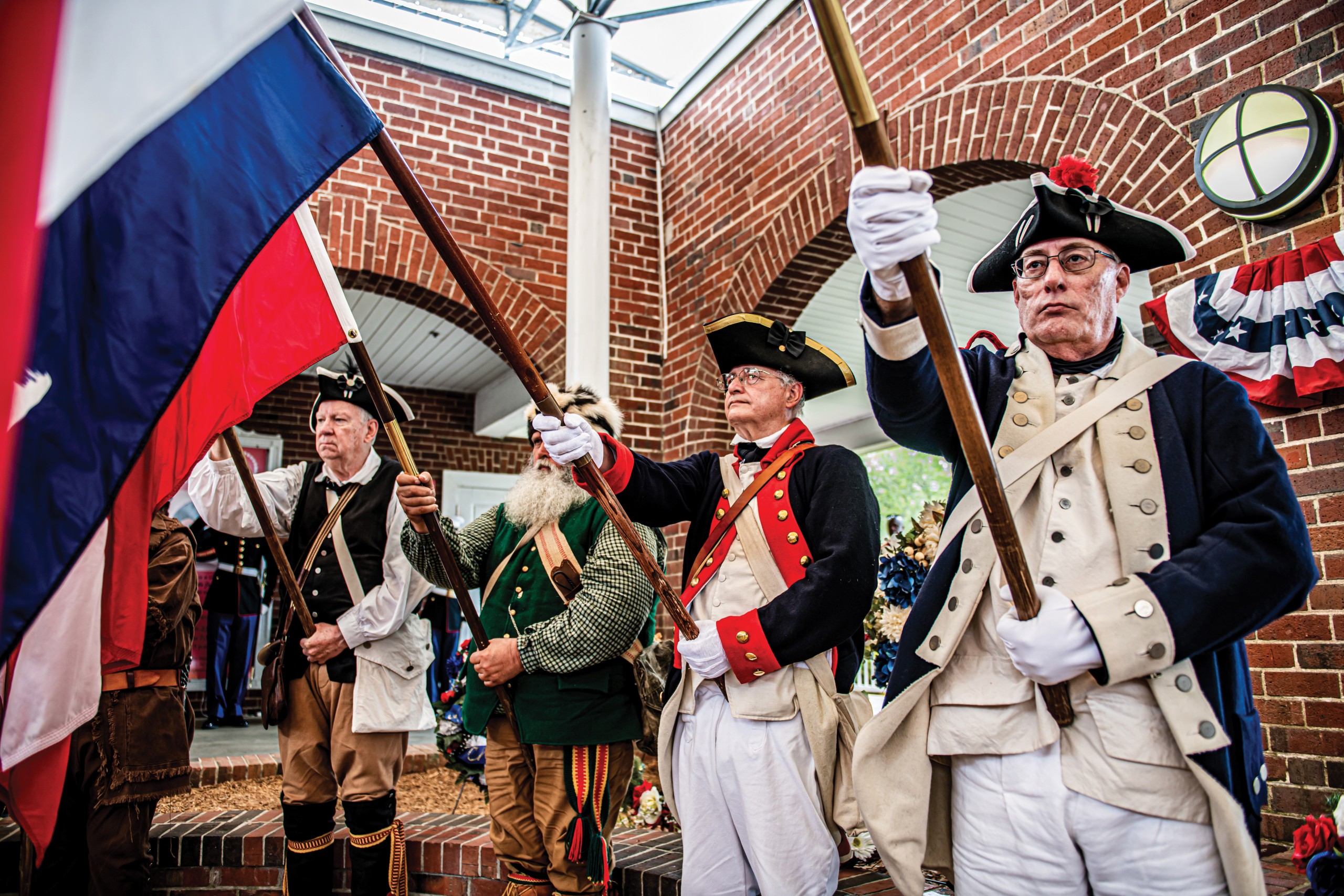 History will tell you that he rode into the city of Savannah atop a white horse, a gleaming symbol of liberty and the endless promise that came with a country divining its own destiny for the first time. As with most things, however, the histories tend to embellish a little bit. 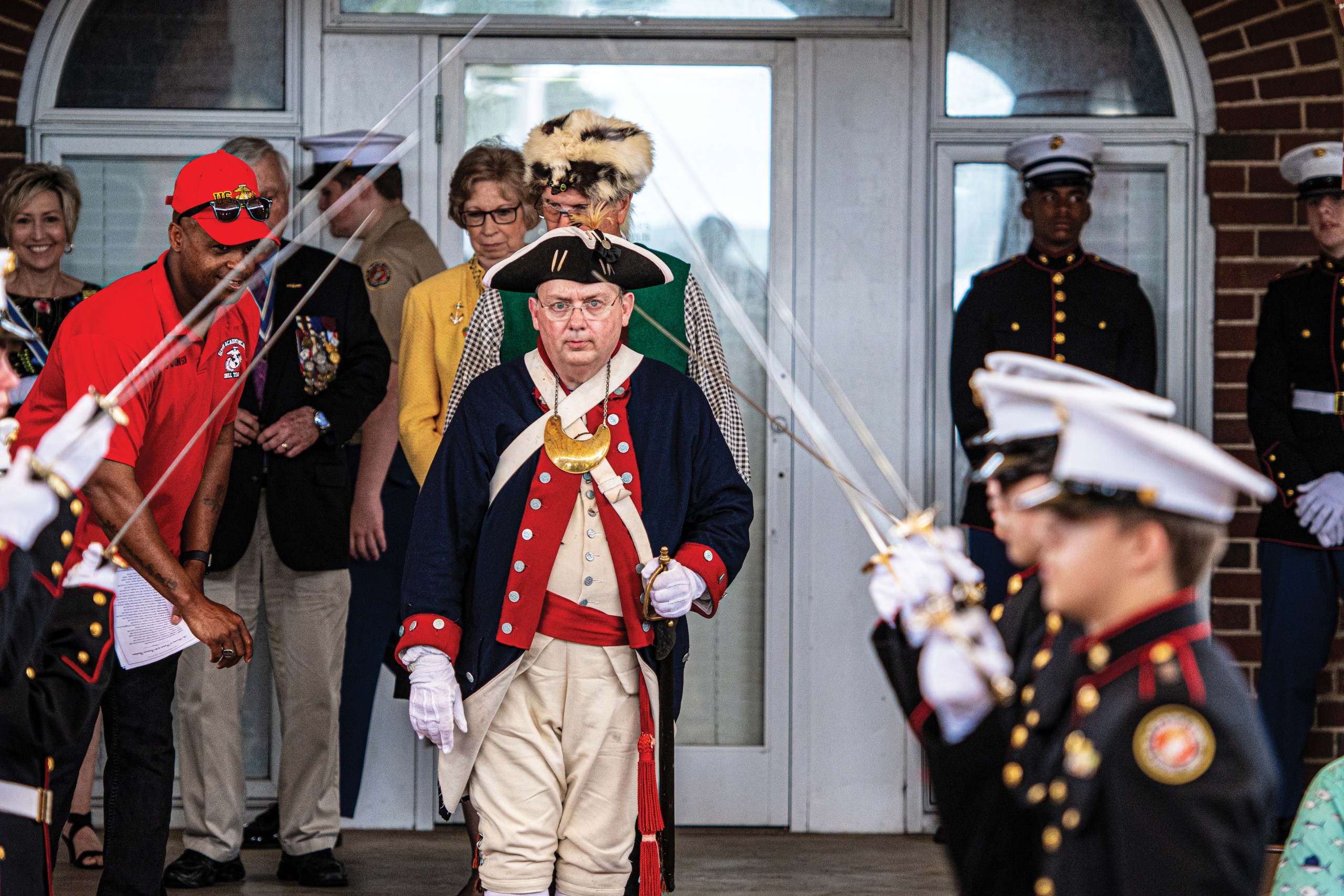 “There is a lot of stuff out there, and a lot of it is wrong,” said John Trussell, of the Georgia Society, Sons of the American Revolution. So does that mean Washington didn’t arrive via the legendary pale horse?

“In Savannah, he did not. He came across the state line to Perrysburg then got on a barge that was captained by eight ship captains and a coxswain… envision that in your mind, him coming down the river waving to people assembled on the banks.” 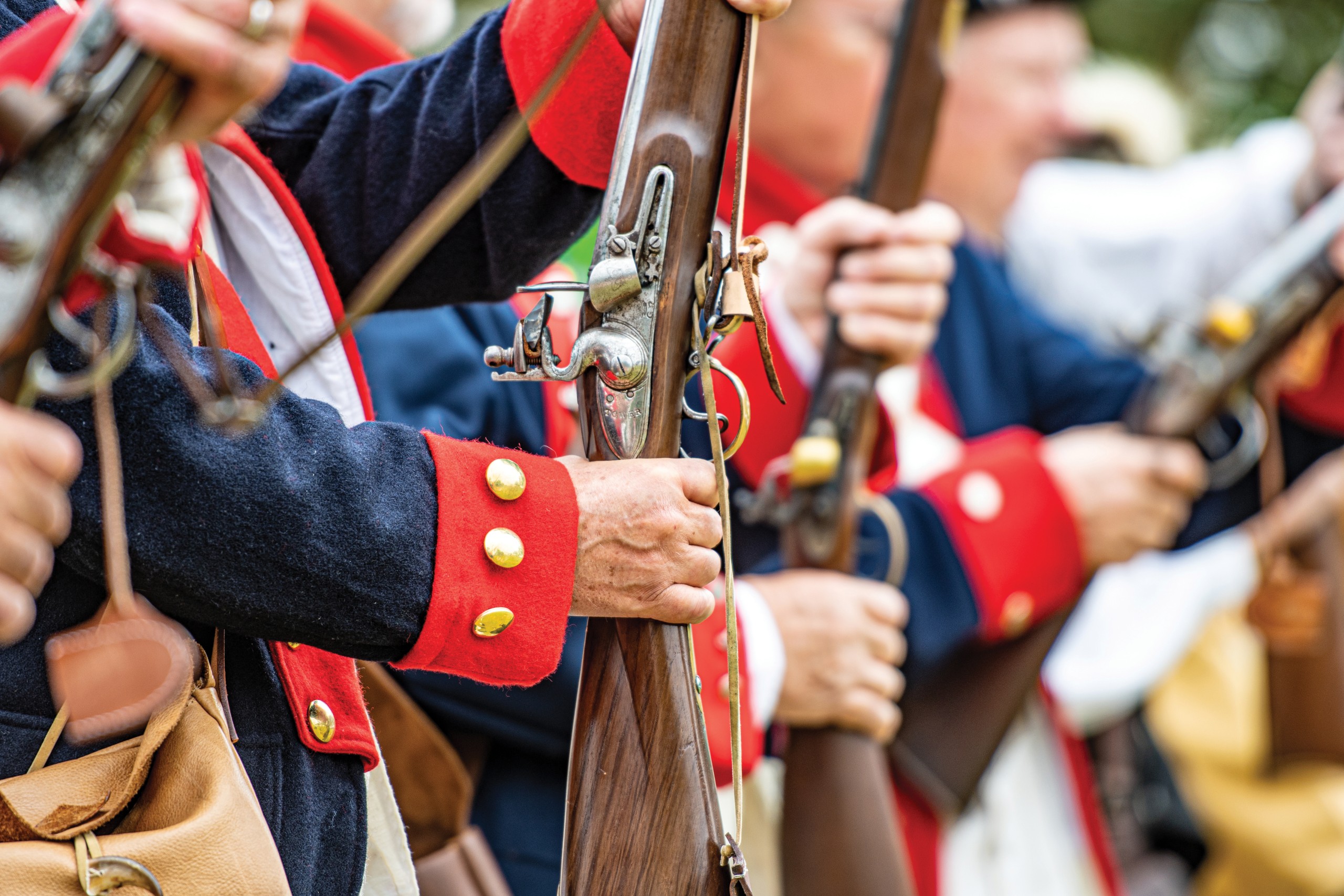 If you’re having trouble envisioning that, the Sons of the American Revolution have you covered. The group recently commissioned a painting by celebrated artist Jeff Trexler, depicting Washington’s watery approach to Savannah, ringed by cheering Americans and under the smoke of a 26-gun salute. “It’s going to be a pretty dramatic painting,” promised Trexler. 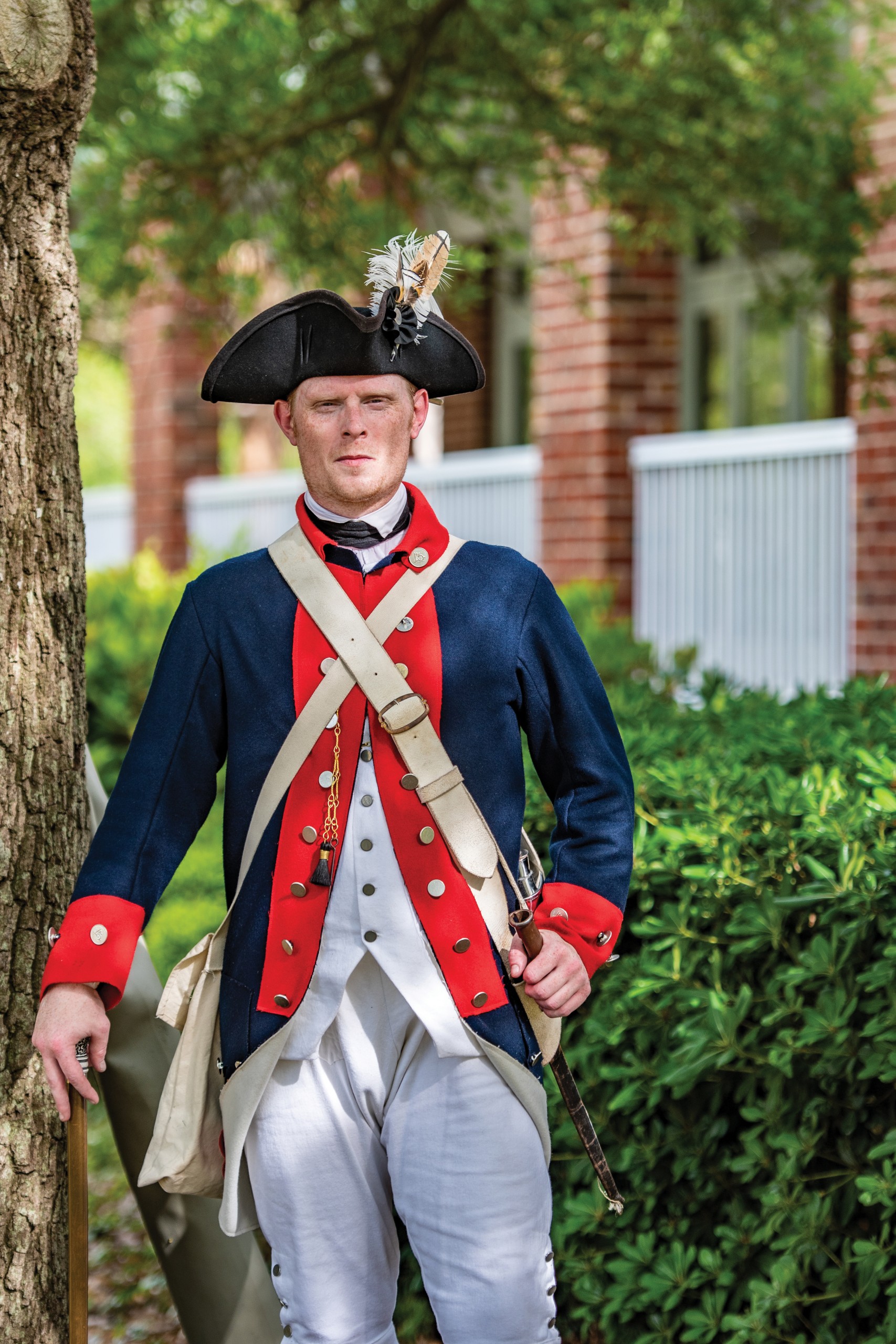 The original version of this painting will hang in the organization’s headquarters, but they will be donating copies that will hang in the Savannah History Museum, the Metropolitan Planning Commission and the Coastal Heritage Society. It’s not the only gift that the Sons of the American Revolution will be bestowing on the city of Savannah.

Along with a bench that the group has already installed at Tricentennial Park commemorating the brave soldiers who fought in the Battle of Savannah in 1779, the Sons of the American Revolution will be installing a bench commemorating the British withdrawal three years later. 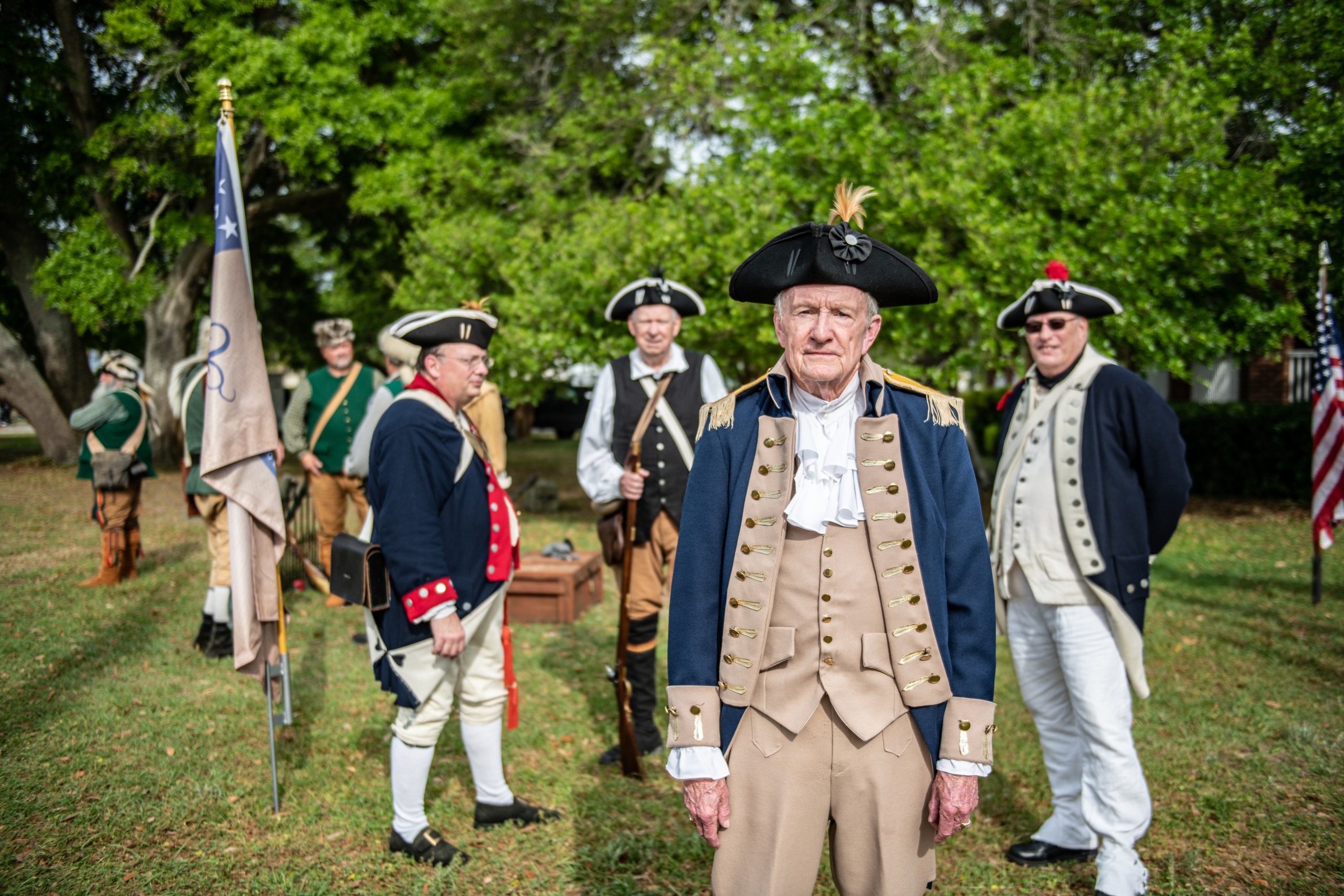 Members of the Georgia Society – Sons of the American Revolution traveled to Saint Simons Island to participate in an event dubbed “Patriots Day.”

“The official unveiling will be July 14,” said Trusell. “We’ll start the ceremony in the theater at the Savannah History Museum, then move over to the battleground at Tricentennial Park.”

It will all culminate in 2026 with the big 250th anniversary of the signing of the Declaration of Independence. 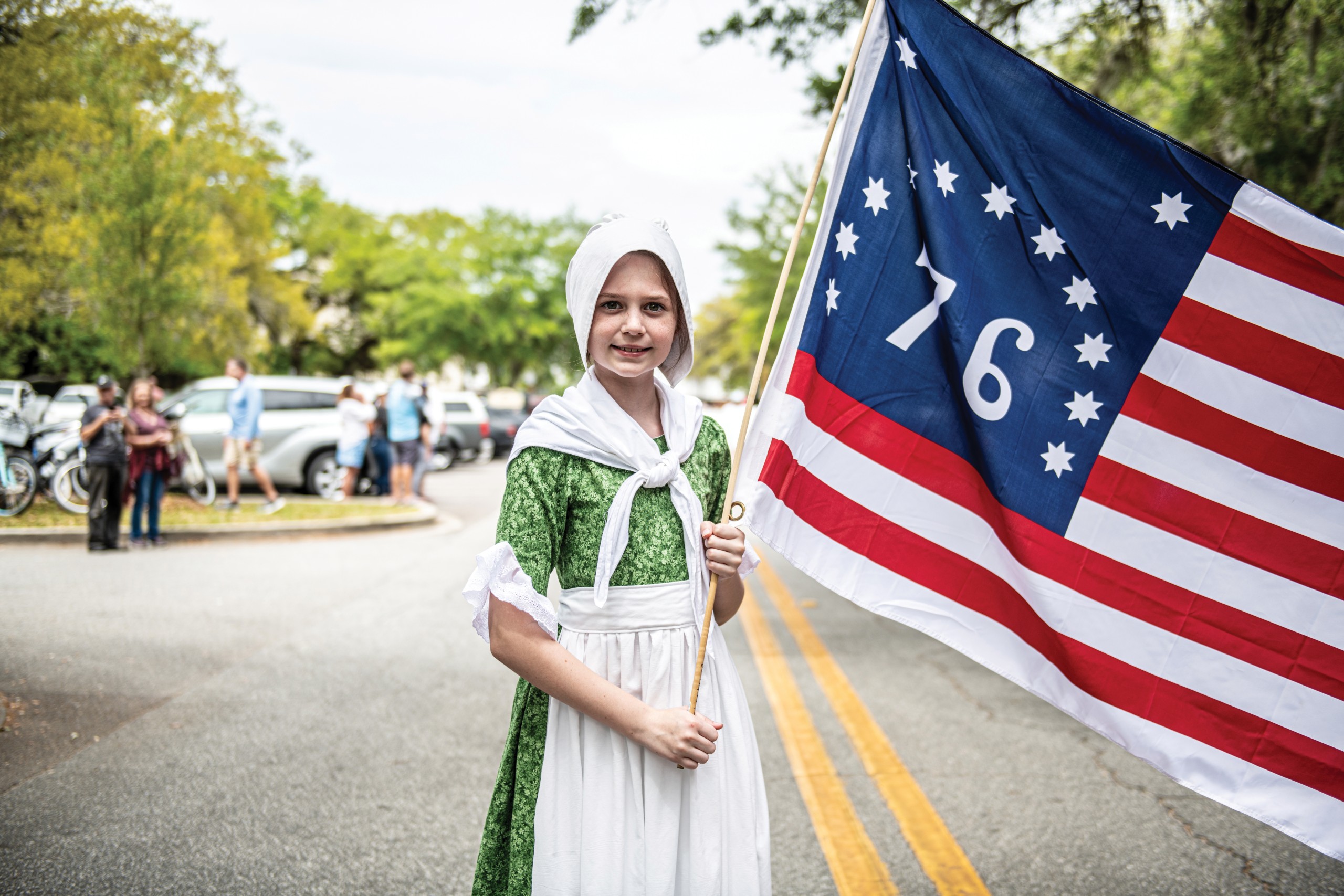 “Because we had such success with the first two, we’re going to be celebrating the 250 years since the birth of our country,” said Trussell. “We decided to place a bench in Johnson Square, which is not only the oldest and largest square in Savannah, it’s where George Washington worshipped while he was here.”

These benches will serve as a reminder that our freedom came at a price, and it was paid by some of the bravest people to ever call Savannah home. 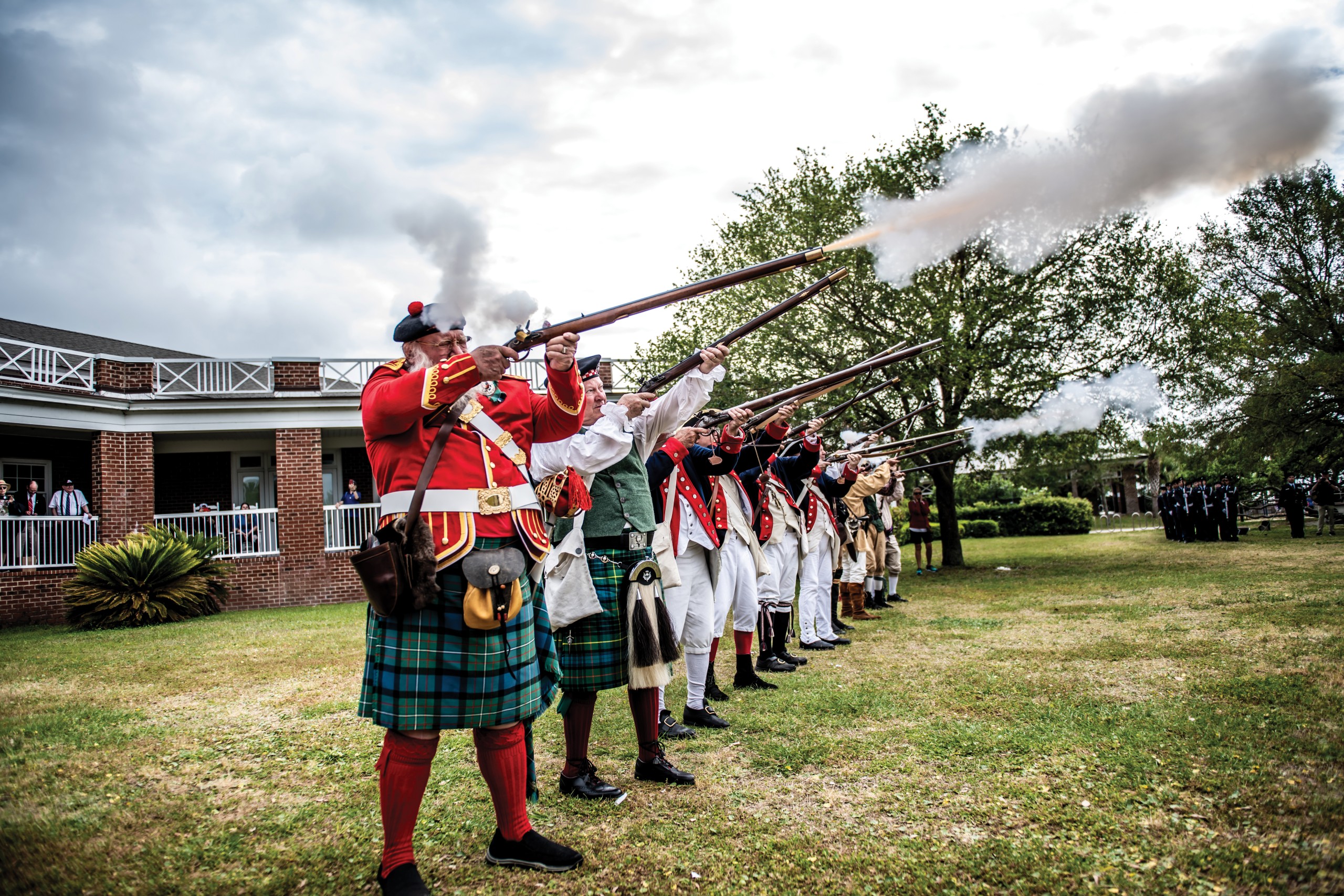 “We’re really proud we can do these things and commemorate the history and all the great things going on in Savannah,” said Trussell. 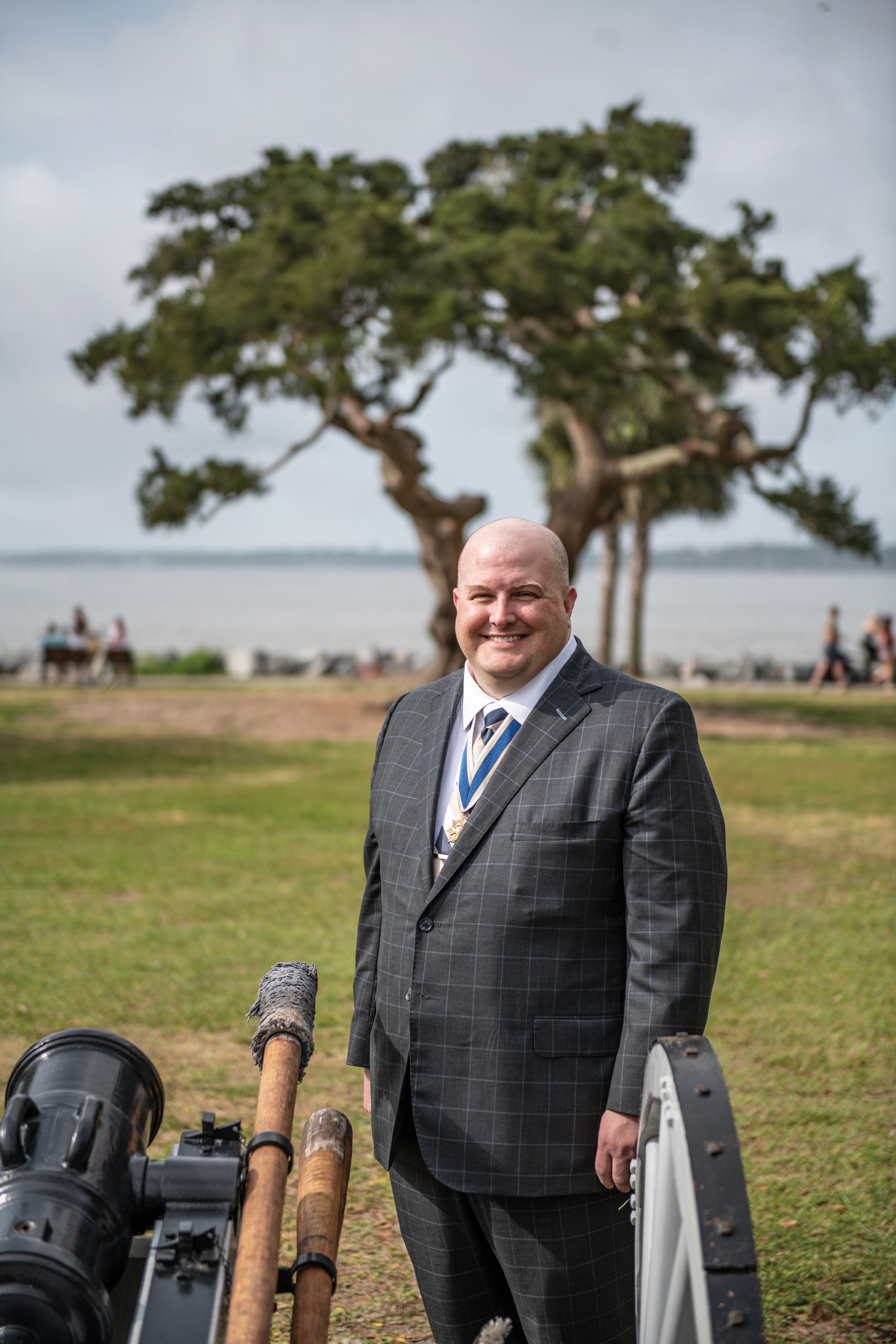 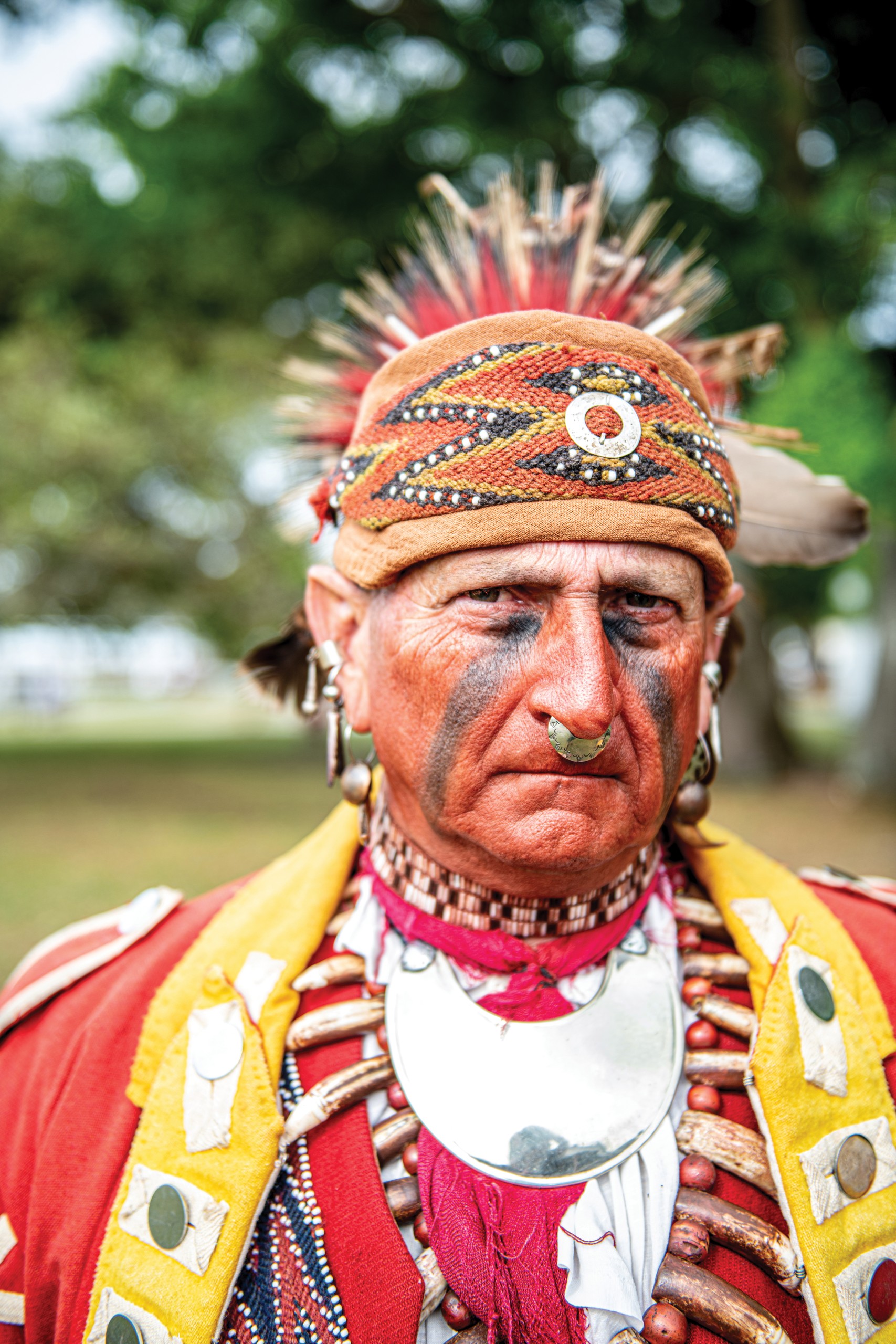