University of Georgia Marine Extension and Georgia Sea Grant has devised a creative way to clean up the Georgia coast and provide financial support to local commercial shrimpers whose income was limited during the pandemic. 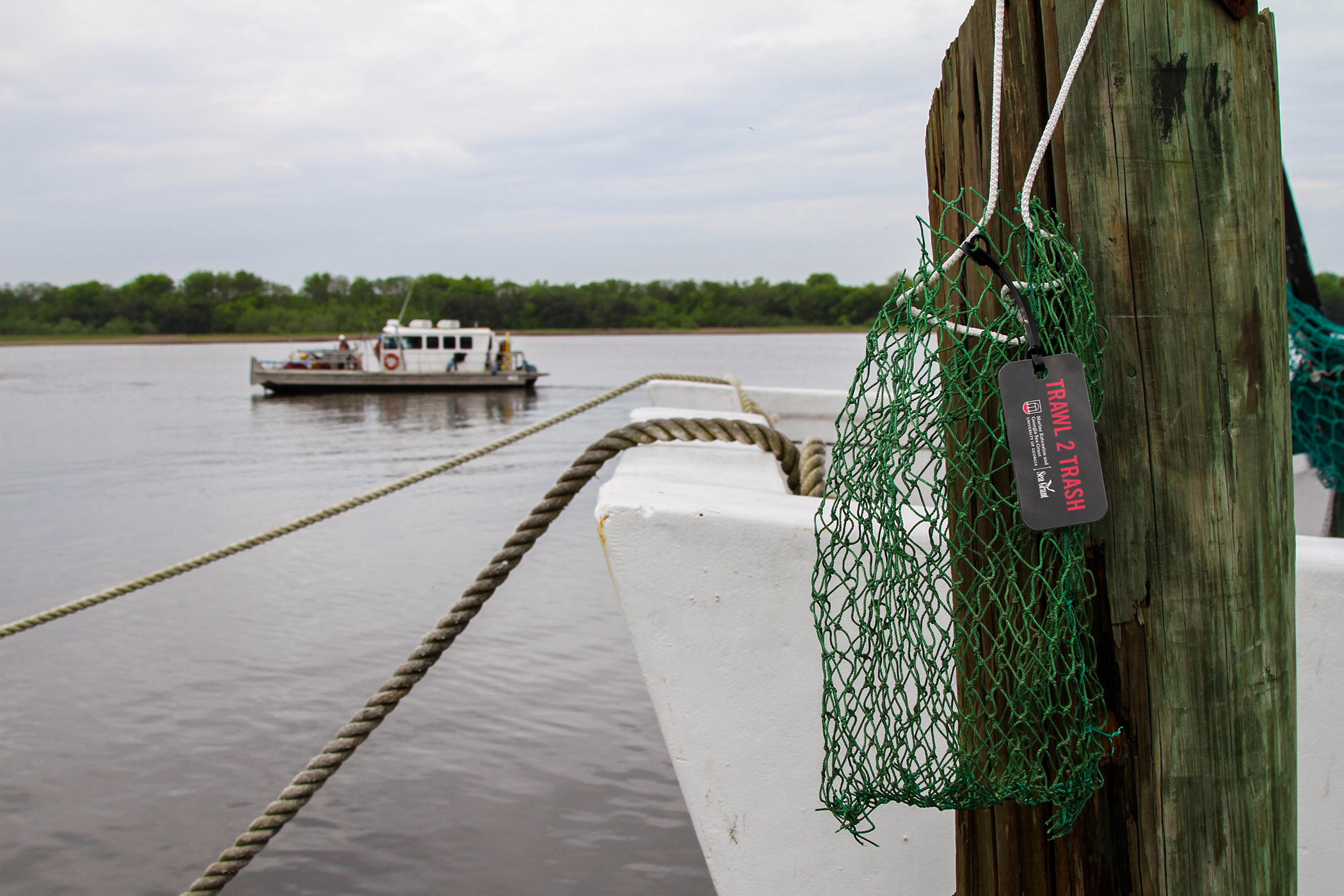 The Trawl to Trash program recruits and hires local commercial shrimpers and Mcintosh County Academy students to construct stow bags made of recycled shrimp net material for future distribution among recreational boaters, fishermen and the public to educate the public on marine debris and to encourage usage of the stow bags, thus helping to reduce marine debris from entering the environment. Photos / Shannah Montgomery.

University of Georgia Marine Extension and Georgia Sea Grant has devised a creative way to clean up the Georgia coast and provide financial support to local commercial shrimpers whose income was limited during the pandemic.

Through Trawl to Trash, funded by the National Sea Grant College Program, commercial shrimpers are recruited to sew bags made of recycled shrimp net material that can be used to collect marine debris. 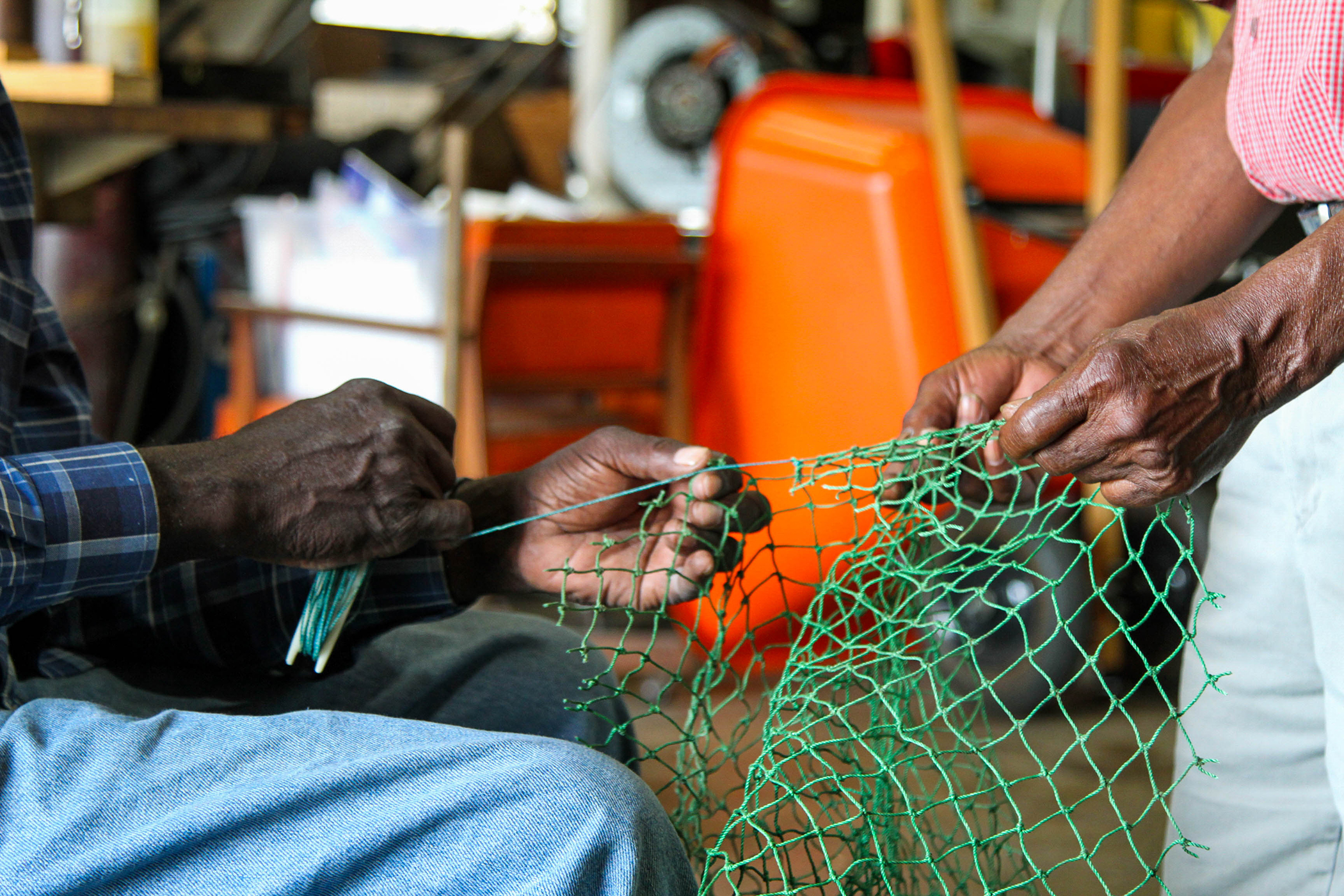 Two fishermen work to create a bag for Trawl to Trash.

“It’s exciting to find a new purpose for these trawl nets and who better to make the bags than the shrimpers who have spent countless hours mending their nets ahead of shrimping season?” said Dodie Sanders, marine educator at Marine Extension and Georgia Sea Grant, and lead on the Trawl to Trash project.

The shrimpers earn $20 for each bag they sew.
One fisherman, Jonathan Bennett, used the money he earned from the nets to pay the people working for him.

“It was extra money, it helped us out,” said Bennett, a fifth-generation commercial shrimper from Brunswick, who now captains his own boat, the Flying Cloud. Bennett has been shrimping since he was 4. His grandfather taught him how to repair the shrimp nets.

“For years I was the only man on the boat who knew how to sew so I got pretty good at it,” he said. He and his grandfather, who is still a shrimper, joined the Trawl to Trash project during the off season when their boat was being repaired. 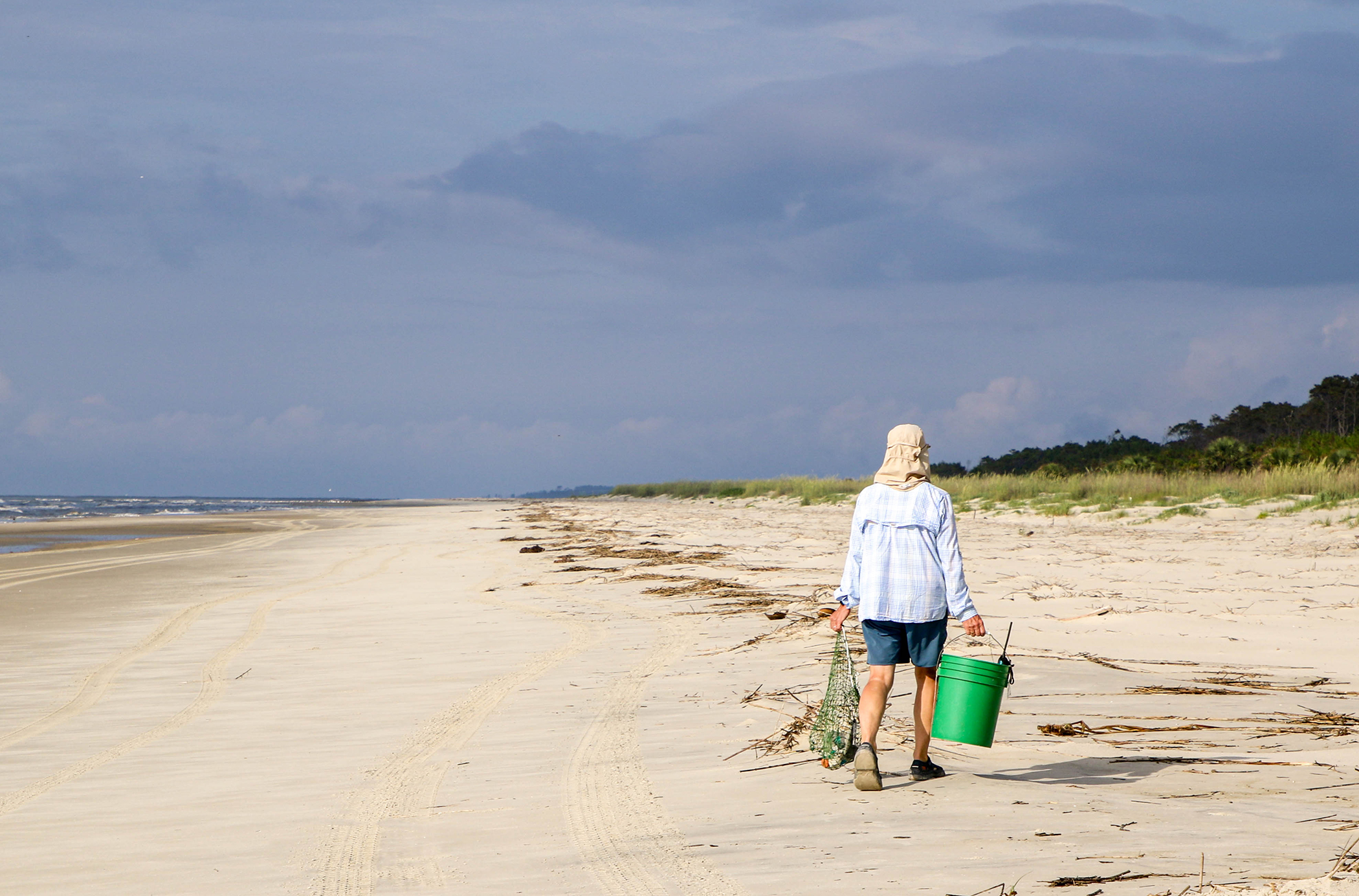 In an effort to produce more bags for outreach efforts, Sanders teamed up with the South Carolina Sea Grant Consortium to recruit additional shrimpers into the program. As of January 2022, 15 shrimpers in both Georgia and South Carolina have earned a total of $30,700 for 1,535 bags.

“This opportunity came along at a great time, in that shrimpers are making the bags in between the peak of the brown shrimp season and white shrimp season, when landings and income are lower than the rest of the year,” said Graham Gaines, living marine resources program specialist at the South Carolina Sea Grant Consortium and partner on the project.

With more than a thousand bags in hand, Sanders and other educators at the UGA Marine Education Center and Aquarium on Skidaway Island have been working to distribute them to the public through education programs and community science efforts.

“We’re educating and engaging ecotour guides, students, recreational boaters beach goers and others who can make a difference by alleviating the impacts of marine debris,” Sanders said.

As part of their outreach effort, the team launched a Marine Debris Community Science Program, which engages volunteers in removing marine debris from barrier islands and salt marshes along the Georgia coast while tracking what they collect using the Marine Debris Tracker App.
Since April 2021, community scientists involved in the program have conducted more than 25 marine debris cleanups across three sites on the Georgia coast and collected thousands of items.

They are also working with ecotour guides who have been certified through Marine Extension and Georgia Sea Grant’s Coastal Awareness and Responsible Ecotourism program. The guides are providing bags to their customers and encouraging them to collect debris while exploring Georgia’s beaches and barrier islands.

This summer, educators will deliver hands-on after-school programs to Boys and Girls Clubs in Chatham and Glynn counties, educating the next generation about marine debris and encouraging them to make a difference by using the Trawl to Trash bags to clean up their communities.

“These efforts illustrate and reinforce the importance of building community capacity and encouraging behavior change as a way of supporting the long-term prevention of marine debris,” Sanders said.