While women are still fighting to be considered totally equal to men in many areas of life, there are a few special women who operate in careers that have been traditionally dominated by men. 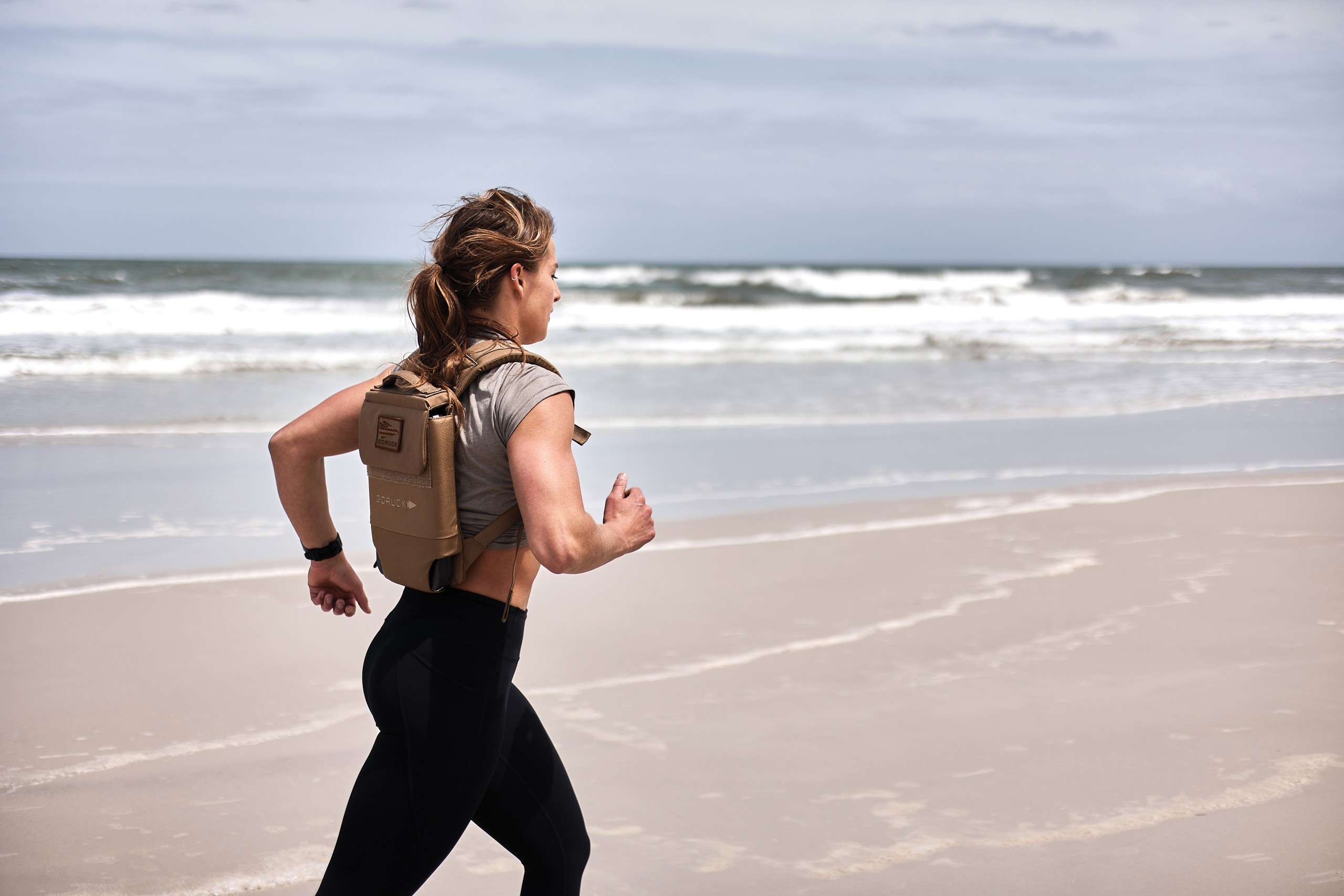 While women are still fighting to be considered totally equal to men in many areas of life, there are a few special women who operate in careers that have been traditionally dominated by men.

To truly know what makes Katie Knight the kind of champion she is, you need to dig deep. But digging deep, whether it’s to snatch victory from the jaws of defeat or to give a client the motivation they need, is what she does best.

You never know what’s going on inside someone’s world.

That person sharing a bench with you at Wright Square might be the next President. Your neighbor down the street might be really into animal husbandry. And, if you’re taking a graphic design class at Ithaca College, you might just be classmates with an extreme athlete who will (and has) choke out a competitor for a shot at glory.

In fact, you almost definitely are.

And Katie Knight proved it, dominating a fierce field of competition during the GORUCK Games this past April in Jacksonville, Florida.

For the chronic athlete who has tested herself in 24-hour races, Tough Mudders and Spartan races, it means a lot when she tells you, “GORUCK is one of the toughest events I have participated in.”

For the uninitiated, The GORUCK Games are a series of grueling events modeled after the sort of mettle-testing training that special forces go through. Pushing physical strength, agility and endurance to the test, these events run the gamut of running, sprinting, jumping, rowing and rucking.

To earn her victory, Knight battled through seven events which put her in the elite eight going into the O-Course. And if that wasn’t enough, she then had to prove herself in the “Air Assault” rope climbs, carrying a 45-pound rucksack. But it was the surprise event where Knight may have had the most fun: one-on-one combat. “They allowed submissions, so I choked her out,” stated Katie matter-of-factly. 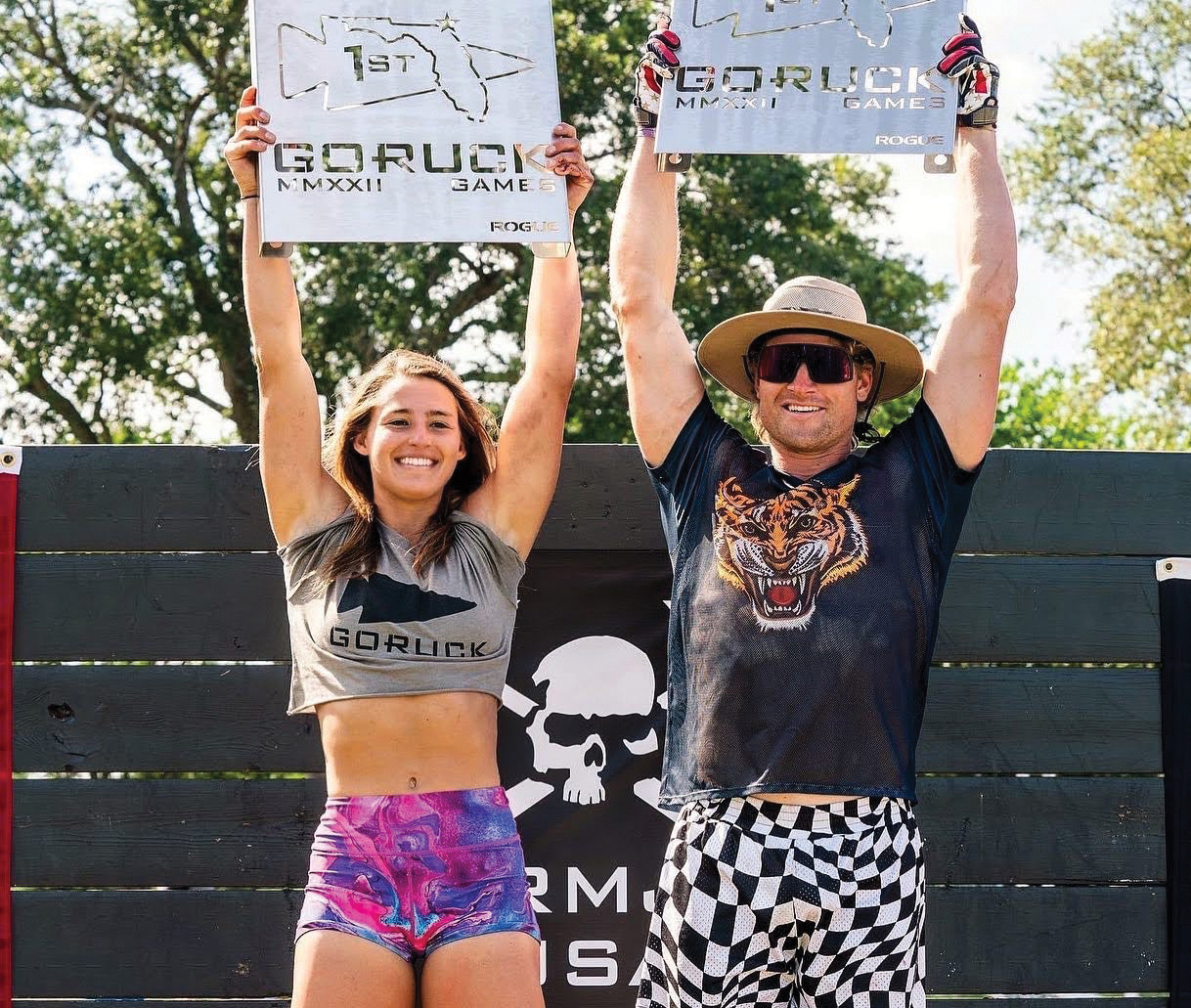 If that seems aggressive, you should know that Knight tore up the ice in the NCAA playing ice hockey. But that’s just part of her fitness resume. “All day, every day, what made me the happiest was fitness,” she said. That means CrossFit, running 50-mile ultra races and expanding on her own brand as an in-demand personal trainer. Working with clients like Google, she has shown a talent for bringing her own boundless grit and motivation to her clients.

“I get a lot of people that just cannot find the time or commit. I tell them to just start no matter where you are in your journey. Run for 10 minutes one day, 20 the next or get a partner, buddy or community,” she said. “Have fun with it and that will keep you going.”

That she finds time to do all this – balancing clients around the country, testing herself in one race after another, and putting in the work each day – is impressive enough. Add in pursuing her undergrad in graphic design and you have someone who seems to be operating on a different level from us mere mortals.

If you’re not jealous yet, she also maintains a perpetually youthful energy. At 30, she is often assumed to be in her early 20s. “I get that a lot,” she said with a laugh.

Think you are GORUCK Fit? Go to goruckevents.com to enter their next event. 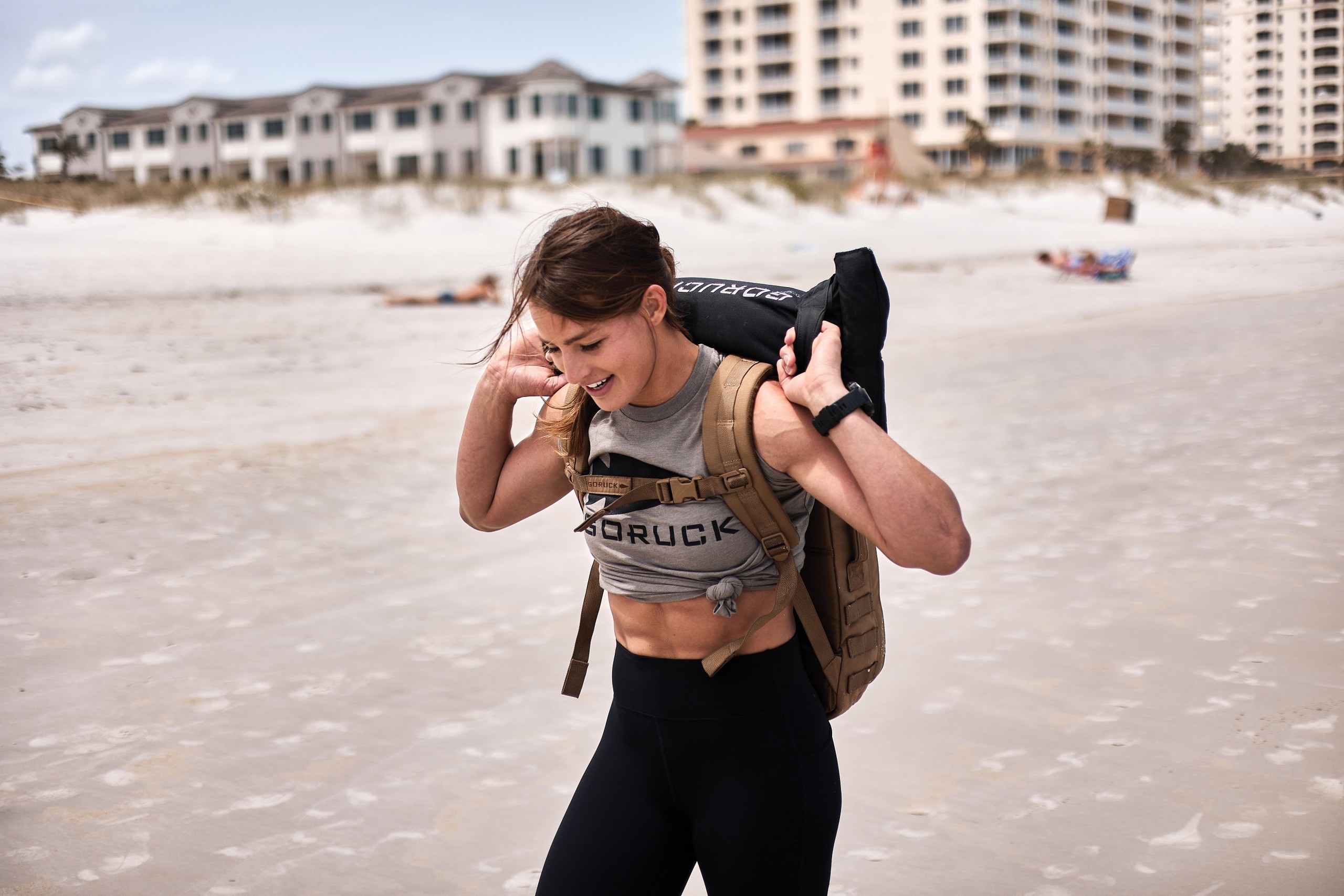 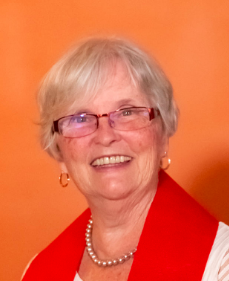 Diane Dougherty is passionate about her calling to be a priest. She was ordained in the Association of Roman Catholic Women Priests (ARCWP) at a ceremony at First Metropolitan Community Church in Atlanta in 2012. When asked if the ordination is valid, Dougherty replied, “I’m being validly ordained in the line of Peter, but it is not recognized by the church hierarchy, even though there is archaeological evidence that women were once priests.”

Having lived a full life of service, from being a nun to becoming a teacher, Dougherty feels that the Catholic Church is the “biggest systematic oppressor of women in the world” and she is determined to clear the way for future generations of girls to be priests.

Even though her battle to be officially recognized by the Church is still not won, in her retirement years Dougherty is determined to keep fighting, seeing herself as a “beehive poker.”

“I think they need to become the inclusive Church that repairs the damage that was done in years past, by its own racism and sexism, and homophobia and xenophobia,” concluded Dougherty. “I will continue to be an advocate and I currently have a radio show called ‘Take a Stand’ where I interview activists that are pushing the margins of society to build policies and practices to end all types of discrimination.” 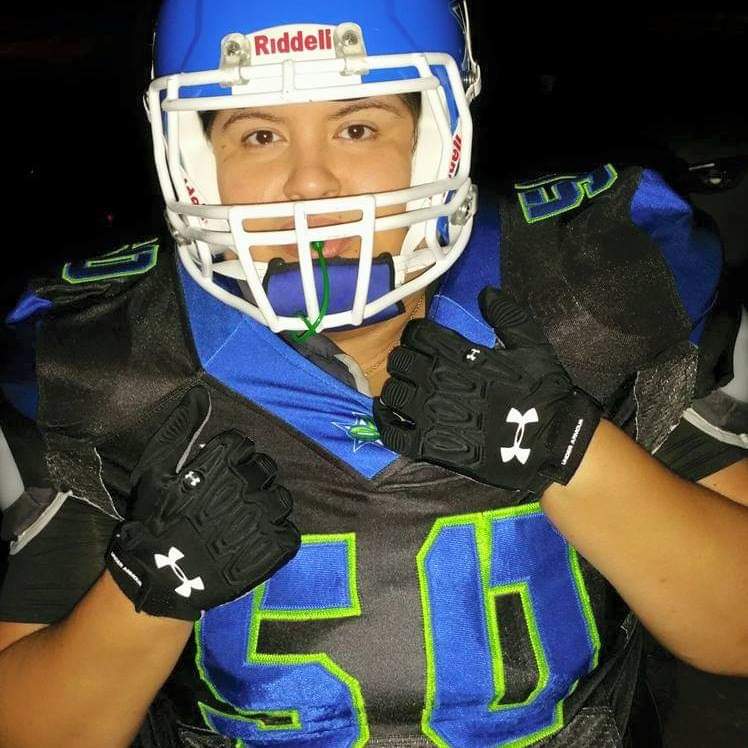 For 15 years, Yordania Granger, called Jordi by her friends, was a competitive football player for the WFA, WNFC and USWFL, playing at a very high level. Now retired, she is making her way in the corporate world with a business that handles HR consulting called CoAdvantage.

While Granger only made a fraction of the money her male counterparts made as professional footballers, she is encouraged by the small, incremental progress that the female football league is making, starting with a channel on DirectTV dedicated to women’s football.

“It is nice to see that women are still playing and that they are making headway in being taken seriously,” said Granger.

One of Granger’s proudest moments in her fight to have women’s football taken seriously, was when her team came off the field after a practice to hear a major professional footballer express surprise when they took off their helmets and he saw they were women. “He thought he was watching a team of teen boys play – he didn’t think women could play that well!”

Granger feels that her time on the team gave her valuable life skills that she is still applying in her everyday life. “One of the most valuable lessons is to not make decisions based on first impressions.” 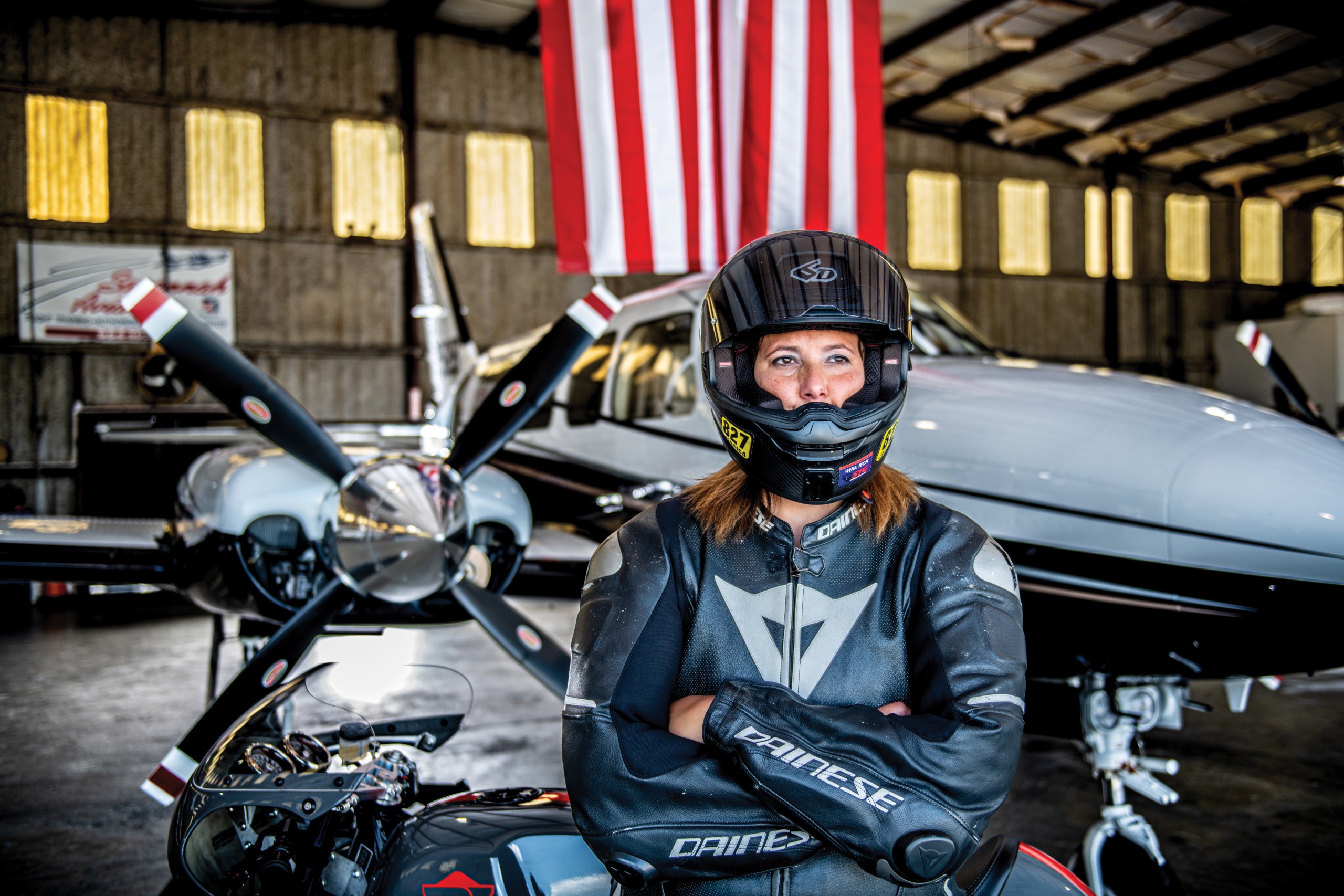 Falling in Love with Racing

Jessica Martin fell in love with motorcycle riding in the early 2000s, a love affair so strong that she went to work in a custom chopper shop in college “just for fun” and, of course, to make some money. In 2005 she got the opportunity to take her first ride on a racetrack.

“When I went out on the track for the first time, I just instantly fell in love with it. It did something to my soul, and I knew this was something I wanted to do,” said Martin. However, on the same day her boss totaled her bike and life moved her away from racing.

Fast forward to 2015, and Martin again had the opportunity to take to theracetrack, falling in love all over again. “Racing re-energized my soul and just made me happy,” said Martin, and Martin was able to proceed to club level racing and eventually formed Hotmess Racing with Nicole Pareso.

COVID made a dent in the possibilities, but Martin continued her dream and completed her first professional race in May of 2022. She is also working on providing opportunities for other women riders through Royal Enfield’s Build, Train, Race program. 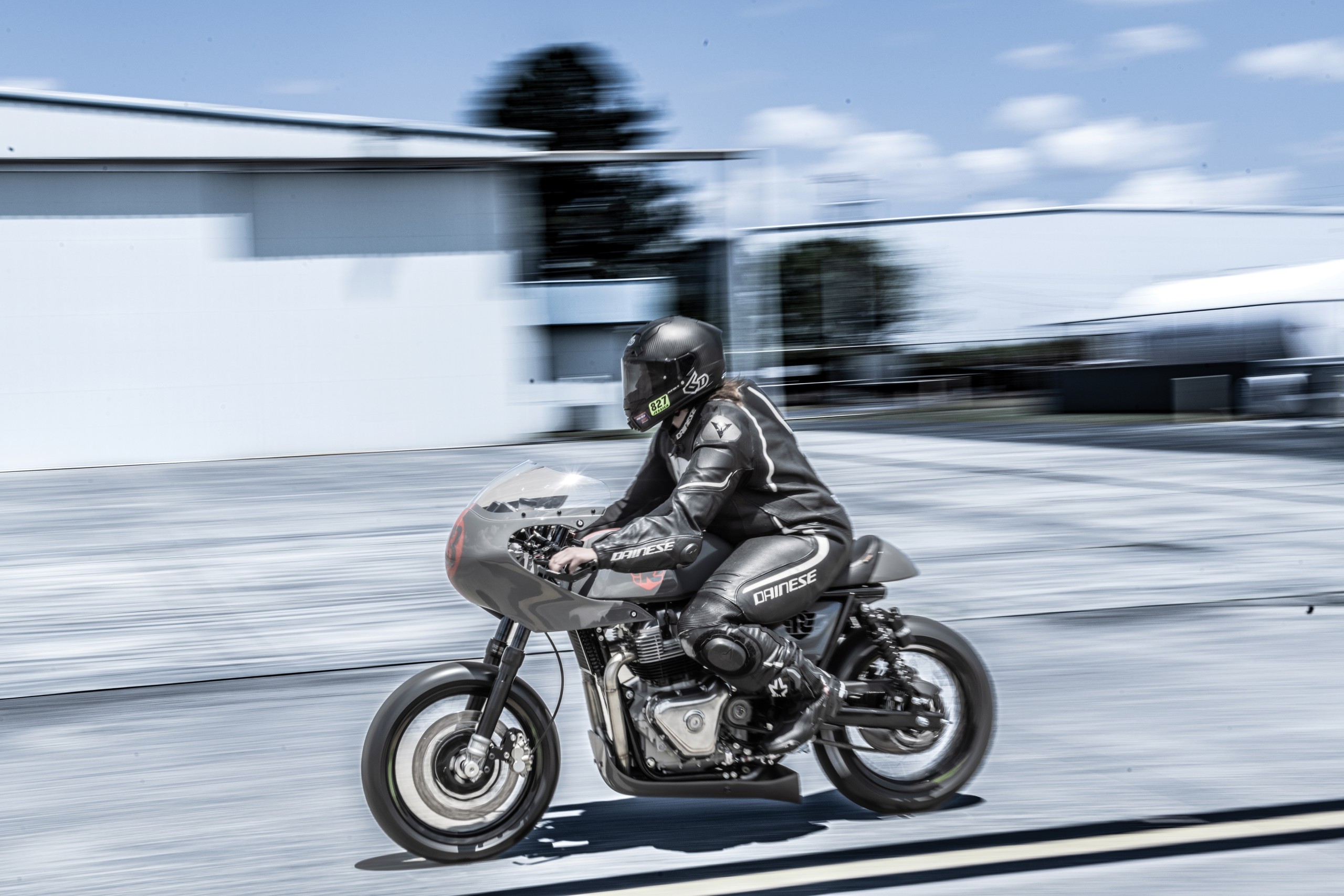 After almost 20 years of being involved with the industry, Martin has seen a few changes.

“While I have had men be very encouraging, the majority of them don’t feel that we belong in their sport, and there are still only a handful of women who participate. One of the things we kind of joke about as women in the sport is we’ll say that men have ponytail syndrome –  if they see a helmet and there’s a ponytail hanging off the back of it they tend to react!”

Looking to the future, Martin is driven to continue to open up opportunities for women in the sport of motorcycle racing. 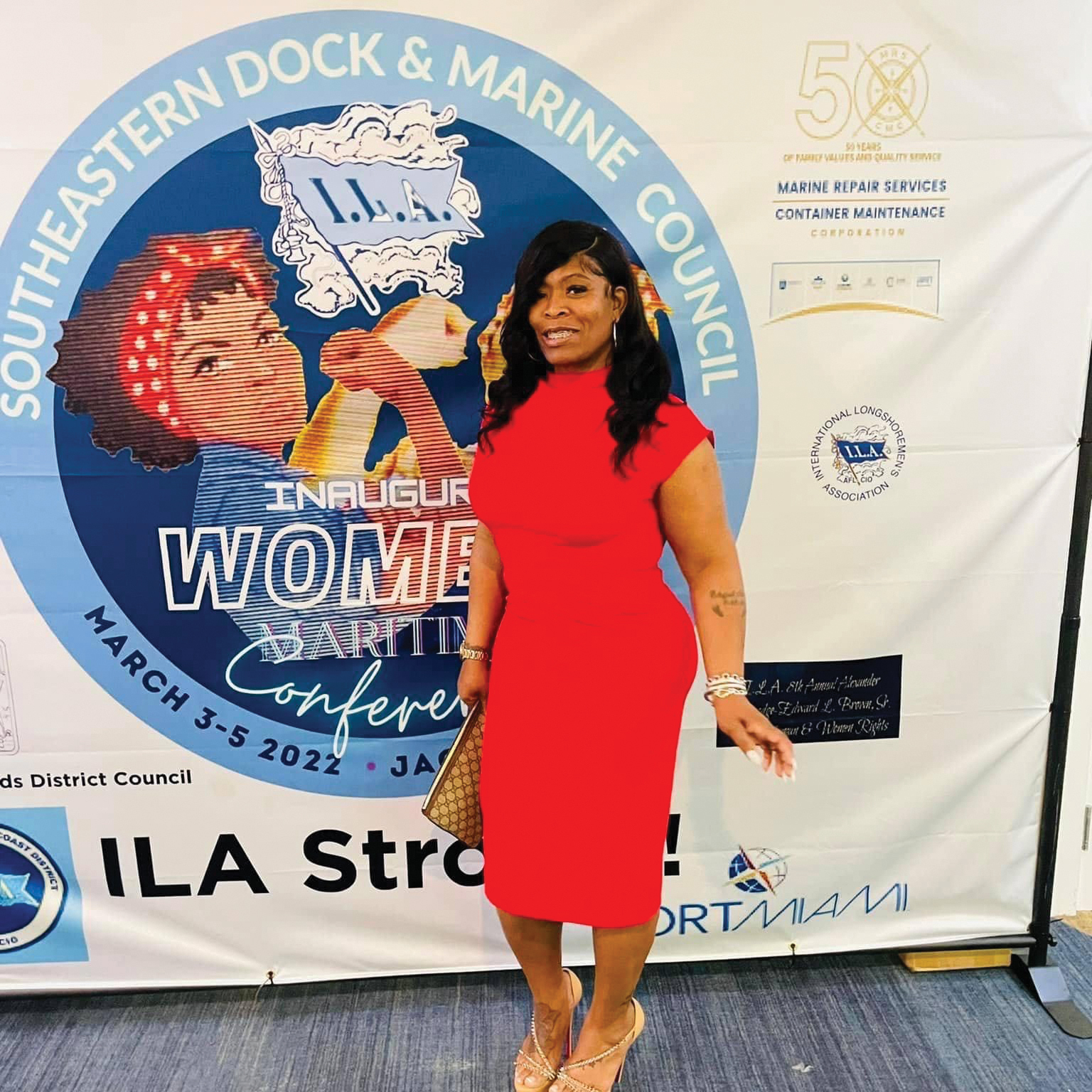 Shebbie Davis created history recently, when she became the first female header at the Georgia Ports Authority. As a header, Davis manages port crews as they unload and transport cargo shipments from the ships docked at the port.

“I am the third generation in this career,” said Davis, a 20-plus-year ports veteran herself, and member of the International Longshoremen’s Association (ILA) 1414, the largest union of maritime workers in North America. After starting out her working life in more traditional roles, in 2002 she looked at her family history of longshoremanship, starting with her grandfather, and decided that this was the career path she wanted to take.

“I’ve always heard my granddad talk about longshoremen, and one day I decided I will go to the longshoreman hall and get my card, and apply for a job,” said Davis, who started with the Ports Authority when there were only four women working there. “I feel like I’ve paved the way for a lot of other women to be able to come here.”

After putting in almost a decade of hard work, Davis has found herself in a position of managing males in a very male dominated career. Has this caused a problem? According to Davis, she has experienced very little push back.

“I’m very friendly, so when I give my directions to the men, they do well because they know I’m a good person and I treat them with respect and I get respect in return,” said Davis. “I get nothing but a lot of love because the guys know I put in the hard work to get to where I am.” 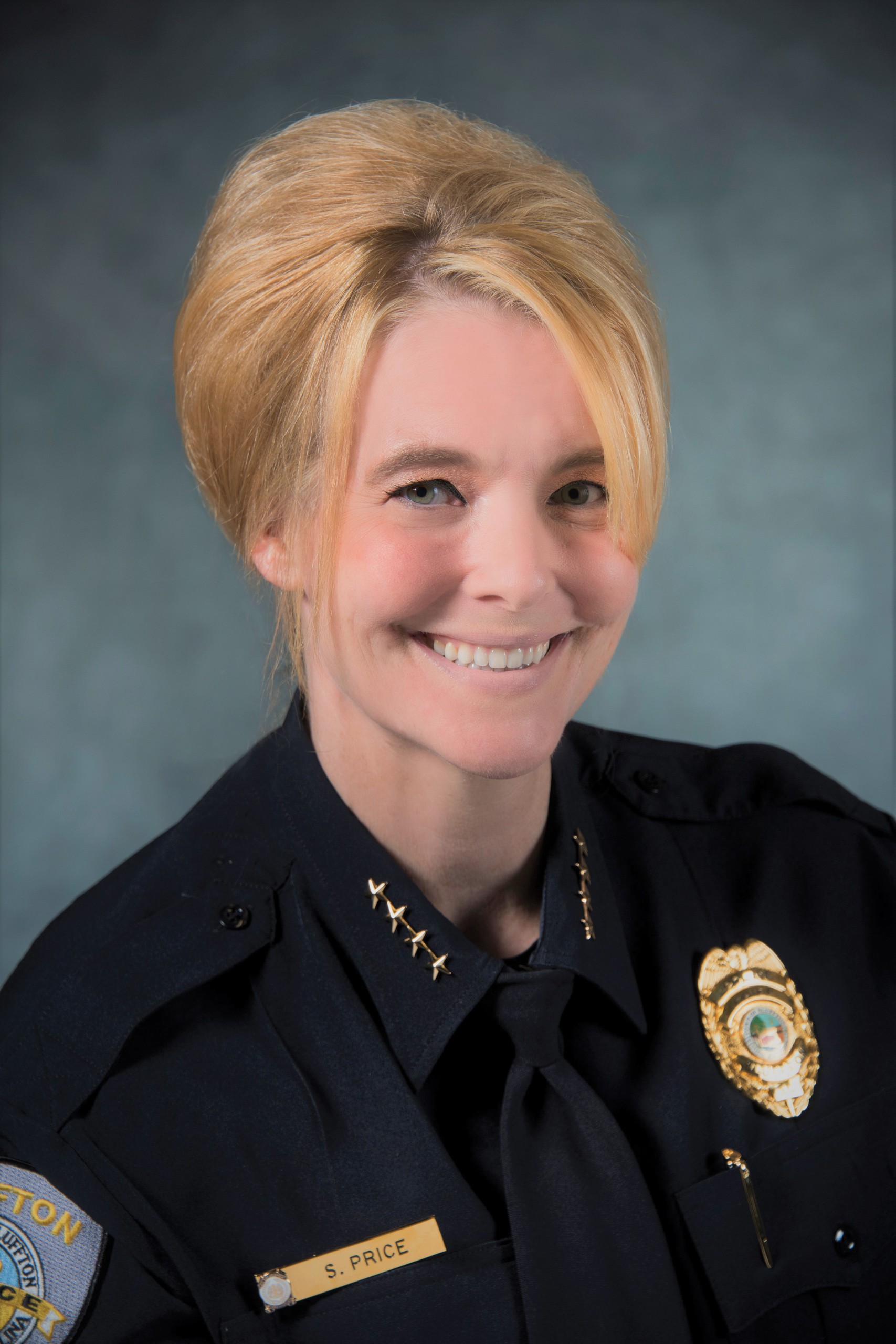 A 20-year veteran of the Kansas City Police Department, Stephanie Price moved to Savannah as the Assistant Police Chief before taking up her role as Chief of Police in Bluffton in 2020.

“Being a police officer doesn’t know any gender. But I’ll tell you right now it feels good to be the first female police chief, especially in Bluffton,” said Chief Price. She has joined the ranks of only 3% of females who hold executive jobs in law enforcement in the US.

Price has a BA in Criminal Justice from Park University and an MBA from Benedictine University. She worked her way up through many departments from patrol, before serving as the Assistant Chief of Police in Savannah, and then on to Chief of Police for Bluffton.

“When I first started on the force, there weren’t many females and the ones that were there saw other women as competition,” said Chief Price. She feels her ability to communicate well has served her in navigating the hidden tripwires of being a woman in a traditionally male career.

“I was just watching a TED talk today, regarding leadership challenges for females, and about how you have to be likable and friendly if you’re a female and if you’re decisive, they automatically think you’re very adversarial,” said Chief Price.

Her advice for women who want to make it on a police force? “Be ready for that next job and the one beyond that. Get prepared now for what you want to be later. But be the obvious choice by the time the choice comes.”