Leave It To Leva 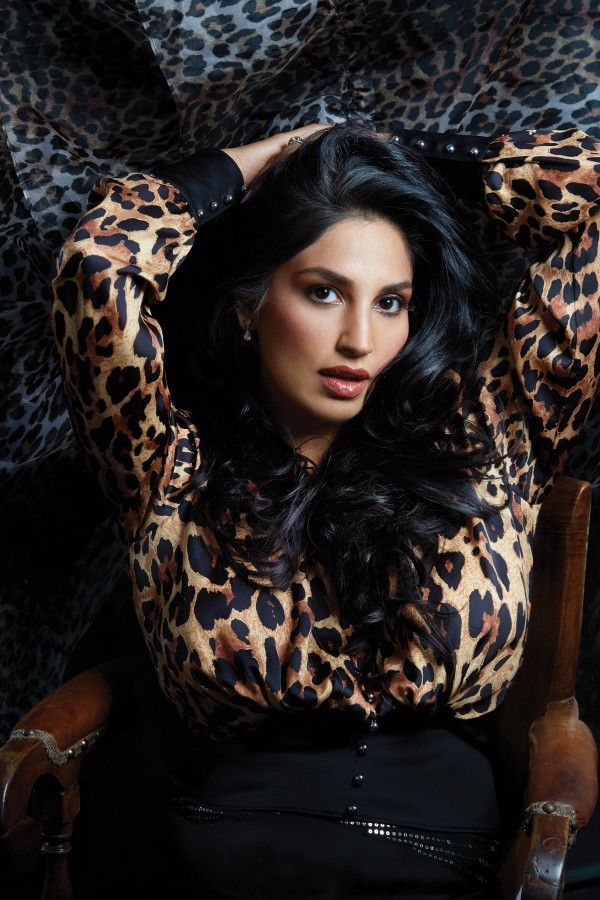 “My wish for everyone is that they get the opportunity to embark on their own difficult, messy, imperfect journey to greatness.” 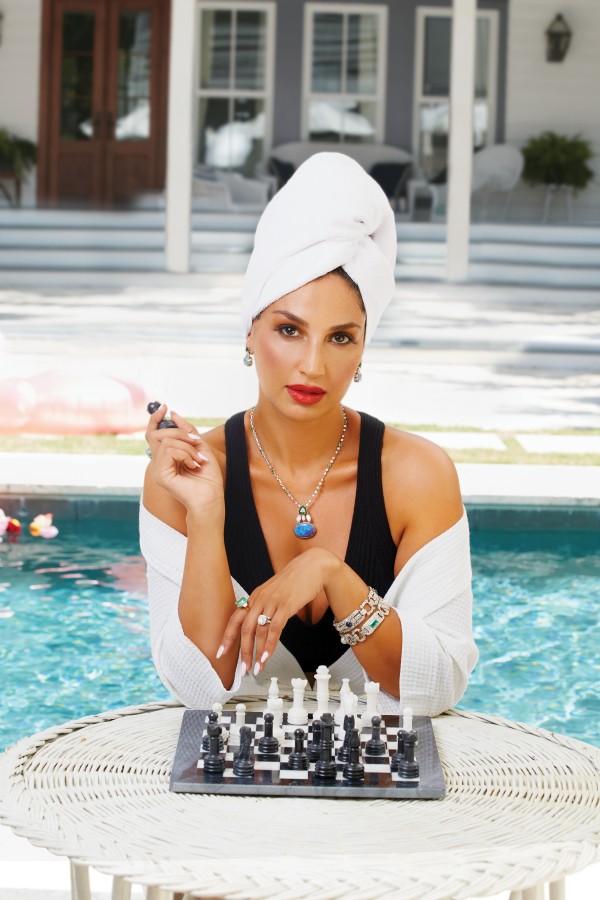 It didn’t take Leva Bonaparte very long to assert herself as one of the most compelling characters on “Southern Charm,” no small feat in itself considering the Bravo TV drama that has embroiled the cast of Charleston elites since the first episode.

Joining the show as a full cast member after running in the same social circles as the Charmers for years, Bonaparte has infused the show with an outsider’s perspective. Part of her mission in joining the limelight? Challenging the culture of the old South to be just a little more inclusive. Her first target was fellow cast member Kathryn Dennis, who had caught the ire of the Twitterverse last year following some racially charged comments.

Bonaparte made it clear to Dennis that her comments and inaction toward the fallout were not OK, and needed to be dealt with head on. “I told her that I was her only lifeline, that everyone else around her was pretending that it didn’t happen.” Bonaparte acknowledged that she saw Dennis as a friend, and as such, was standing right beside her while also calling for accountability.

As someone who is in a bi-racial marriage, Bonaparte felt she was in a position to have the conversation with Dennis. “I have the bandwidth because I can see [the issue] without being triggered as I do not have the generational trauma. However, I saw it as my job to have that conversation with her and express my frustration with her not issuing an apology, being flippant and just assuming it would go away. We needed to address it as friends and use the platform of the show to illustrate that we can have these hard conversations. I think that Kathryn and I have learned a lot and we have come a long way.”

This exchange sparked many more conversations on the show about race relations in the United States, and Bonaparte sought the topic’s context by studying the history of U.S. racism. Her husband Lamar is Black, and the couple has a young bi-racial son, bringing the issue even closer to home.While Bonaparte hopes that people understand her motivation, some cast her as a “race-baiter” as social media back-and-forth persists. Others say the Charleston entrepreneur cannot really understand because she is not originally from the South.

However, dealing with different races and the issues that come with it is part of the fabric of Bonaparte’s life. Born in India to Persian parents escaping the regime change in what is now known as Iran, she was transplanted to Canada at the age of three when her parents were warned not to return to Iran. There she learned of the importance of community and hard work, growing up with other Persians unable to deal with the radical changes brought about by the fall of the Shah.

“We lived in a large apartment building where almost every day we would get a letter saying that an uncle or cousin was coming and could we help them get settled,” said Bonaparte. “My parents never hesitated to help. They always remembered what it was like when they arrived, not knowing the language and even though they were highly educated, in the beginning the only work they could find was manual labor, mostly because of the language barrier. My dad worked the night shift at McDonald’s and my mom worked in a factory.”

Her parents inspired her to reach beyond the traditionally-feminine expectations of settling down and raising a family. “I saw how they took a difficult situation where they landed in Canada with only $25 in their pocket and through hard work and dedication, they built a multinational software business. They took great leaps that took them far from their humble beginning. They are my inspiration; they are the reason that I have been able to live my greatness. Living your greatness does not mean everything is perfect. You are going to stumble, and things will not always come easy, but my wish for everyone is that they get the opportunity to embark on their own difficult, messy, imperfect journey to greatness.”  Bonaparte is grateful that her parents were not the traditional Eastern-style family, expecting her to follow a more culturally traditional way of life.

You could almost say it was fate that decided where globetrotting Bonaparte finally settled. After almost a decade of traveling the world as a sales representative for her family’s software company, splitting her time between Canada, Bolivia and the United States, Bonaparte found herself going to Charleston on a regular basis as a small office had been set up there to service one of their clients.

While her first visit to Charleston was a bit underwhelming, she has grown with the town and now would not consider living anywhere else. And, of course, this is where she met her husband Lamar, who was born and grew up in Charleston. “Lamar was quite well-known and had been involved in a lot of downtown real estate development, but I just saw a guy I didn’t know who wanted me to go out with him.” When Bonaparte actually pulled out her phone and Googled him (right in front of him) after he introduced himself, he labeled her as “special” and “extra.” However, he was determined to continue going through the hoops that Bonaparte put him through, including taking all of her roommates on their first date.

Bonaparte was determined to learn from Lamar and to keep the relationship on a “just friends” basis. True to form, she did not follow the traditional trail of dating, engagement and then marriage – she began things with Lamar as a friend and business partner, investing in real estate with him and helped him produce amazing fundraising events for various nonprofits, coining the phrase “Party for a Purpose.” “My friends could not believe that I owned property with someone I was not married to.”

However, one Tuesday in 2013 they decided they wanted a life together and eloped. “We didn’t have time or the budget for a big wedding. We had a few friends who were offended, but this is what worked for us.” Bonaparte soon found herself managing renovation projects on several Airbnb’s, and getting neck-deep in the interior design of their new restaurant. “It was amazing to be able to have a clean slate and to build a totally amazing place that everyone wants to come to.” Today, they own four restaurants in downtown Charleston – Republic, Bourbon N’Bubbles, 1st Place Pub and Mesu.

However, on the way to building their own little empire, the Bonapartes decided to begin a family. After many attempts and much difficulty, little Lamar arrived in 2018. “I thought that not much would change – that I would just get a nanny and keep on working – and then he arrived, and I found I could not put him down.” For the next year and a half, she found herself immersed in motherhood, with only the occasional attempt to deal with business. “Lamar really had to step in and take care of almost everything. Once little Lamar started walking, I began to get back out there, putting him on my hip and visiting job sites.” 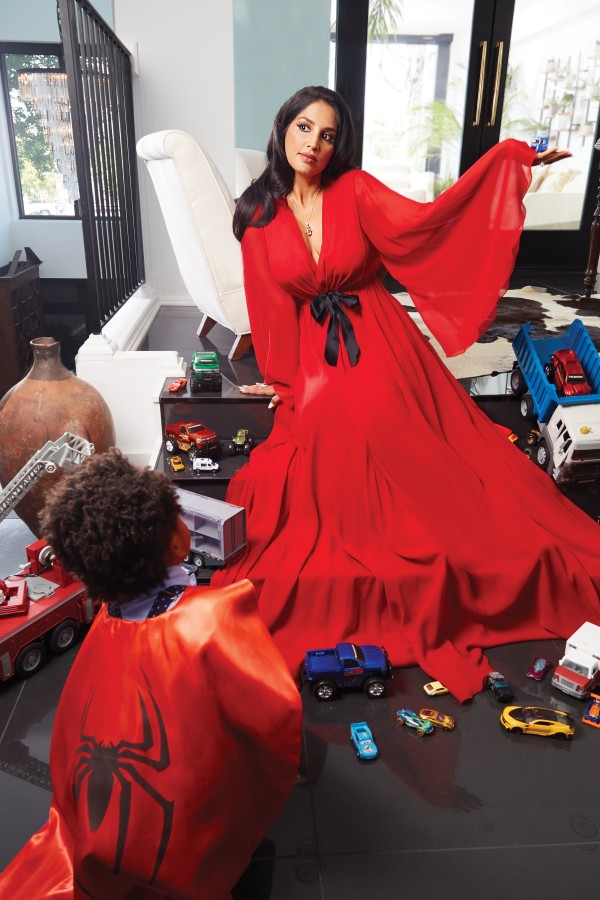 Somewhere between matrimony and motherhood, Bonaparte became a social media influencer with more than 111,000 followers. This eased the transition to reality TV and her stint on Bravo’s “Southern Charm.” “I had been friends with various cast members for years, and they had filmed in our restaurant on more than one occasion, but I was not ready to be officially invited to join the show. I was literally sitting in my restaurant with a senior person from Bravo thinking that they just want me to show up in a few scenes and they are like, ‘No, we want you.’ And my response was, well I am not Southern, to which they replied, ‘Well, you are Charleston!’”

While becoming a reality star was not on her “to do” list, Bonaparte could see the benefit of being on the show and being able to shine a light on her restaurants and nonprofit work, so she agreed to become an official cast member. “It ended up being a very nutty and insane season because there was BLM and there was COVID-19 so we shot for three months and then we shut down for three months and then we got back together again.”

After the episodes aired of her and Dennis addressing racial issues, Bonaparte was surprised to be recognized as a racial activist. “I’m not out marching the streets by any means, but if something resonates for me, I’m going to take my resources and stand behind it. Things that are important to me include our community, race relations and taking care of the children and those who have less. We will do as much as we have the means to do so.”

The concept of social media influencer was also one that crept up on Bonaparte. With more than 111,000 followers wanting to know what she is wearing and what she is doing, however, it dawned on her that the title is justified. “I am a businesswoman, but I do not wear power suits. My style is whatever I feel like at the time, and that is usually something very feminine. That is my style. I was always the little girl that liked pink and flowery things. It doesn’t always work, like when I’m doing a walk through on a property, but I’m in a position now where I do not feel like I need to bow to what other people think is business-appropriate.”