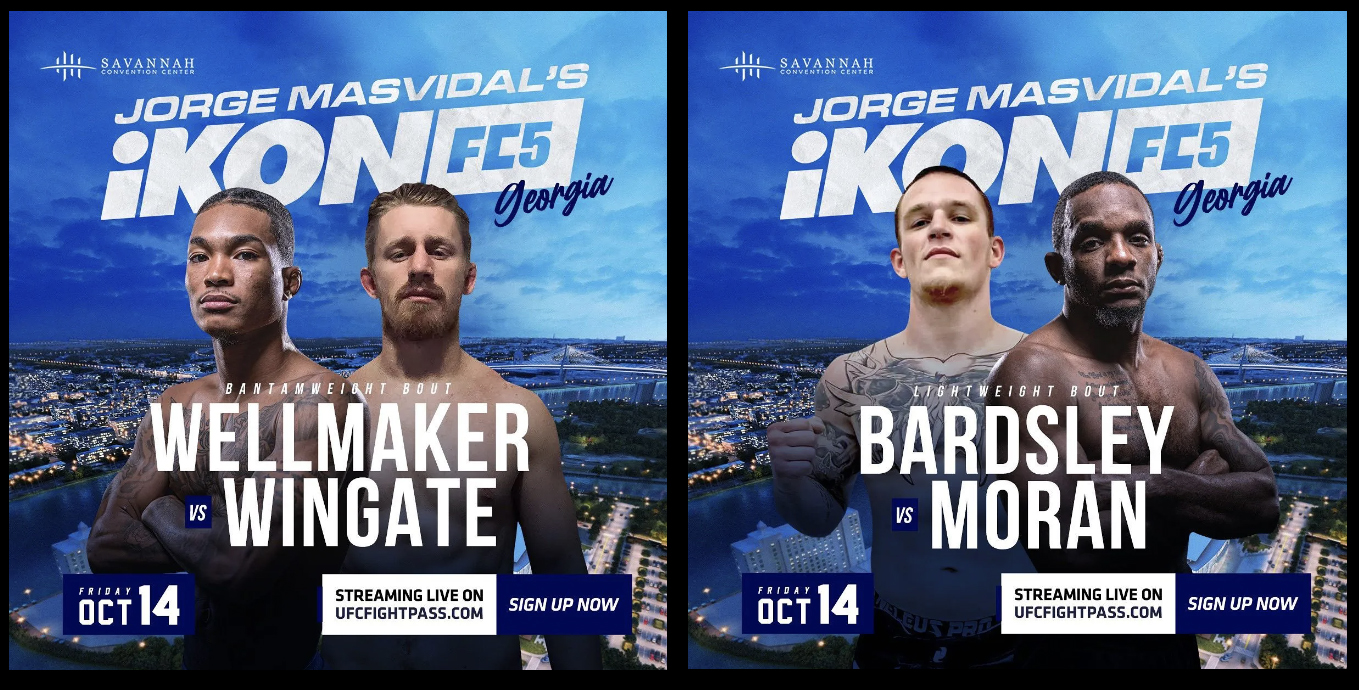 “It’s official, we’re coming back to Bananaland for iKON FC 5, said Masvidal. “Our last event was a sell out, so we are excited to bring more fights, more violence, and more fans back to the Savannah Convention Center – this time in a bigger venue.”

After giving his hometown fans a show-stopping performance at iKON FC 4, Savannah’s Octagon-bound Brandon Moran returns to the cage. Moran notched his pro victory after a thrilling three-round brawl, besting the tough Tyler Sigmund in a unanimous decision. Moran will square off with Lawrenceville’s talented up-and-comer, Mike Bardsley, who is also coming off his first pro win over Marcus Crawford.

On tap for the October 14th main event streamed live on UFC Fight Pass is a lightweight competition between Solomon Renfro (9-3) and Michael Irizarry (12-4). The Buffalo-born Renfro made his pro debut in 2017 and went undefeated for three straight years. He bounced back with two consecutive TKO wins in 2021, took a fight in the Dana White Contender Series and, in May of this year, notched another W with a decision over James Cannon. Looking for his way in to the UFC, “The Puerto Rican Power House” Irizarry is making his promotional debut with iKON FC. With far more cage-time and a longer win streak, Renfro is a dangerous foe and a serious threat to Renfro’s aspirations.

iKON FC 5’s co-main event action brings the featherweight match between undefeated Jose Torres and the 4-1 Abdul Kamara. The Chicago-based Torres, fighting out of American Top Team, has 23 wins across his amateur/pro record. His last bout was a unanimous decision victory over Blaine O’Driscoll in March 2021. Kamara, fighting out of Glendale, AZ’s MMA Lab, is coming off the back-to-back submission wins of a R1 rear naked choke over Ryan Mondala, and a R2 guillotine choke over Calob Ramirez.

In a highly anticipated clash, Chattanooga’s unbeaten as a pro and amateur, Torrez “The Punisher” Finney (3-0), faces Ivan “All Business” Batanich (5-2). Torrez is no stranger to high-level competition, having played D1 football on a scholarship at University of Tennessee at Chattanooga. He was named the best defensive lineman in the state and went first-team All-region and first-team All-State. An elite athlete, Torrez started practicing jiu-jitsu at Agoge Combatives and soon after made his MMA debut. Batanich is riding a three-fight win streak, and stands as the more experienced combatant having launched his MMA start in November 2016. He last fought in May, scoring a unanimous decision over Nor-Cal Fighting Alliance’s top prospect, Joaquin Lopez.

Also on the iKON FC 5 card:

AFTER THE FIGHTS: The iKON FC 5 official After Party starts at midnight and goes until 3:00 a.m. at Eclipse Nightclub, 127 W Congress St, Savannah, GA 31401.