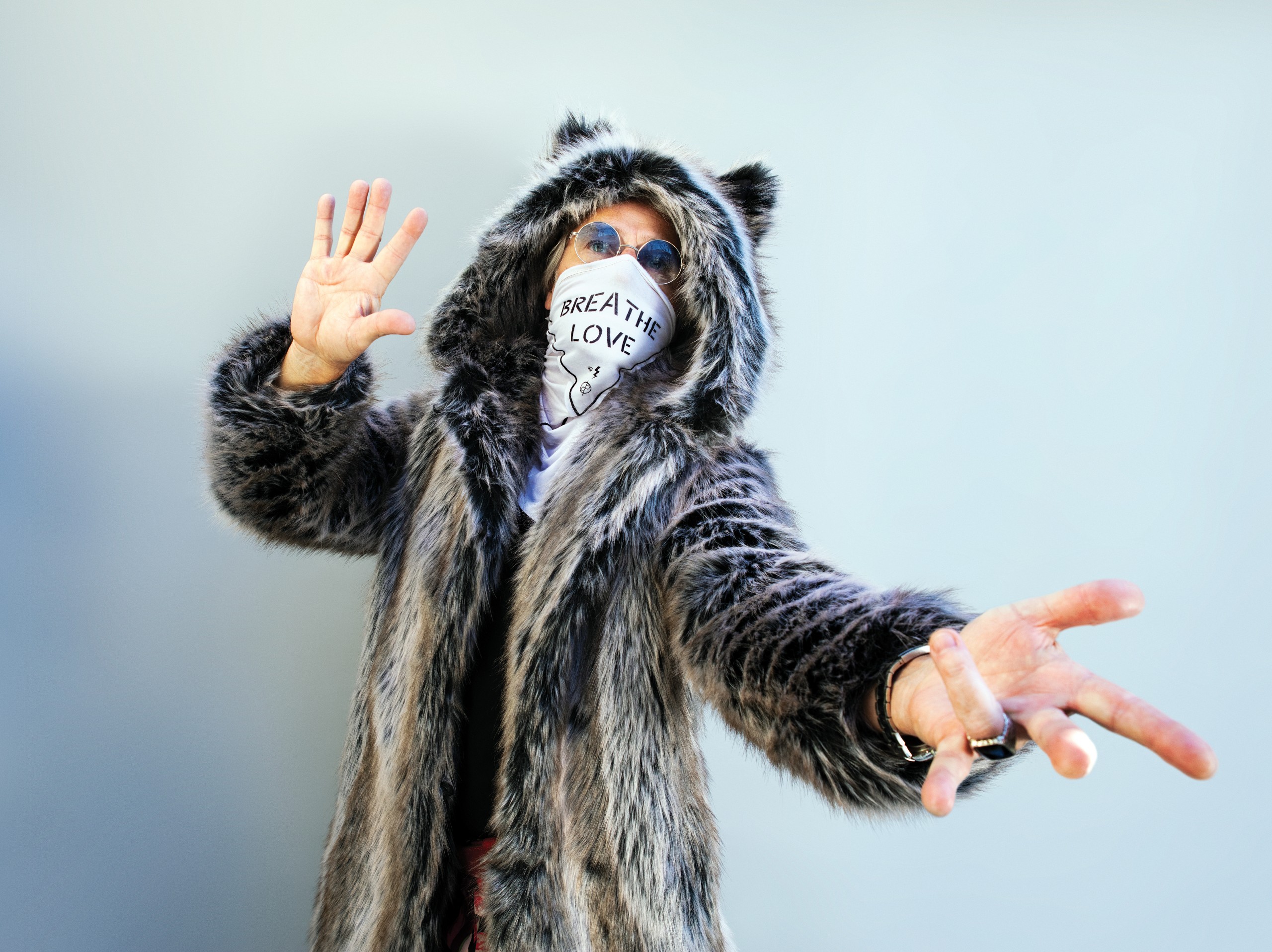 Collective Soul frontman Ed Roland has seen the world from the dizzying heights of rock and roll stardom, but he’s still just A good old Southern boy raised on faith, family and music.

As Ed Roland leisurely reclines in a wide wingback chair in the grand front lobby at the Old Town Bluffton Inn, his legs crossed in a pair of faded jeans that flare down toward a pair of high-top Converses, he seems very much like a man in his comfort zone.

And as a Southern boy born and bred, he is.

“(Bluffton) reminds me of Stockbridge, Georgia, where I grew up,” he says. “It was very Mayberry. And I mean that with respect.”

His road to Bluffton was a unique one. Unlike many who visit from the Northeast or as a daytrip during a Hilton Head Island vacation, Roland’s first introduction to the town came when the Grammys sent him and his wife on a vacation to Palmetto Bluff. “Which is funny,” he adds. “Because I’ve never been nominated for anything.”

That lack of a Grammy nomination is either surprising or typical, depending on how dim a view you take on the Recording Academy (these are, after all, the people who gave the inaugural heavy metal Grammy to Jethro Tull). Despite having hit the top 20 on the Billboard charts in four different decades with his band Collective Soul, the closest Roland has come to a Grammy win is when Dolly Parton’s cover of “Shine” won for Best Female Country Vocal Performance.

“I had the greatest childhood ever. We had no money, but that wasn’t what it was about. It was a house full of love,” he said. “I didn’t know we didn’t have money. I didn’t give a [crap]. I still don’t.” -Ed Roland

In some artists, such continued snubbing after a legendary career might lead to bitterness. But for Roland, he got a trip to Palmetto Bluff out of the deal so he’s coming out ahead. “We fell in love with it. This is a very spiritual place for me… we come down here all the time.”

In fact, on this particular trip to Bluffton, Roland had put an offer in on a house. And in true Ed Roland fashion, he brought along a small horde of cousins (“I always take my cousins on these trips because we grew up together,” he says), plus put on a show at the Roasting Room while he was in town. Continue reading in our interactive digital edition. 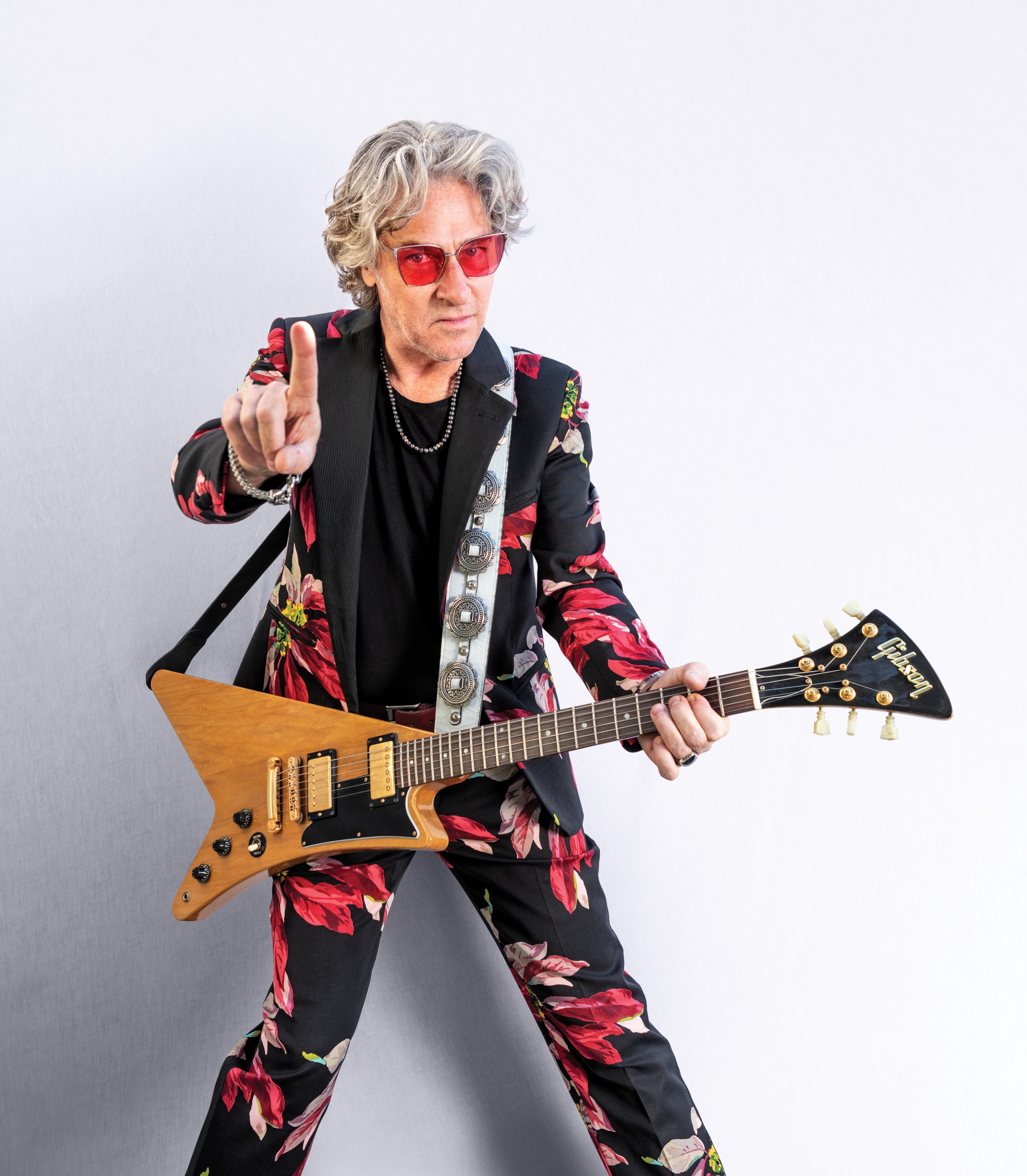 Q&A: Inside the mind of music icon, Ed Roland

South Magazine: Is it true that you recorded your debut album as a demo to simply sell the songs? We’ve also heard that you played and recorded all the instruments yourself, prior to forming a band. What was that like?

Ed Roland: It was all about survival for me at that point. I recorded that album in a basement on what was an eight-track [tape] and it was basically a batch of demos from a span of five years. There were a lot more songs but I just picked the ones that I thought would get me a publishing deal. “Shine” was one of them. It was done on a drum machine—I just played it on some drum pads.

S: You’ve released 10 studio albums and 37 singles. Rumor is, there’s more to come. Is this true?

ER: At the beginning of the pandemic I started a new band called Alien Attitude and we wanted to do something New Wave, so we did 10 songs there. There are also two Collective Soul records in the can, one is called “Vibrating” and the other is tentatively titled “Hearsay.” There’s another record for Collective Soul and another record that’s more piano-symphony based. So we are good for a while on songs.

S: Collective Soul worked on the album “Disciplined Breakdown” in a cabin in the middle of a cow pasture in Stockbridge, GA. At the time, Collective Soul was going through a legal battle with former management. Can you describe the musical process in that cabin, what was going on and how you got through it?

ER: That was at the height of our career at the time but we had no money—I can’t say where it went, but not to us. And I don’t thrive on money, but if I earned it then it should be mine. We were only being given $150 a week to survive on. So we were in a legal battle. My dad, being a pastor, knew someone that had a cabin on a 300-acre cow farm that had a wood-burning stove that you also cooked food over, and that’s where we stayed during the legal process for four to five months. It happened to be during winter, and it’s usually not crazy cold in Georgia, but that particular winter happened to be extremely cold. I had bought DATs (Digital Audio Tapes) for demoing; it was keeping me busy and sane. I was newly married and it was difficult—I would go out and cut wood in the morning, heat up the cabin, record and write and then do it all again that evening. I wanted people to hear the demos because that’s what we were going through. It was a learning process that made us stronger. It made me stronger, anyway.

S: Speaking of such a large volume of work, how are you able to write so many songs and stay fresh? Where do you draw inspiration?

ER: I dreamed as a child at age 14 listening to Elton John records, and Bernie Taupin, that I wanted to be a songwriter, and that was my job when the band started. We designated different jobs for the band and we each strived to be the best we could be in our role. For me, first and foremost, it’s being a songwriter. During the last year we made three albums in 12 months, and it’s all really good. We all just love what we do. 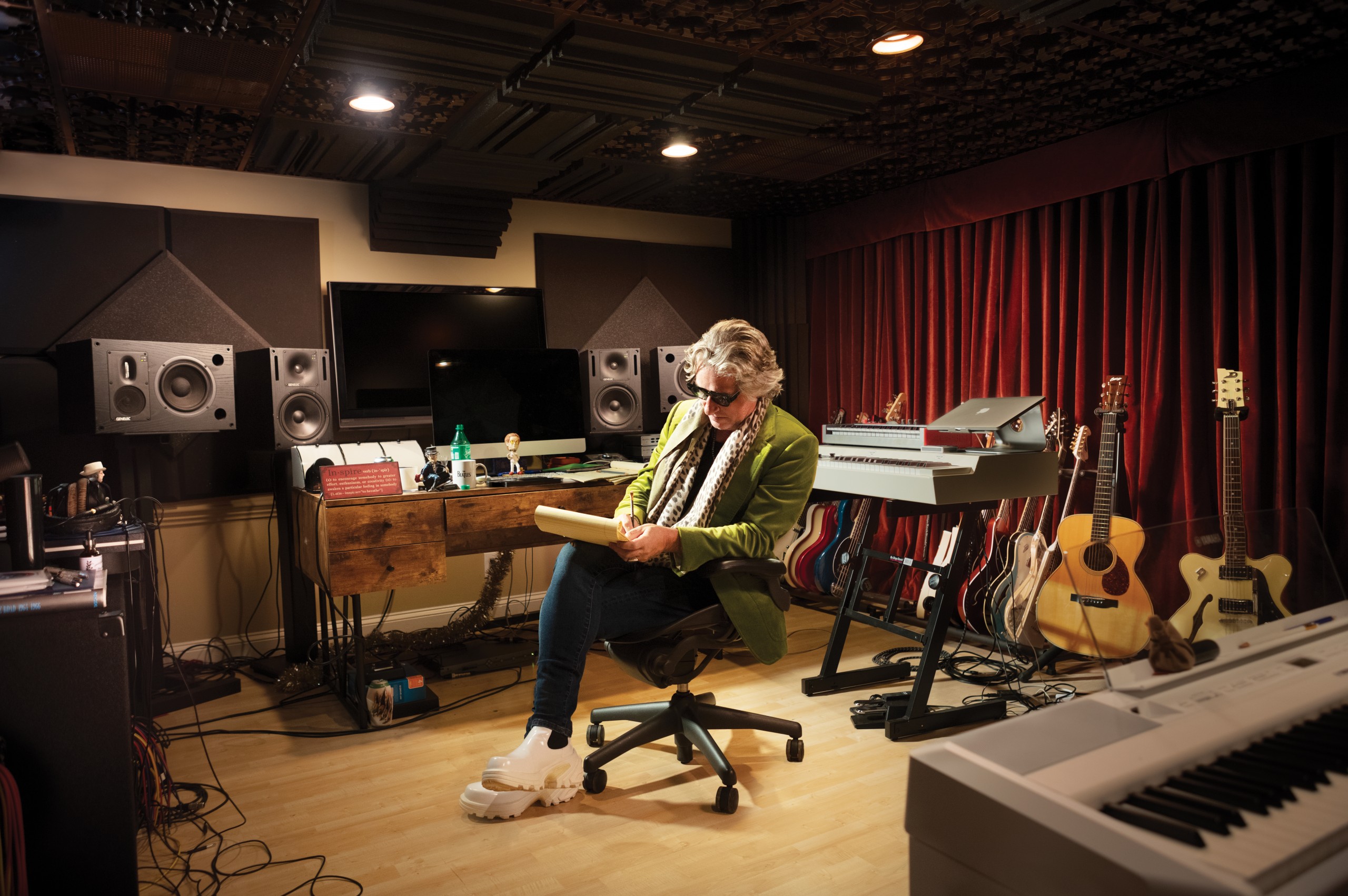 Ed Roland’s latest (pandemic-born) endeavor with New Wave band Alien Attitude is “The Living Room,” a full-length album now available on all streaming services. Check them out at facebook.com/alienattitudeband.

S: Can we expect anything unexpected, or experimental for Collective Soul?

ER: This piano record is one I’m really excited about. The guys love the concept and we always talked about doing it. I’m 10 years older than the rest of them but we have the same influences: ELO, The Beatles, bands with orchestration. I write a lot on the piano but these songs are especially written for the purpose of doing a piano record. It will be different. It’s tentatively titled “Chill.” It’s going to be… to chill out.

S: In a recent interview (2019), Billy Corgan had some harsh, expletive words for Collective Soul. Even more recently (2020), you told Cleveland.com that you “love Smashing Pumpkins.” Why do you suspect that Corgan holds such an intense grudge to this day? Did anything go down behind the scenes?

ER: Nothing went on behind the scenes. Honestly, I don’t know what that’s about. I’m just here to make music and I’ve always enjoyed what [Billy’s] done and does.

S: What was going through your mind when writing “Smashing Young Man”?

ER: I got the idea for that title when we did our first tour through England, and I was hearing that phrase “smashing young band” like in the Mike Myers “Austin Powers” movies. It’s got nothing to do with Billy or the Smashing Pumpkins. It was just a phrase I loved.

S: How would you describe the evolution of Collective Soul over the band’s impressive 25+ years in the industry?

ER: I would put us up against any rock band—and that’s not ego, it’s just confidence. You do anything for 27 years constantly and you should get better. If you’re not, you’re living the mundane life. You learn to gel with each other. We love each other. We enjoy each other’s company. Of course my brother’s in the band, but I call the guys two times a week to see what’s going on. That’s not your typical rock and roll story. We appreciate the opportunity that’s been given to us. We grew up together and that’s how we were raised.

S: What’s the secret to staying together? So often, we see bands break up far before 25 years.

ER: It’s tough for most bands that meet at 18, especially boys, with their testosterone, figuring out who’s going to be the leader of the pack. But we know each other so well. We know when to punch each other and when to hug each other. That just comes from growing up together and we have gone through a lot personally. We are friends and family. That’s what sustains us. And we all know we haven’t done the best that we can do yet—we strive for that musically.

S: What sort of independence came with creating your own record label, El Music Group?

ER: We were always independent, even with Atlantic, we just made our own music. Nobody even knew we were recording a record. I would go in and record it and then just show up in New York with a record and the label was excited. Independence is when you know your own weaknesses and strengths every day. Corporations aren’t with a band every day. We knew where our weaknesses were and tried to correct those, like putting a puzzle together. We put the band with the songs. That’s what we work on: making good songs. We are a song-based band. We decided that years ago. Album-based too. We complete an album every time. The boys are very vocal about that and nobody has an ego. We have just gotten better because we love what we do. 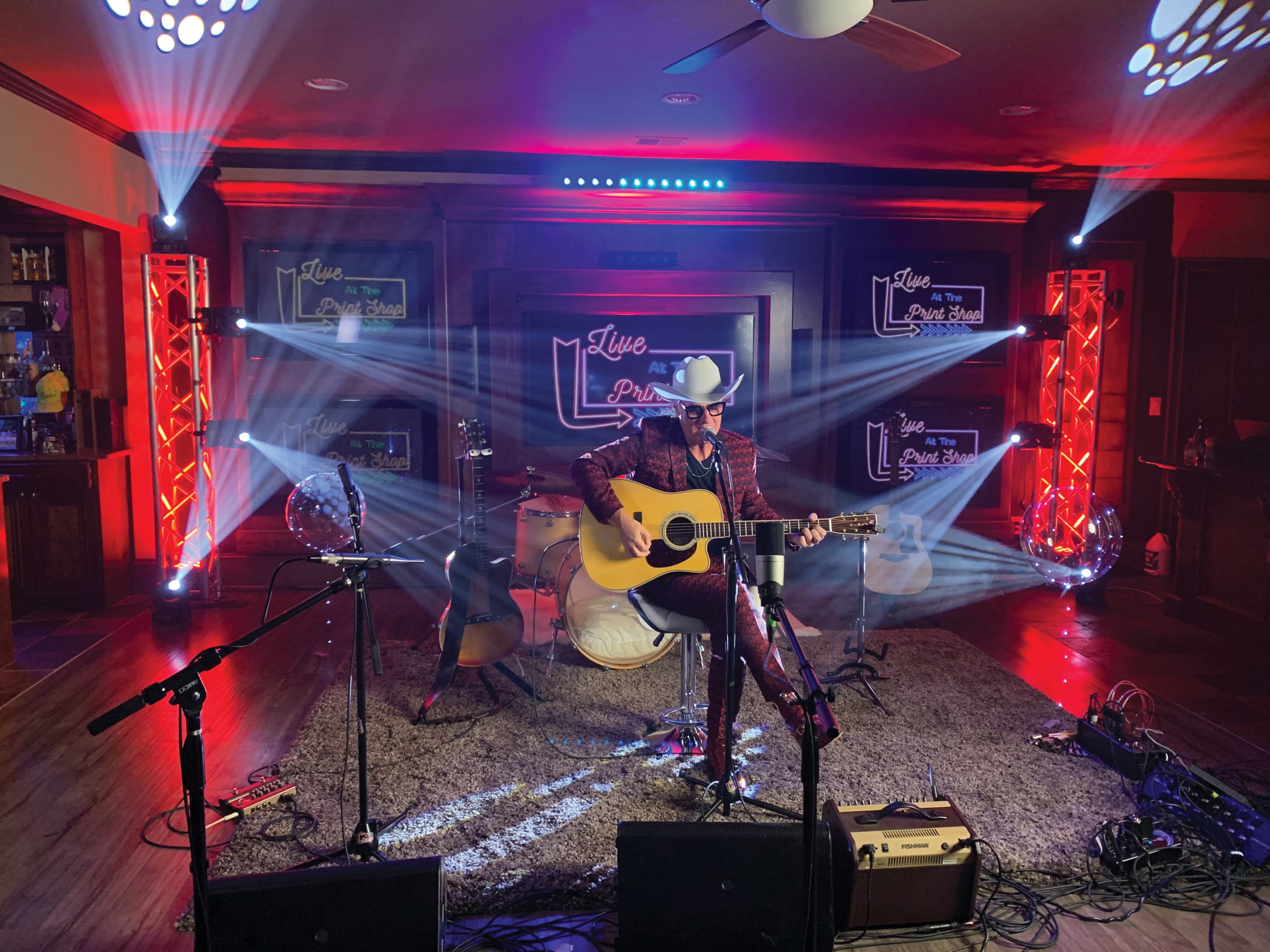 Roland recently performed at “Live at the Print Shop,” an online live concert series. View Roland’s performance, along with other rising and seasoned artists, at liveattheprintshop.com.