This season calls for trading in sweatpants and doing it up; as restrictions are lifted, so are restraints on fashion. As we roar into the rest of the 2020’s, think grandeur, glitz and glamour. These looks would give Gatsby a run for his money.

While the cotton-candy dresses certainly stand out, they are not mutually exclusive from their surroundings. “Charleston is a very romantic city with whimsical elements such as the beautiful pastel-hued Rainbow Row houses. “The dresses that we chose embody this romantic-whimsy feel and color palette,” Serrano described, placing the Millia London gowns perfectly into the Charleston scene. As the bunches of fabric coalesce into floral-like structures down the length of the gown, the magic of Charleston comes to life around this Gatsby-reminiscent look.

These luxury gowns are available for purchase through Millia London’s website, millialondon.com starting at $4,900. 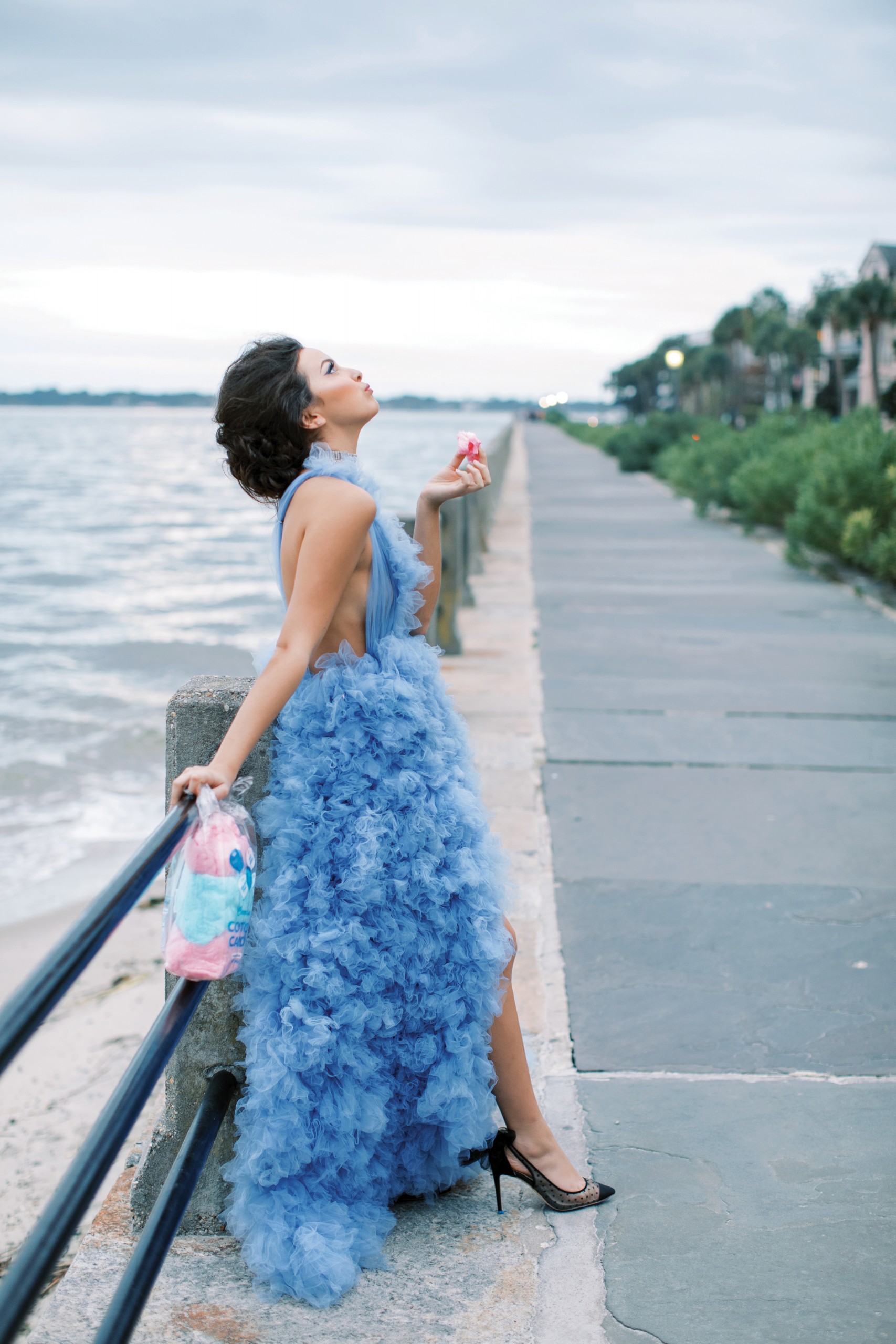 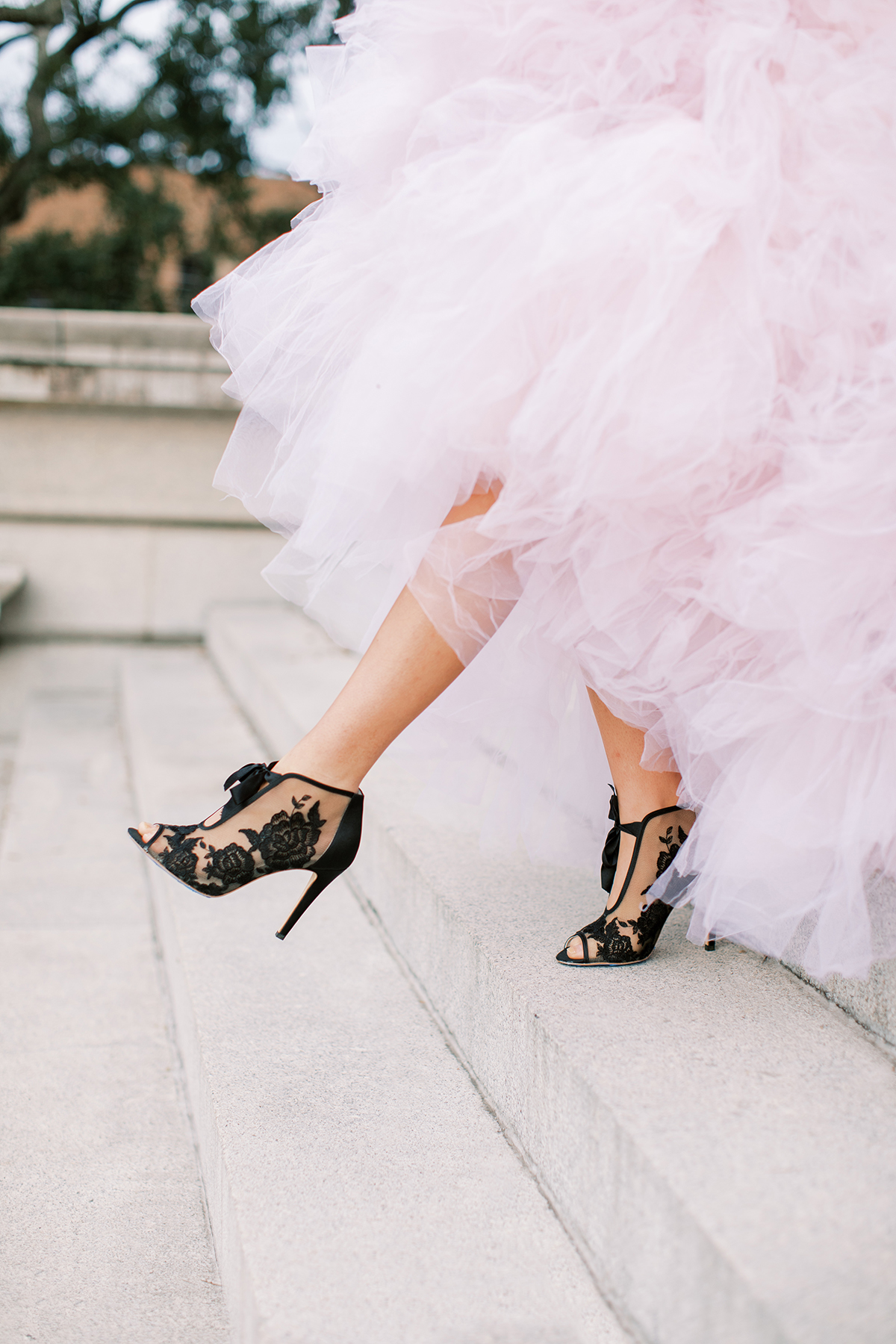 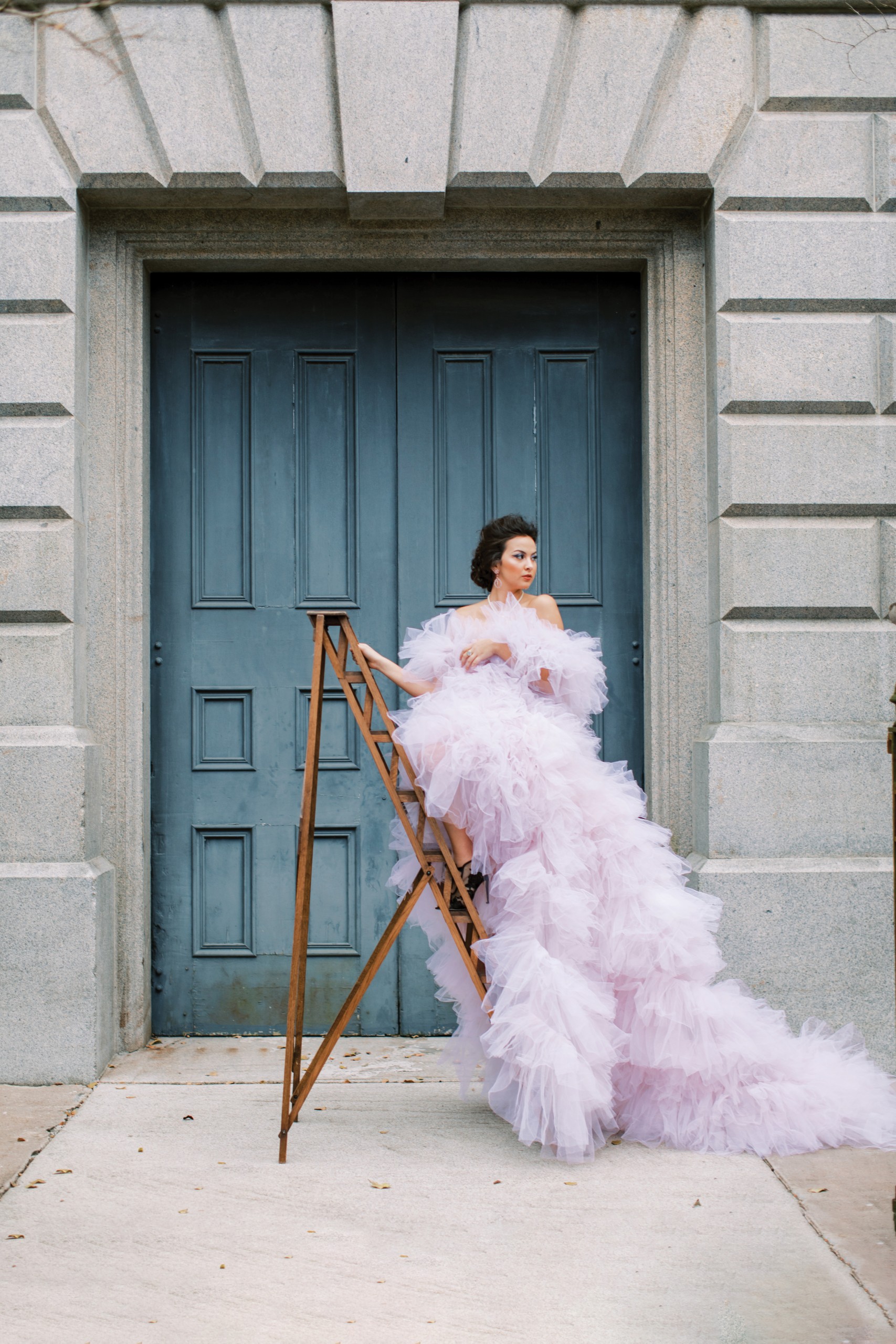 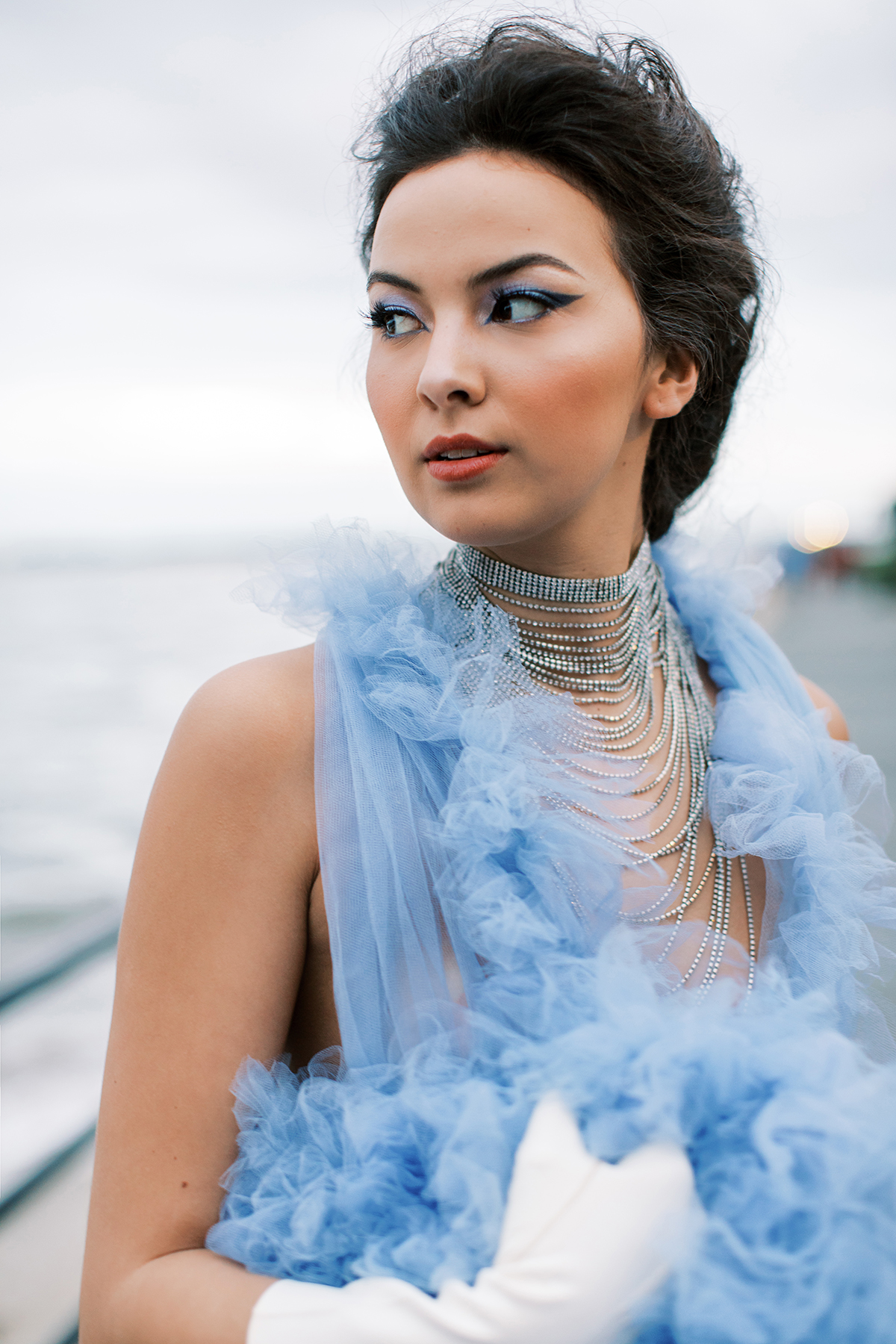 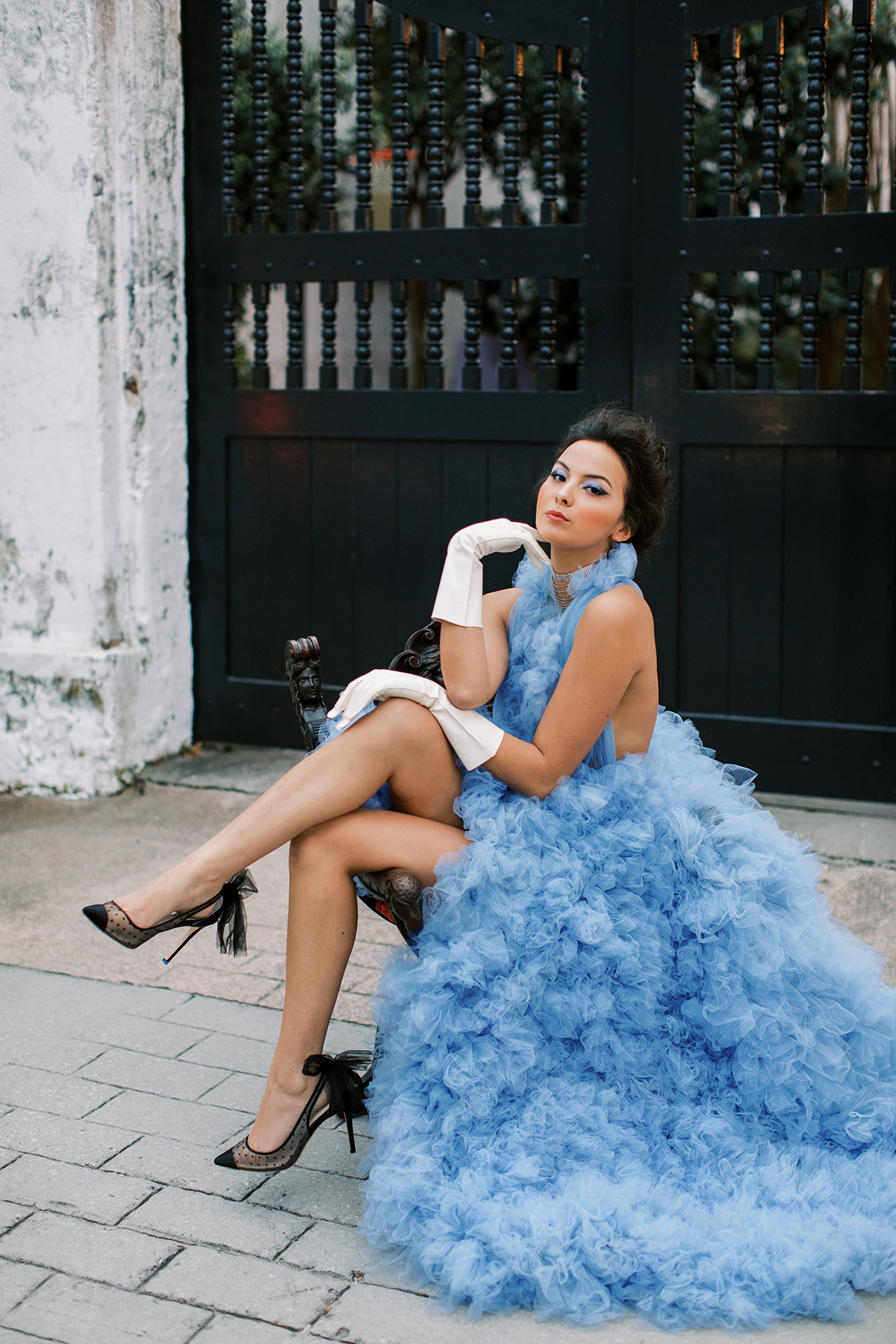 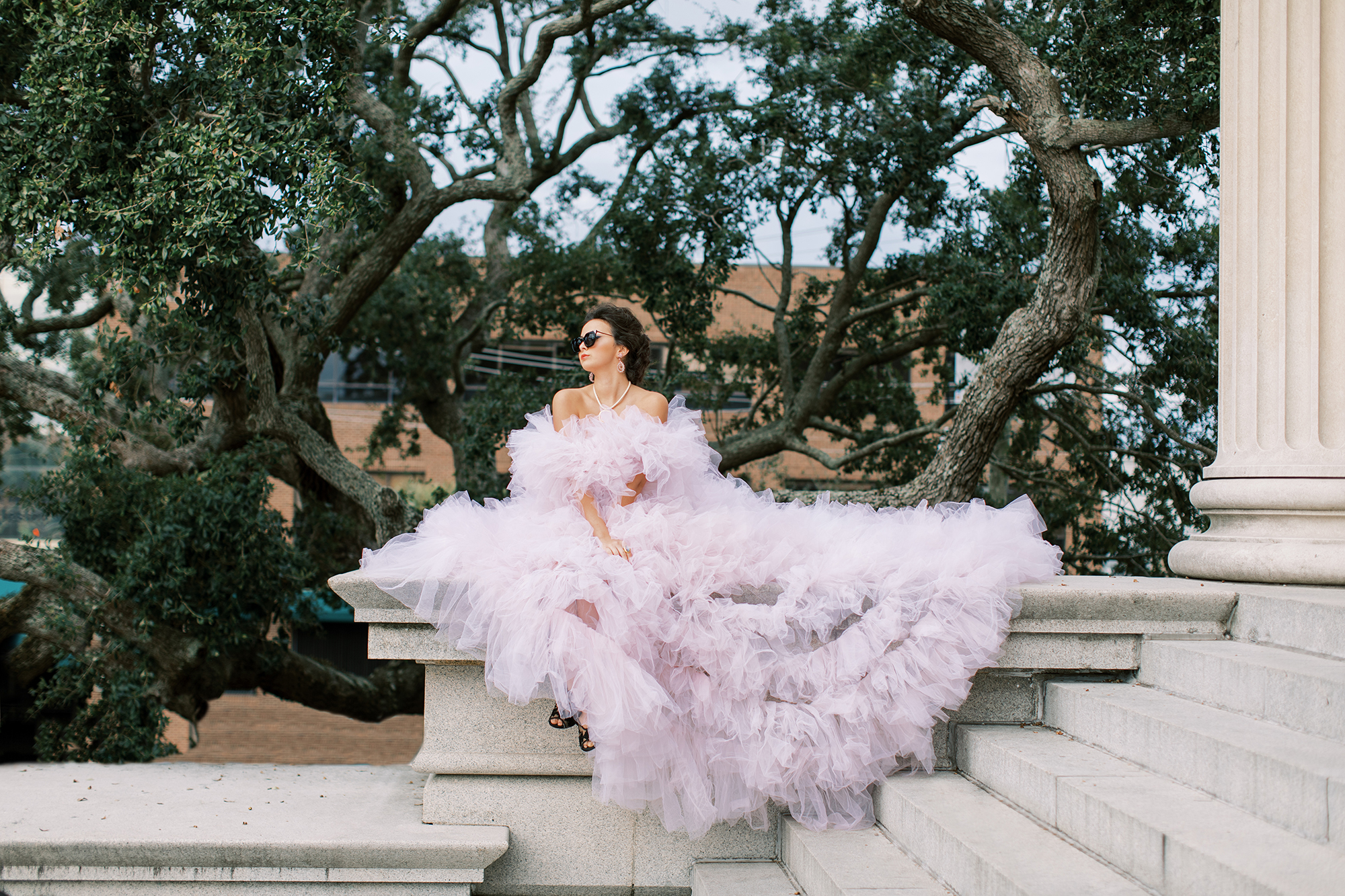 Out With the Old, In With the New

And in with the old, again. Model Paulina Robison brilliantly showcases Millia London’s masterpiece of ruffles on the steps of the U.S. Custom House. “We went everywhere from the beach to downtown. We wanted to show the diverse beauty of Charleston,” explained Serrano. “The Custom House is one of my favorite places to shoot because of its European architecture, wide open space and cascading stairs—perfect to drape a long tulle gown with a train.”

The U.S. Custom House’s construction was split by the eruption of the Civil War, with marked pre- and post-Civil War design decisions. For example, the grand marble walls and stately columns were finished before there were concerns about South Carolina’s secession, but the magnificent dome that had been included in the building’s original plan was cut after construction was stalled for the war and funds were halted. Instead, skylights were installed where the dome was to be. Where dramatic heels and luxurious tulle now dance over the marble staircase, the production pays homage to past innovations by carrying them into the present. 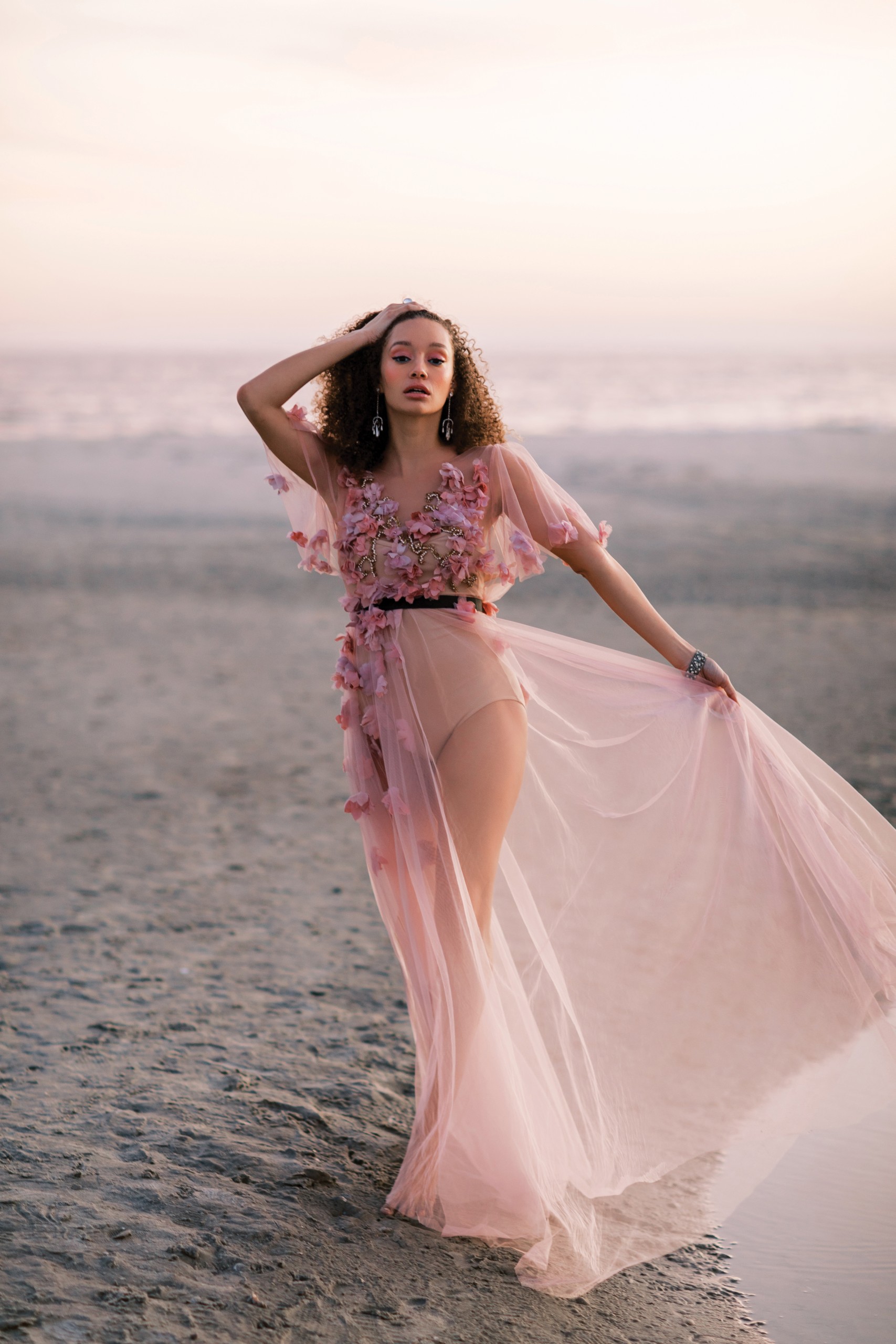 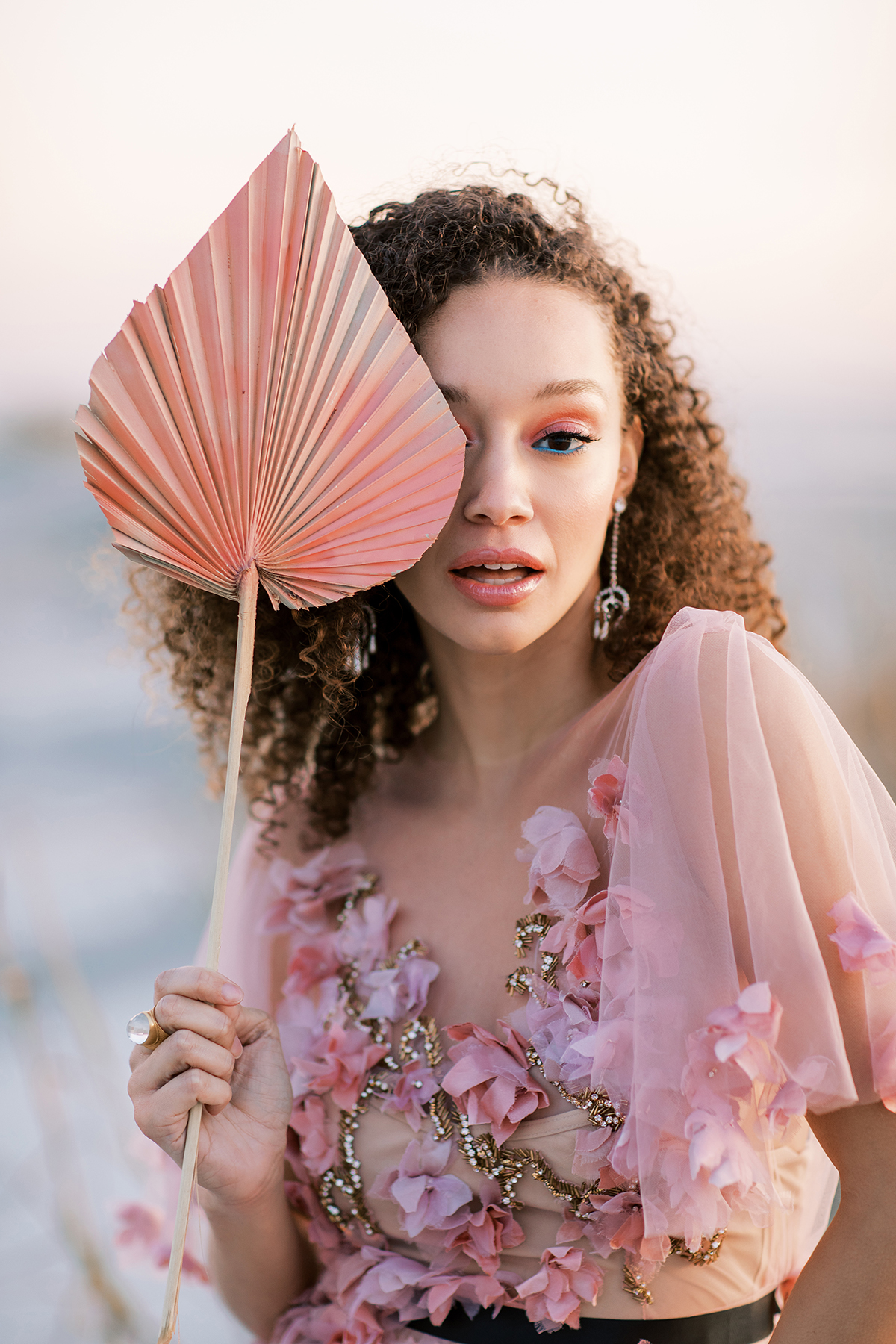 “We have been living in ‘casual culture’ since the pandemic started, and I wanted to inspire people with a jolt of high fashion with these incredible dresses from Millia London,” Andrea Serrano, stylist and producer, said. Model Krystina Martina brings this aquamarine frock to life alongside the incoming tide.

Sticky SPF and saltwater crystalizing on skin; mascara smudges and sweat beads; worn-in Levi’s and oversized T-shirts—traded for jewels, tulle and winged eyeliner. This is certainly a beachside fantasy, but these sands wear it well. 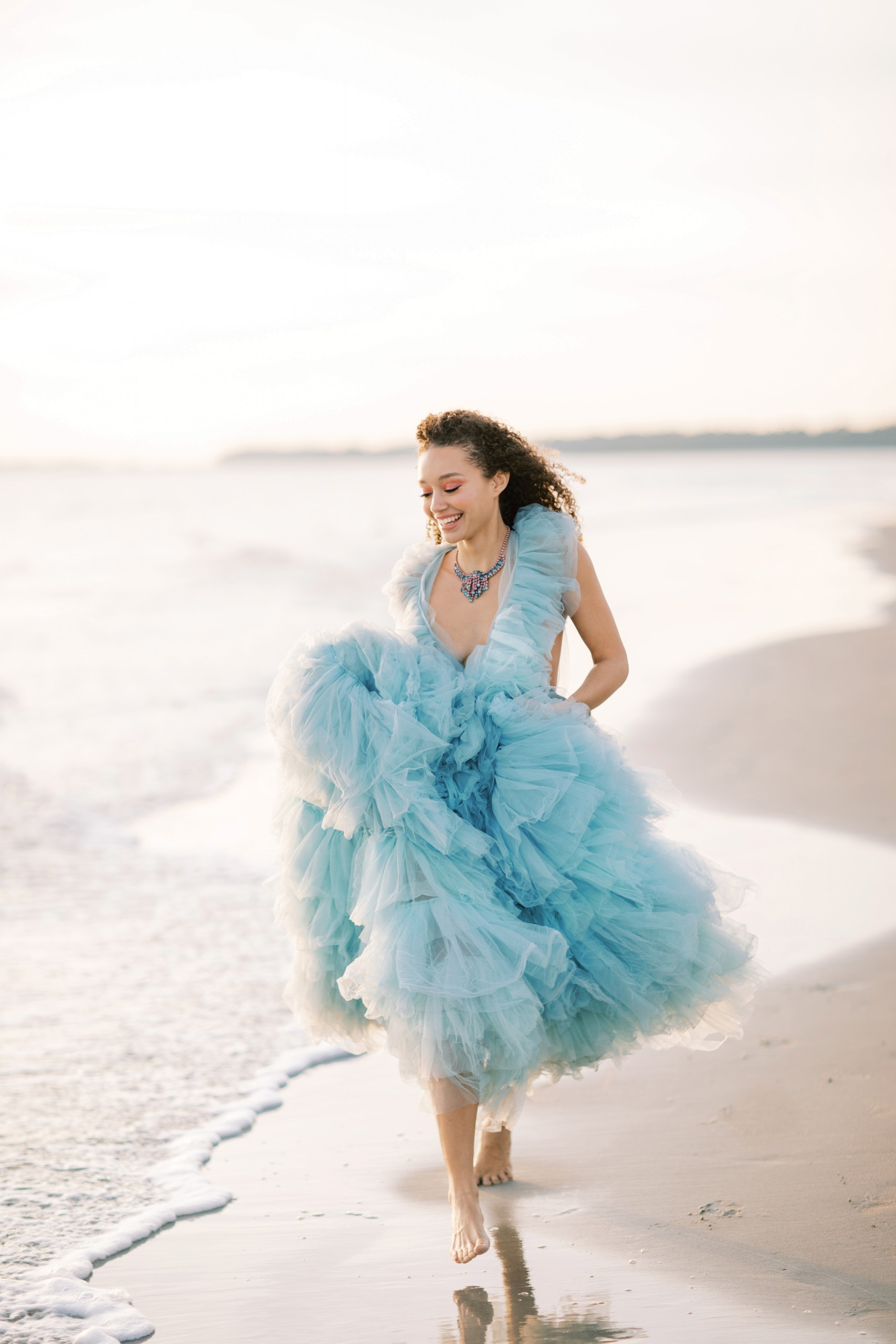 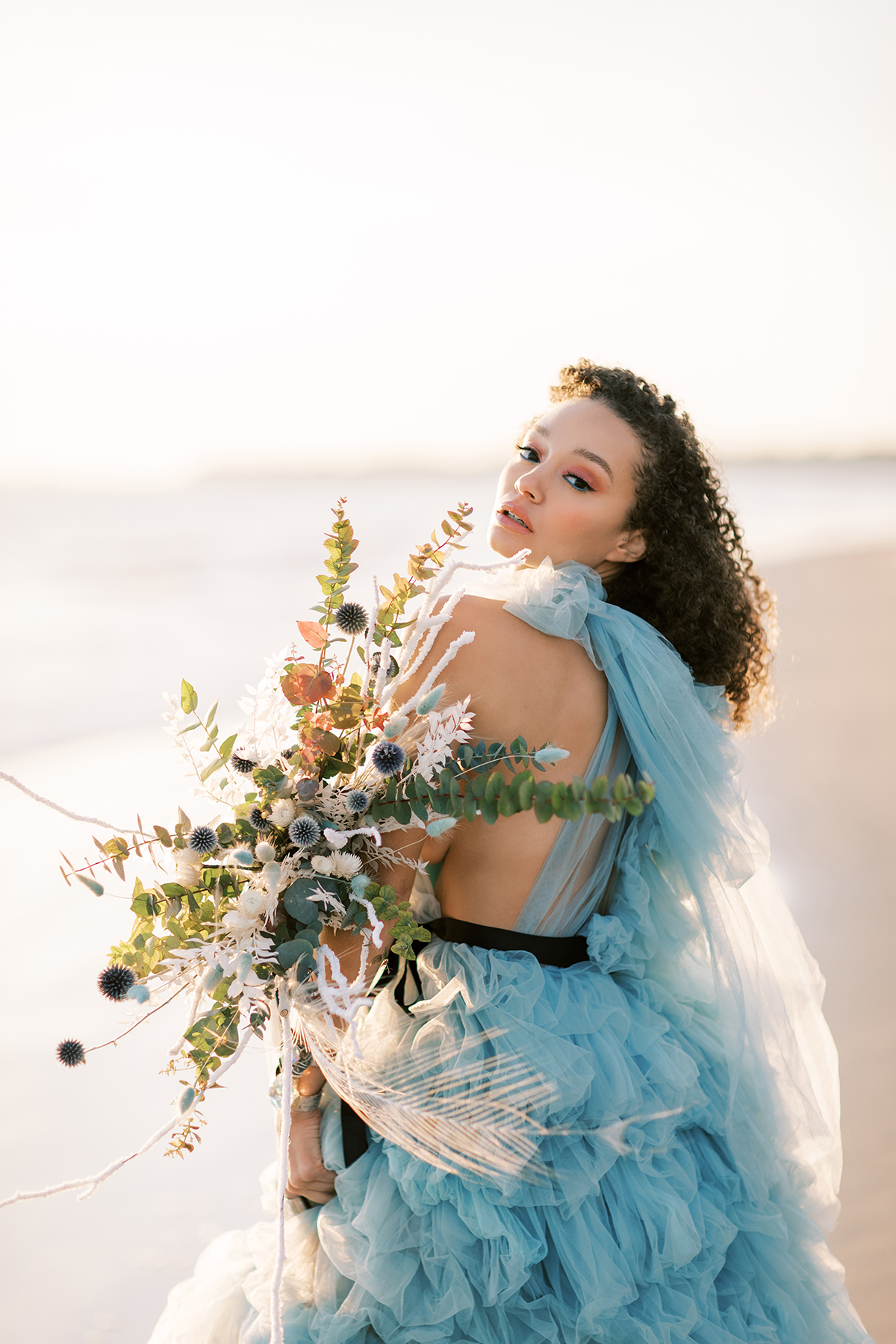 Life is too short to waste time blending in and hiding true colors. Handcrafted pieces are outshining fast fashion in the wake of a turbulent, trying year. Serrano described the Millia London gowns, “Each dress is handmade in their London studio using traditional couture techniques, hand dyed just for their customers. This means no mass production or excess stock.”

This ethereal gown is radiant in the glow of the Eden-esque coastal sunrise. The beaches of Charleston—Folly, Sullivan’s Island, Kiawah Island, Isle of Palms, Seabrook Island—offer a sublime escape from lockdowns and the lonely company of four confining walls. The floral dress reflects the dream-like landscape of the coastal South, capturing the infectious sea breeze on the flutter of a sleeve.