Forty years of pain, heartache and disappointment all evaporated over the course of four magical quarters this year. With South magazine’s cameras at the ready, the Georgia Bulldogs roared into the history books with their first National Championship victory since 1980. 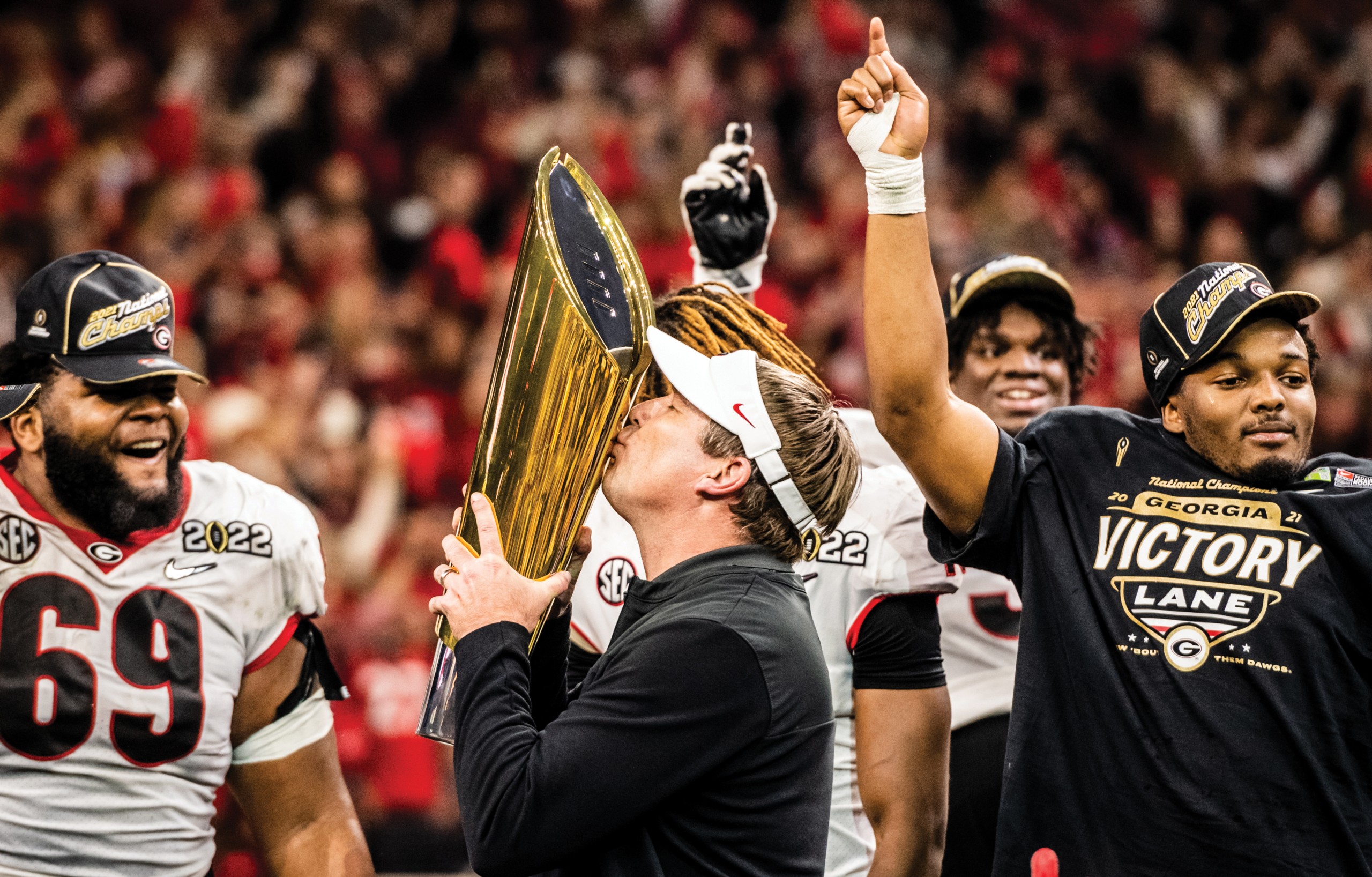 Holding the National Championship trophy heralded an even sweeter victory for Head Coach Kirby Smart, his first win as a head coach against his former boss, Alabama’s Nick Saban, and Georgia’s first title win since 1980. Photography by Cassie Wright

Forty years of pain, heartache and disappointment all evaporated over the course of four magical quarters this year. With South magazine’s cameras at the ready, the Georgia Bulldogs roared into the history books with their first National Championship victory since 1980.

There is no sweeter victory than one which comes at the end of decades of anticipation. When The University of Georgia last claimed a national championship, the football landscape was a very different place. Back then, the Big 12 was only the Big Eight. The Big Ten actually had ten teams. And the SEC was, well, pretty much the same.

Even then, Alabama was the team to beat. And Georgia was just the team of destiny to do it. 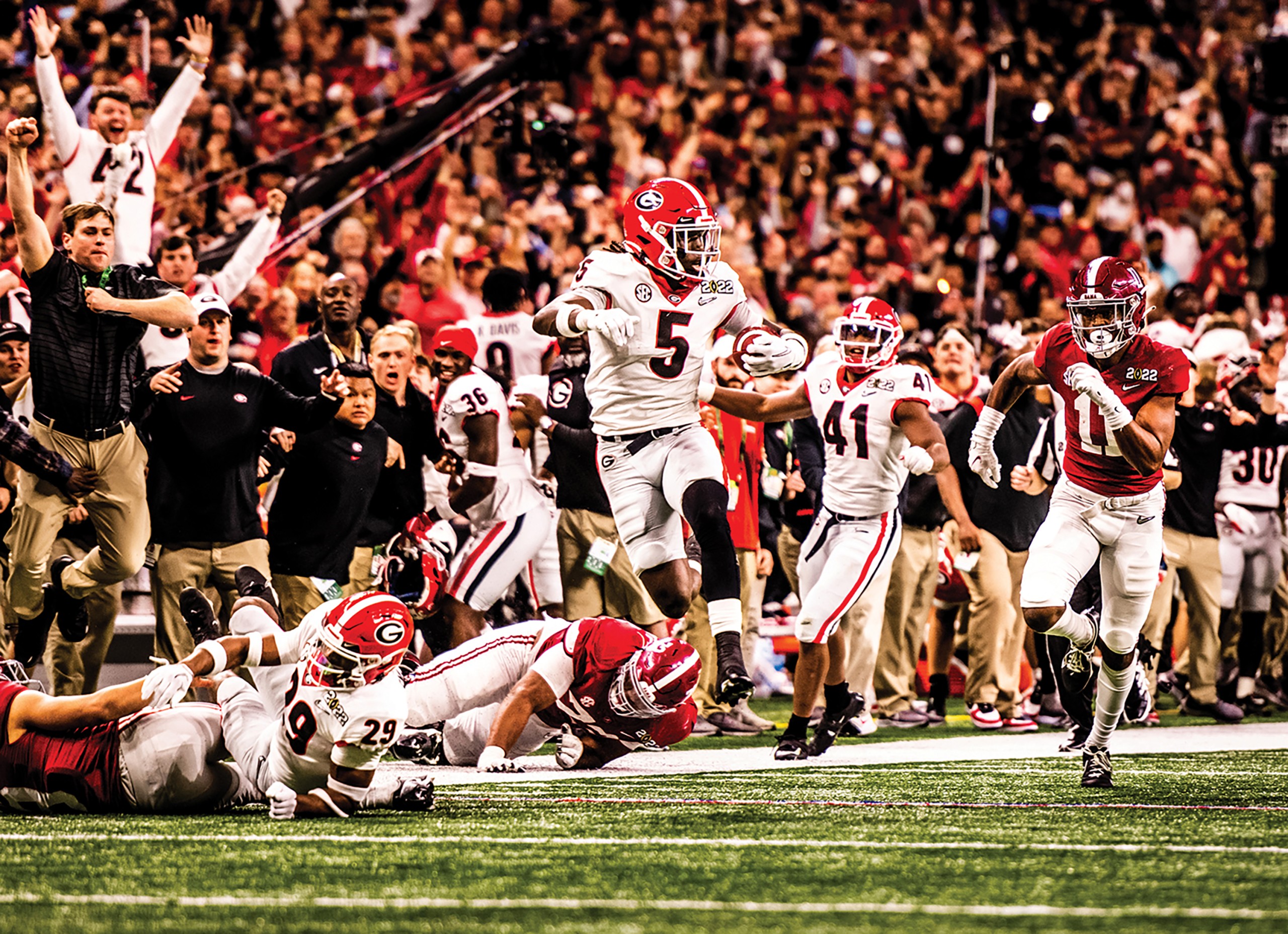 RINGO’S PICK 6 With less than a minute to go in the national title game, Kelee Ringo sealed the deal with “Ringo’s Pick 6,” the freshman’s 79-yard interception return for a touchdown. But perhaps an even sweeter victory was the announcement in early March from Ringo’s biggest fan, Dawg and mother, that her battle with breast cancer has also been won and she is cancer free.

Under coach Vince Dooley, and with a hotshot freshman running back named Hershel Walker tearing up the field, they were able to lay claim to a national title in 1980 and put some mud in the Crimson Tide’s eye. They ended the year as champions, not knowing the turmoil that lay ahead.

Year after year, The Bulldogs would start the year out at the pinnacle of the polls. Through the rise and fall of the BCS era, and the dawn of the College Football Playoff era, they would begin the season red hot on the strength of their recruiting before falling in the stretch. 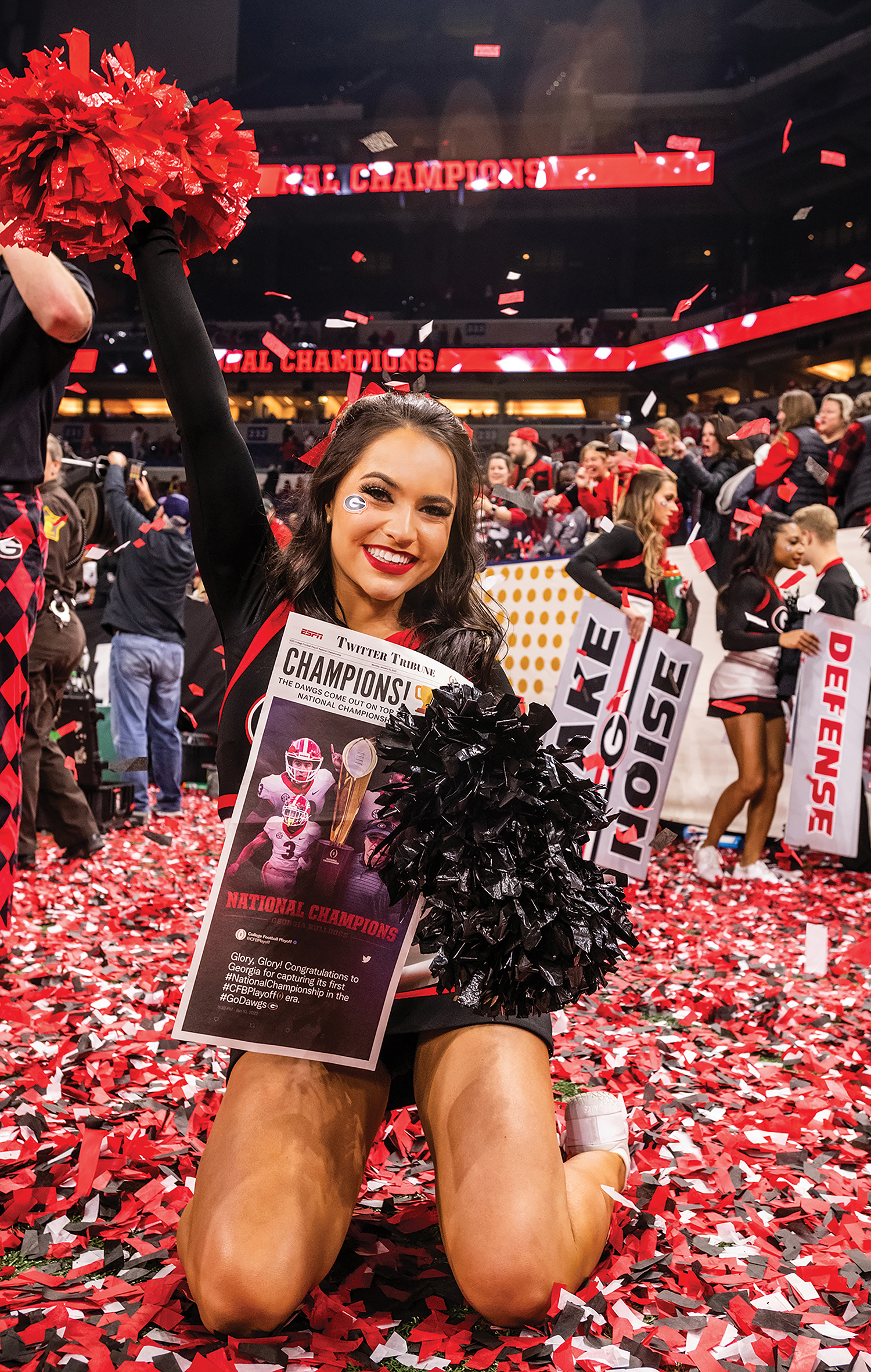 Sports reporter, UGA senior and cheerleader, Southern Britt has sports in her blood, having been raised by a head football coach and an all-star cheerleading gym owner.

And then came 2017, when the Bulldogs beat Oklahoma in the Rose Bowl, earning a spot in the national title game. Their opponent? The unstoppable juggernaut that is, was, and always seems to be Alabama. The Tide got the better of the dogs that year, but that just made them hungrier for a title.

And as anyone will tell you, a hungry dog is a dangerous dog. 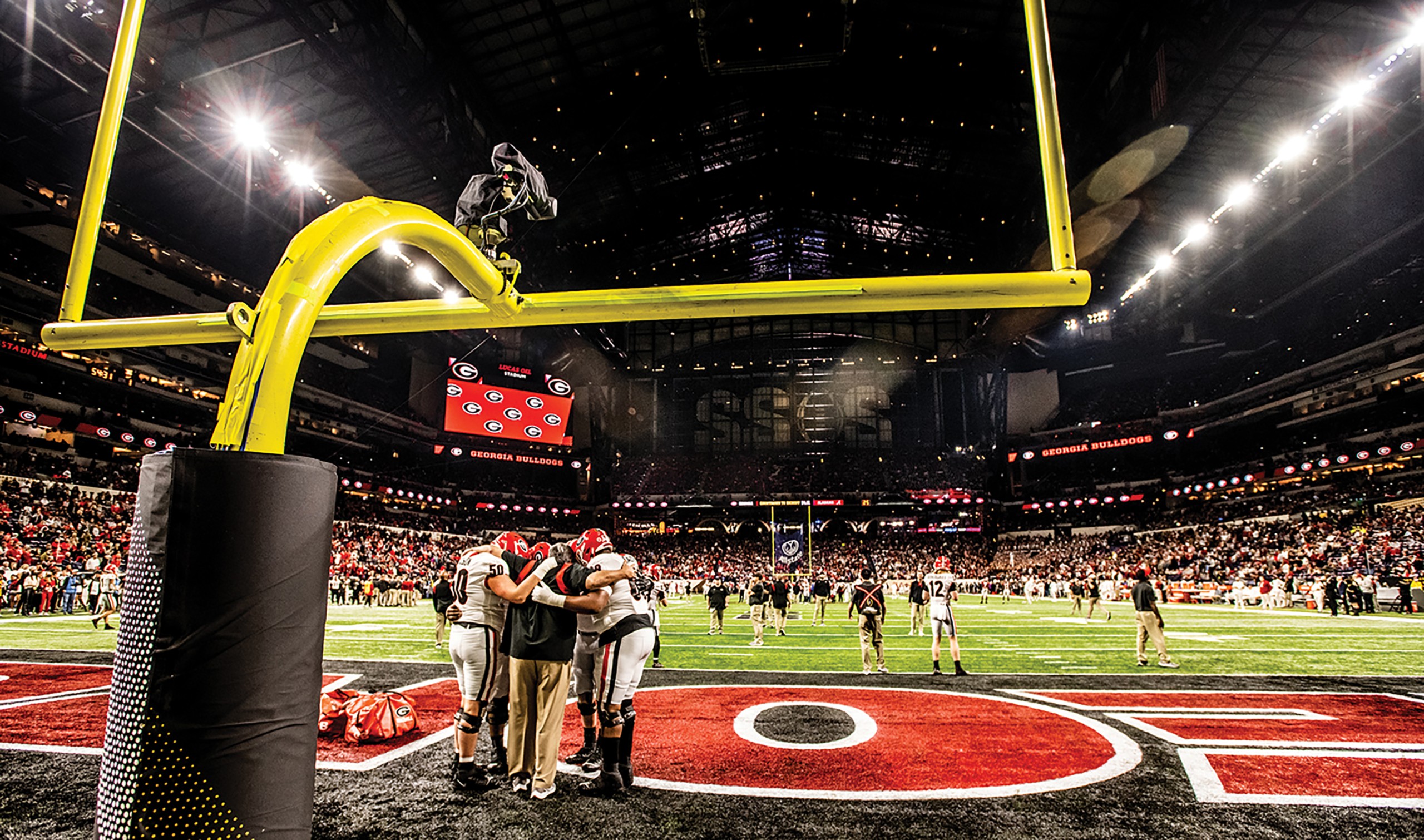 One of the most important pre-game huddles in UGA history.

They would prove that this past year, coming out as a dominant force in college football with a defensive clinic against Clemson before steamrolling their way through the regular season, outscoring opponents 488-83. 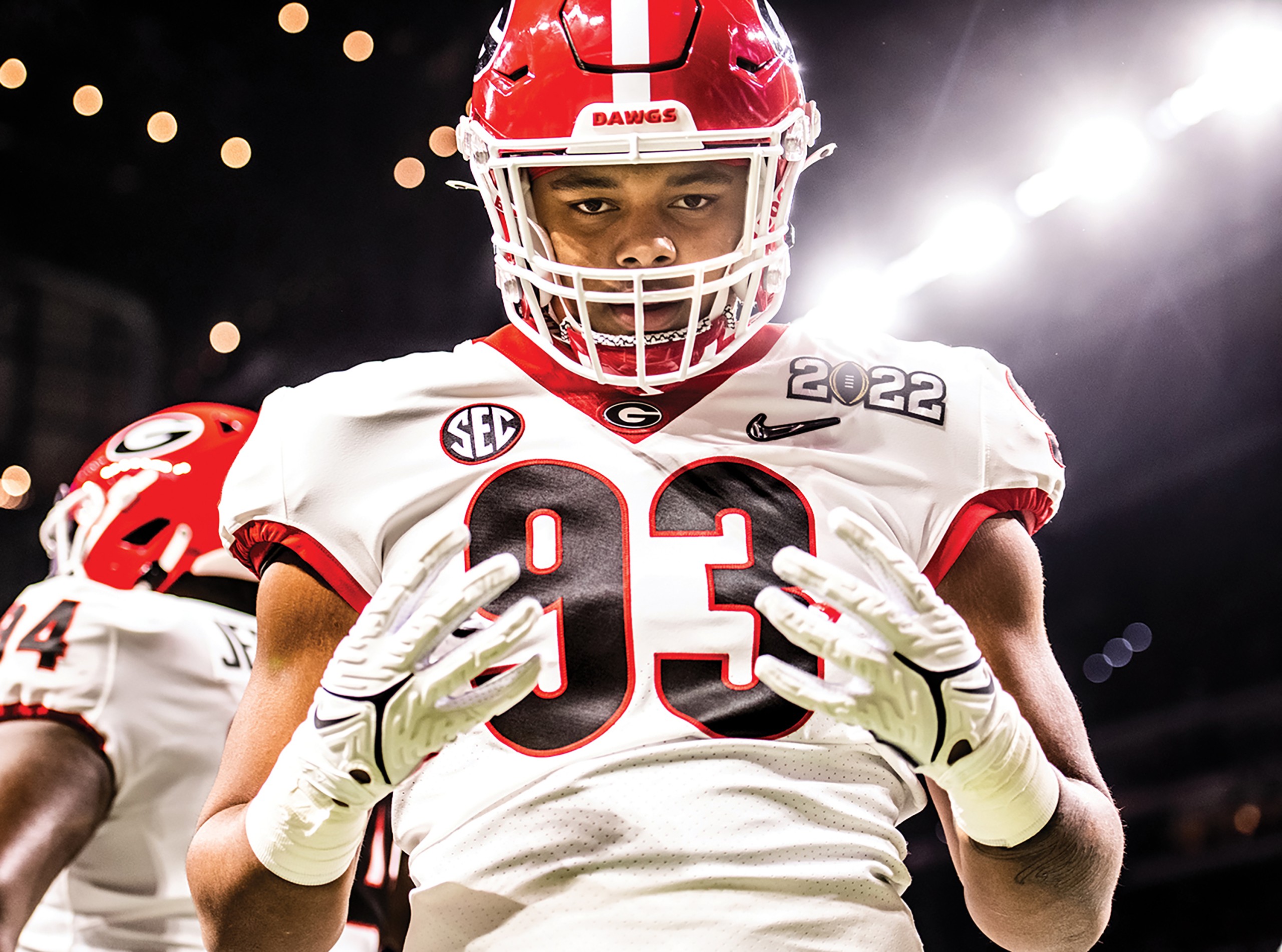 At quarterback for much of that winning streak was the kid they called “The Mailman,” Stetson Bennett. His unlikely rise from walk-on to backup to star mirrored the unstoppable destiny of the Georgia Bulldogs as they blasted their way to the top of the rankings. And this time, they stayed there.

We don’t need to go into detail about the SEC championship game. Suffice it to say, if The Bulldogs were seeing red every time Alabama took the field, that fateful night tempered their resolve to finally put the Tide in its place. 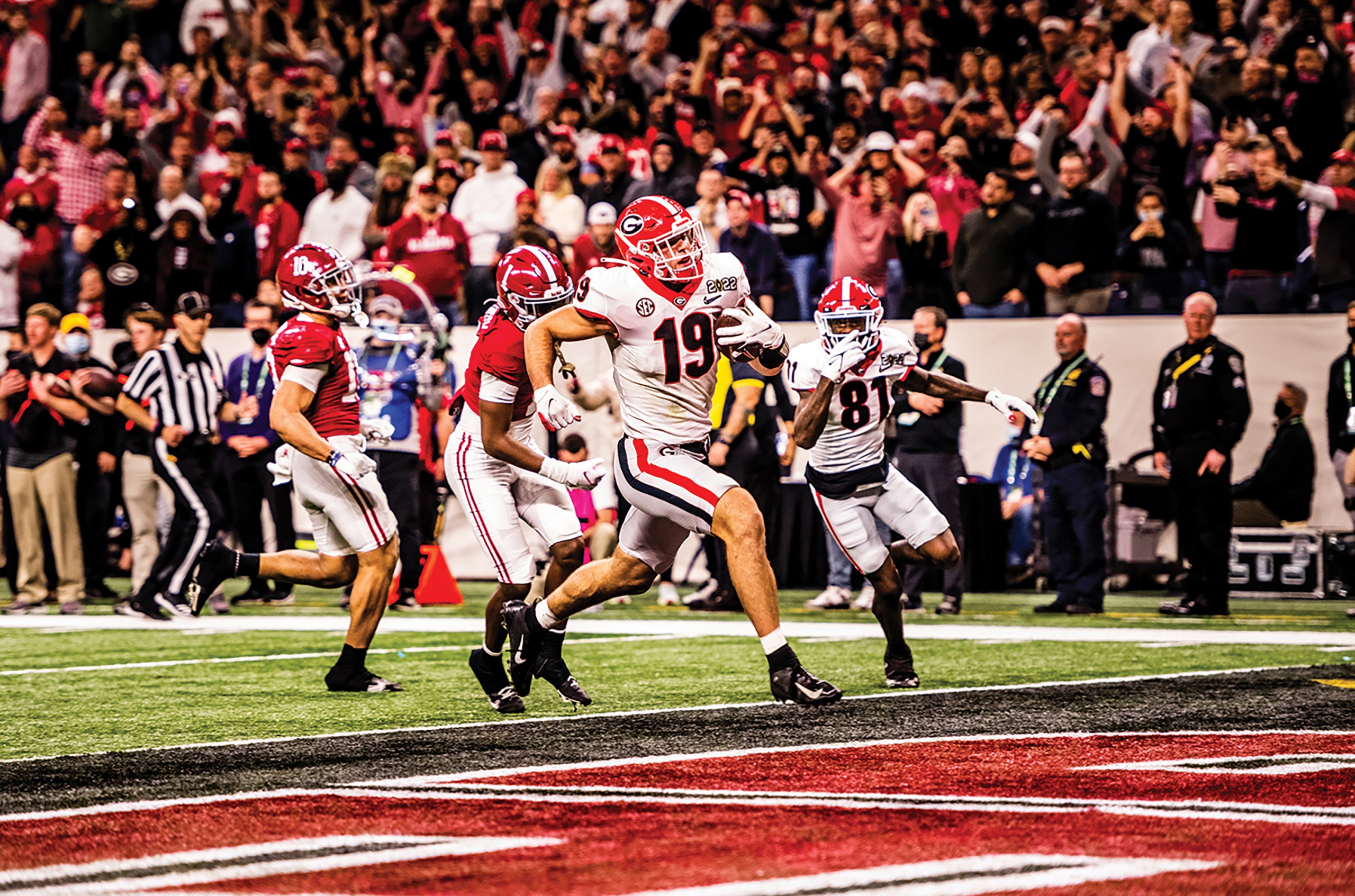 The second-to-last biggest play of the game courtesy of freshman Brock Bowers’ 15-yard touchdown, which launched the Bulldogs to a 26-18 advantage.

Which brings us to the National Championship game, and the feeling from the first snap that things were different this time around. This was not the Georgia team that had fallen to Alabama in the 2017 national title game. These were not the same players who had watched Nick Saban lift their SEC trophy. 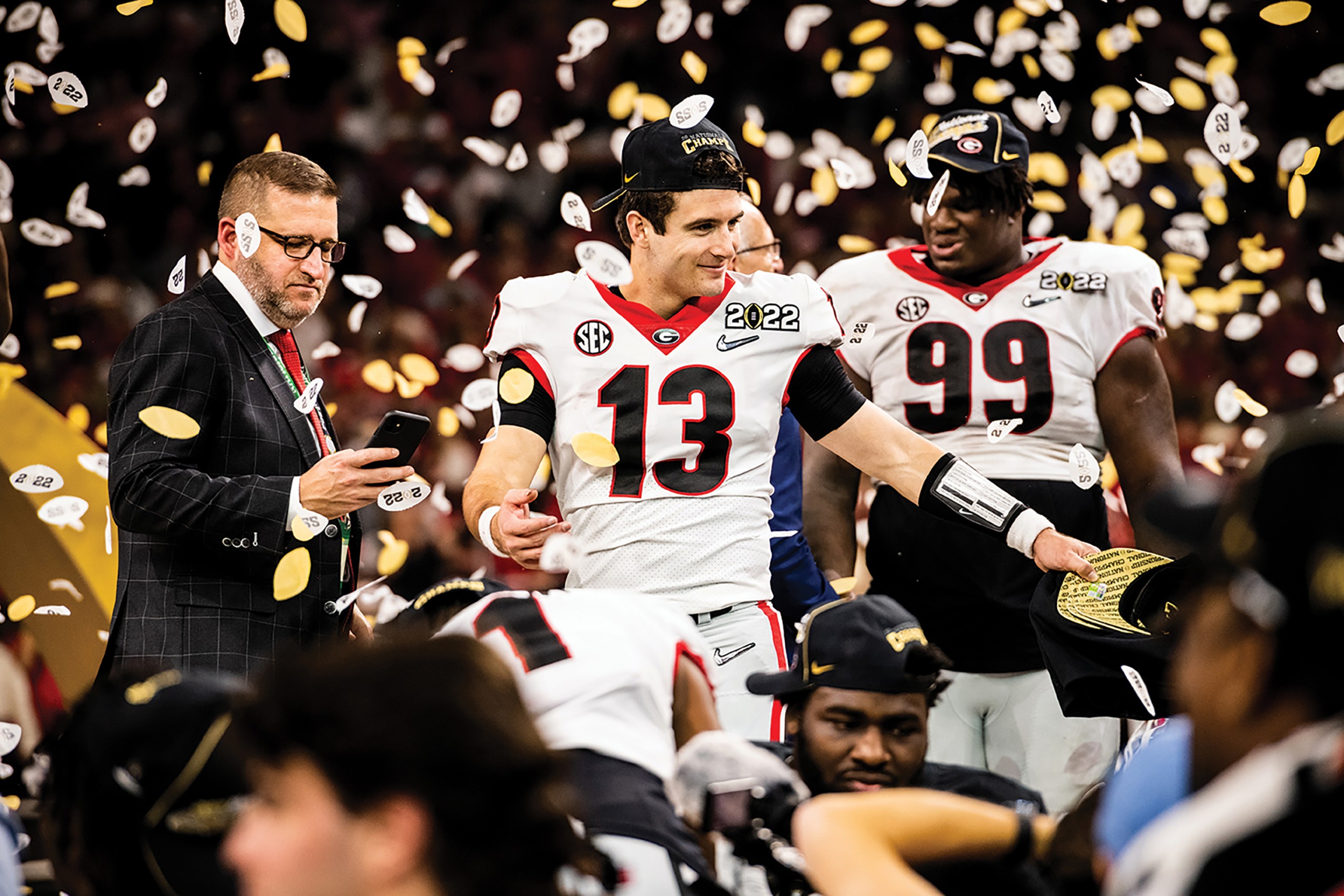 These were warriors. And they came to the frigid tundra of Indianapolis to stand beneath the lights of Lucas Oil Stadium and show the world what an angry group of dawgs can do.

It wasn’t always pretty, but then battle never is. Given the defensive prowess of both teams, it was only natural that the kickers had their moment in the spotlight, with the first touchdown not coming until the second half. 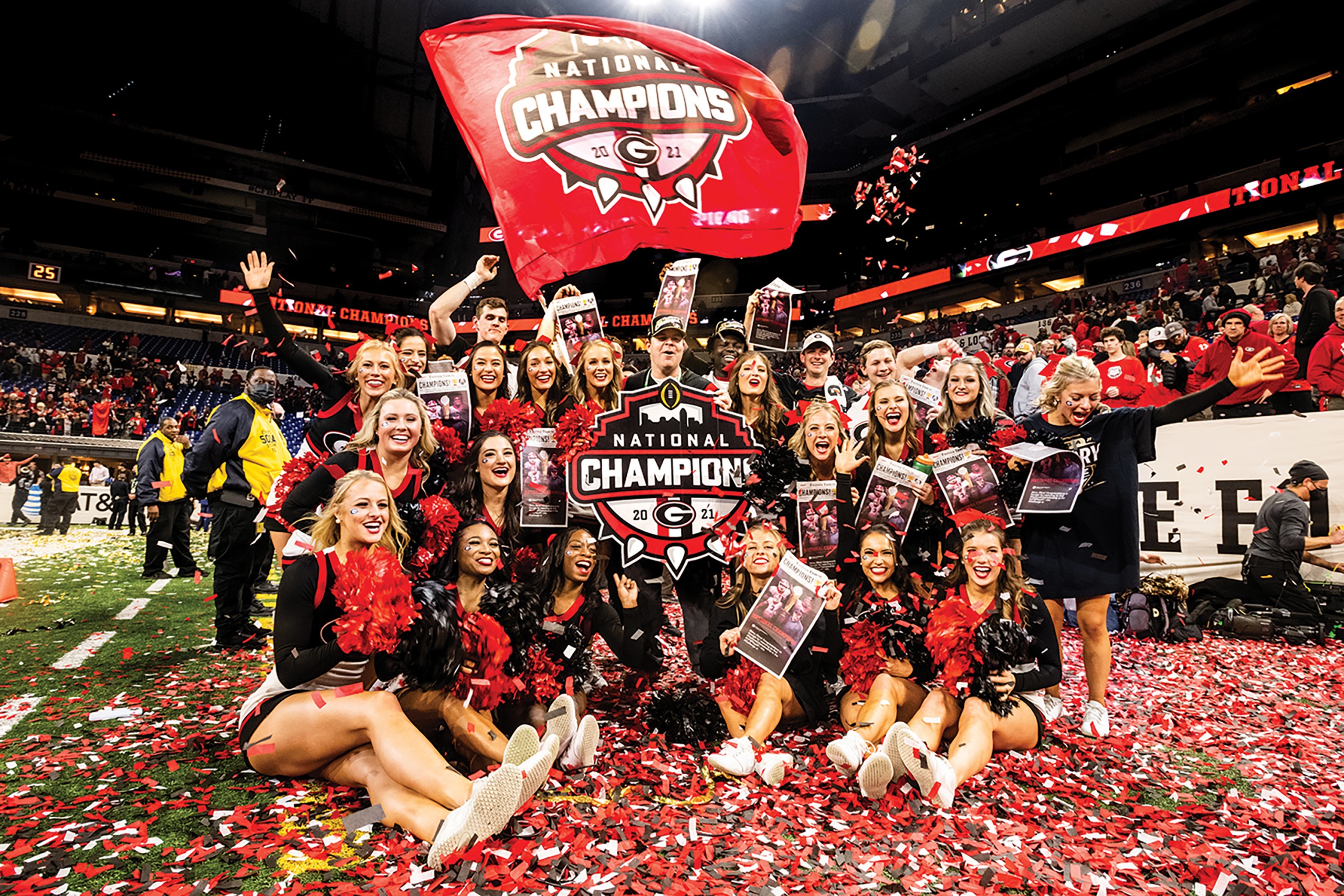 Victory celebrations for all, including Spirit Coordinator and Head Coach, Ben O’Brien and the UGA Spirit squad.

For a contest that has become something of a snooze fest over the last few years, this one felt different. Even fans who didn’t have a dog in this fight felt it. You can bet Georgia felt it. And when it was all said and done, they made damn sure Alabama felt it, too. Putting up 20 points in the fourth quarter, the Georgia Bulldogs put a decisive finish on a hard-fought victory and cemented their place in Georgia history. 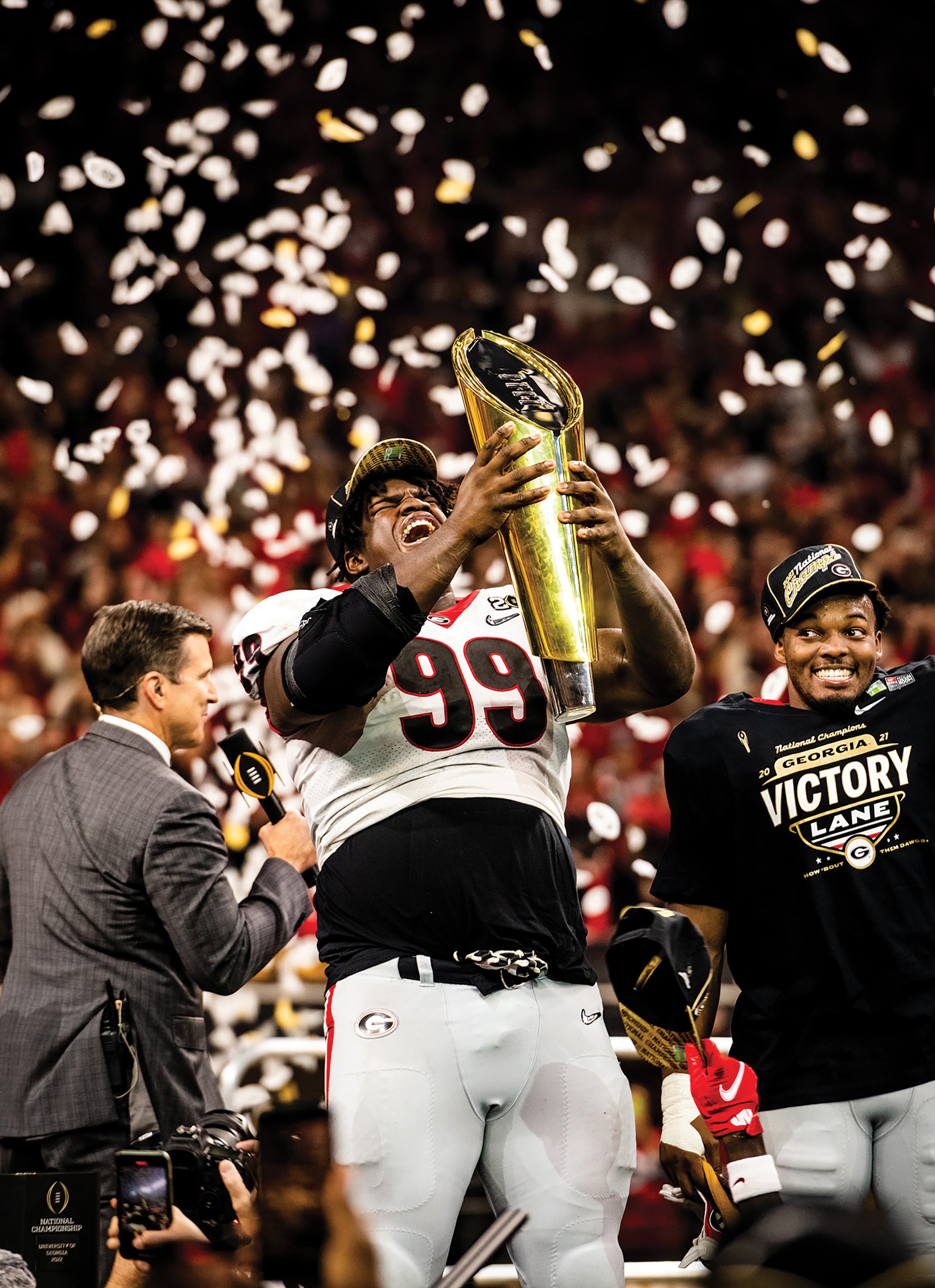 As coach Kirby Smart said in a post-game interview, “The men on this team will be remembered for a long time.”

Hopefully, it won’t be as long before the next group of Dawgs can say the same. 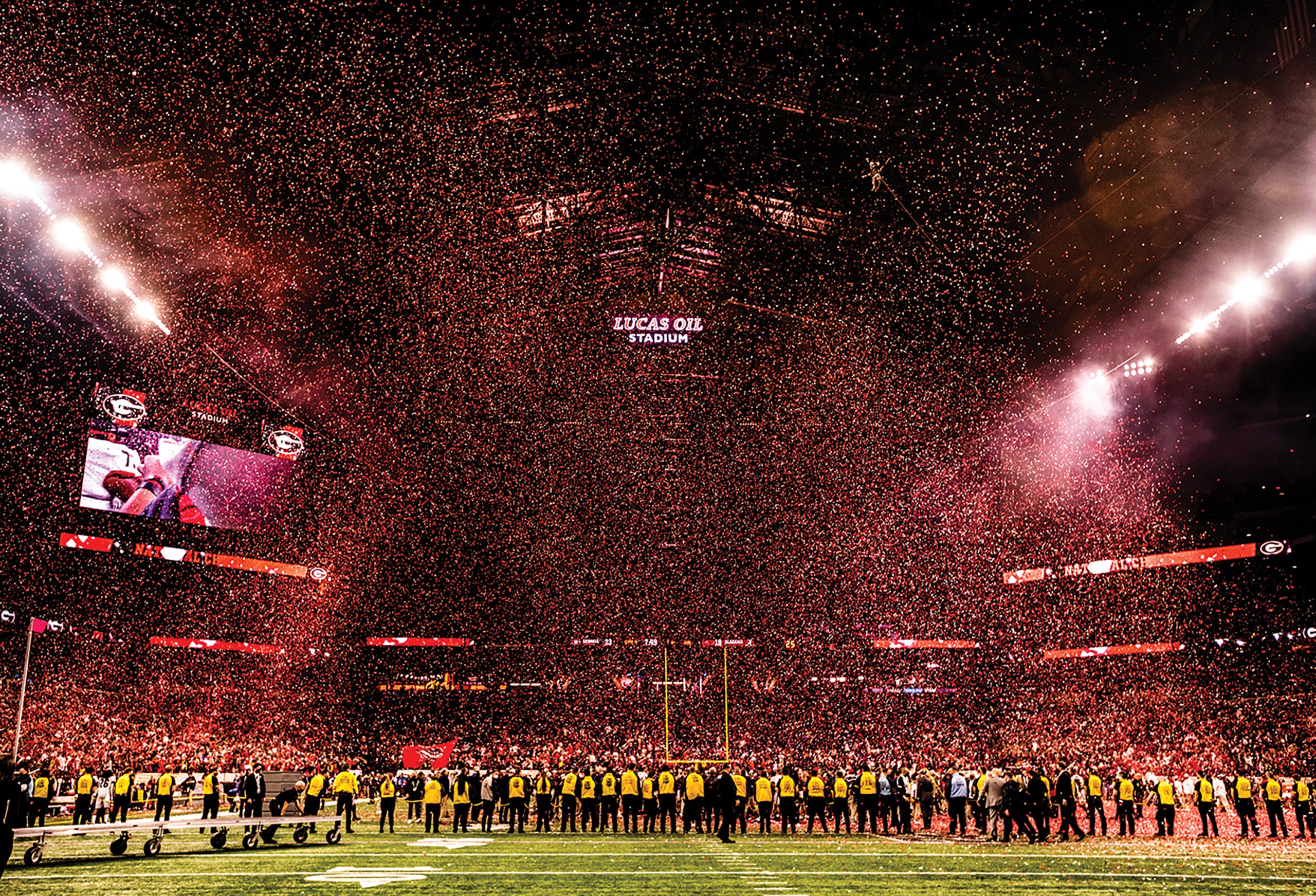 X’s and O’s It’s official. The clock at zero. The Bulldog’s first national title since 1980 with a 33-18 win over the Crimson Tide. It was also the point in time where the de facto UGA homefield stadium exploded. Photographer Cassie Wright — who was incidentally born 45 minutes from the Lucas Oil Stadium — joined the explosion of confetti and sea of red at the biggest celebration she has witnessed since she started photographing the team in 2011.

“The moment started when Kelee Ringo had the play. People were screaming, men were crying. It was an unbelievable release. We’ve been holding our breath for decades waiting for the moment. It was surreal and so, so big. It was destiny.” –  Photographer Cassie Wright 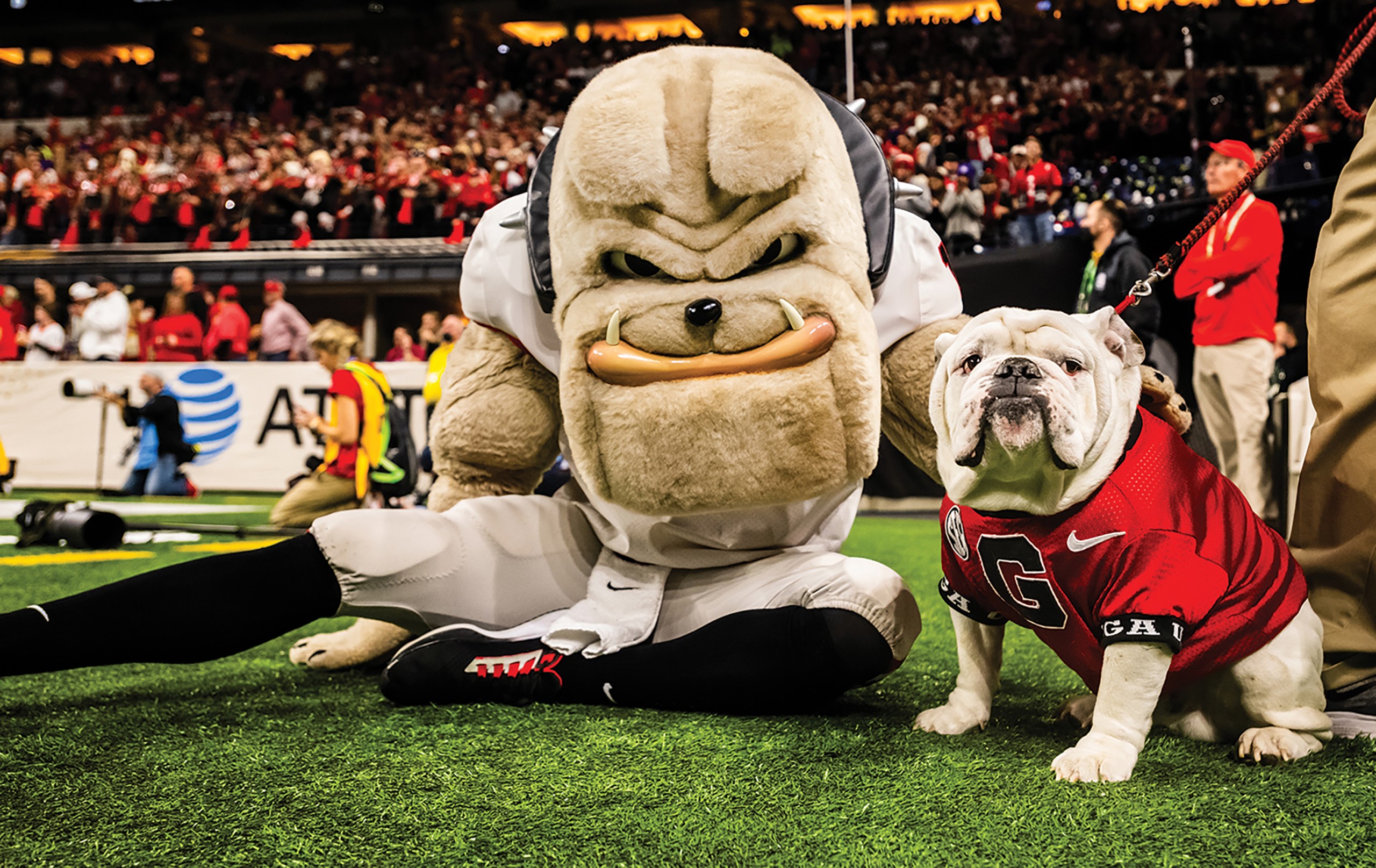 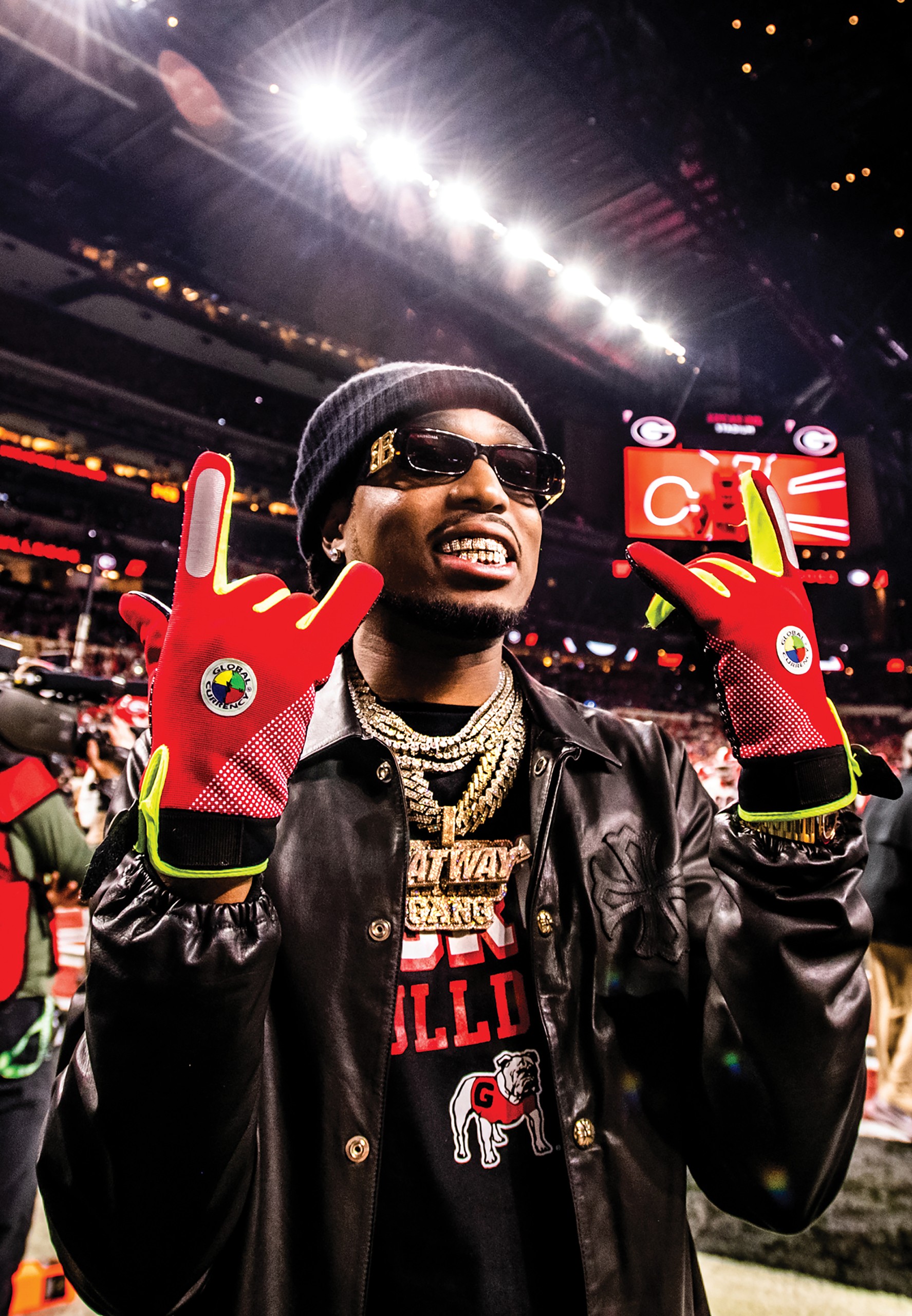