Year of the Dogs

For more than 20 years, Vincent J. Musi scoured the globe for that perfect 1/60th of a second where his camera reveals the beauty of nature. His affinity for animals, and his dogged determination to capture them at their most graceful, made him a favorite for National Geographic. Today, he captures the beauty of animals in a different way, with his special “The Underdogs” project which sees him training his lens on shelter dogs, revealing the beauty beneath their imperfections and quirks.

Not only does Vincent J. Musi have 336,000 Instagram fans he keeps entertained, he also has 12 National Geographic Covers and a book to add to his curriculum vitae. But sensing he was missing the best years of his son’s life by always traveling for work, Musi settled in Charleston where he and wife Callie Shell (who handles the business end of the operation) opened The Unleashed Studio. 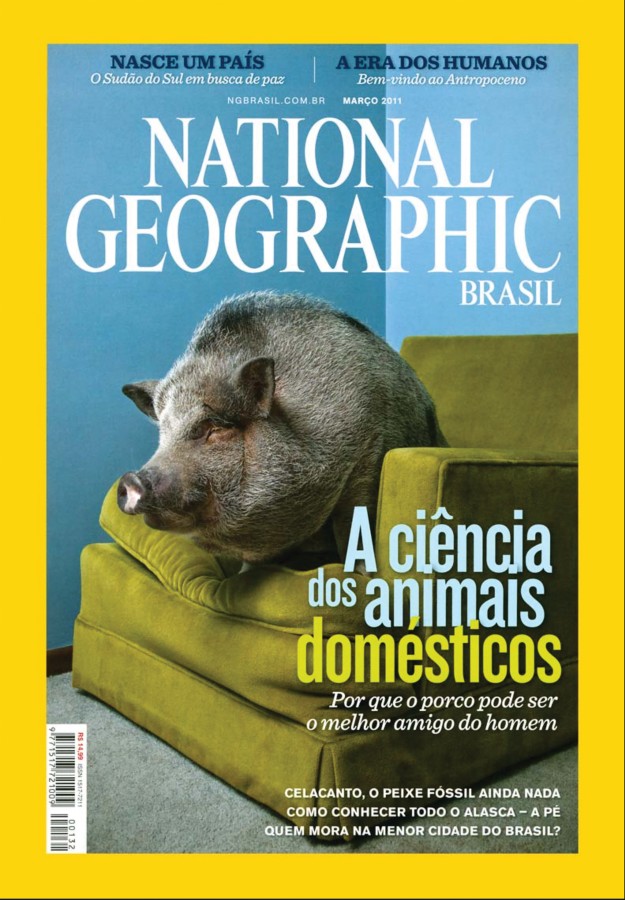 South tracked down the famous photographer to ask just how hard it is to photograph everything from a honeybee to an elephant—in the studio.

South Magazine: How exactly do you go about photographing a bee, or an elephant for that matter?

Vincent J. Musi: Carefully in both cases. The challenge was to release the bee unharmed after we photographed it, which we did. We put both animals on a white seamless background to make their portrait for a story about animal cognition.

SM: How did you begin your photography career, and do you remember the first photo you ever took?

V.J.M: I went to college for journalism and worked for daily newspapers on and off for around 12 years. Before I started working for magazines, I was a sports photographer. I don’t remember the first photo I ever took, but I probably didn’t have film in the camera. I ran around with an empty camera because we couldn’t afford the film and developing back then. Photography was more about looking through that little window for many years. Maybe it still is for me.

SM: What is the best piece of advice you can give other photographers?

V.J.M: My best advice is to not let the business of photography take away your love for photography.

SM: What is your favorite photograph and what was the hardest photograph for you to get?

V.J.M: I honestly don’t have a favorite photograph as they are all like my children and I can’t pick one over the other. Once I sang to a snow leopard to make her portrait. I’m not much of a singer so that might have been harder on her. My colleagues are the kind of folks who spend the winter in a tent eating peanut butter for three months to photograph a bear. I’m not one of those folks. The worst thing that happens to us is we might run out of Lacroix’s or Nespresso capsules.

SM: Working for National Geographic, you got to travel the world and see things most people can’t – what are some of your fondest memories of that time?

V.J.M: As a passenger, I’ve auto rotated in a helicopter twice and landed safely. I’m very fond of the latter. The rest of it is being allowed to experience how others live their everyday lives.

SM: What gear are you most often using when working?

V.J.M: I used to travel solo with two Leicas and a backpack full of film. Now I kind of look like an HBO production with assistants and multiple cases of equipment that contain two of everything in case one thing breaks. In the studio, I work with my wife Callie. Actually, she does all the work because I’m hopeless. She’s also a great photographer and feels sorry for me.

SM: What prompted you to write a book?

V.J.M: I left Nat Geo because I felt I was missing too much of my son’s life. I started photographing dogs as just something fun to do and it sort of spiraled from there.

SM: What was the process like writing your book, “The Year of the Dogs?”

SM: Is there one that got away? A photo opportunity you missed or didn’t get?

V.J.M: There’s pressure for me to photograph cats right now but I’m resistant. They might be the ones who get away.  • 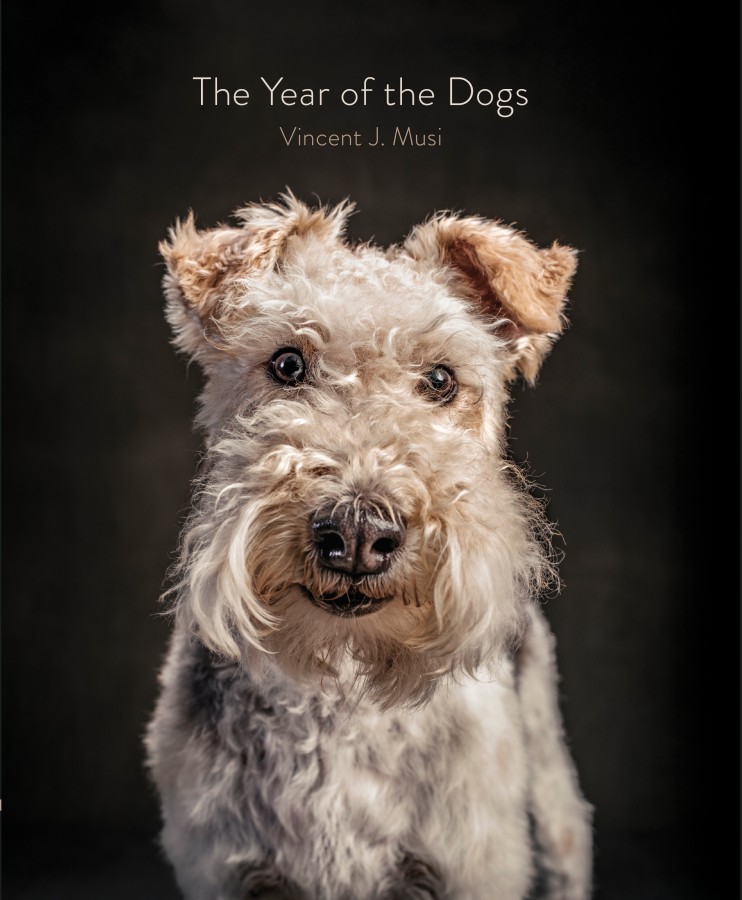 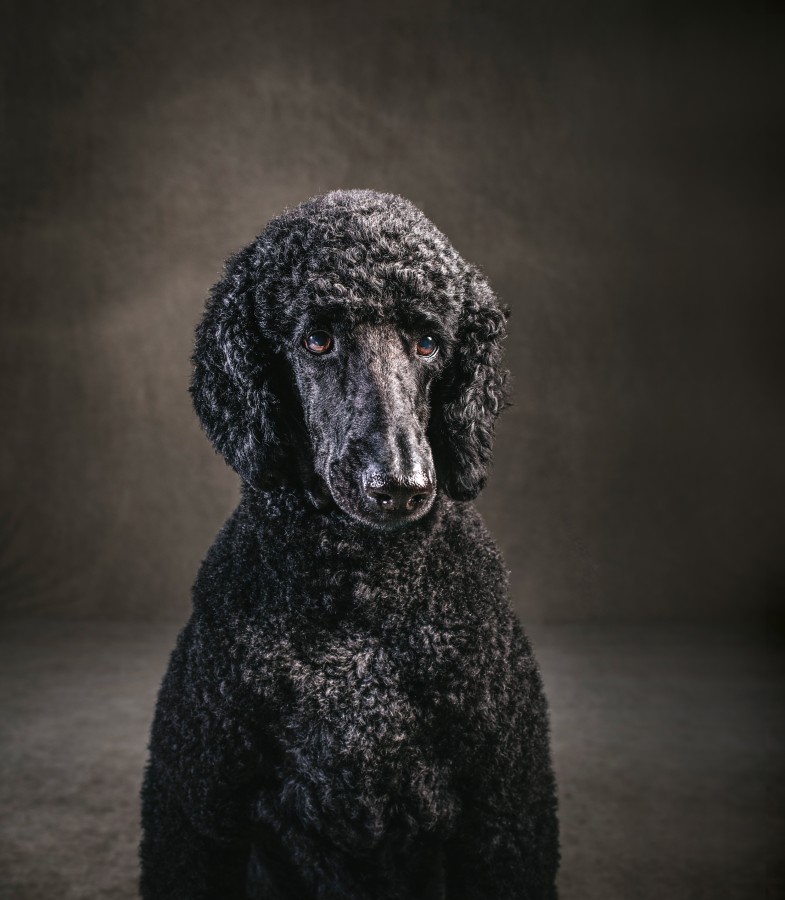 Musi often posts stories to go along with his photographs and many of them are just as amazing as the images.

Many people envision our work in the studio as a high-energy, creative experience with me shouting “beautiful baby, beautiful” and the dogs responding with pose after pose like models before the lens of the famous fashion photographer and international spy, Austin Powers.

The reality is, I’m somewhat unable to speak when in the process of making photographs. It’s a genetic flaw or some right brain/left brain quirk realized for the first time when I was rejected from my childhood garage band for not being able to sing and play drums at the same time. Damn you Phil Collins.

When we work, this leaves me with a limited menu of grunting noises and the occasional guttural outburst, which I still find helpful in getting an animals attention. It also passes for a kind of barbaric shorthand between Callie and I, until she tires of it and gets mad at me, which she finds helpful in getting my attention.

Zorro is a 12 year-old Standard Poodle, too damn smart to get in the middle of our bickering. He tried to stay neutral but always sided with Callie. This is often the case with the nice lady holding food and I am still learning to live with rejection.

This is more frustrating because Zorro is a very special dog that lights up a room when he enters and I want a dog like that to like me.

More caregiver than therapy dog, Zorro has always been there for the people who needed him most, some at the end of their lives and some who would miss those people the most.

Our connection was fleeting and dramatic, a longer version of the moment is stored in my memory like a slow motion fight scene from the Matrix.

This photograph came together when I was finally able to vocalize a sound that engaged Zorro.

I was trying to say his name but it came out with a poor rationing of consonants to vowels; Shtwa-thwo-or-oht-za-mo-Alshs.

And then, Zorro burped. 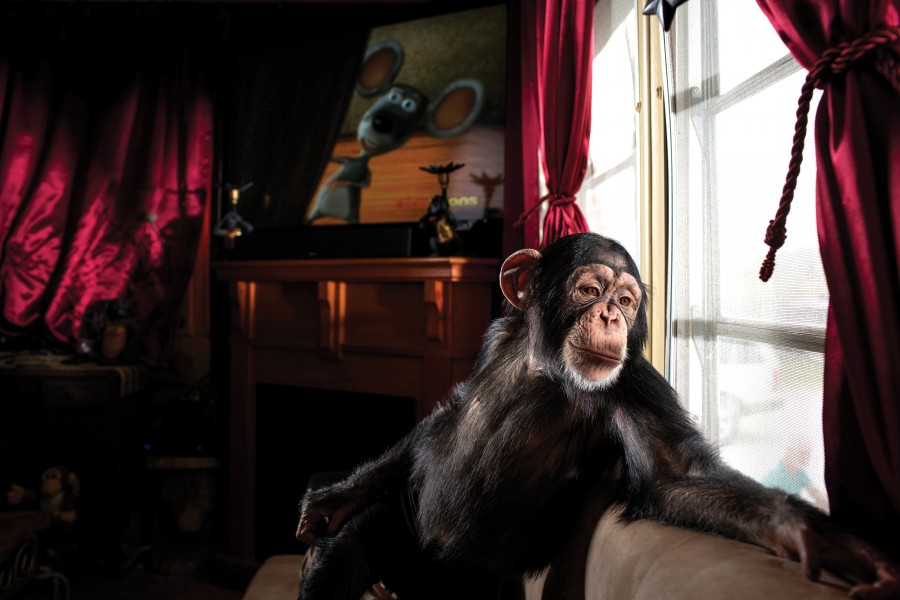 Photo by Vincent J. Musi / Chance, chimpanzee and animal actor who appeared in the film “The Wolf of Wall Street.” 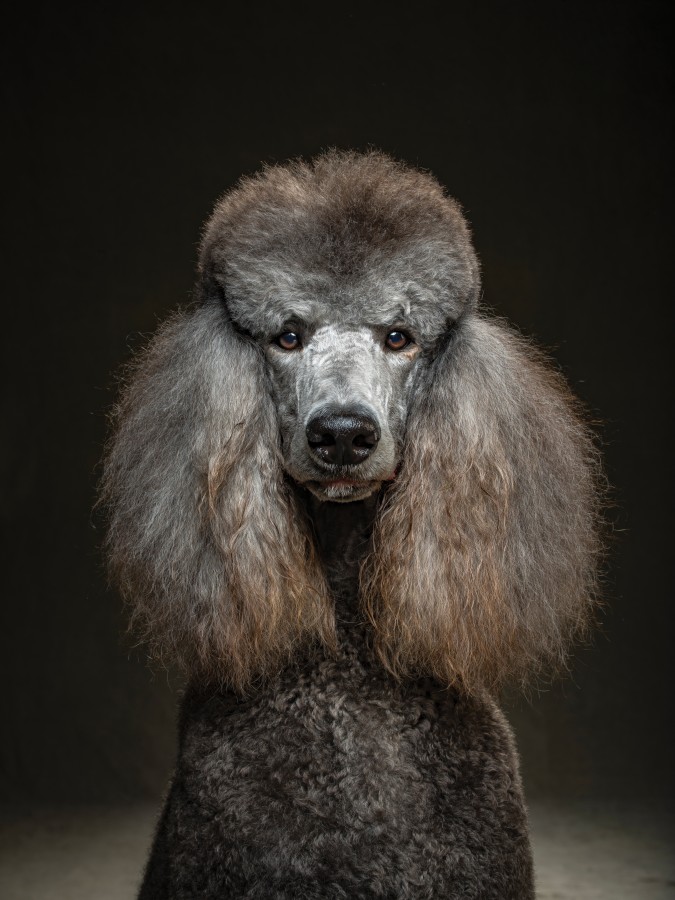 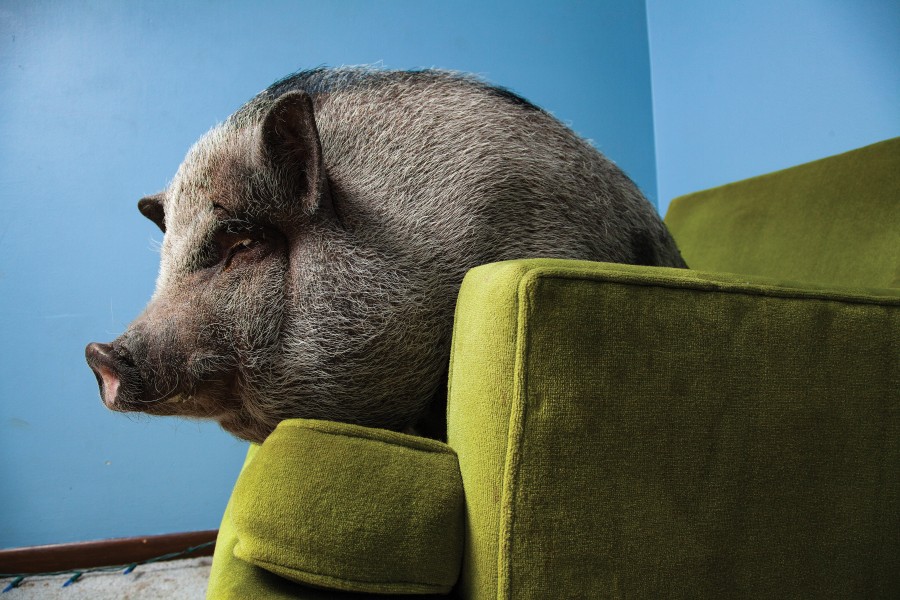 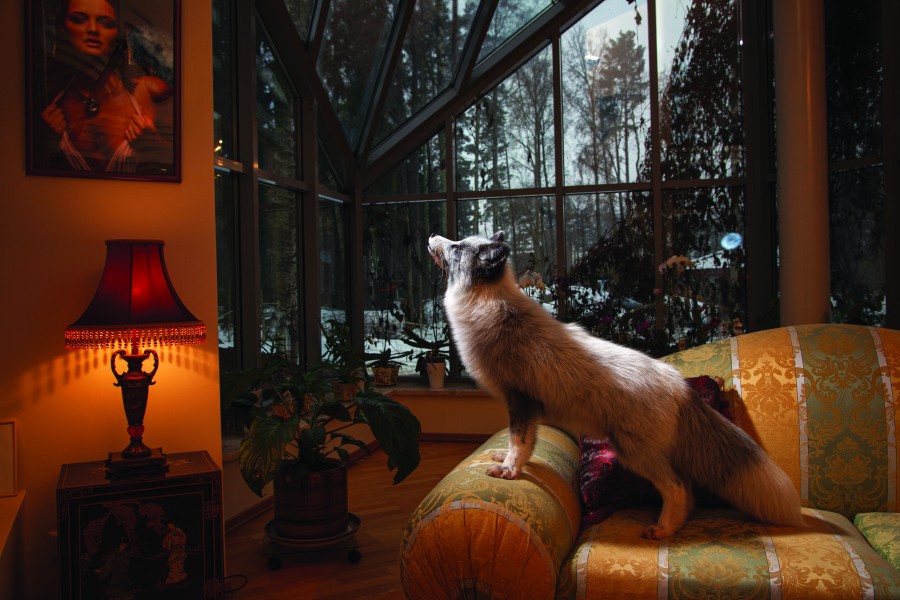 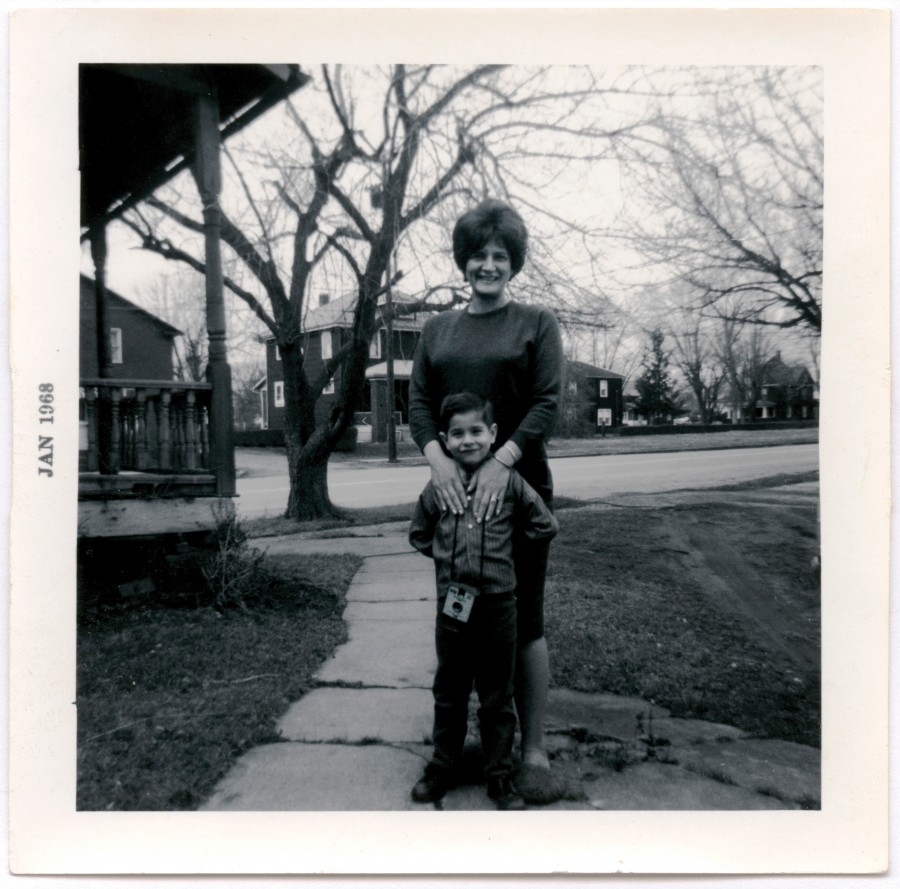 The young Vincent J. Musi, pictured in January 1968 with a camera around his neck, has since gone on to photograph everything from a honeybee to an elephant­—from around the globe to his Charleston studio.