A one-of-a-kind K-9 war hero continues to save lives every day, even after his service on Earth is over. 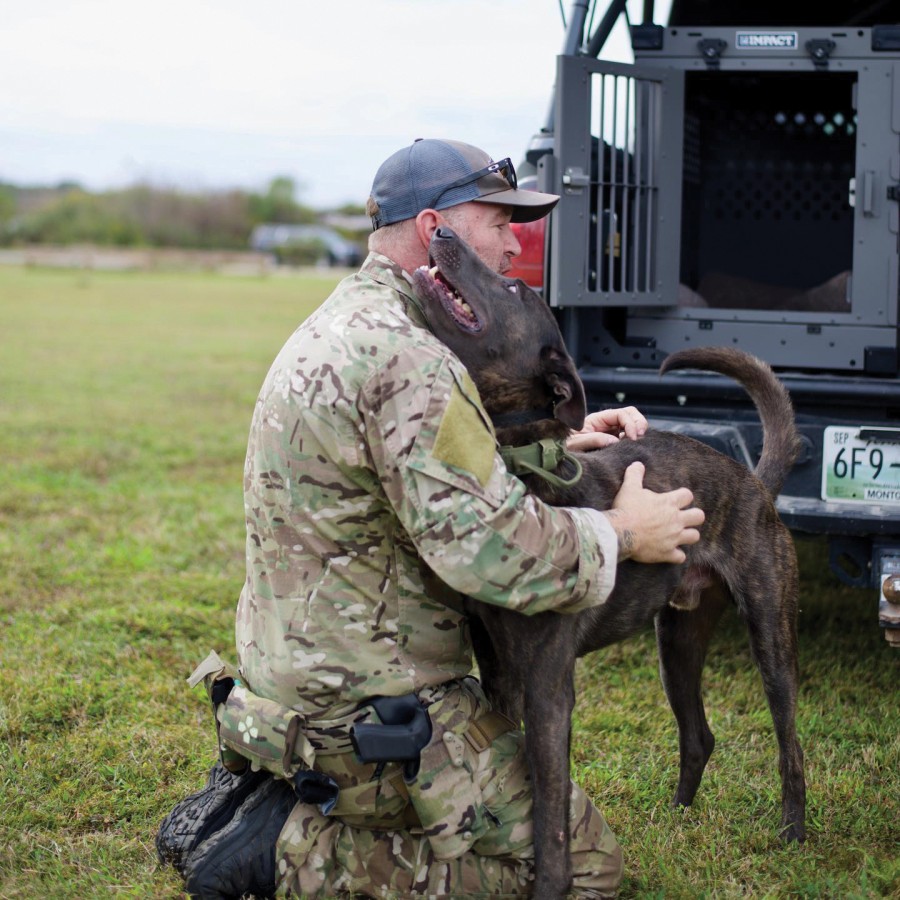 A one-of-a-kind K-9 war hero continues to save lives every day, even after his service on Earth is over.

Bear was a Special Forces working dog who served the United States by fighting, sniffing bombs and tracking targets over four deployments in Iraq — and the inspiration behind Second Chance K9, an organization that rescues high-drive service dogs and pairs them with military Special Operations Forces suffering from PTSD.

“I think veterans connect with these K9s because they’ve both had this trauma in their lives, which creates this incredible bond where they are just willing to lay everything on the line for each other,” said Hall.

Right now, Hall operates out of his backyard, rehabbing and training each dog using his expertise as a former Special Operations dog handler. The dogs he rehabs are high-drive breeds — German and Dutch shepherds, Belgian malinois — that would otherwise face the risk of being put down because their needs are misunderstood by the owners that surrender them.

“Bear was one-of-a-kind, just the best dog at his job. But that same dog that could go do his job and keep Americans alive would then turn around and be totally cool with a kid coming up and petting him,” Hall said. He described Bear’s influence in the organization today; “Bear is still heavily involved, even though he died a few years ago. It’s not an easy job [pairing the veterans and dogs] — you have to look at so many things. At the end of the day, after I’ve looked at the case and the data, I opened my heart to Bear to let him help influence the decision.”

With more funding, Hall hopes to expand Second Chance K9 to a 100-acre oasis, giving him the capability to have 16-20 dogs in the program at once, ultimately reaching more veterans in need. Visit Second Chance K9 at secondchancek9.com and learn more about the organization from South’s Q&A with Travis Hall below.

South Magazine: What sets Second Chance K9 apart from other organizations that do something similar?

Travis Hall: Because I am a Green Beret and I was special operations, I did run a dog for four combat deployments. For me, what sparked me to start second chance K9 was the change I saw in myself when I had my dog. What’s different about us is that we are solely focused on the high-drive dog breeds – that military teams would use – that don’t necessarily have a job or a military future. There are a lot of people that see these types of dogs out there doing amazing things, and they go and get them, then they turn out to be too much for them to handle so, they end up becoming rescues. So that’s really what our purpose is, is to one: rescue these dogs and to give them a job and two: pair them will former special operations guys who have, you know, 15-16 deployments with these particular breeds of dog being by their side. We create a team environment when we put one of our dogs with a veteran, because they’ve grown up in a team environment and in retirement, they no longer have that.

We work with anybody who falls under the USSAC umbrella, USSAC is a chain of command armed for special operations, so we work with navy seals, green berets, green rangers, air force special ops. We’d love to help everyone, but we’re a small rescue and I teach every single dog personally, so while we’re small, we can only help that community. Another reason we focus on that community – even aside from the fact that I come from that community – is because our special forces veterans are carrying the weight of this war. I’m now at 18 combat deployments, and that’s pretty average. The special forces/operations community is really paying a heavy price for this war. And while there are a lot of other rescues and non-profits and things like that, we feel right is kind of the time to focus on them.

SM: Does your organization operate nation-wide?

TH: We’re small right now. Just like you can’t mass-produce these special operations guys, I can’t mass-produce these dogs. We take that same stance on it with the dogs as the Green Berets do. We are nation-wide – we have big dreams and goals, even though right now we’re operating out of our backyard. While we don’t have the funding for it yet, we’d like to have a facility for veterans so when they come to us, they have a retreat to come to and actually immerse themselves with the dogs and get into the training like that. And they’d be responsible for a certain amount of dogs in the program while they’re there – bathing, feeding, exercise – and that will allow us to expand our base and be able to service more people and dogs.

SM: Bear, your special forces working dog, seems to heavily inspire much of Second Chance K9 and is mentioned often on the website. What was it that set Bear apart? Is that something teachable, or a quality you look for in dogs you place?

TH: Bear was one-of-a-kind, just the best dog at his job. But, that same dog that could go do his job and keep Americans alive would then turn around and be totally cool with a kid coming up and petting him, and just be wagging his tail and super excited for this child to be able to pet him. He was a true Green Beret in that he was a true bite dog in that he would do some apprehension work in the house, and he was a bomb dog, and he was a tracking dog who would track people who were running away from us in Iraq. To have him just be this true team player and love to work, and then retire to me, he took all of that drive and passion and put it into our family. He knew it was time to switch that instinct off, and he became the best family dog in the world. Still protective and always vigilant, but at the same time, just eager, willing and able to be around people and be the coolest dog ever and travel with me everywhere I went. It was almost like if I had a human team that I could just take with me everywhere. Like, we relied on each other. He had some PTSD, so we relied on each other to keep each other safe.

SM: I read that Bear suffered from PTSD – triggered when you left the force. Is there something at play with that dog-handler connection? As someone who has two dogs, I totally understand that connection, but is there something deeper or biologically rooted that you’ve learned of?

TH: We only work with rescues, we don’t breed dogs, which honestly has its challenges – I work with dogs who have seen the worst of the worst. Some of my dogs have had trauma in their lives. I think this bonds veterans with these k9s, because they’ve both had this trauma in their lives, which creates this incredible bond where they are just willing to lay everything on the line for each other. The strongest bonds are ones built through adversity. The strongest bonds I’ve had with other people are from Iraq, because we did things together that were hard. The strongest bond with a dog I’ve ever had was with Bear, because we went through things together that I’ll never do again. With our rescues, it’s the same thing. We rescue these dogs from terrible situations, we rehab them, and we give them purpose. When they meet their veterans, they have this understanding, like, you’re here from me and I am here for you – this is it. I don’t have to be afraid anymore, kind of thing.

Bear, I think, is still heavily involved, even though he died a few years ago of old age. I feel inspired by Bear in that, he helps me make the decisions and the pairings that I make between veterans and K9s. It’s not an easy job – you have to look at so many things. At the end of the day, after I’ve looked at the case and the data, I kind of open my heart to Bear to let him influence the decision. I mean, I’m not a religious guy, please don’t think I’m beating on a bible, but knowing that Bear is kind of the reason that I am able to be successful pairing these guys with the right dog is huge for me.

SM: Are a lot of the dogs descended from Bear? Or are they more retired military/service?

TH: It’s not just one breed, it’s the higher-drive breeds, like German shepherds, Belgian Malinois, Czech shepherds – it’s those dogs you see in the films that people think, “Oh, I should go get this dog,” because they saw it in a film or because this dog got the number three guy on the U.S. target list, what they don’t understand is that these dogs have to have a purpose. Our purpose is them being a service dog for our veterans.

SM: Now that you’ve got something special going with your organization, what are your goals?

TH: Near future, in the next couple years, I’d like to have one hundred acres. I know that’s a lofty goal, but I would like one hundred acres and I have been working with an architect to design micro kennels, in that, every kennel I’ve ever been to is like 50-60 dogs to one kennel space, and it’s just stressful on the dogs and it’s a lot for people to handle in taking care of those dogs. So, as we get funding, I’d like to start building these micro kennels where each kennel will only house 4-6 dogs and that veteran will live in an apartment over that kennel and be responsible for those 4-6 dogs during his stay. The goal is to have just this quiet space where guys can unplug from the noise and be around dogs and help us to help more dogs. Right now, we are in our backyard and we can only rescue two dogs at a time because we don’t want to violate city ordinances, but when we move to the country, and we build the kennels we want to have 16-20 dogs in the program, whether that’s, “hey, this dog’s not going to be a service dog and we’re trying to adopt it out to a good family,” or, “hey, we’ve got all these dogs in the service dog program and we’ve got all these guys who want to be a part of it.”