A guide to → eating // drinking & playing // at Savannah's newest venue 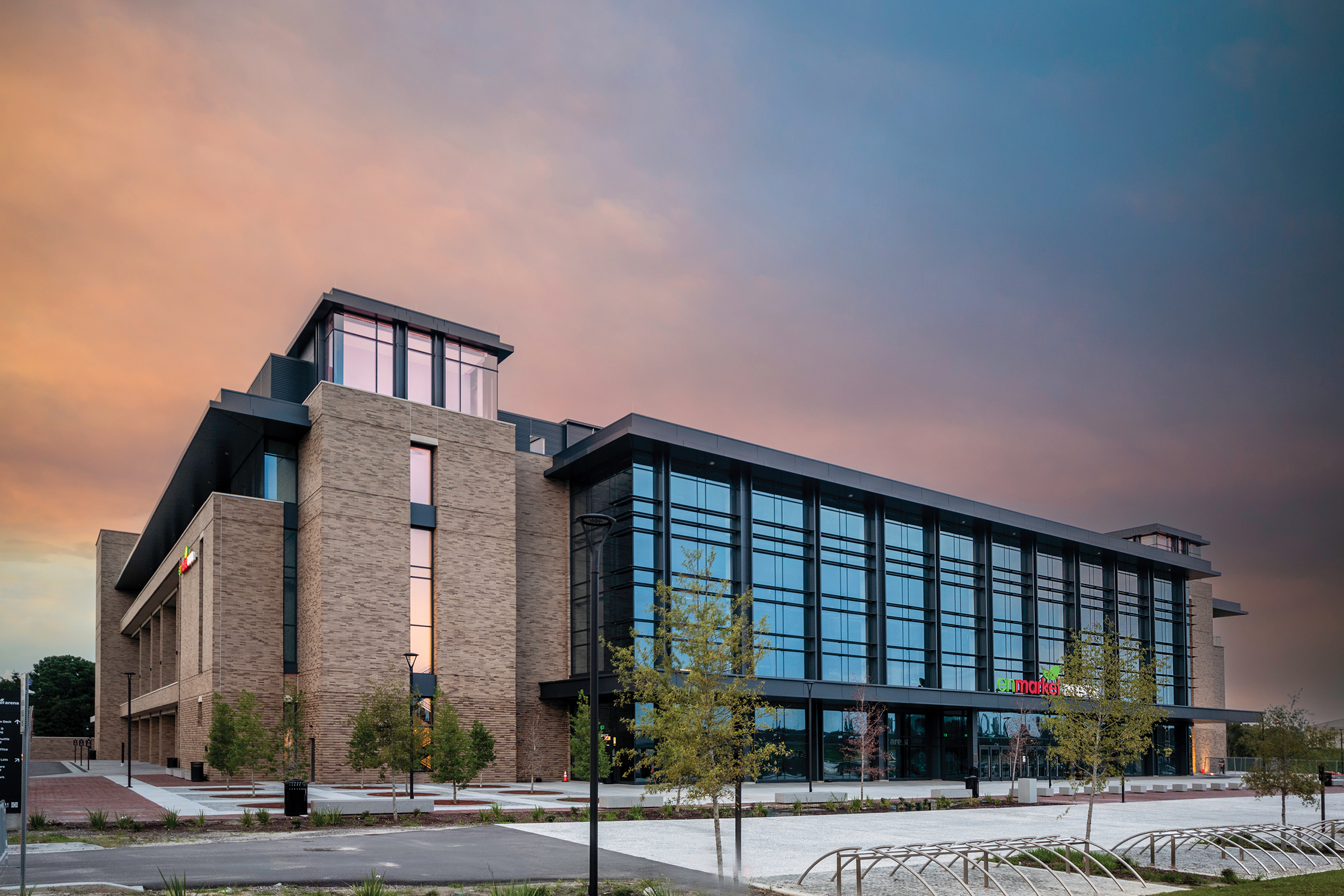 “A new wave of entertainment” has hit the Coastal Empire as the newest, most celebrated disruption in the southeast. Decades of heightened anticipation has over-delivered with an arena experience unlike any other – intentionally designed to show off for worldwide guests and make locals fall more in love with Savannah.

Landing Savannah front and center on the map for Sports and Entertainment, meet the arena that’s going “against the grain on purpose,” and transforming the live experience. The 9,500-seat, 215,000 square foot location is home to twelve luxury suites, five lodge boxes, a VIP suite, and an ever-growing rollcall of downtown’s best and brightest names in hospitality. “Six days a week they’re running the city’s top hotels, restaurants, and hot-spots, one day a week they’re with us,” says Nathan Chambers, GM of Food & Beverage of their championship roster of chefs and vendors. enmarketarena.com

Join us for a tour! 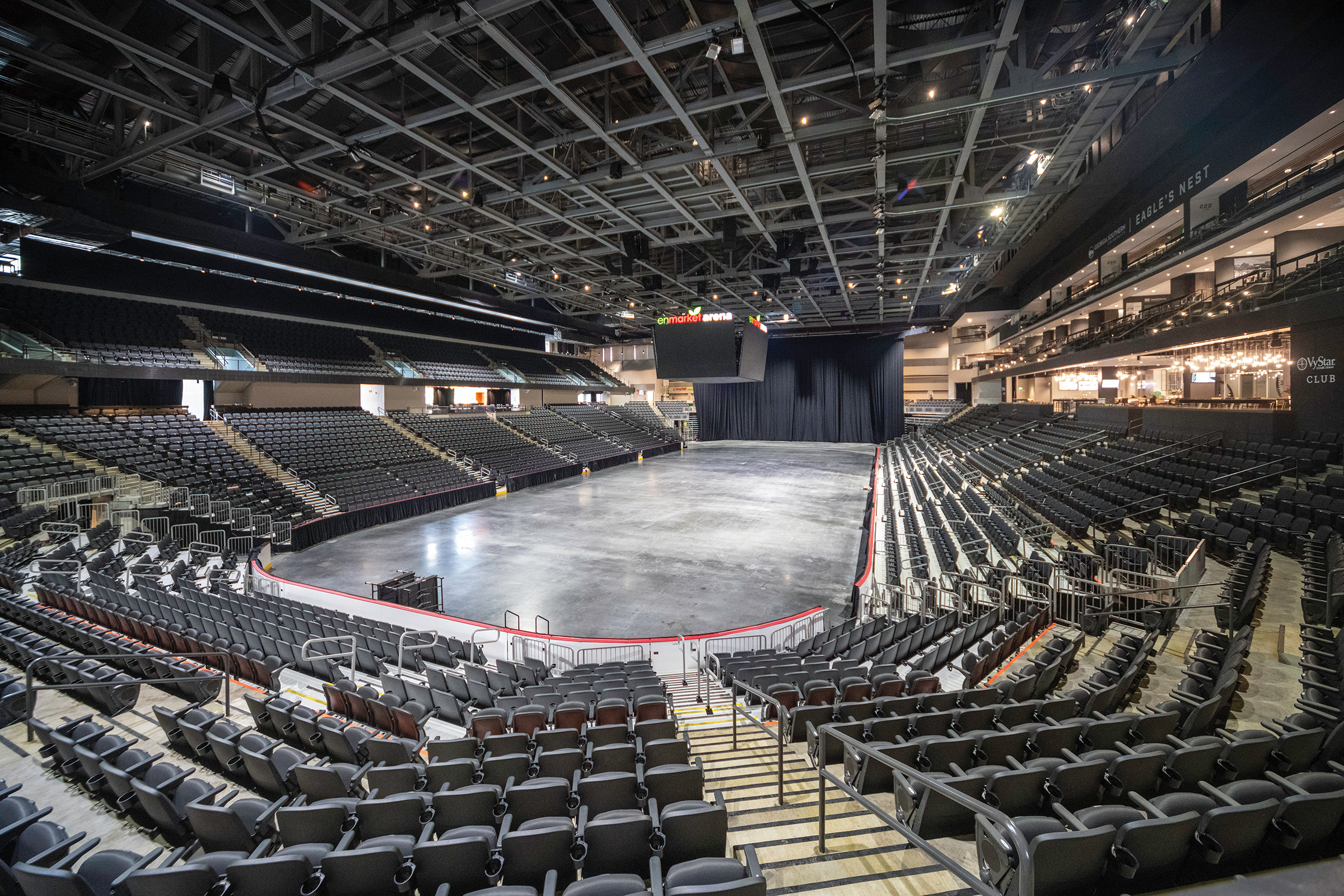 Starting October 2022, Savannahians no longer have to hold their horses for the once-a-year Hockey Classic. The Savannah Ghost Pirates hit Enmarket Arena as the new ECHL team and the key to year-round games.

Make history entering the arena on the largest asphalt mural in the County and one of the largest in the state. Measuring nearly 700 feet, four murals each 120×20 feet, 2,400 total were designed by Xavier “Zay” Hutchins, Nae’Keisha Jones, Alfredo Martinez and Brian MacGregor.

Sustainable and having received a LEED 4 certification, Enmarket is 75% DBE (Disadvantaged Business Enterprise) / local / women and minority owned businesses and draws all-star acts to the state of the art venue for 150 events a year. 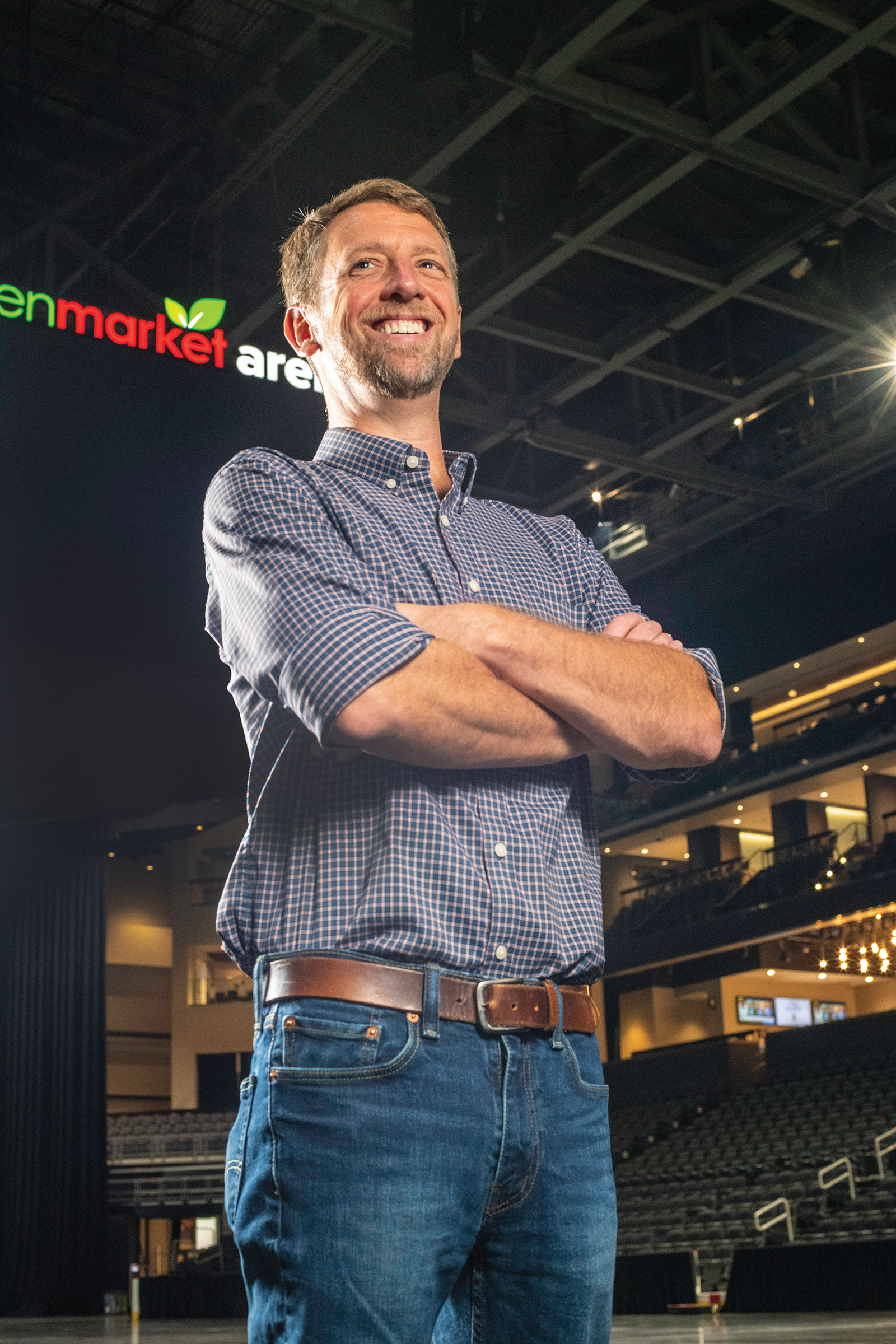 At the helm and overseeing this vital partnership for the city of Savannah and for Southeast Georgia is Matt Clements, Enmarket President, who took on the role when his predecessor  Brett Giesick stepped up as “the first-ever chief operating officer at Colonial Group Inc., Enmarket’s parent company,” and Clements was elevated from his previous role as VP. A native of St. Simons Island and graduate from the University of Georgia, Clements knows first hand the potential for the partnership between the community and the Savannah-based convenience store chain who won the naming rights for the arena in 2021. 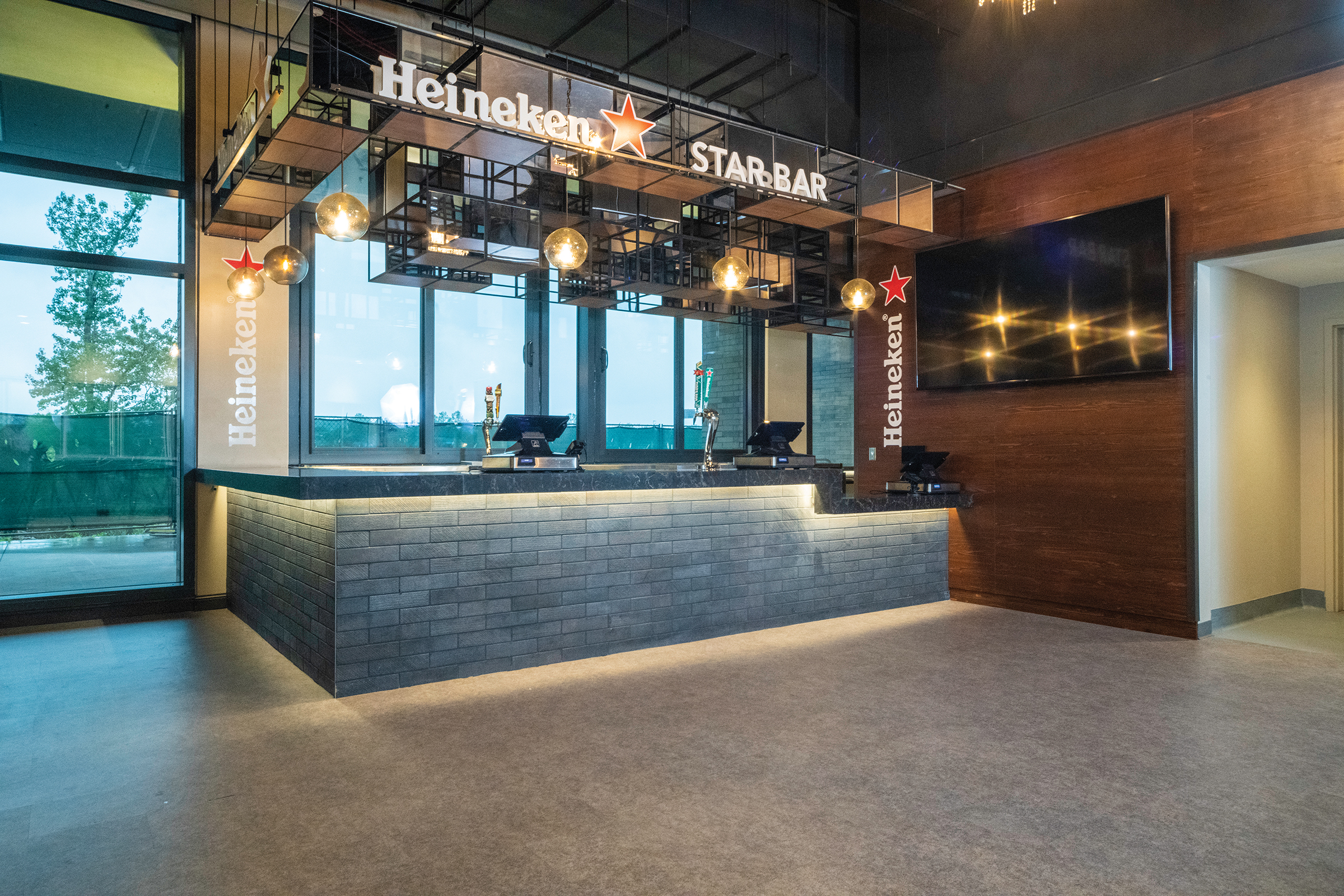 Get Your Drink on

Beloved beverage brands, drafts, crafts and can cocktails are all part of the Enmarket Arena beverage experience, and the possibilities are endless at the arena’s dozen or more places to grab a to-go! They invite you to enjoy and tilt back something cold!

On the South end of the main concourse, migrate to a recognizable name for a full range of classic and can cocktails and line of drafts opening out to the top end of the main entrance stairs.

Not just Tennessee whiskey at the Jack Daniels Bar alongside a suite of staples and standards. Pull drafts or cheers with craft or can cocktails settled in the center of activity on Truly Terrace.

Among Enmarket Arena’s portables with potables, hit the third label-labeled libation location known for its branded Twisted Tea and Truly Canned Drinks, situated (where else?) on Truly Terrace.

Belly up to the Bar of Bars. The lineup goes on with other label-featuring counters like The Bacardi Bar or Bud Light Corner (where you’ll find Spanky’s), South Bar, Cutwater Corner, and the suite holder’s exclusive offering, The Ghost Coast Bar. The elite up and coming speakeasy tucked under the stairs is a well-appointed private space with capacity to seat sixty, with concert seats positioned at stage end, stage left, within 200 feet of the center microphone. 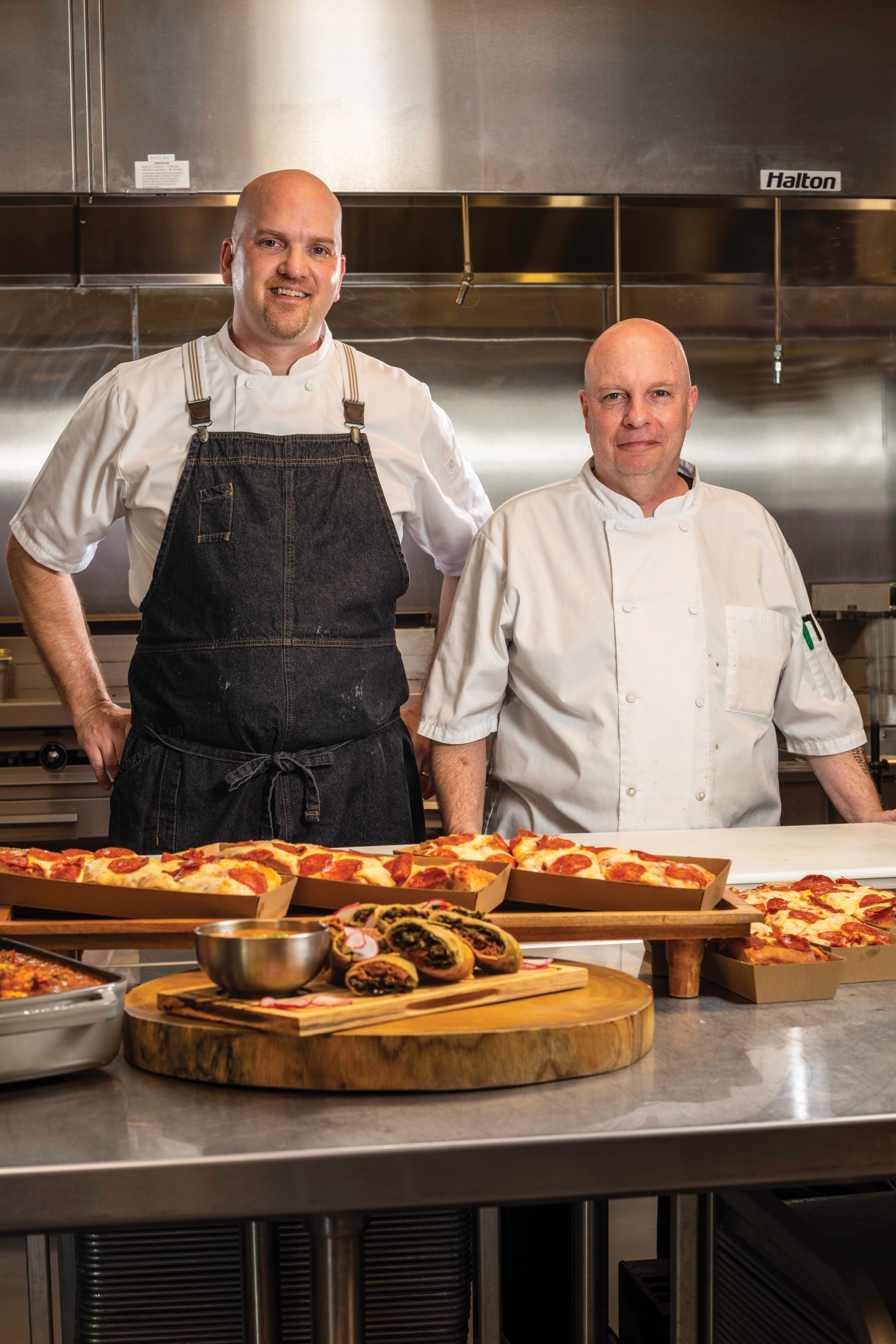 “You don’t have to go out to eat beforehand!”

…a distinction that sets Enmarket dramatically apart on the arena foodie scene. “The best thing about food is the stories” says Food and Beverage GM Chambers, telling of bringing the local bests into the arena. Not barrel bottom jalapenos and mystery cheese, but fresh cut jalapenos, homemade queso, Birria tacos, instagrammable culinary re-creations of David Sampson, formerly of the Perry Lane downtown. “Comfortability doesn’t make for great ideas,” says Chambers, “so we’re stepping up the game while staying sustainable, wanting to show the community, we’re here for good.” 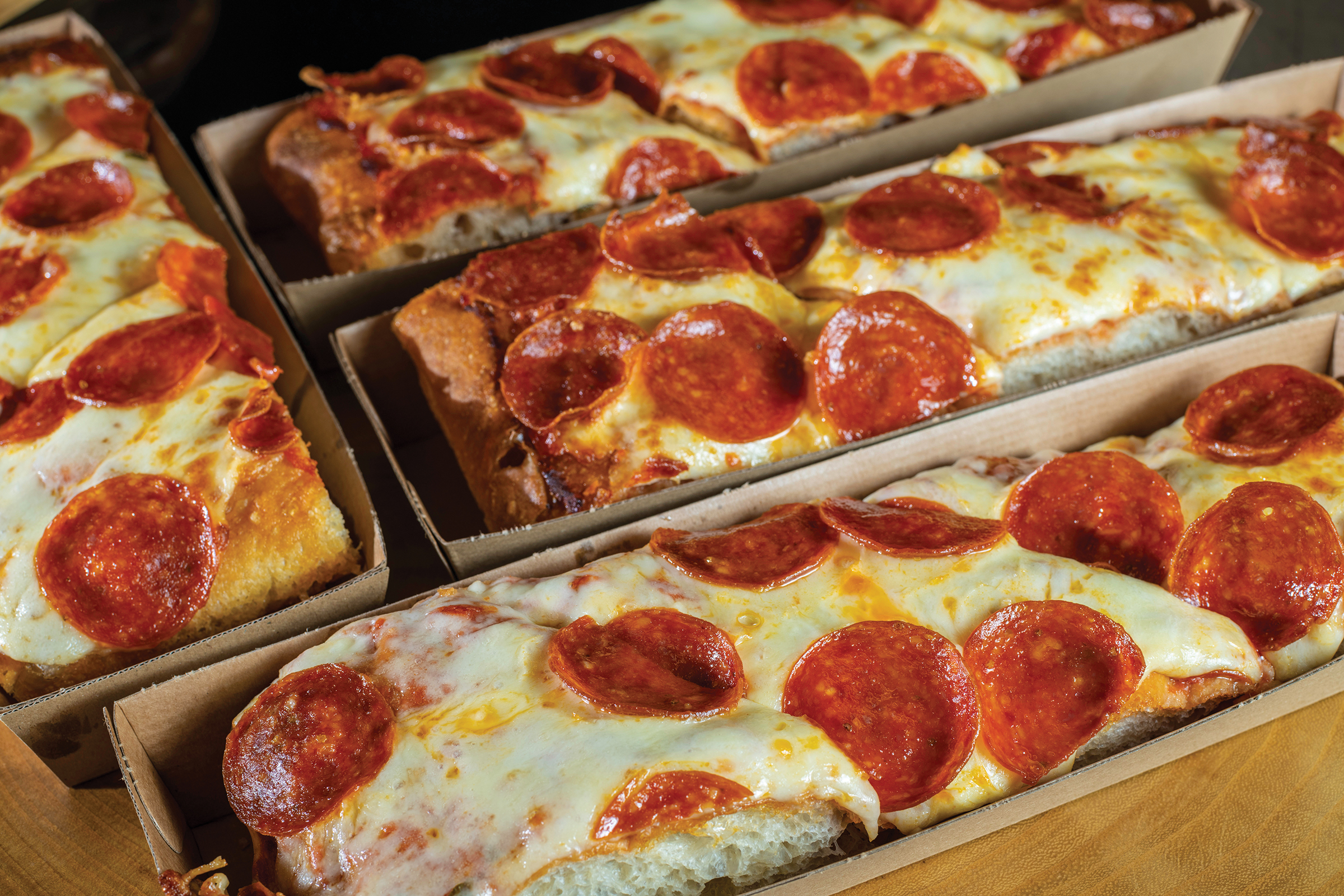 Made from scratch without a pizza oven, hand-made foccacia pizzas.

Seen in the streets of the Hostess City and now in the aisles of Enmarket, this beloved beverage brand boasts all mixes are homemade via secret recipes, “made fresh from real fruit juice.”

Enmarket-meets-Enmarket in this in-house fan fave. The Grab N Go we know and love is arena-adjacent and highlights the Heinies and other convenient takeaways.

A main thoroughfare for your Truly refreshing favorite hard beverages, live music on occasion, and a hightop view of the crowds where you can see and be seen tilting back the Truly. 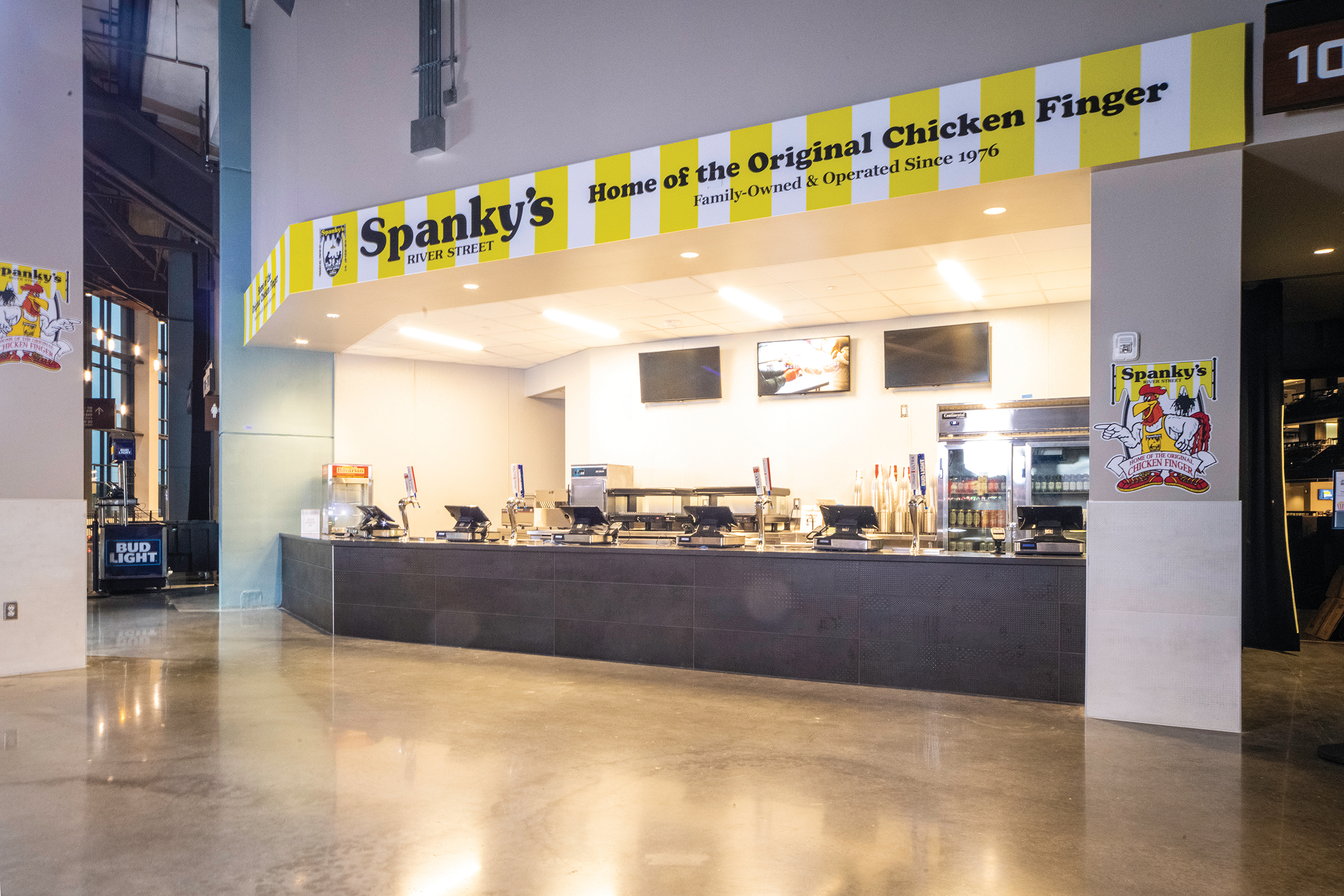 What’s good for downtown is good for the arena when it comes to the well-known and loved Savannah spot Spanky’s owned by Ansley Williams who started the concept four decades ago. Home to “the original (hand breaded) chicken finger” (designated in the official United States Congressional Record) and for cultivating a staff that feels at home and spreads the feeling to patrons, this “best bar food in Savannah” can be enjoyed onsite on the terrace with all the Spanky’s accouterments like their famous Honey Horseradish Sauce and Spanky’s Spuds. 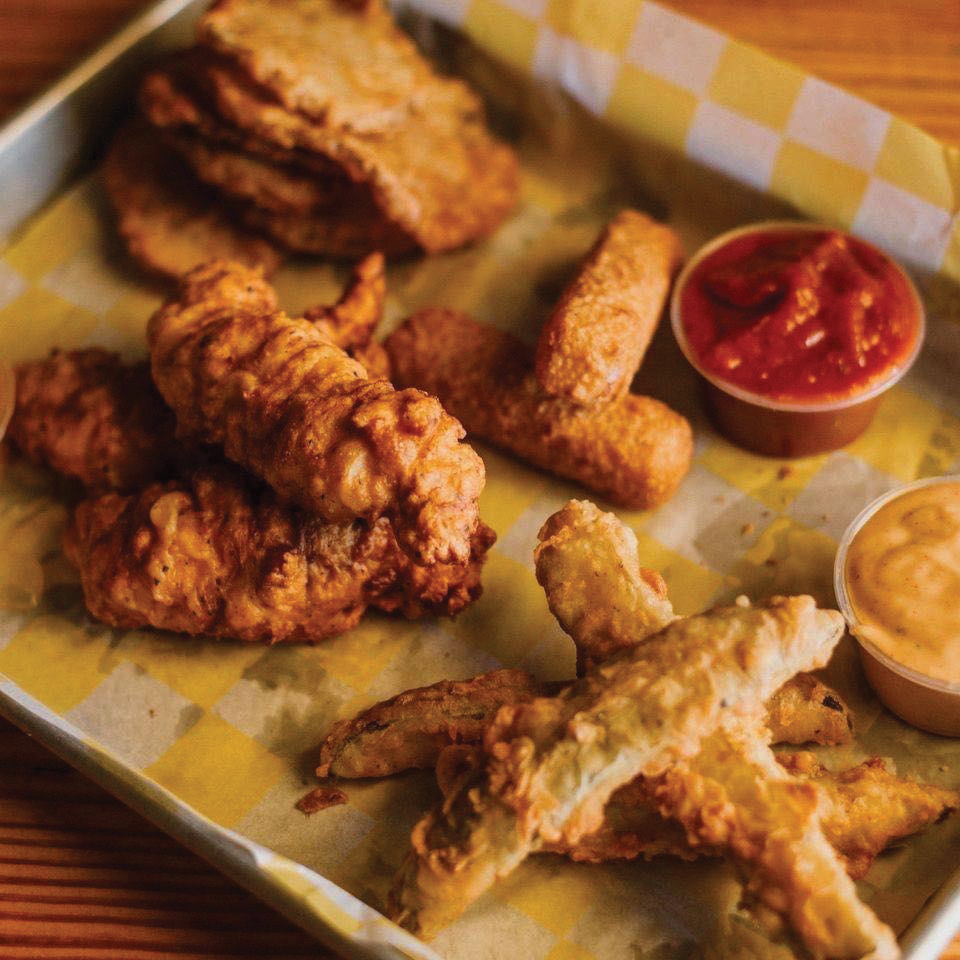 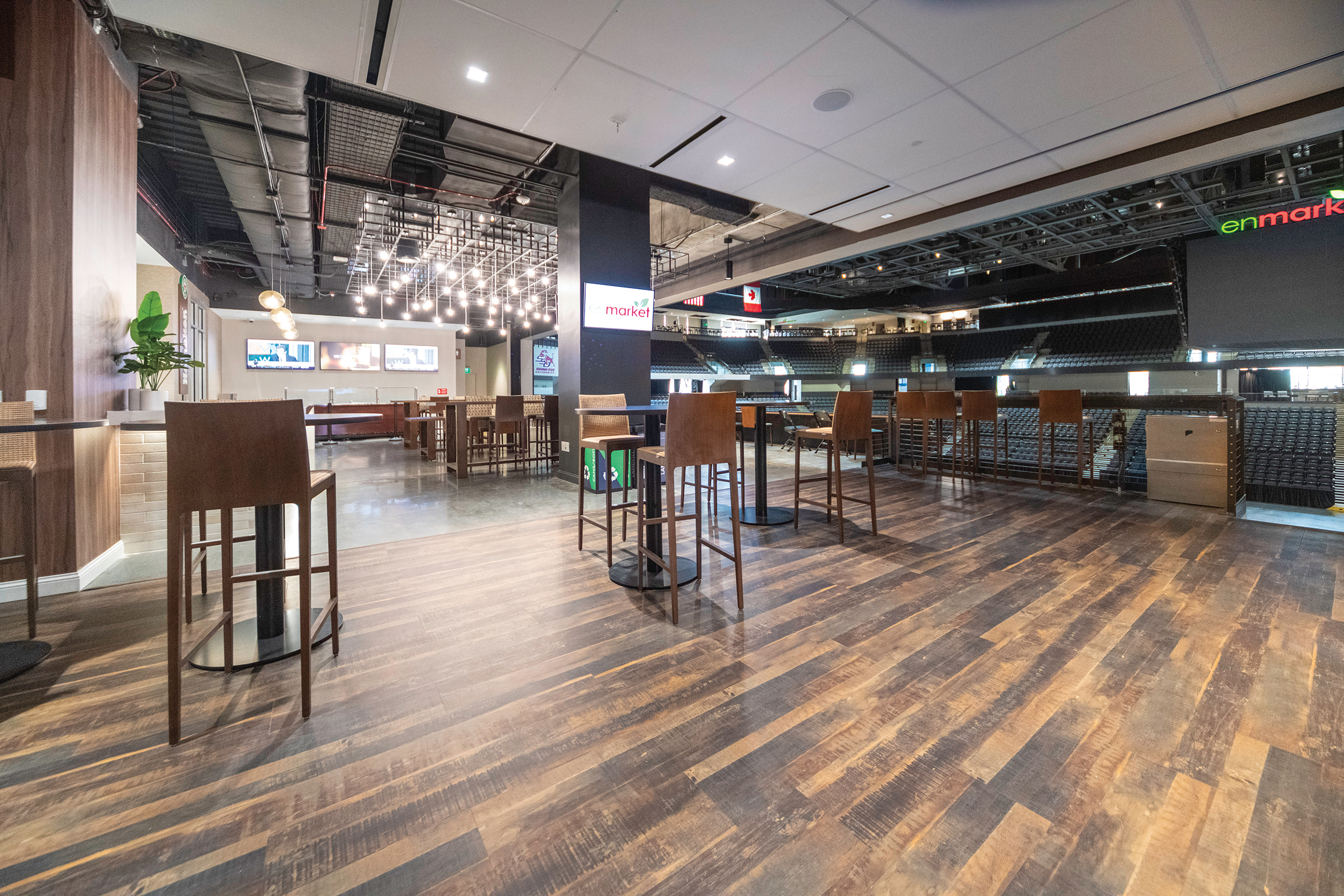 Party bus meets box seats in this unique space with an incredible view. Whatever you’re celebrating – birthday, anniversary, retirement, retreat or team builder – any event is a memory in the VIP Suite where you create an “experience within an experience – hosting up to 60 guests in a private customizable luxury setting.” The Suite gets its namesake from 13 Secrets Jewelry Gallery, a local Savannah company that exudes lux and VIP vibes and just happens to be the 13th box in the arena.

Level up to the exclusive VIP experience and environment, inviting 14-24 guests to join your private lounge, a personal meeting place for your party before, during, and after the event, with the luxurious setting you’d expect from a world-class venue. Suites were developed with the intention of fostering a sense of gathering and community while in a high-end venue, with lux seating and prime access to customized food and beverage service packages.

Not to be overlooked, this deck levels the playing field giving you a wide span of savory selections ranging from gourmet to grub, but always on par with the arena’s “biggest thing in Savannah’s” raging reputation. Like other areas of the venue, part of the goal was to bring in area residents’ comfort food comfort zones with recognizable Savannah storefronts. On every Enmarket Arena level, you’re invited to get excited about the epicurean experience you know and love from the neighborhood, and to be able to say, “I had them in the arena.” 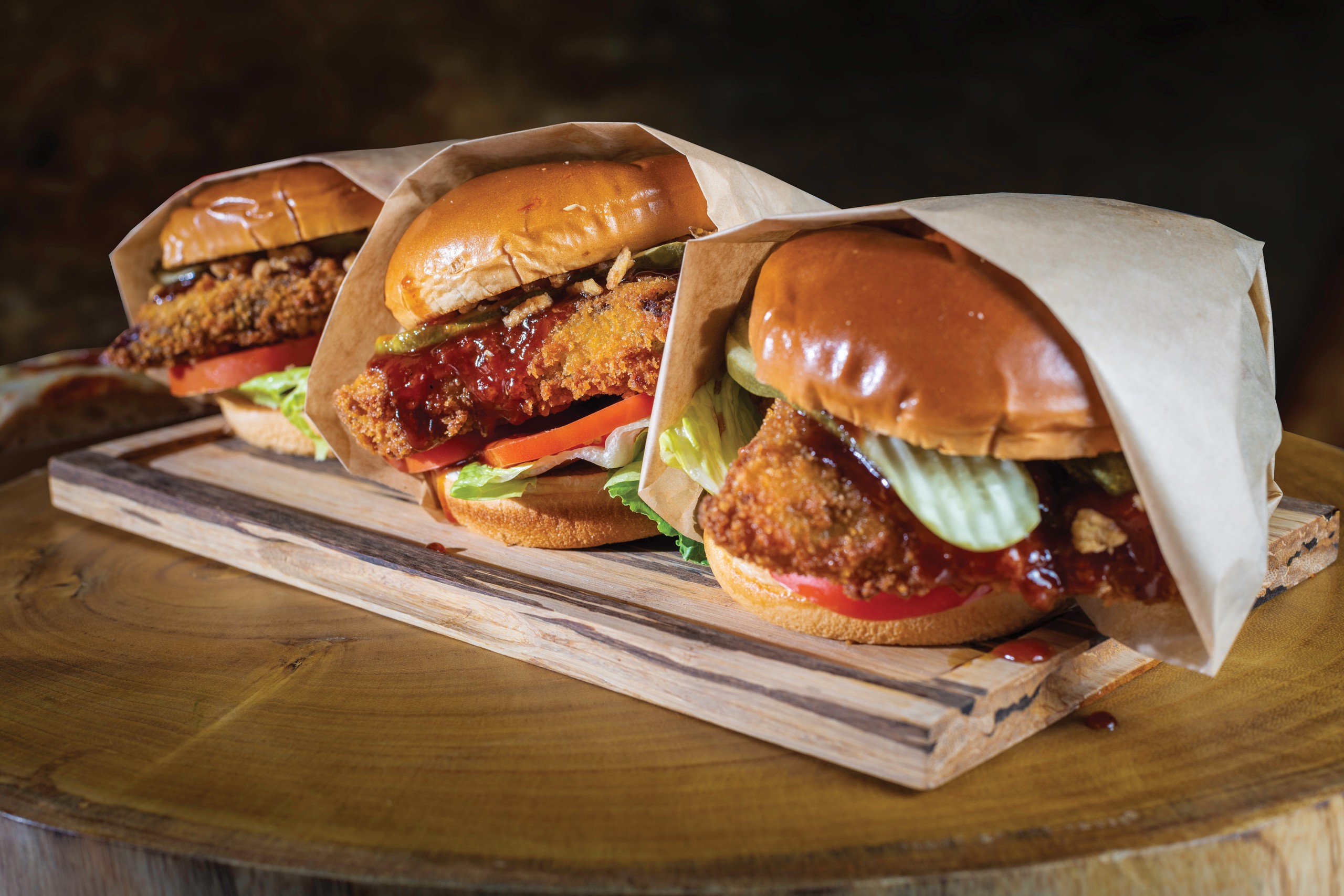 As “upper crust” as even the pizza crust can be at this “disruptive” industry leader, you are still at an arena and often in need of the basics like chili cheese dogs, slaw dogs, and local brats.

Have you heard about birria tacos yet? If not, they’re worth a trip to Enmarket Arena and one of the primary ingredients

in the “you don’t have to eat before the show or game” formula. Pair those with pork, beef, veggie quinoa tacos and a range of domestics, and you’re set to take your seats.

Welcome to the Nutrl zone, the second arena location under the Grab N Go banner, with an emphasis on NUTRL (“vodka, seltzer, and real juice”) products and a relaxed vibe of pick up and pack up that fulfills its commuter style name.

On the overlook’s brewhouse level and just past Nutrl, both literally and figuratively, Nutrl veers into Wicked Weed, offering a complete list of full service cocktails and Wicked Weed beer alongside a few well brewed friends. 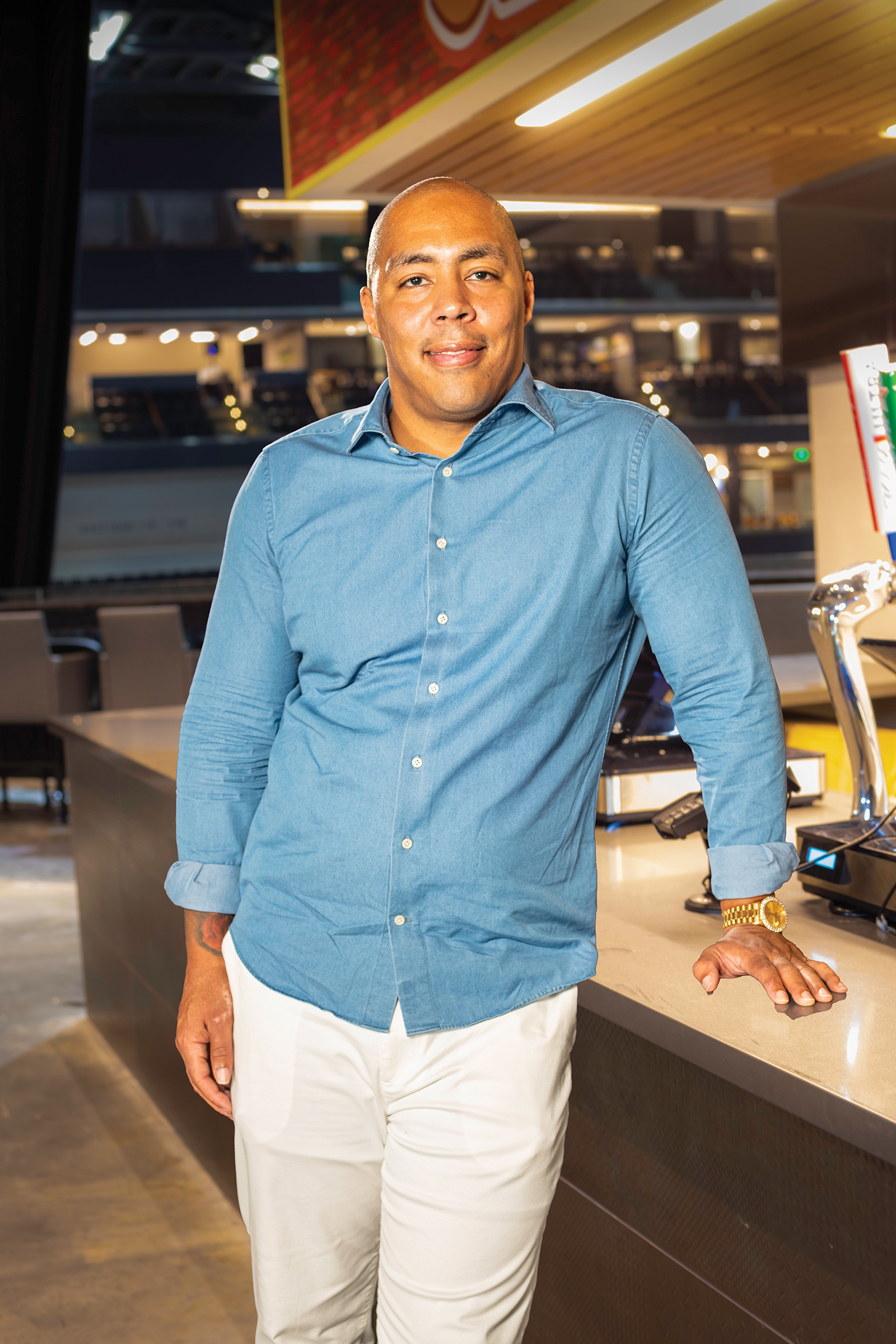 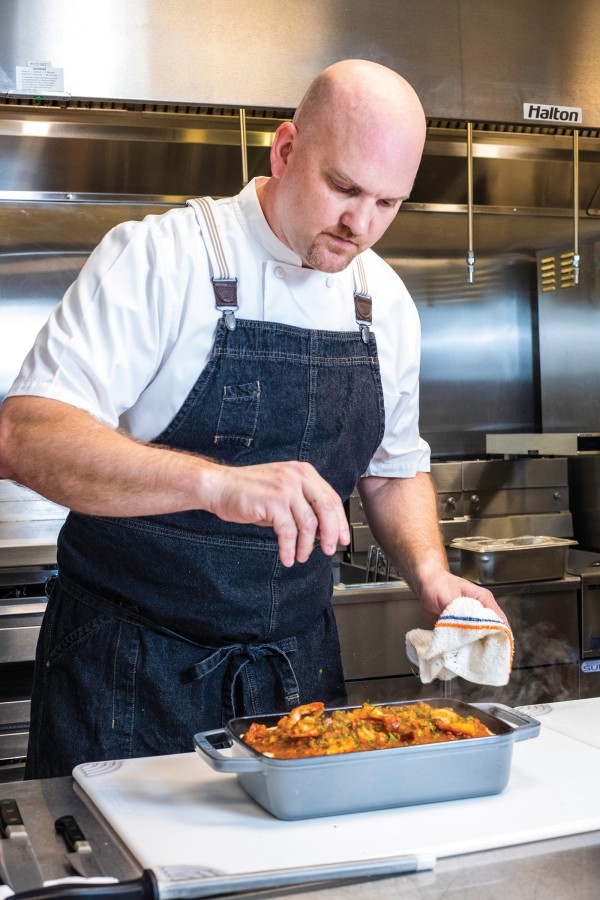 Executive Chef of the Enmarket Arena

David Sampson, Executive Chef of the Enmarket Arena, brings with him a pedigree from Palmetto Bluff (Bluffton, SC) to Perry Lane (Savannah, GA). He doesn’t take off that chef coat just because “traditional” arena food can be tossed from aisle to seat. He innovates and elevates across platforms, from food trucks to VIP clubs. He also delivers according to the unique and challenging calling to plan massive menus for audience styles that range from Lumineers to hockey to Bocelli and back again. Accomplishing the “premium concession for a 5-star club” vision no matter the booking, Chef Sampson feeds them all. 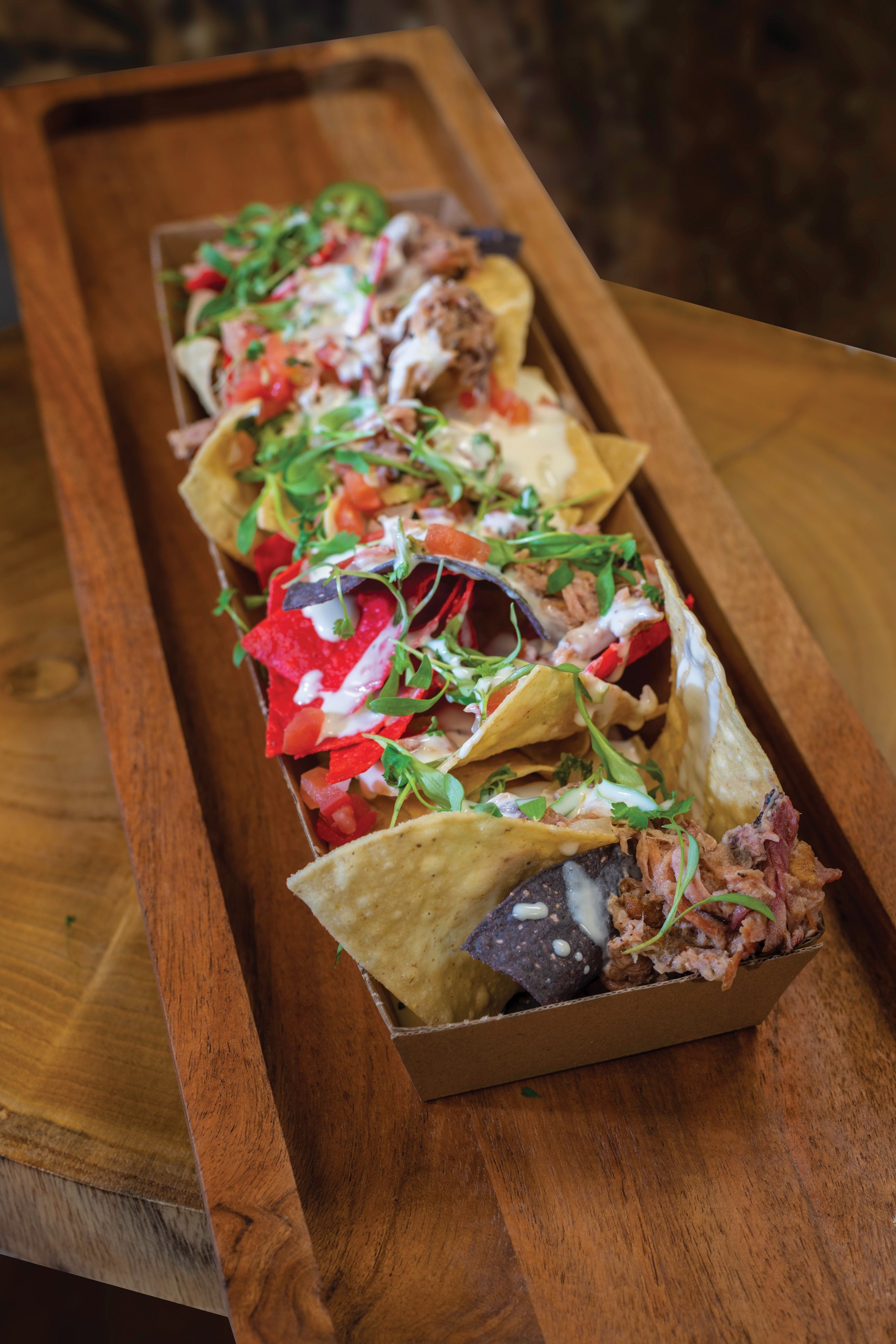 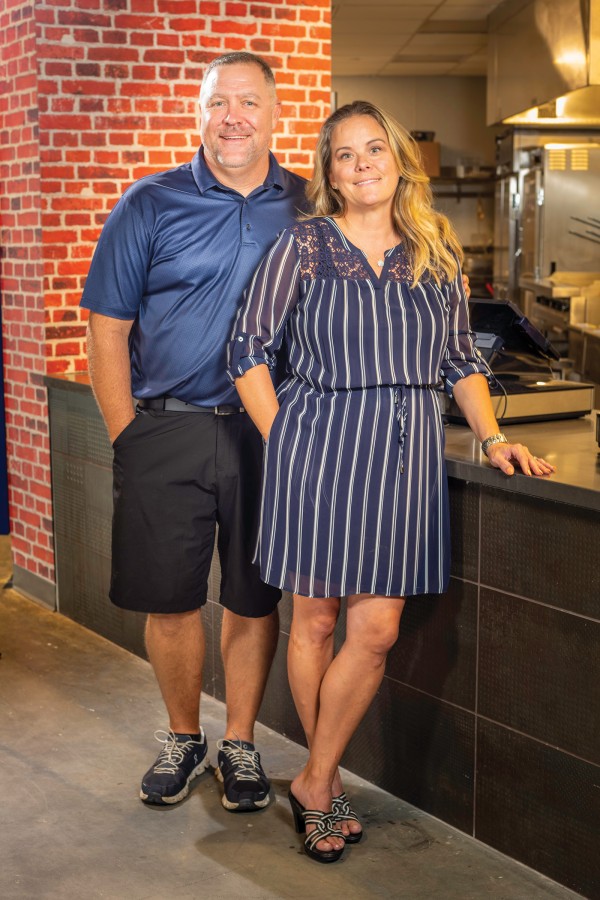 Welcome to the Tavern

The only true concession on the arena’s floor level. Another staple of downtown SAV that set up shop as part of the community experience at Enmarket Arena, the Tavern serves up Americana full force with original PS tavern burgers, Chicago hot dogs, pretzels, and loaded tater tots with a hand toward the homemade including house dough and sauce made fresh and 14 different rubs and sauces. True to its tavern trade, try the triad of drafts, crafts, and half-and-halfs, and migrate here as another spot that comes with the coveted Enmarket Arena souvenir cup.

“The Best Experience at the Enmarket Arena.” But don’t take everyone’s word for it, take a page out of the premium book and experience it for yourself.

Complete with full-service restaurant style food service and menu, this perk is accessible only by Club Seat Members (sections 117-120) and offers an incredible line of sight, premium food and beverage options, private restrooms, and the exclusivity of a private lounge.

Chatham Parkway Toyota Club. Premium options meets (mostly) public space with room for 250, and a Southern twist on premium style food themed towards each artist or event including countless concessions, portables, and bars.