Movin’ South: From Cali to Sav 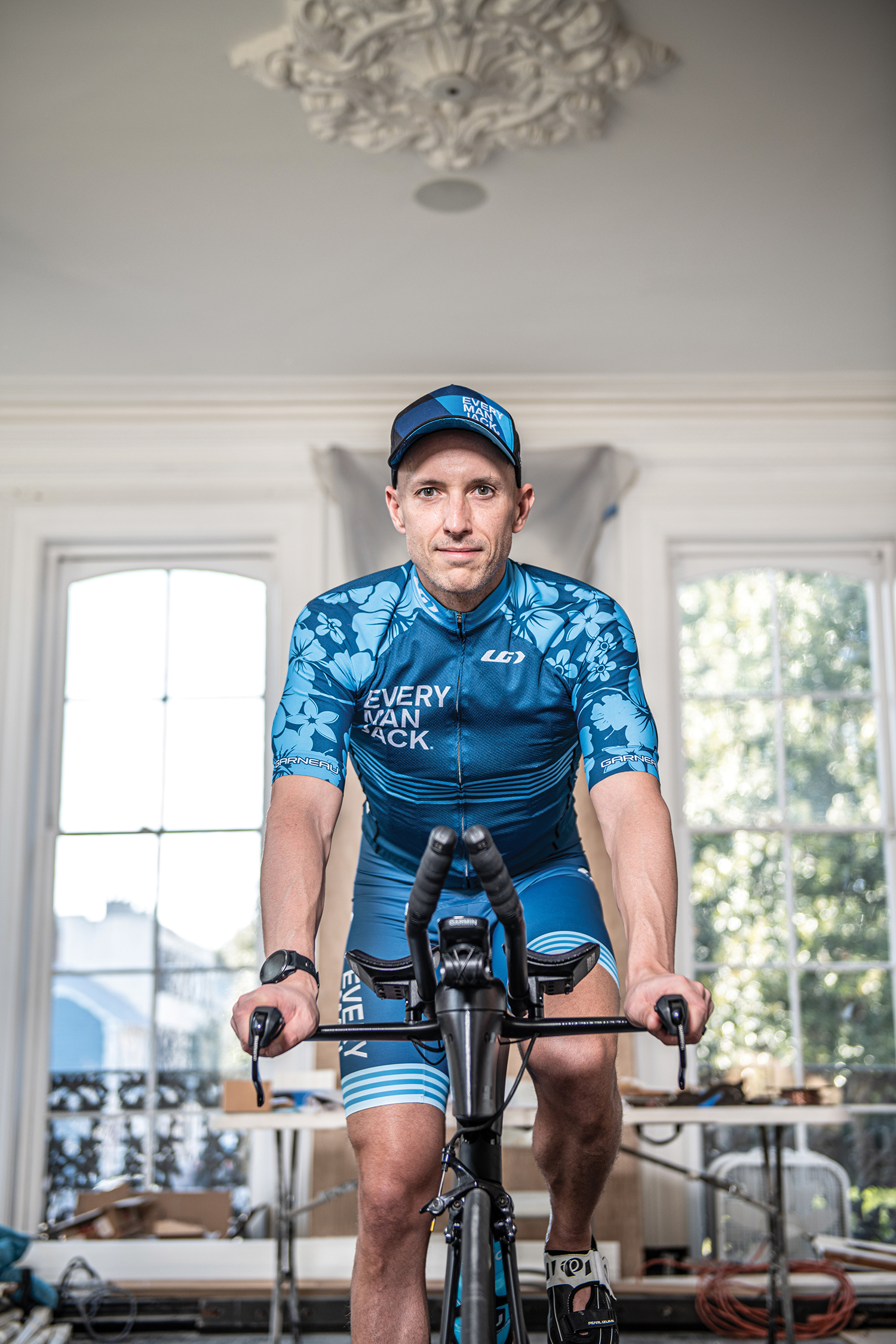 Kiel Bur’s story is multifaceted, and the part that is so vital is his daughter. When she was two, she was involved in a car crash that left her with a significant brain injury. As COVID-19 began, the Bur family needed to reevaluate. It was important to find a school that could meet her needs, even during such strange and uncertain times. Kiel and Randi began researching different schools for children with special needs and came across the Matthew Reardon Center in Savannah, where she was accepted.

The Bur’s, both real estate developers, purchased a home once owned by William Kehoe, and are enjoying its renovation process. They are settling into the change of pace, but that’s not stopping Kiel from his training and preparation. Kiel is a triathlete.

Though relatively new to triathlons, Kiel had a prior love of swimming and running — cycling less so. After a cruise through Europe brought him and his wife to the ruins in Greece, he “felt a strong human connection to the timelessness of competition and athleticism” and decided that he would pick something and give it a try. 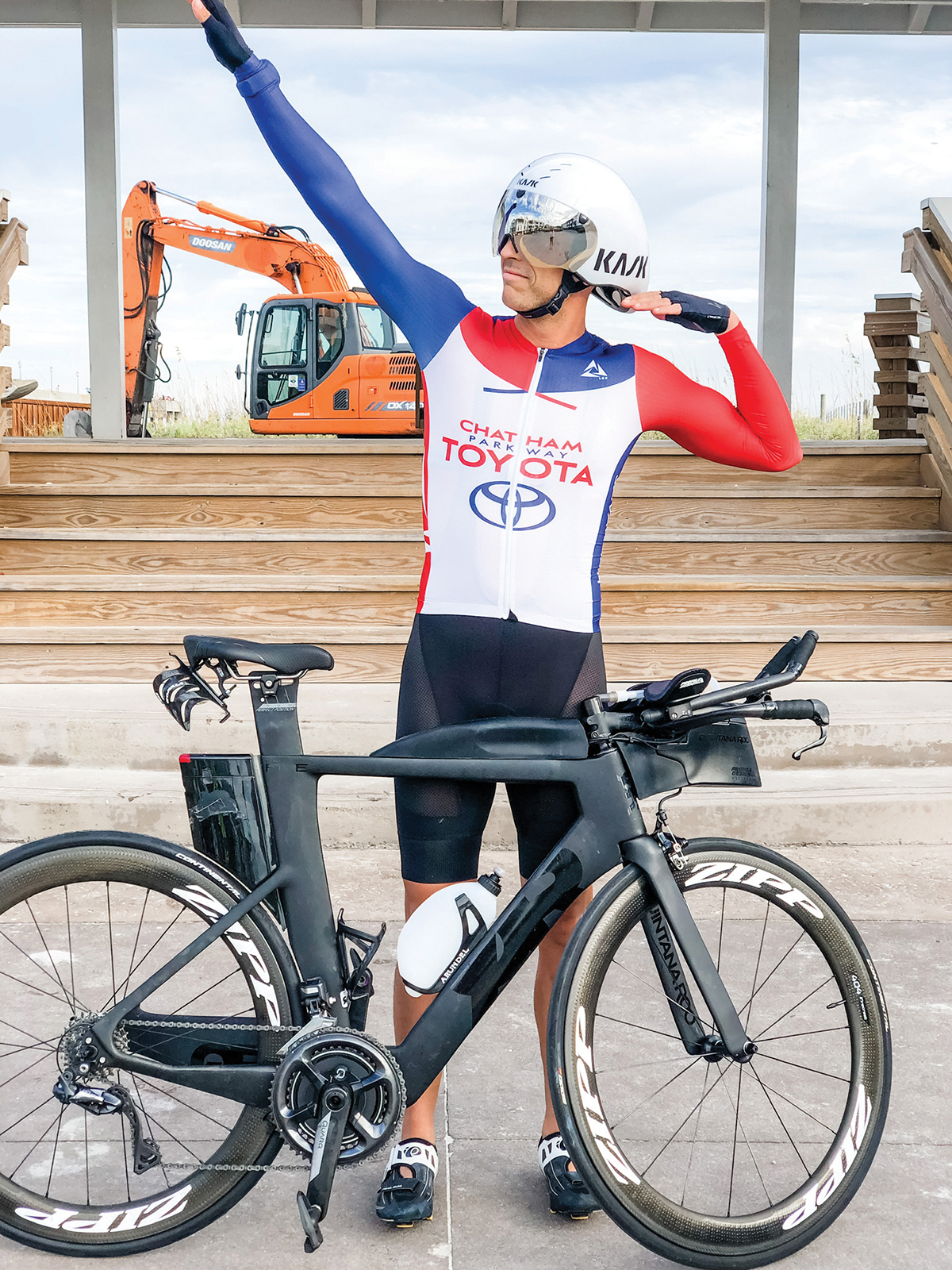 Staying loose and having fun before a ride with friends at the beach in Wilmington, NC.

Bur signed up for a half Ironman (70.3 miles) in December, 2019. His contention: “once you pay for it, you’re on the hook,” so he purchased a bike off of Craigslist and, as he recalls, “didn’t do especially well,” but that did not matter. He made it through, feeling, “this is hard, but it’s so much fun, and I want to see it through.” 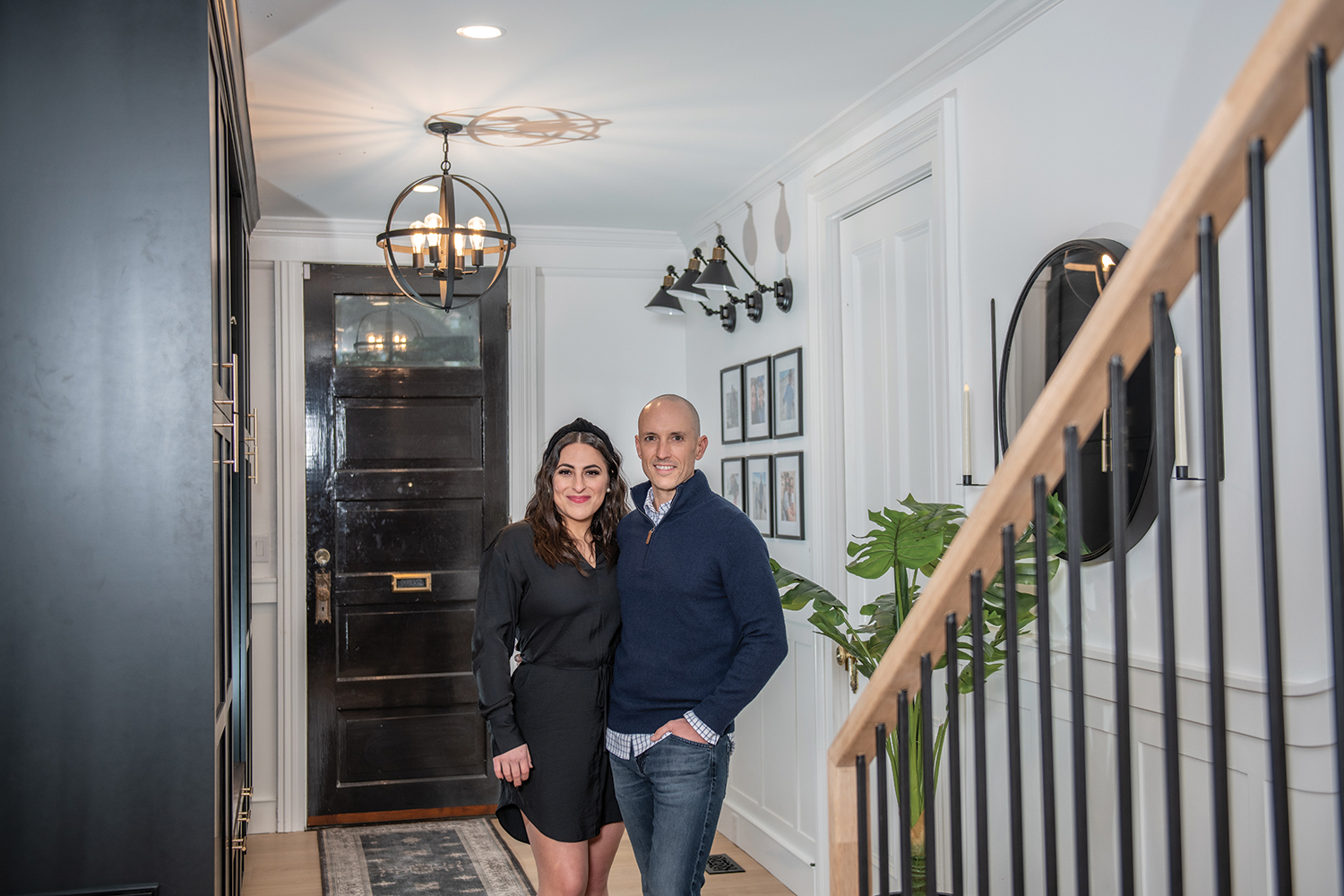 From new residents to ambassadors of the Hostess City of the South, Randi and Kiel Bur are eagerly awaiting their home renovations and offer their hospitality to those with a similar passion for triathlons.

In 2020, Bur decided to really look at his training and what he needed to do to succeed. He began reading about other people and what they did, looking at their blogs and training routines; learning from the endurance community. Despite the pandemic, he signed up for an event in Cozumel and trained like it was happening. As a part of the training, he subscribed to Strava, a social networking app for athletes. He took online educational classes to learn more about exercise and the body out of a desire “to know what was going on internally,” and during all of this, “fell in love with the process.”

For Bur, training is an integral part of his life. “It’s not about training hard for a few days, it’s about a little bit every day.” The “hero’s workout,” he says, “is a quick way to injury.” What might a day look like? Here’s an example: 6:00 a.m., pool followed by school drop-off; check emails, run; shower, finish meetings and any projects; bike, and then home.

This “sets the tone for the day.” It means that he is aware of meals, water intake, and sleep rhythms. If these things are not well rounded, the following day might look different based on what his body can handle. 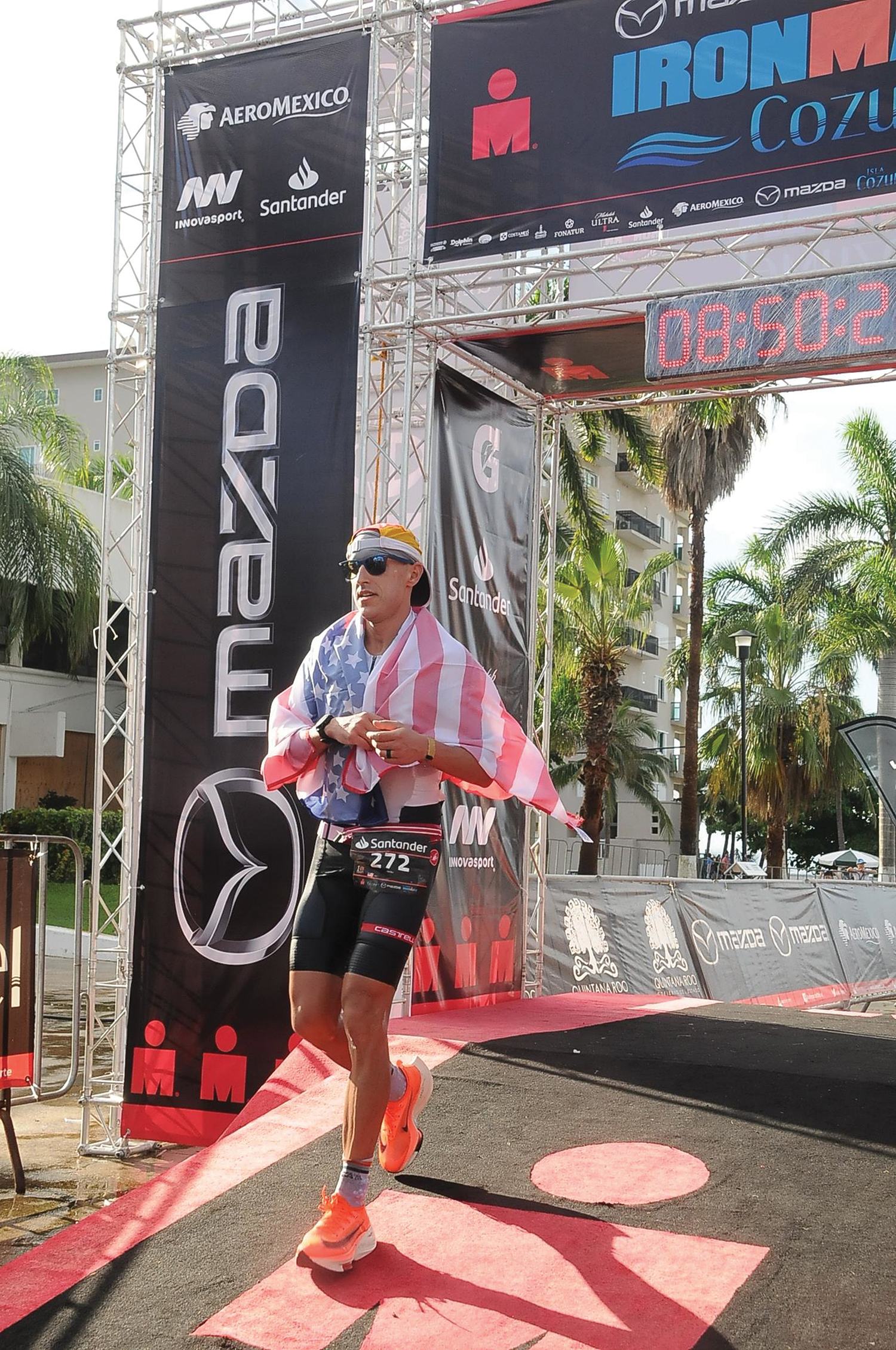 The blissful moment after crossing the finish line after his first full distance Ironman at Cozumel in November 2022.

Bur has competed in numerous places. He has won in his individual age group, and overall — even competing in the Kona World Championship. This year he and Randi are looking internationally, finding ways of turning travel into chances to compete as well. How’s this sounding? If you want to explore, or give it a try, here are some practical tips from Bur: Write down your goals. Find supports that will lift you up and not weigh you down. Be accountable to yourself. Be motivated by other people’s stories. For instance, Bur is inspired by David Goggins, a former Navy SEAL and triathlete, and often listens to others’ stories on Audible while on the indoor trainer. The process is fun. Not only is it about fitness and health, it’s a process of learning more about yourself and becoming more aware. Support systems are key. He credits his wife, Randi, as his primary support. “Don’t let the hard work dissuade you.” 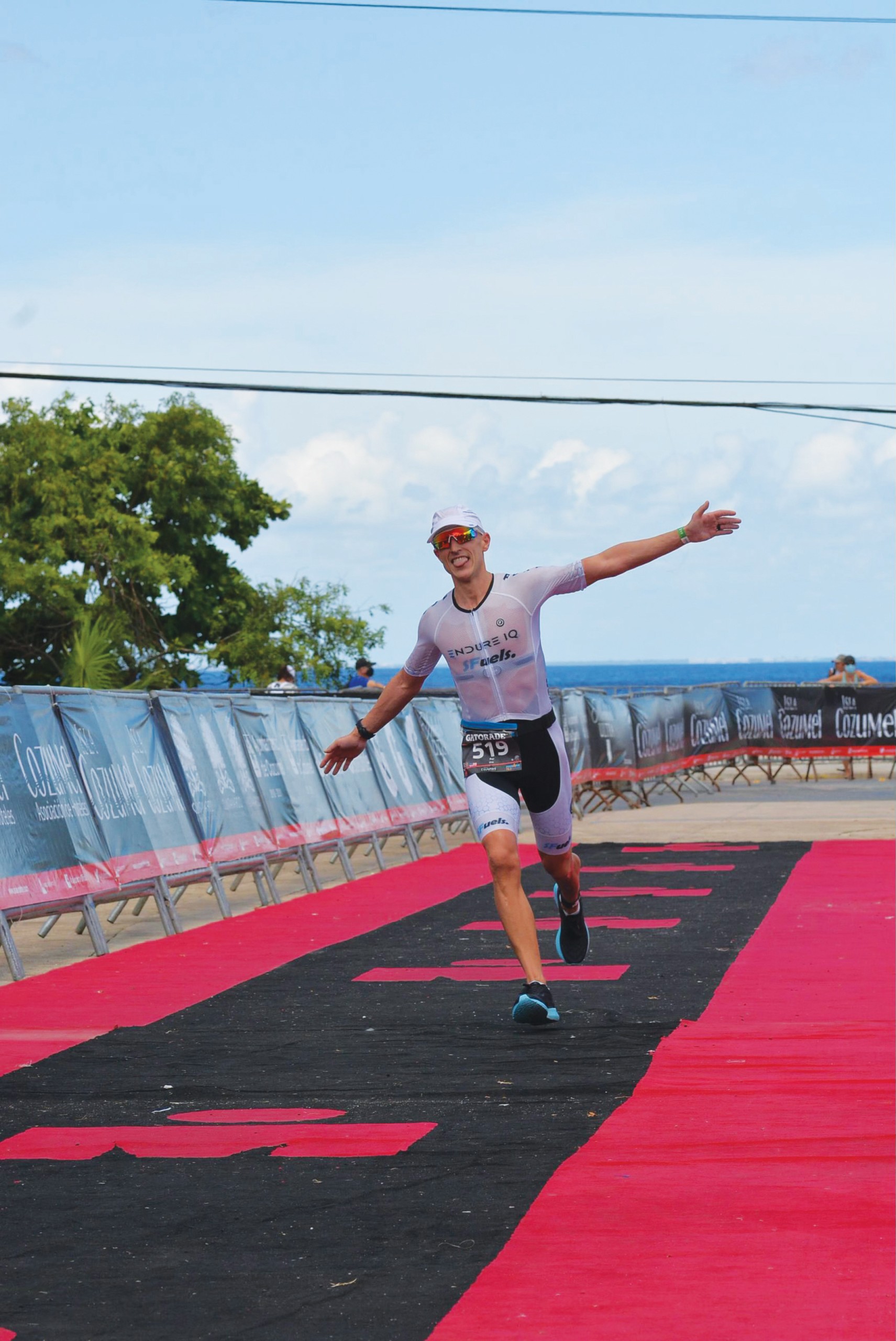 Bur hearing he won his age group right before crossing the finish line at his only race of 2020, Cozumel 70.3. Bur’s first overall race win and one of his proudest moments so far in the sport.

Currently, Bur is a member of the Every Man Jack team, founded by the CEO of Every Man Jack products, who is also a triathlete. This team is a team of amateurs, sprinkled all across the USA and Canada, with jobs, families, responsibilities, and a love of this adventure. Bur is adamant that this sport really is not a place for mean-spirited behavior, but a sport for people who want to push themselves, and support others in doing so, to achieve their goals. It is also a place to form friendships that are lasting. 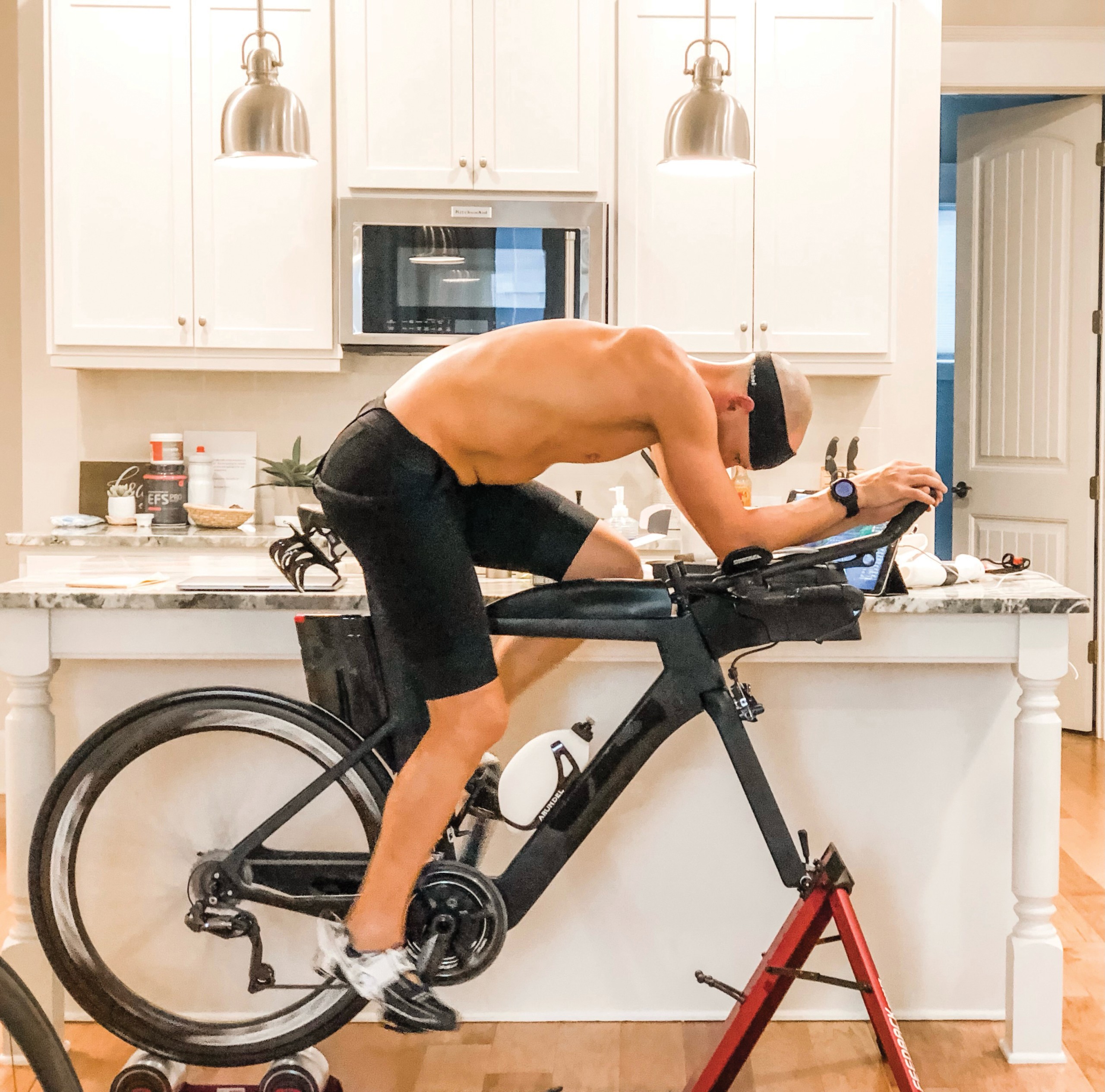 A quick 60 minute indoor spin to wake up Bur’s legs after traveling from Savannah to Wilmington for North Carolina 70.3 in 2022.

Recently, at the 250th anniversary of the Olde Pink House, the Bur’s met Chatham resident Susan Reese who serves as the volunteer coordinator for local Ironman and Rock ‘n’ Roll Marathon events. If you still find yourself intrigued but unsure, consider volunteering and getting your toes wet. Volunteering is crucial to the safety of those on-course, and a good way to meet others in the community.

The Burs are looking forward to the day when their home renovations are complete, and the carriage house opened as an Airbnb. They will market it to those who are not only interested in visiting Savannah, but who are also interested in the world of triathlons and being a triathlete — returning the welcome they received as some of the city’s newest ambassadors. 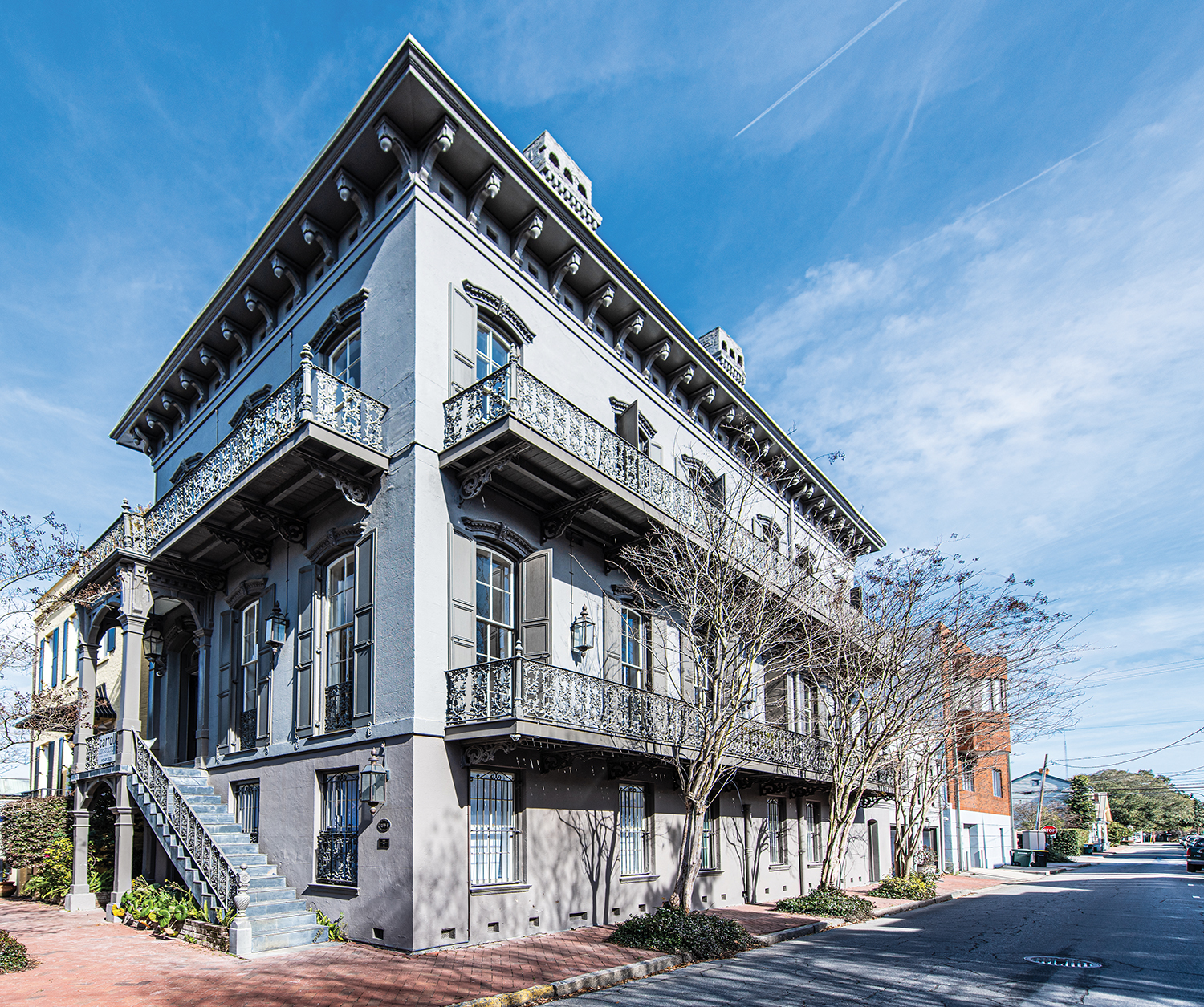 Sold to the Bur’s in 2021 by Seabolt Real Estate’s Shannan Hunt, this 5,496 sqft Historic Italianate mansion is one of Savannah’s most celebrated. Awarded the 2016 Historic Savannah Preservation Award, when William Kehoe married in 1868, this was his family’s first home, located on Columbia Square.