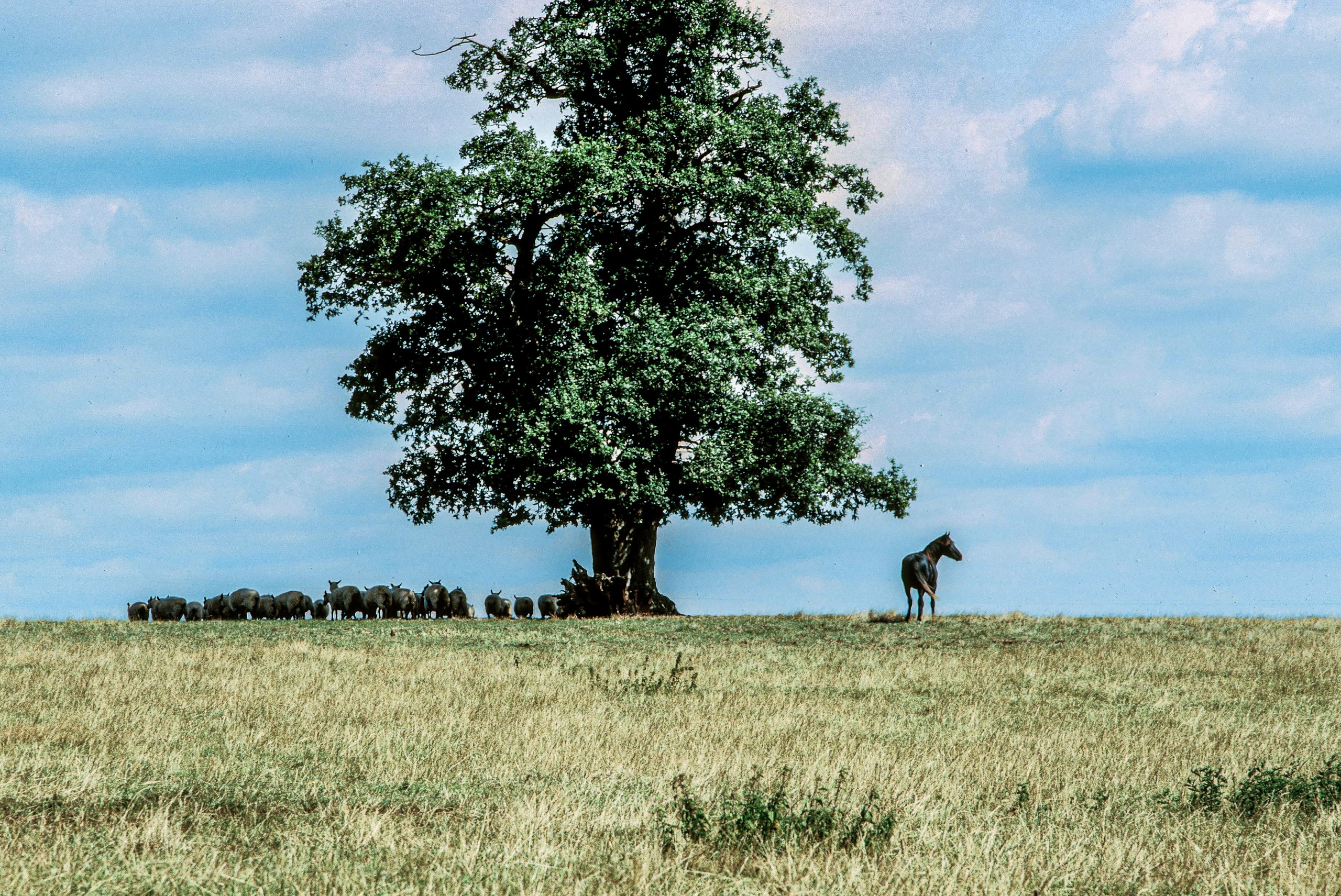 photo: d. paul graham, look away from the herd, Surrey England, circa 1994

Each January as I organize and prepare my photography workflow to start another year, I take some time to look at some of the images I have taken over the years. This last week I came across one of my Kodachrome images taken in England in the 90’s. During my first visit to Surrey, I would walk each morning through the local fields. One morning I came across a herd of sheep under a lone tree, and a single horse. The sheep were bunched together under the tree; the horse separate from the lamb chops and looking in the other direction. The image spoke to me of the need that we all have at times in our lives to be ourselves, not matter what the herd is doing, to move away from safe places and to look in the other direction because you’ll never know what a fresh perspective will bring to you. It epitomizes the thought of two types of people: those that stay with the herd, wanting to fit in by looking like the herd and those that are most comfortable breaking way from the herd and wanting to have their own look. As such, this morning’s M5T looks at Two Kinds of people in our lives.

Those that continue to get up no matter how many times they fall or those that stay in the valley their whole life.

Those that are strong in their convictions and beliefs and those who don’t really know what or why they believe.

Those who talk about problems or those that find solutions.

Those who believe there are two kinds of people in the world or those who don’t.

Those that use a bookmark or those that fold page corners.

Those that read books or those that watch YouTube.

Those that make their bed every morning or those that don’t. Until they wash their sheets.

Those whose Inbox has not been emptied since 1985 or those that are ocd about emptying their inbox every hour.

Those that prefer to text or those that only make phone calls.

Those who walk into a social event and say, “There you are!” and those who say, “I’m here.”

Those who lift you up or those who drag down.

Those who you like to have a drink with or those that drive you to want to drink.

Those who follow the rules or those who make the rules.

Those that outwardly celebrate your success or those that inwardly despise your victory.

Those who use their finest china and crystal all the time or those that never blow the dust off the good stuff.

Those that have spotless car interiors or those who use their car as an extension of a closet.

Those who know what heel-toe really means and those that think it’s a Tic-Tok dance move.

Those that know how to drive a stick and those that would otherwise have to call an Uber.

Those that will give you the shirt off their backs if needed and those that you check your wallet when they leave the room.

Those who last and win over the long-run or those who lose by fading and burning out fast.

Those who iron or those that keep drycleaners in business.

Those who wear pajamas or those who are starkers that sleep butt nekkid.

Those who can dance or those that do an incredible Elaine Benis impersonation.

But wait there’s more!  One bonus “Thing” for today’s M5T. There are three people in life when it comes to mathematics. Those that get math and those that don’t.

Here’s to a week of breaking away from the herd and celebrating you and your kind.

For over 10 years, D. Paul Graham has published “Monday 5 Things” ™, also known to readers as M5T ™. Each Monday, Paul shares his observations, thoughts and passions on people, life, and culture.