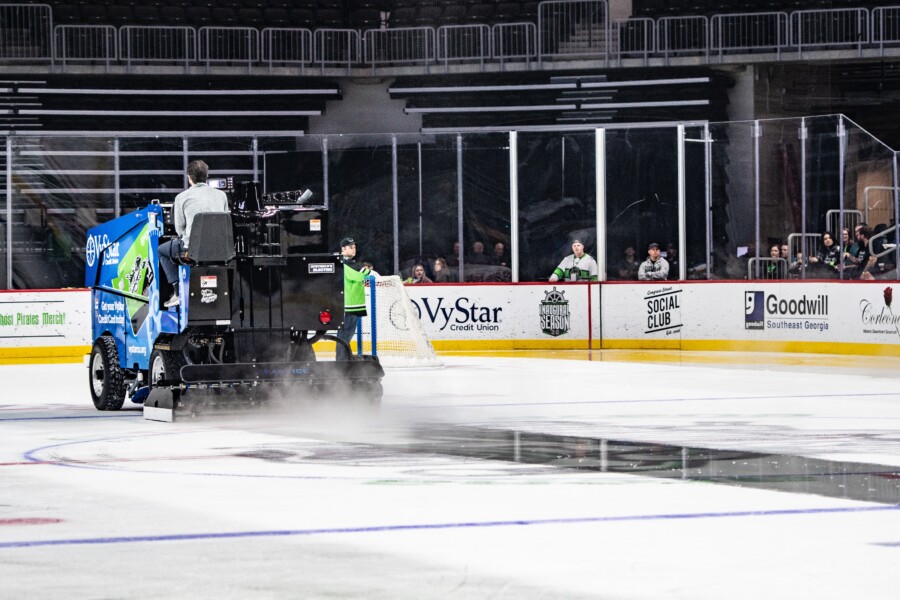 I had the opportunity last week to photograph the Savannah Ghost Pirates. Our ECHL team put a whooping on the division leaders Florida Everblades (not a typo) with an 8-2 W. In between the 2nd and 3rd periods I talked with a father and his 10-year-old son who were at their first ever hockey game. We discussed some of the finer points of the game; face-offs, icing, being off-side, hip checks, neutral zones, and slap shots – both the shot and the movie.  In retrospect, I perhaps shouldn’t have mentioned the movie to a 10-year-old. Being back around a rink did this transplanted Canadian’s heart (that continues to be broken every year by the Toronto Maple Leafs) good to see how Savannah has embraced this sport of chasing a frozen black disc up and down the ice. Hockey has seen many changes since I played as a kid. However, one constant is the venerable Zamboni that cleans the ice between periods. Well, Savannah has made a few changes – one Zamboni was modified to look like a tourist bus that is ubiquitous to Savannah; another looked like a Publix shopping cart (that propelled shirts into the crowd); and there was even a mini-Zamboni that Davy, the team mascot, pulled a kid around the ice. This morning, M5T provides an homage to the venerable Zamboni that all rink-rats dream of driving. And if you are in Savannah and haven’t seen a Ghost Pirate game yet, I highly recommend it. It was some great hockey.

The Zamboni made its debut in 1949 when inventor, Frank Zamboni, started production of his patented “ice resurfacing machine”, ironically in Paramount California. Since then, over 10,000 Zamboni’s have been sold around the world.

Suddenly realizing the ice resurfacing was limited in California, Zamboni opened a Canadian factory in 1967, in Brantford Ontario, the home of another Great One named Gretzky. Coincidence? I think not. In 2001 a Zamboni was driven across Canada from St. John’s Newfoundland to Victoria B.C. Tens of people lined the highway to watch the event. At a staggering 9 miles per hour, the trip took almost 4 months, and the Trans-Canada Highway has never been cleaner.

The instantly recognized shape is actually trademarked. There is an award for the Zamboni driver of the year. Road and Track Magazine did a road test revealing a top speed of 9.7 mph, and zero to 60 in 93.5 seconds. No word if this was on ice.

Back in Canada, one of McDonald’s most popular Happy Meal toys has been a model Zamboni. In Fargo North Dakota, the first Zamboni DUI charge was made in 1995, against the driver who “appeared to be drunk while hitting the boards as he cleaned the ice”, according to the arrest report.

My in-depth research begged the question, ‘how was ice cleaned in rinks before the Zamboni’?  You may recall Second City TV’s “Great White North” Canadian duo, Doug and Bob Mackenzie, and their phrase “Hosers”. In the north, a lot of hockey was played on outside rinks in bone chilling cold weather. Legend has it that the losers of a hockey game had to stay and “hose” down the ice after the game so there was a good playing surface for the next game. Hence, “hosers” were losers, eh.

As the frenzy to get to Christmas begins, here’s to a week of staying cool and for clean playing surfaces in whatever you do and wherever you go.

M5T is now online on South Magazine… Read it here…..

For 11 years, D. Paul Graham has published “Monday 5 Things” ™, also known to readers as M5T ™.  Each Monday, Paul shares his observations, thoughts and passions on people, life, and culture.