What has three legs, fluffy, snow-white fur and a heart of gold? That’s Gunner, face of the SD Gunner Fund, based in Savannah, Georgia. 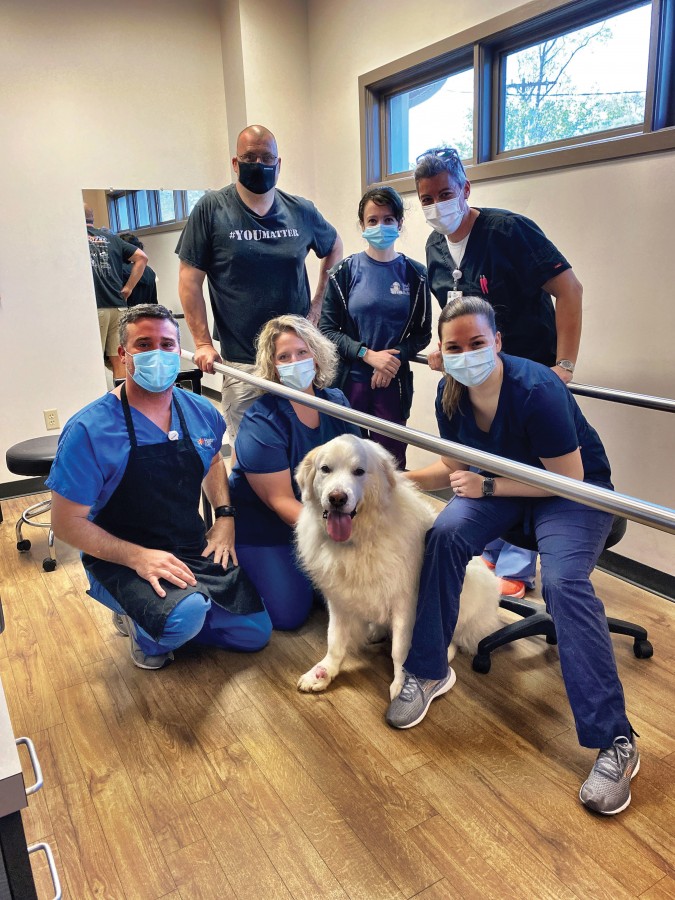 What has three legs, fluffy, snow-white fur and a heart of gold? That’s Gunner, face of the SD Gunner Fund, based in Savannah, Georgia. After a surprise diagnosis left Gunner with one less paw, the community rallied around this service dog who has touched the hearts of many and has been featured on the “Today Show”, “NBC”, “Fox News” and in People Magazine to name a few.

Known throughout the Savannah community and beyond as the face of the SD Gunner Fund, Gunner, an eight-year-old Great Pyranese, works as a service dog for U.S. Army veteran Sgt. Hamilton Kinard and his family. The SD Gunner Fund’s mission is to assist military veterans and children with exceptional needs with the financial expense of owning much needed service and therapy animals. Gunner is one such trained service animal and on January 8, 2021, his life changed forever when he developed a soft tissue sarcoma on his front paw, seemingly overnight.

Gunner’s owner and founder and president of the SD Gunner Fund Britnee Kinard described how the mass doubled in size in the time they waited for an appointment with an expert at the University of Georgia College of Veterinary Medicine, where they received a devastating verdict. Kinard said, “They basically told us that chemo was not an option because it would make his nails and pads fall off, and it would be really painful. Surgery was not an option because they could not guarantee that they would get all of the cancer,” she continued. “I’m assuming they didn’t know us and didn’t know how much we love Gunner, because they told us that due to his age and size it would just be best to put him down. And I said, ‘Well, that does not work for me.’”

In an attempt to find another solution, Kinard put out an APB on Facebook, and the phone calls soon came rolling in. She was contacted by renowned veterinarians across the country, but despite many experts coming to the similar conclusion that Gunner’s foot would need to be amputated, no one had performed surgery on a dog as large as Gunner, or they did not have the equipment to do so.

So, Kinard circled back to their trusted family veterinarian Dr. Jeremy Faris at Port City Animal Hospital, who had advocated for Gunner every step of the way. “We went back to consult with Dr. Faris, who said that although he hadn’t done a surgery like that before, he would learn. So he started studying and reaching out to his collegiate mentors and eventually teamed up with the University of Florida, and they helped guide him through the surgery.” 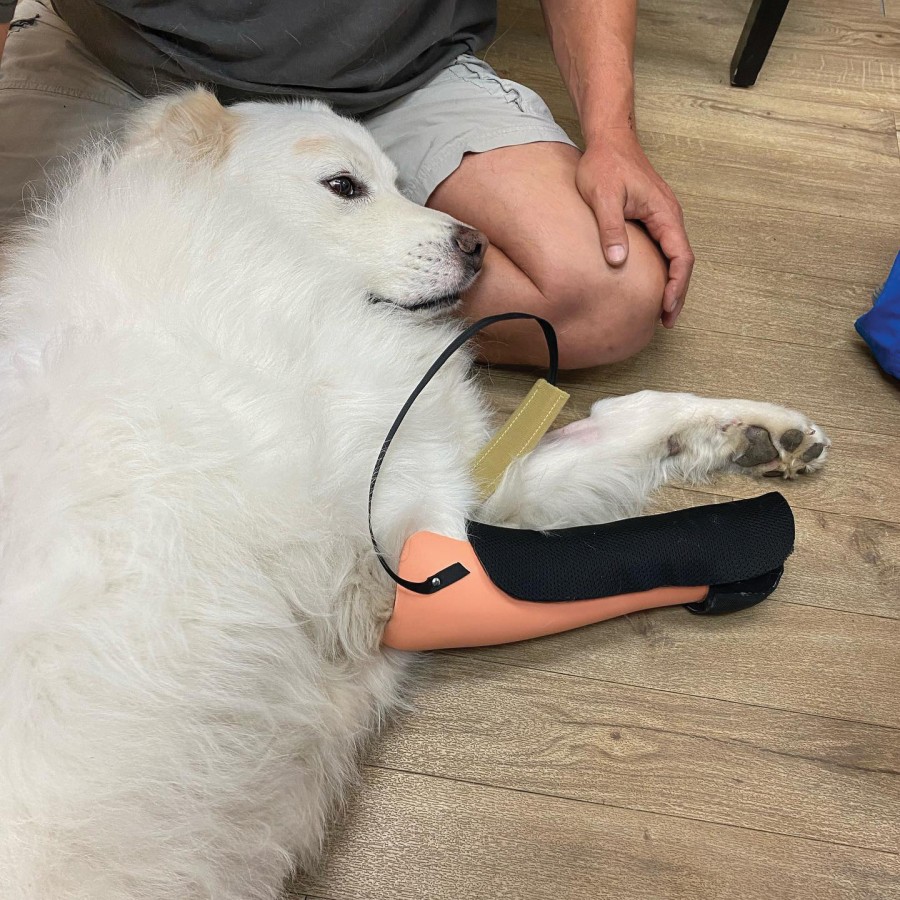 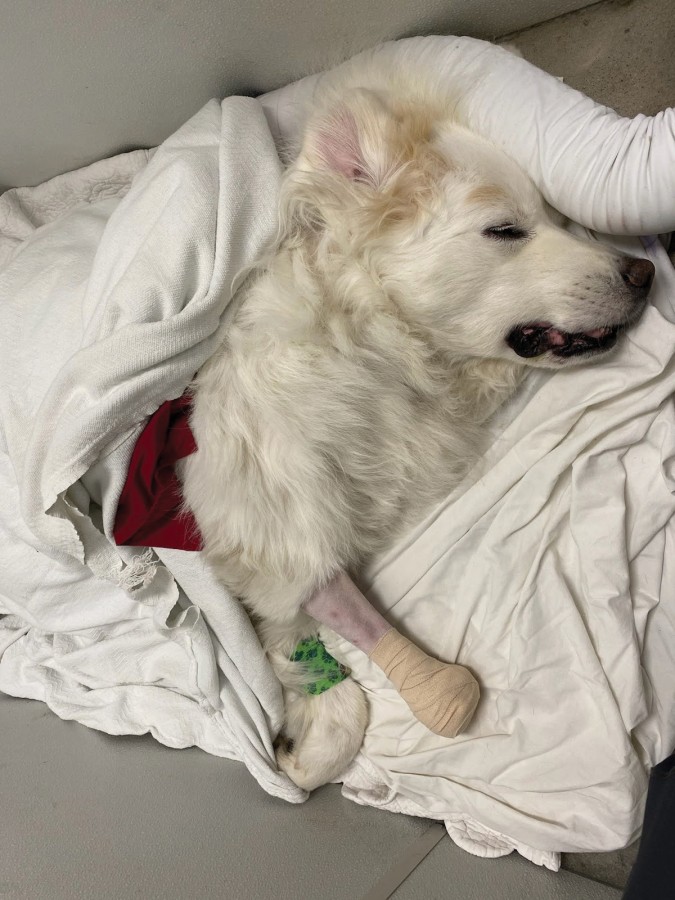 The amazing veterinary team at Port City Animal Hospital with Dr. Jeremy Faris, did the amputation on Gunner’s right carpus on April 12, 2021. His foot had to be removed because the cancer could not successfully be treated with radiation due to the location on his leg.

Kinard explained, “We chose amputation because after we had taken him back to Jeremy, we had multiple tests done. We had everything x-rayed and confirmed that [the cancer] had not spread and that Gunner was really healthy otherwise. It was just a really crappy location for a tumor.”

Dr. Faris performed a successful surgery on April 12, removing Gunner’s front paw. Since then, Gunner has had some ups and downs on the road to recovery due to his exceptional size, needing three additional surgeries to correct ripped stitches and infection.

“It has kind of been a learning curve for everybody involved, but the community has been great. They’ve been like, ‘We’re going to figure this out, we’re going to step up and do the research and make this happen.’ That’s been a blessing more than I could have ever imagined,” said Kinard.

Gunner has been a star patient at Fetch Canine Rehab, working on building strength and mobility post-surgery. Jeremy Counihan, lead certified prosthetist and orthotist at Hanger Clinic in Savannah, has been working on Gunner’s prosthetic. Although Hanger Clinic typically creates prosthetics for humans, they’ve made an exception to help Gunner.

Kinard said, “We’re excited for him to be ready for the prosthetic, because he’s been trying to use his leg a lot. So, when he finally gets the prosthetic I think it’s going to come very naturally.”

Just as Gunner has been there for his community year in and year out, the Savannah community — and people around the country — have rallied behind Gunner to help him soldier through his battle with cancer. Already, Britnee Kinard sees Gunner making new connections with other human amputees and cancer patients, who can now relate to each other on a deeper level. Gunner is a special, one-of-a-kind dog who has amassed a talented team of doctors, veterinarians, therapists, prosthetists and more, showcasing the outstanding animal-friendly community in Savannah.  Visit sdgunner.org for more.