The coastal south has been a destination of choice for those moving from big cities or moving away from heated political climates. Don McGraw is one such man. But when he made the decision to move, he also put his money where his heart was; In the restaurant business. When McGraw takes on a project, he’s all in. So when he moved to Tybee Island, Ga., and opened up Coco’s Sunset Grille, it only made sense that he needed his own shrimp boat. as luck would have it, one of the region’s greatest shrimp boats was prime for new ownership. 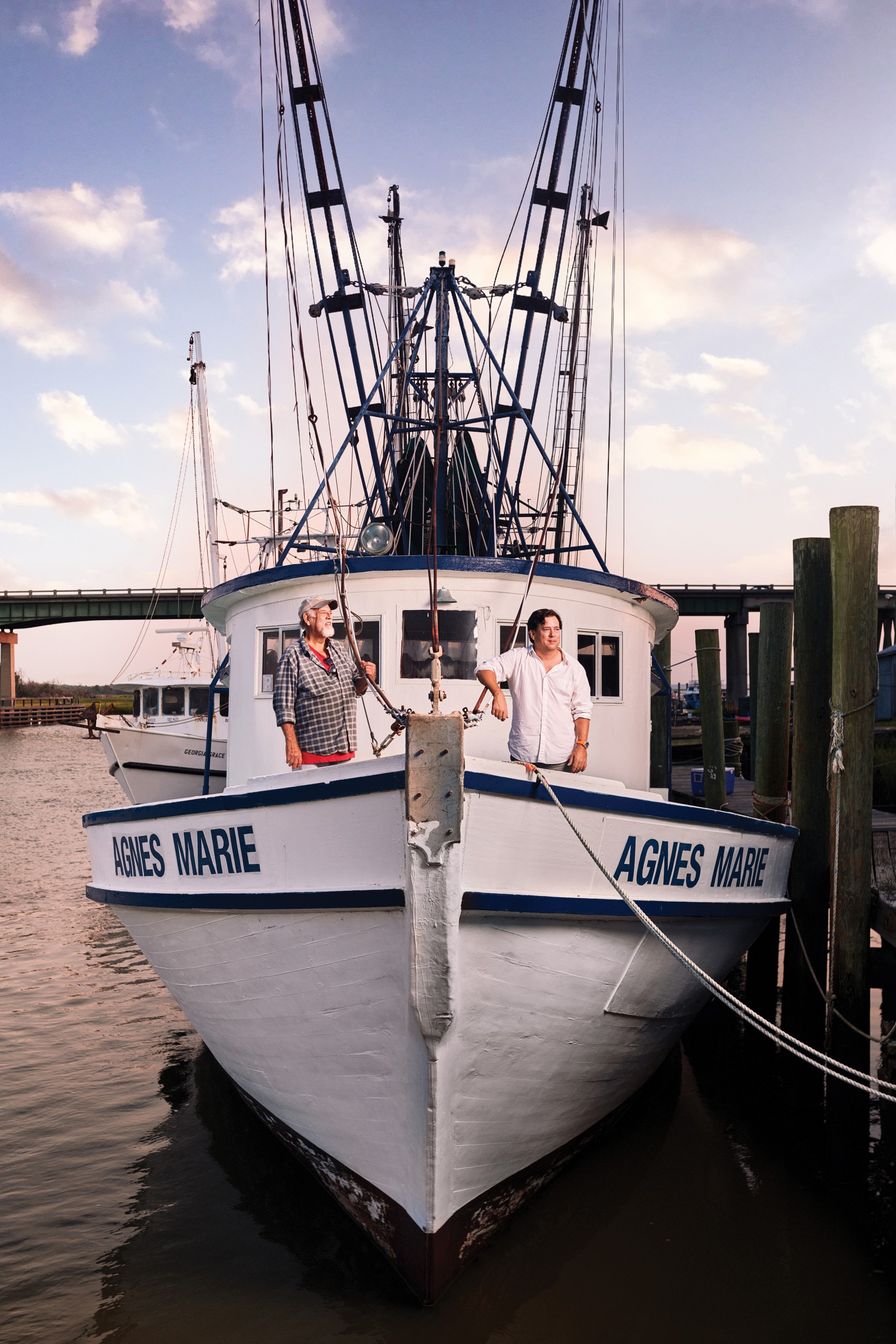 Captain J.B. Ripple hands the reigns of ownership of the famed Agnes Marie to its new owner, Don McGraw. For over 40 years the Agnes Marie has been a familiar sight off the shores of Tybee Island. Photo / Blake Crosby

The coastal south has been a destination of choice for those moving from big cities or moving away from heated political climates. Don McGraw is one such man. But when he made the decision to move, he also put his money where his heart was; In the restaurant business. When McGraw takes on a project, he’s all in. So when he moved to Tybee Island, Ga., and opened up Coco’s Sunset Grille, it only made sense that he needed his own shrimp boat. as luck would have it, one of the region’s greatest shrimp boats was prime for new ownership.

Little did Don McGraw know that his initial visit to Tybee Island more than 20 years ago would set the stage for a major life change for him and his wife Stephanie, two of the newest restaurateurs on Tybee Island.

While most people see the pandemic as a negative, Don and Stephanie McGraw saw it as an opportunity. “I was working in finance and Stephanie was teaching when COVID-19 happened in 2020,” said McGraw. “We had visited Savannah many times over the years and Tybee Island in particular.” With all the uncertainty caused by the pandemic, the McGraws were looking for a different pace of life, so they took a leap of faith and moved from New York to Tybee in November of 2020. 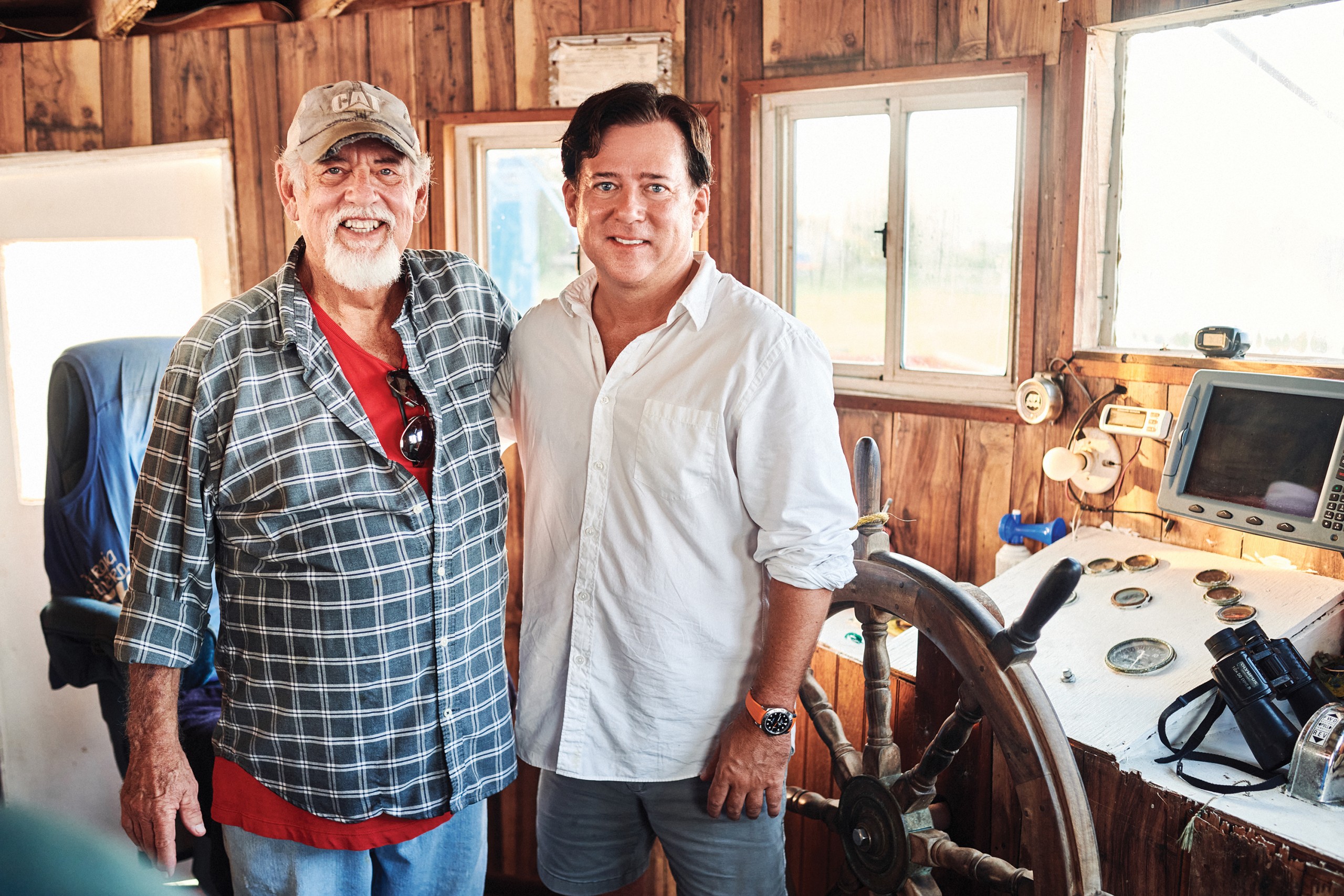 Retiring Agnes Marie Captain and owner J.B. Ripple grew up on a 500-acre farm in “the middle of nowhere” before he came to Tybee in 1970.

With barkeeping and owning a restaurant part of Don McGraw’s past work experience, the duo decided to investigate the concept of owning a restaurant on the easternmost point of Georgia. Based on research and a few interesting conversations, it was decided Telfair Capital — one of McGraw’s LLCs — in partnership with N.Y. based Bruderman Brothers, would acquire CoCo’s Sunset Grille, Captain Mike’s Dolphin Tours and the famous shrimp boat Agnes Marie, to create not just a business but a destination experience.

The seed for this original line up was planted when McGraw was at the docks buying shrimp and he ran into J.B. Ripple, the owner of the Agnes Marie shrimp boat. “J.B. was basically telling me that he wasn’t going to renew his lease on the dock, and that he was going to sell the shrimp boat, “ said McGraw. As somebody who grew up as a young man going to Tybee and seeing the shrimp boats under the Lazaretto Creek Bridge, that was something McGraw felt he had to preserve.

Ripple invited McGraw to come on a tour of the Agnes Marie. “Actually stepping foot on a shrimp boat is a really kind of exhilarating experience with the riggings and the element of adventure, and the hairs in the back of my neck kind of stood straight up, just because it was something that’s so unique and so special,” said McGraw. “I wanted to make sure that other people could potentially have that opportunity.”

However, just owning a shrimp boat was not enough for the McGraws. “Our big idea was that we could basically create a ‘vertical’ that started with a shrimp boat, ended with dinner at CoCo’s, and involved everything in between. Then we would have something that’s pretty special, not just a place to eat but a total experience,” said McGraw. “I don’t know of any restaurant where you can look out the window and see the shrimp boat that just caught your dinner!”

While the intention is to preserve the three businesses as they currently are on Tybee Island, the McGraws are in the process of expanding into Savannah by creating another CoCo’s on River Street. “We are really excited as Savannah has one of the fastest growing markets in Georgia,” explained McGraw. “We hope to open this new location by October and then look at Richmond Hill or Pooler for the next one.” The McGraws are moving very carefully, however, to ensure that all the elements of CoCo’s that make it successful are accurately duplicated on the new premises.

McGraw is very thankful for the open-armed welcome that they have received from Tybee Island residents. “When Stephanie and I moved down, I was a little nervous because I only knew a handful of people in Savannah and we didn’t really know anyone when we first got here, which can be a bit scary,” said McGraw. However, the entire community has taken the McGraws under their wing. “I’ve been really sort of humbled by how the community has really embraced us, and part of that is they understand we share their vision of continuity and keeping things as they are; preserving them for the next generation,” he said.

As if moving across the country and starting a new business in Tybee and then expanding into Savannah was not enough change, the McGraws are also set to become first-time parents in February of 2022. “Stephanie has stepped away from teaching and we are fortunate that she can be a full-time mom. It’s exciting to be raising a family down here as opposed to one of the bigger cities that we’ve lived in previously like Houston or New York. This is just such a gorgeous part of the country, and this is very exciting for us to be launching this unique business while we wait for our daughter to arrive.” • 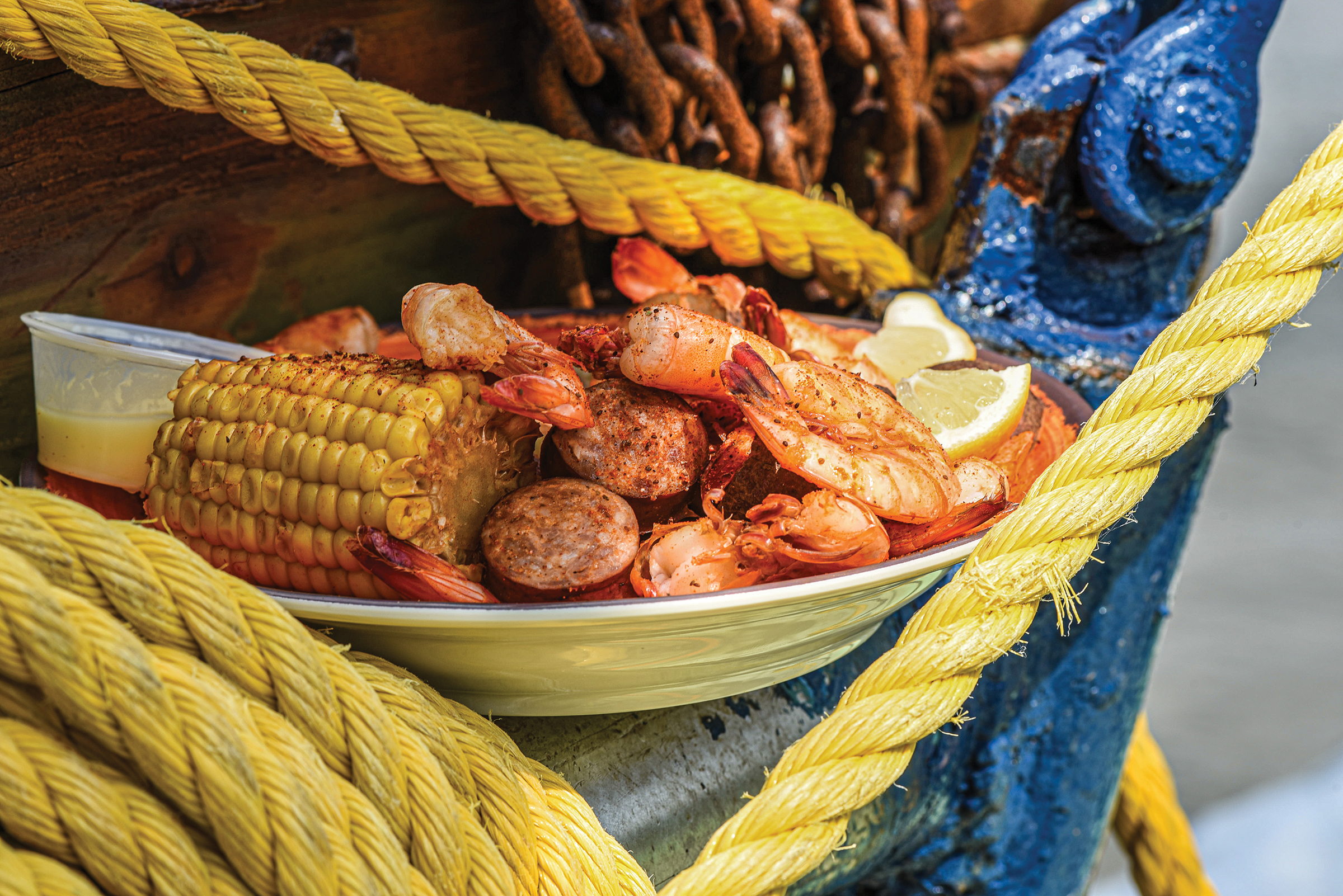 Check out these Hot Spots

A Piece of History

The Agnes Marie was christened in 1978 and is one of the last surviving wooden shrimp boats in the United States. Her original captain, William Glenn Smith (W.G.) named her for his wife and daughter. Built in Shallotte, N.C., J.B. Ripple was there when the Agnes Marie first went in the water and it hasn’t shrimped a day without him since. When it came time to retire from shrimping, W.G. sold the Agnes Marie to Ripple with a promise to let W.G. work on her until he died. Ripple, as the new captain kept that promise, and was there when W.G. quietly released the wheel and slumped to the floor and was carried off the boat the morning of Veterans Day 2006.

Ripple felt the same as W.G. and was “going to fish till they carried me off the boat.” But the boat was killing Ripple between crew and health issues. In late July, Ripple fell off the ladder at the back of the boat and had to be hauled off on a stretcher. True to his word, Ripple decided that since he was carried off the boat on a stretcher then he “didn’t have to die on the boat,” and made the decision to retire.

For over 40 years the Agnes Marie has been a familiar sight off the shores of Tybee Island. And after 40 years of shrimping, it was Don McGraw’s passion for Tybee and for preserving the past that convinced Ripple to sell him the Agnes Marie.

“I remember when I took one of my friends from New York, who was pretty cynical and jaded, on a tour of the Agnes Marie and you should have seen the look on his face! It makes you feel like you’ve stepped into a time machine, and we want to preserve that legacy. Our plan is to keep things pretty much as they are, and we want that visual you get when you come over the bridge to remain intact for our children,” said McGraw.

While the boat is currently moored outside CoCo’s Sunset Grille waiting on paperwork finalization, McGraw has some interesting plans for the future that include much more than just catching shrimp.

McGraw wants to create educational opportunities for children to experience that same feeling as if they are stepping back in time. McGraw is working with the Tybee Marine Center to create some educational experiences such as inviting various Scout groups aboard so that they can understand the history of shrimping by going on a special tour of one of the last wooden shrimp boats in the United States. “We are determined to preserve this little piece of history.” 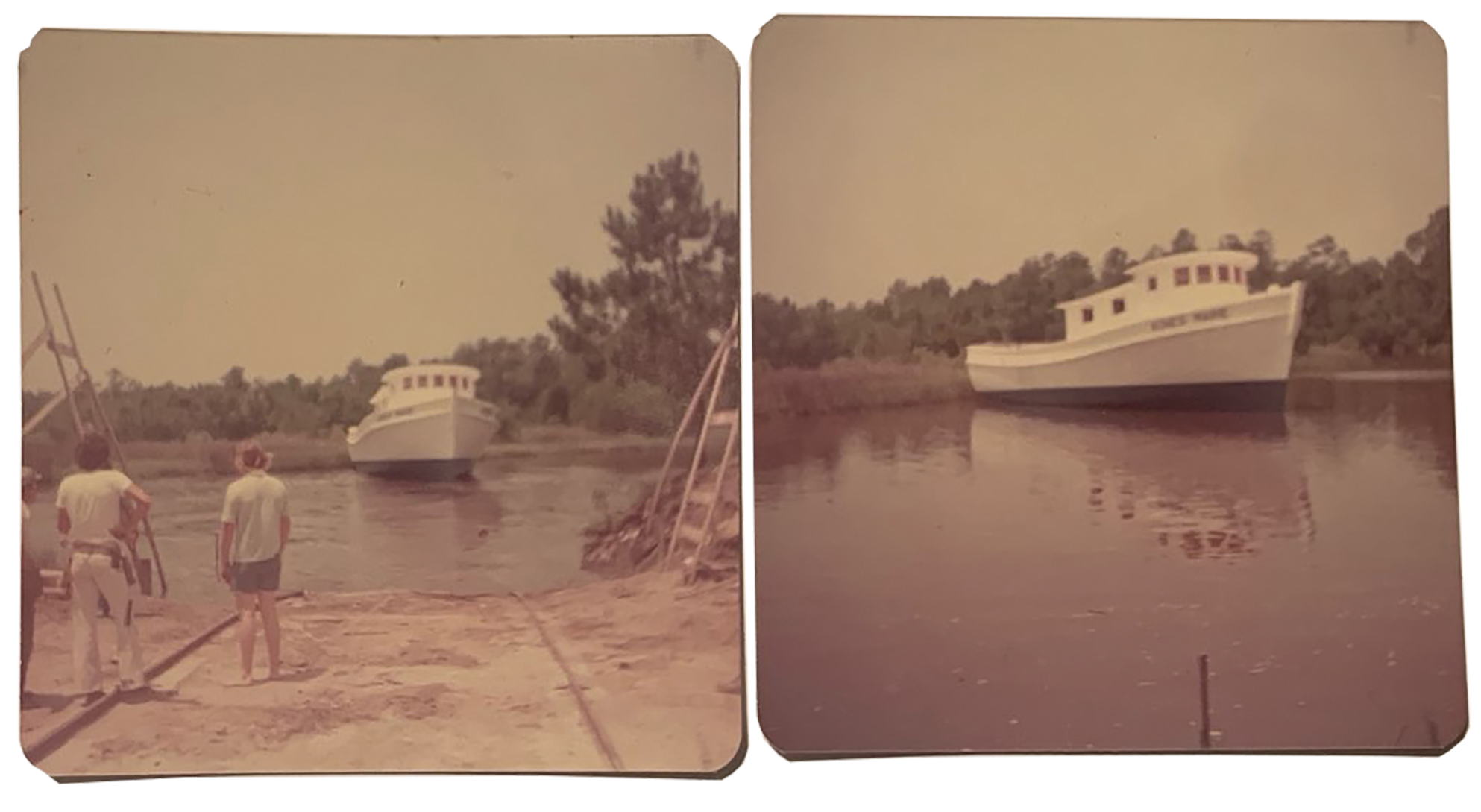 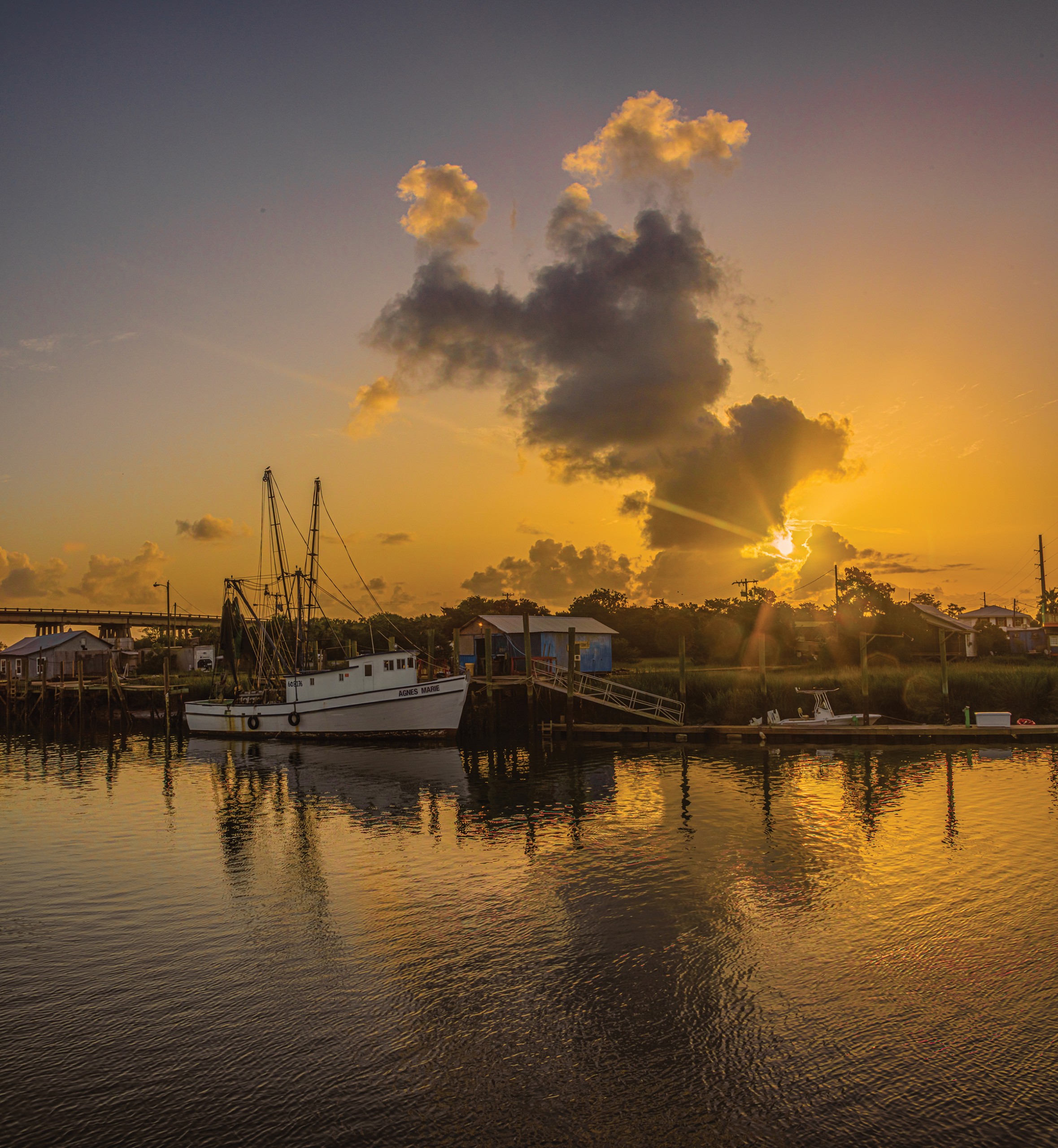 The Agnes Maries at home at the docks in Tybee Island. Photo / Miranda Osborn