To this organization, “heroes” not only refers to heroes in the military, but to heroes here at home, too. Every time an animal in need is paired with a hero, two lives are saved. 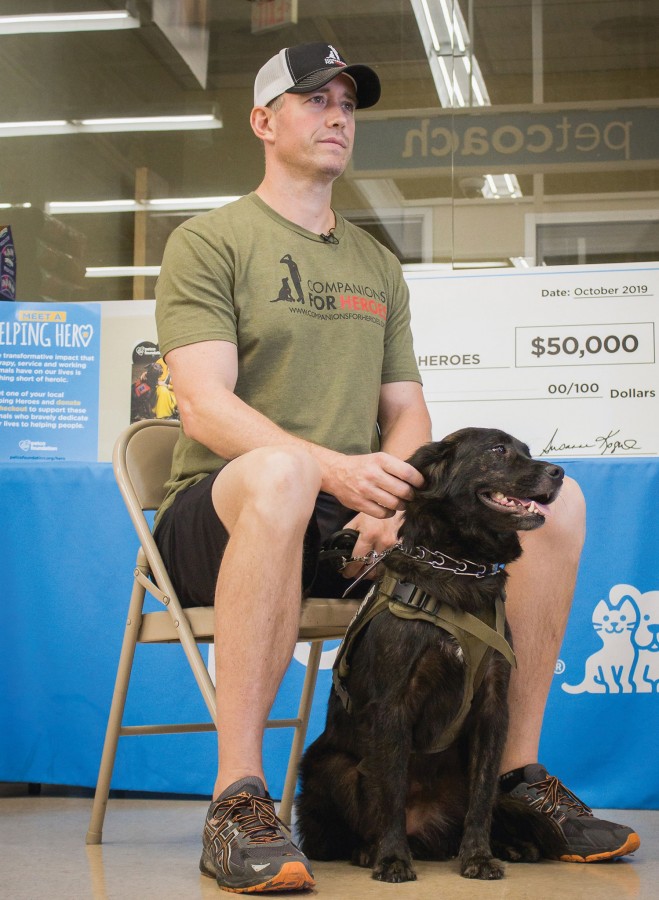 David Sharpe, founder of Companions for Heroes and U.S. Air Force veteran, was prompted to start his organization after his own near-death experience with PTSD. He described the day he nearly took his life to end his suffering. His dog at the time, Cheyenne, had been helping him cope with depression when she did something extraordinary. Sharpe said, “Cheyenne literally walked in and licked my check when I had the barrel in my mouth. She saved my life.”

Since then, Companions for Heroes has saved “1,400 heroes and dogs nationwide,” according to Sharpe. Their mission is “To champion public awareness of PTSD and challenges confronting our country’s heroes and rally support for shelter animal adoption by connecting heroes and companions.”

Sharpe recalled one of the first veterans the organization was able to pair with a dog. The veteran, who had been shot in Iraq, was reserved and quiet; he had a leg cast and used a cane to get around. When he went into the room to meet the shelter dogs, one lively terrier puppy bounded straight to him, also wearing a cast on her rear leg. The veteran and the terrier were inseparable ever since. In the following months, the recipient reported that his family, including his eight-year-old-daughter, noticed he was smiling again.

Companions for Heroes has come a long way and now operates through shelter partnerships nationwide. The organization has also expanded its focus group to include all heroes, from active military, veterans, first responders, to medical professionals and more. As the U.S. begins to call military members home, Companions for Heroes continues to grow. “The new focus should be on those who step up in our everyday lives helping our families at home. We’re very excited to apply our services to them, because they deserve it as well. They made many sacrifices during COVID-19, we want to help them,” Sharpe said.

Visit Companions for Heroes at companionsforheroes.org to learn more.

Susie Abromeit: In Bloom & On a Roll