What Make the Athletes of Cheer Savannah More Than a Cheerleader

The talented young women of Cheer Savannah are on top of the world as they are currently ranked among the top 10 teams in their sport and being world class doesn’t come easy. Meet mother hen, Stephanie Britt and her team of amazing athletes. 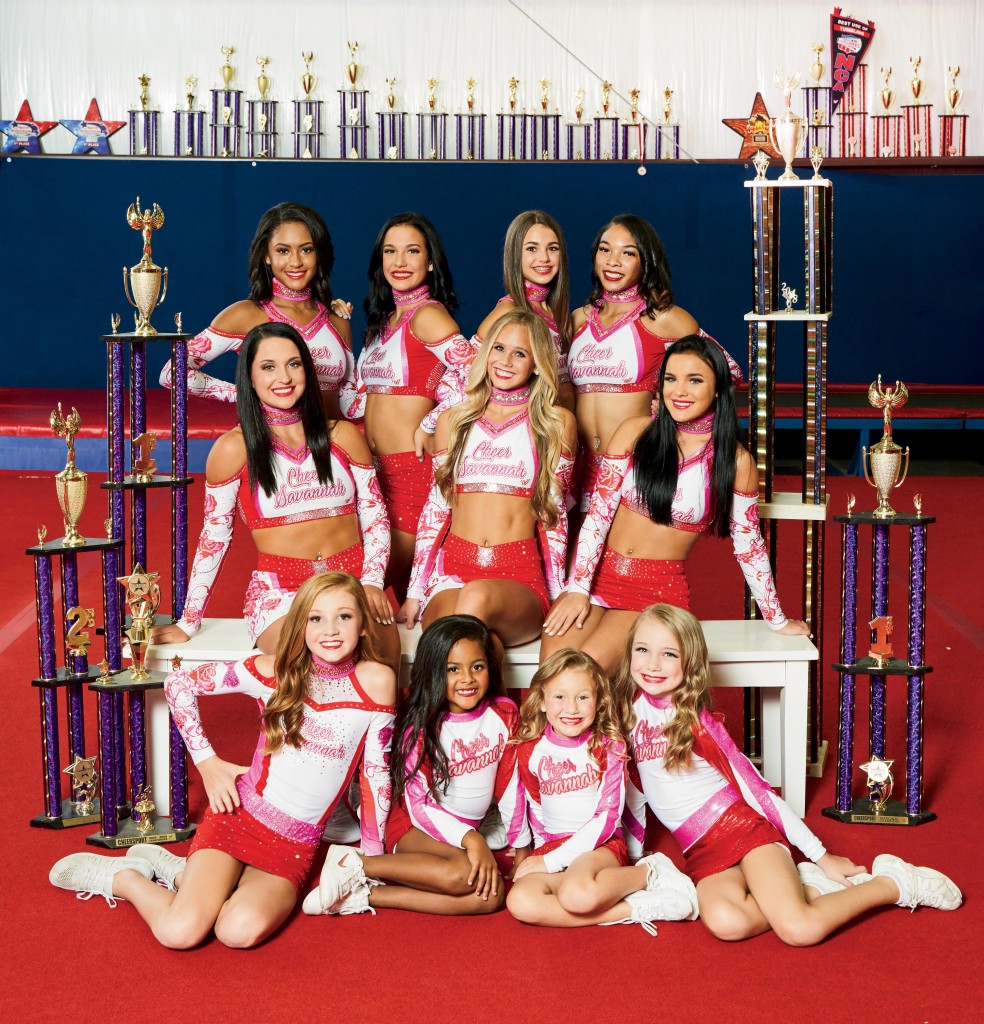 his past February, Cheer Savannah was on the top of the world. Stephanie Britt, the owner of Cheer Savannah, watched the coaches and young women of her gym represent themselves in the season exactly as she’d taught them. It was more than just the precision choreography, amazing tumbling, and show stopping beauty the teams presented on stage – it was the grit as well as the love these girls have for one another that sets them apart. Every age group lifts each other up both physically and metaphorically.

Lady Lace and Madam Pearl had brought the house down in an Alabama competition to each win a National Championship in January. Madam Pearl snagged a bid to the World Championships as a first-year team by winning the highest score of the event. Then in March, in New Orleans, Lady Lace earned the first ever paid bid in the program’s history worth over $20,000, to the 2020 world championships in Orlando. The industry rumor mill had this powerhouse team as a shoe-in for a top five ranking globally.

“For the first time in Cheer Savannah history, we had two teams going to Worlds,” said Britt. For the past eight years, Cheer Savannah has won a bid to the Cheerleading World Championships, placing in the top 10 since 2016. Sending two teams was a dream come true, even for a school like Cheer Savannah that established itself as an icon in its first season back in 2000. “We have always had great teams from Tinys to seniors… but these were the best teams we’d ever put together.”

“What I’m most proud of is that I now have second generation cheerleaders. To me, that says we did it right, I’ve learned over time, winning first place is irrelevant if you lose the kids.”

And then came the news out of New Orleans – the girls had just narrowly avoided an outbreak of COVID, one of the largest in the country. “Corona started spreading in New Orleans while we were there, but we managed to escape it,” said Britt. Even so, as the pandemic grew, Cheer Savannah was shut down along with everything else.

“We spent the month of March holding out hope. Then we thought Worlds might be delayed,” said Britt. “We started hearing rumors of the competition being pushed back…”

And then came the news. The Cheerleading World Championships were canceled. The dream was over.

“For two months, that dream kept us going. To find out there would be no Worlds… was deflating and heartbreaking for my kids,” said Lady Lace Coach Samantha Brown. “The news was released to gym owners and then immediately an Instagram account blasted it before I had the opportunity to tell my team. We cried. We were depressed. I think we all lost a little bit of hope.”

It would have been easy to sink into despair, but that’s something cheerleaders simply don’t do. Especially not these cheerleaders. Britt has always made it her mission to not just help her students achieve their goals in cheer, but to teach tenacity, resilience, and strength to help them achieve their goals in life. Giving up just isn’t the Cheer Savannah way. “You fall down six times, you get up seven,” says Britt.

“That’s when my coaches stepped up to the plate and said we’re going to run two miles a day, do virtual workouts, and stay connected just to keep the mind and body going. We knew when the season was canceled that our kids needed something to look forward to,” said Britt. “I promised our kids that one way or another, in 2021, we are going to compete.”

Girls from Cheer Savannah have been selected as models for a variety of Cheerleading Apparel Companies over the years. It is no secret that their students are widely recognized as the industry’s most stylish and beautiful. So while they are training hard now, with no competitions in site, Britt and her coaches selected an ambassador team to help prepare the athletes for college cheerleading appearances and responsibilities. Cheer Savannah is partnering with businesses all over the Coastal Empire, helping spread cheer and style whenever it is needed. Whether it is modeling gigs or grand opening appearances, the school is teaching their athletes self-confidence and professional graces. 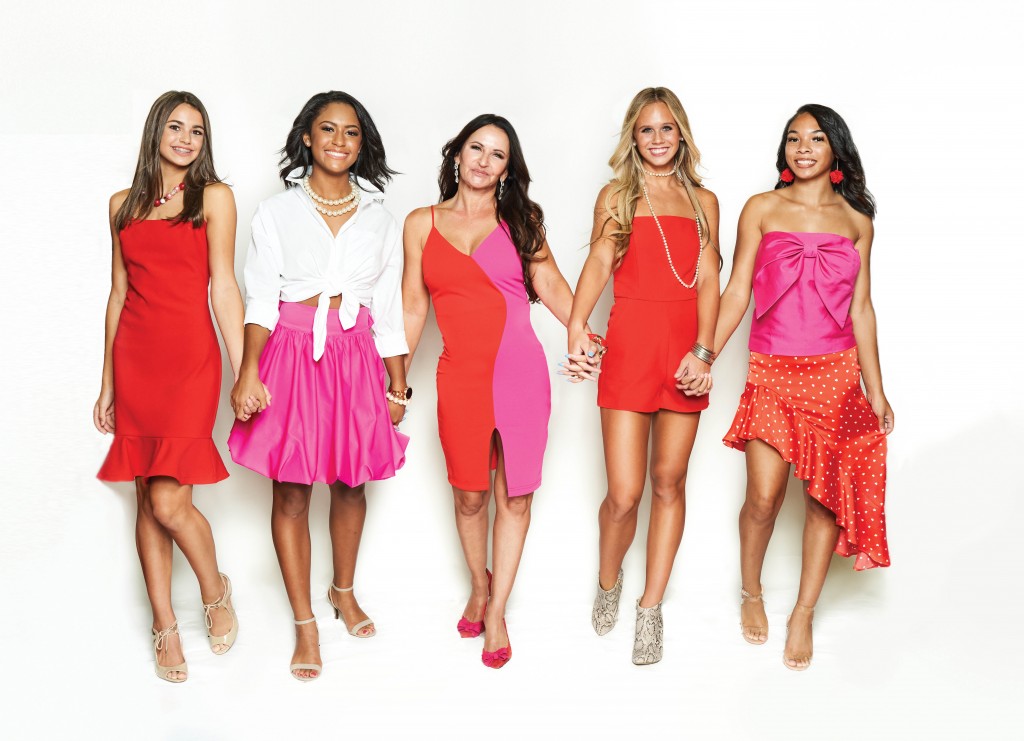 “I call it Disney World,” jokes Britt. “When you’re surrounded by 185 great kids, it’s impossible to not be happy. I tell everyone, ‘If you’re having a bad day, come to the gym. These babies see the beauty in everything and everybody.”

It’s a testament to the staff’s passion for their program that they were able to turn things around for a group of athletes who’d just watched their dreams be denied. To the kids, it’s about more than just the sport of cheerleading. It’s about the promise they made to each other by a candlelight ceremony. The bond the teams have is a sisterhood for life. The girls learn early on how to celebrate each other and encourage their teammates. They do it for each other.

“What I’m most proud of is we have second generation cheerleaders. And, we get wedding invitations. Also, Coach Eddie escorts some of our athletes on homecoming court. To me, that says we did it right,” Britt said. “I know there are programs that are producing world champions, but they’ll cut you as soon as you have a setback. It’s all about winning for some and in my younger years, maybe for me. But I’ve learned over time, winning first place is irrelevant if you lose the kids.” 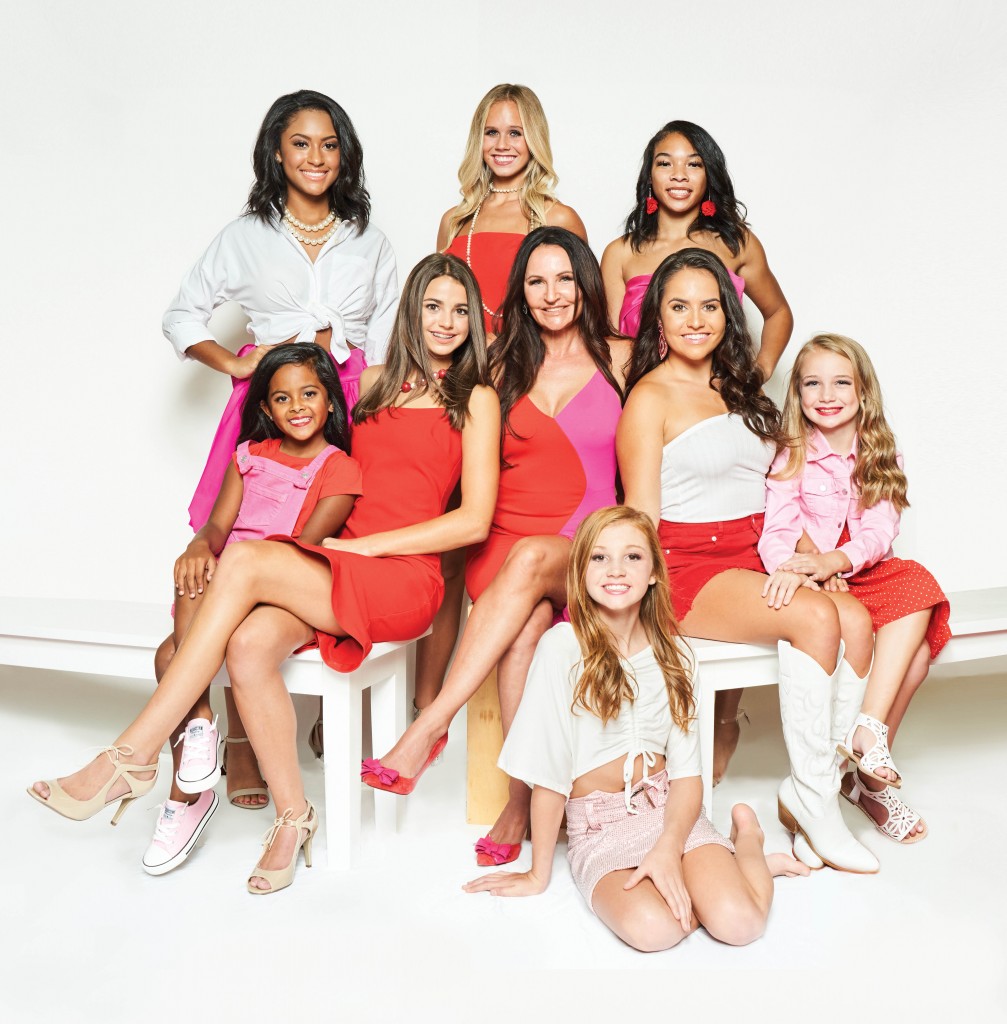 “It is more important to nurture them while demanding their best so they can grow into great young women,” says Coach Sam. After several athletes have been quarantined, Britt elaborated, “In a pandemic you’re winning if you can just keep the kids healthy, cheering, motivated and focused.”

“We stress integrity, discipline, and self-respect,” says Coach Sam. “We talk about how they represent their families, their schools, and our program wherever they go. As their coach I want to inspire them to be role models to our younger cheerleaders who all want to be them. Our job is to help our athletes be successful far after their cheer career ends.”

With success comes scrutiny. Cheer Savannah was the first all-star gym in the area 21 years ago. No one had heard of competition cheerleading so locals were unsure about the glamour, dancing, and makeup. But as a pioneer, Britt remained unphased and grew her program. Eventually a Cheer Savannah student and coach went out on their own and more all-star programs emerged in the area. 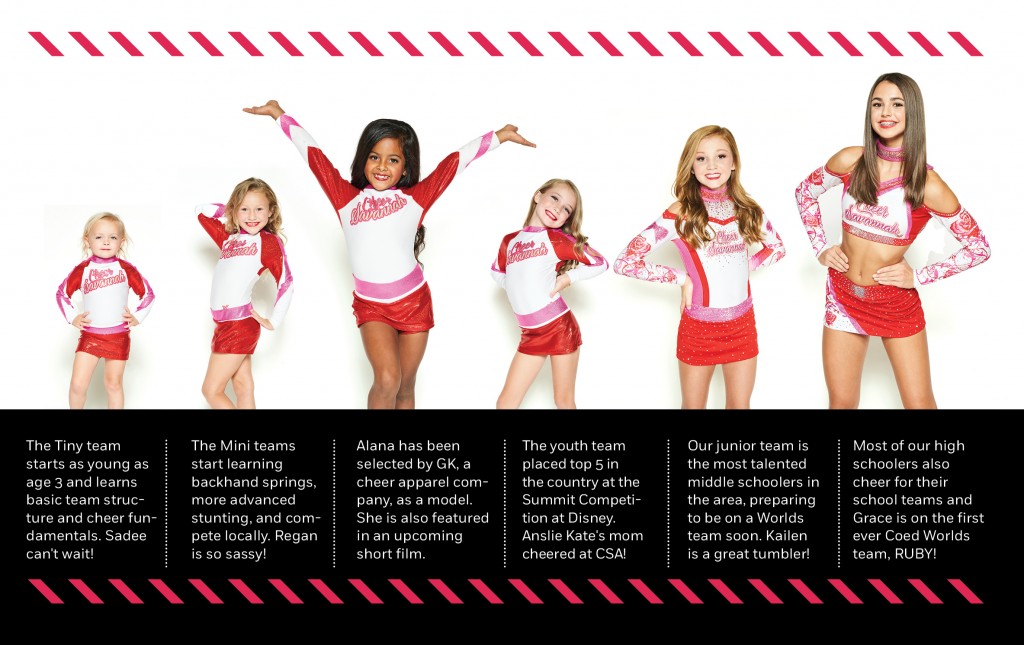 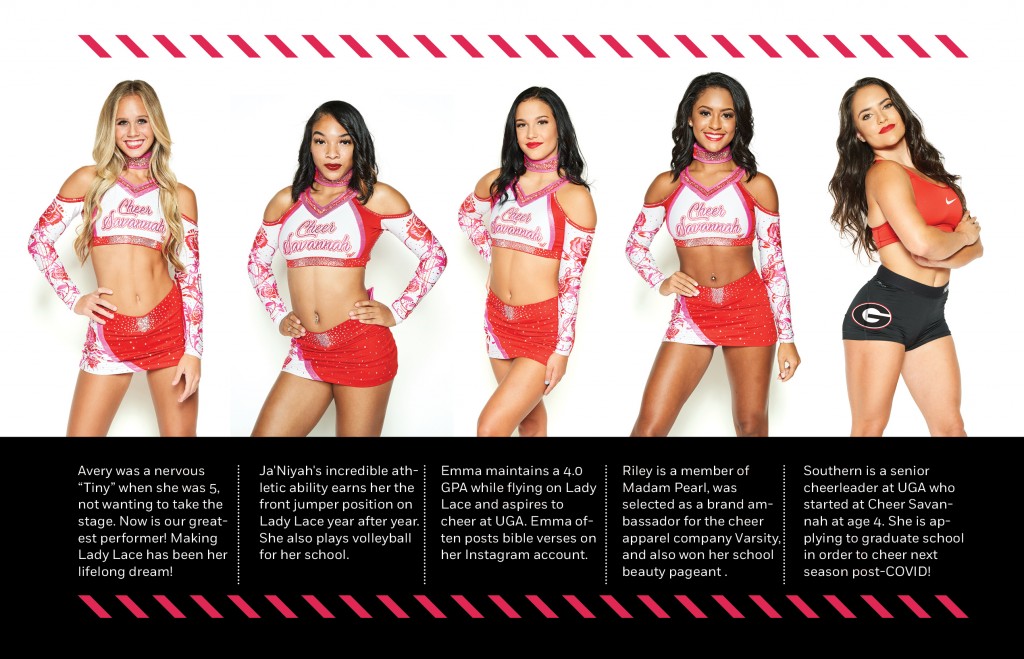 Cheer Savannah’s head Choreographer, Eddie Sealey, pointed out, “We create winning routines for many of the school teams in the state as well as teach tumbling to hundreds of aspiring cheerleaders. We made it cool to cheer, and now the Coastal Empire is booming with all-star cheerleaders. I love how Cheer Savannah is accepting of all kinds, all sizes, all colors, and all creeds. I am committed to making every one of our kids feel beautiful and talented when they step on that mat.”

“Every cheer gym in the area is great,” says Britt. “But we really strive, above all, to instill a strong moral compass to navigate this challenging and liberal culture. With so many social pressures, and digital influences, Cheer Savannah helps steer the students in the right direction by rewarding good decisions as much as good skills. The staff is firm, no matter how talented a child is, there is no bullying, no disrespect, no excuses, and no alcohol or drugs allowed.” 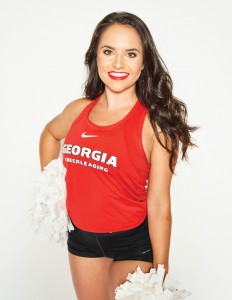 From Cheer Savannah to UGA cheerleading, this hometown girl is destined for greatness

Southern was on the very first “mini” team at Cheer Savannah 2 decades ago. After devoting her life to the sport, Southern, a graduate of Calvary in Savannah, made the University of Georgia Cheer Team as a freshman. Entering her senior season between the hedges, Southern heads the UGA cheerleading Instagram account and is quick to volunteer for community appearances where kids and elderly alike are excited to meet a UGA Cheerleader! Southern has appeared on many Georgia football promotional videos. She not only had the highest score of any incoming freshman ever at UGA cheer tryouts, she is also a member of Team United, a Christian student organization on campus. She travels on many mission trips to spread her faith and help those in need. Southern’s Cheer Savannah teammate, Ijheri Jefferson, is a senior cheerleader at the University of South Carolina! “To have both girls make the teams the same year, and watch them both on TV, is a dream come true for me,” says Coach Eddie. Southern is a journalism major and hopes to be broadcasting on ESPN someday as she loves sports and the stories they tell. Growing up in Savannah, the daughter of Benedictines Head Football Coach Danny Britt, and having her mom as her coach all of her life, Southern is most comfortable in Sanford Stadium calling the plays in her head and cheering on the Dawgs. Southern’s brother, Demarcus Dobbs, played football at UGA and it was then that Southern set her sight on a dream. “She is humble, she is hard working, and she is a light,” says her mom. “She wrote her goals on her mirror in lipstick along with a variety of bible verses, and she never strayed”. Southern attributes her success to learning the importance of character and work ethic from her Cheer Savannah family. • 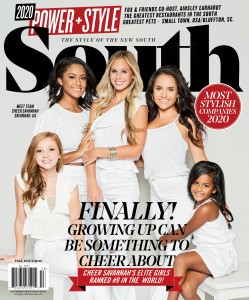 Cheer Savannah was featured on one of three collectible covers for South magazine’s Oct/Nov Issue #85.  Our power and style issue 2020, features the most stylish companies in the South, Southern Charm star Kathryn Dennis, NFL player Anthony Lanier, Assistant U.S. Attorney and former professional skateboarder Greg Gilluly, the small-town Southern style of Bluffton South Carolina, the inside story of a $300 million hotel, the gala of the decade and some of the coolest restaurants this side of I-95.  To order your copy of this cover go to ShopSouth.

Enjoy this article? Subscribe now to the print edition or get instant access to our interactive digital edition.