It is said that history repeats itself. Reflecting on this story in the December/January 2010 issue of South, it's apparent that we need to do better in learning from the past. 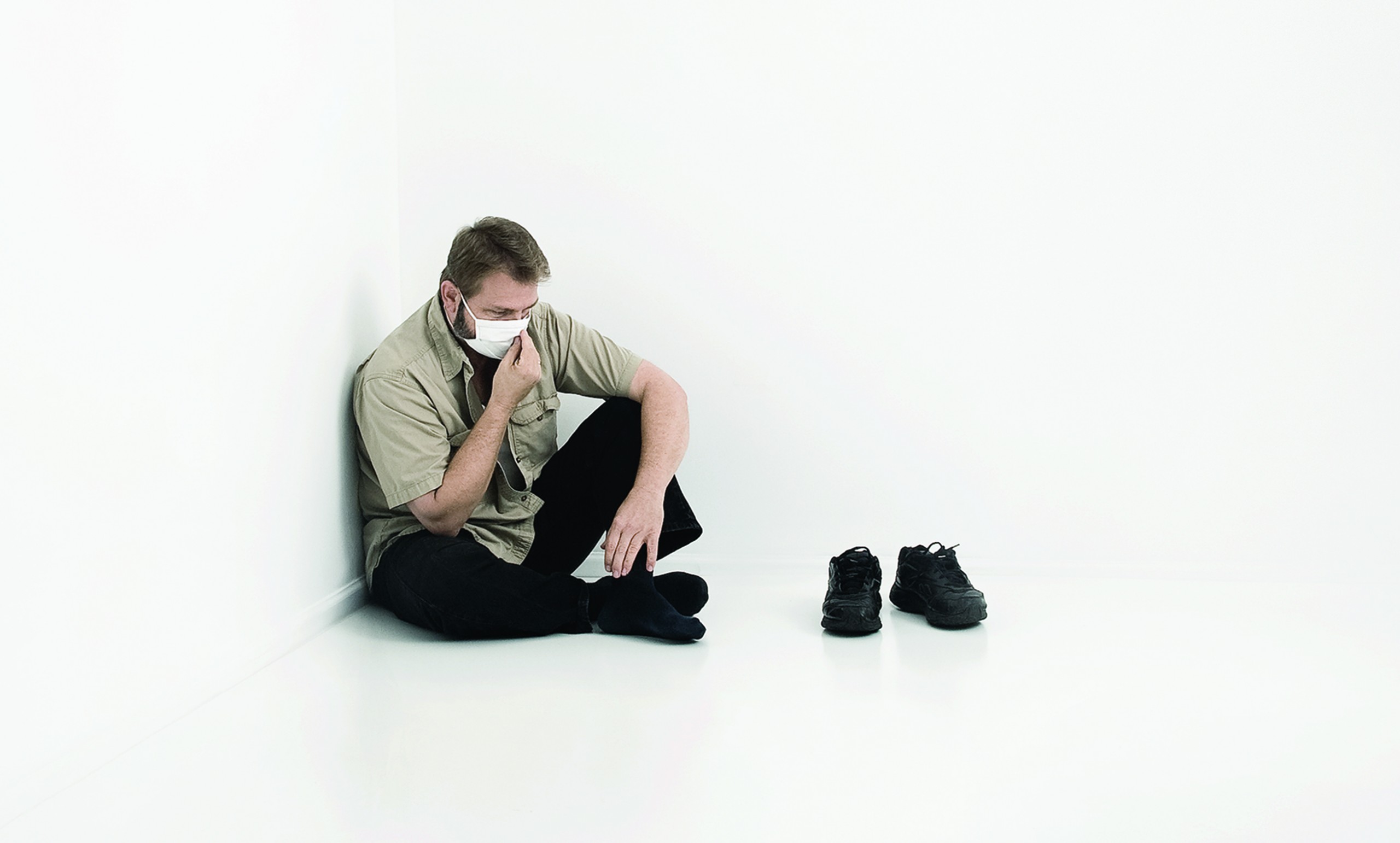 In 2010, South wrote this eerie introduction to a piece titled, “Quarantine: Six Days in Captivity”:

“With swine flu close on his heels and the Chinese Department of Health at his back, architecture professor Tim Woods found himself trapped in a foreign quarantine center—with no way out.”

A decade later, we find ourselves reaching into the same repertoire of words to describe everyday life in 2020.

The opening paragraph harkens a sense of deja-vu with an unimaginable premonition:

When Tim Woods stepped off his plane in Beijing after 14 hours in the air, a tiny red laser, pointing at his forehead, greeted him. A few tense seconds passed before an airline official wearing a surgical mask confirmed that Woods’ temperature was normal and waved him through the checkpoint. Woods wasn’t concerned: “I just thought it was pretty interesting technology,” he admits.

Woods described an experience quite similar to what Americans encountered on our own soil in the early months of the COVID-19 outbreak. Upon his arrival in Beijing, Woods was visited by three members of the Health Department, dressed in hazmat suits and surgical masks, who delivered a note. “It said the Health Department of China has determined that you should be quarantined,” Woods remembers. “It didn’t tell us how long, it didn’t tell us where or any of the circumstances.”

It is said that history repeats itself. Reflecting on this story, written by Holly Huitt, it’s apparent that we need to do better in learning from our past. Woods encounters teenagers in quarantine, where his experience mirrors the attitude of many young Americans in the same situation today:

Most residents made the best of the situation, using their resources to make life as bearable as possible while they were trapped in quarantine. Everyone, that is, but […] a group of rowdy teenagers on an exchange trip [who] ended up in quarantine […] “These young people did not heed the warning, and they began breaking rules and taunting the guards,” Woods says.

It’s incredible how short our memory can be. Woods describes the Chinese government’s process, saying, “Your civil liberties are not as they are in other countries. You can be taken away with no process, no nothing.” If we learn but one thing of all the signs we missed, let it be this. Regulations are a slippery slope of sorts. If we were to look at this article in 2019—blissfully unaware of what was to come—this type of lockdown control would be unfathomable. But here we are. Surely, there’s a line between keeping people safe and controlling their lives; however, it’s important that we don’t lose sight of that line in the midst of fear and uncertainty.

Here’s to a healthier, happier 2021 and beyond! Let’s learn this lesson the second time around, because it is doubtful that third time’s the charm when it comes to global pandemics. 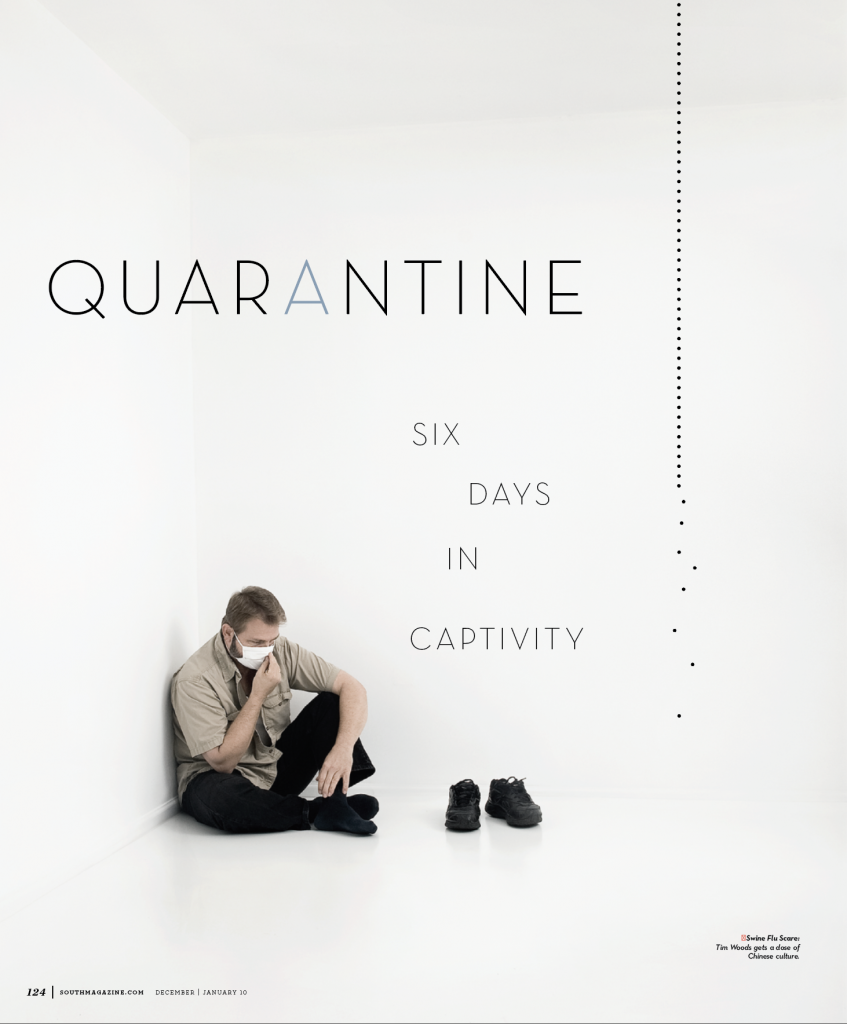 With swine flu close on his heels and the Chinese Department of Health at his back, architecture professor Tim Woods found himself trapped in a foreign quarantine center—with no way out.

When Tim Woods stepped off his plane in Beijing after 14 hours in the air, a tiny red laser, pointing at his forehead, greeted him. A few tense seconds passed before an airline official wearing a surgical mask confirmed that Woods’ temperature was normal and waved him through the checkpoint. Woods wasn’t concerned: “I just thought it was pretty interesting technology,” he admits.

As a widely traveled architecture professor at the Savannah College of Art and Design, Woods had been considering a trip to China for a long time. “It’s one of the places that’s on my list,” he says, “so when my sister went last year and came back with all the images, I thought ‘Well, if she went, I have to go.’” So on June 5, Woods and his 20-year-old son, Walter, embarked on a two-week trip with a small tour group of like-minded teachers and professors, intent on not only seeing but truly learning about Chinese culture.

Woods didn’t know that in May, just a few weeks before he left for the other side of the world, the Chinese government announced that it would begin quarantining arriving visitors who exhibited fever or flu-like symptoms. Government officials were concerned about the spread of H1N1: commonly known as swine flu. At the time of Woods’ arrival in China, there were 126 confirmed cases of H1N1 infection in the country—and Beijing was one of the most heavily infected areas. Woods knew that swine flu was circling the globe, yet he had no idea how strict China’s quarantine system was.

But he soon found out firsthand.

Less than 24 hours into the trip, an authoritative knock rattled Woods’ hotel room door, just as he and his son were getting dressed to go on their first dinner with the tour group. He pulled open the door and there, in the hallway of his 4-star hotel, stood three men wearing hazmat suits and surgical masks. They silently handed Woods a note. “It said the Health Department of China has determined that you should be quarantined,” Woods remembers. “It didn’t tell us how long, it didn’t tell us where or any of the circumstances.” What the messengers did communicate—despite a language barrier—was that Woods and his son had 30 minutes to pack. They escorted the two Americans into a vehicle that was more station wagon than ambulance.

As they hurtled toward a dilapidated hotel on the outskirts of Beijing, they had no way of knowing that it would be three days before they found out that the cause of their quarantine was a young girl with a fever, whose plane seat happened to be within a few rows of theirs.

When they arrived at the run-down hotel that doubled as a quarantine facility, the armed guards that patrolled the entire building immediately escorted the two Americans to separate rooms. “We didn’t sign in; they just knew who we were,” Woods recalls. The environment can only be described as absurd: As a sign of welcome, employees gave the Woodses a bouquet of red roses for their rooms. Woods also remembers, “There were large signs that said things like ‘I hope your stay was pleasant’ and ‘All in good health.’” Later that night, the Woodses received a flyer detailing breakfast, lunch and dinner times, as well as the twice-a-day temperature and vital signs checks.

Day one turned into day two, and Woods sat in his room without any answers, unable to communicate with the Chinese staff. Meals came and went in the stale room, where the air-conditioning vents had been blocked off and the windows bolted shut. The only relief was a small smoker’s courtyard, but the “residents” had to wear surgical masks and keep a mandatory distance from one another. Woods’ family in the United States had no idea of the predicament their two relatives were in: They never suspected that Woods and his son were anywhere other than on a bus, driving through the Chinese countryside.

On the third day of Woods’ quarantine, new neighbors arrived: passengers on a flight from San Francisco. Among them were a number of Chinese Americans, which meant the patients finally had translators. The newcomers posted signs advertising their services, generously working as the liaisons between the non-Chinese-speaking residents and the staff. Thanks to the translators, Woods was finally able to figure out that he would be released on the seventh day of quarantine, despite the fact that the initial swabs the staff took from him on day one could be tested within eight hours. “We told our translator it had been days and we hadn’t heard anything,” Woods explains. “She asked the doctor and he said, ‘No news is good news. If they don’t call you, you’ll be fine.’”

As the initial crushing fear of being infected with H1N1 wore off, Woods and his fellow residents, about 250 in all, began to take control of their surroundings. Woods, for his part, appointed himself fire marshal. “I went around and explained to people how to escape in a fire: not to go to the stairwell but to grab the wool blanket from their rooms and go to the lobby,” Woods says matter-of-factly, staying true to his levelheaded professorial nature.

Most residents made the best of the situation, using their resources to make life as bearable as possible while they were trapped in quarantine. Everyone, that is, but two teenage boys from California. Woods knew the unspoken rules of the building: “I had talked with the embassy, and they suggested that no matter what I did, I was always to be respectful and never raise my voice.” So when a group of rowdy teenagers on an exchange trip ended up in quarantine, Woods watched their behavior carefully. “These young people did not heed the warning, and they began breaking rules and taunting the guards,” Woods says quietly, watching the rain fall outside of his Savannah home. “Magically, two of the boys were taken to the Chinese hospital. They suspected them of having a fever—which they did not,” he adds. “They were taken away for two days and went through a battery of tests in isolation.” Woods says that neither the chaperones nor the boys’ parents were allowed to communicate with them while they were hospitalized.

That’s when Woods realized the seriousness of his situation. “Your civil liberties are not as they are in other countries,” he emphasizes. “You can be taken away with no process, no nothing.”

On the sixth full day of quarantine, Woods and his son were discharged at 6:31—the exact time their plane had landed seven days earlier. They received quarantine papers and, much to their surprise, a graduation ceremony of sorts. “We were given a dozen red roses in a spray, like you would get for a homecoming queen,” Woods explains, cradling an imaginary bouquet to illustrate the size of the gift. “There’s this interesting kind of cultural difference, being Westerners and Easterners. There are so many differences but also so many things that are the same.”

The professor had a lot to be angry about: He did, after all, travel halfway around the world to learn about Chinese culture, architecture, food and history; instead, he spent a week in a dilapidated hotel, eating meals in isolation. But he wasn’t angry—because he realized that in six days, he had seen a part of Chinese culture that no tour, no guidebook and no website could have explained. “It was a cultural collision,” Woods says simply, truthfully. “Really, an eye-opening thing.”

And when Woods and his son returned to the safety of Savannah later that June, they had a very different kind of souvenir. Instead of pulling out photos of Hong Kong’s giant Buddha, Woods proudly—yes, proudly—displays a thick, official-looking stack of quarantine papers and a blank hotel questionnaire printed with bizarre inquiries like “Were you satisfied with the general service?” The tiny yes and no boxes that rest beside each question don’t even begin to tell the story, so they sit empty. This was beyond yes and no and beyond anything Woods could have imagined: It was a once-in-a-lifetime portrait of China.

In April 2009, the Centers for Disease Control and Prevention confirmed the first novel H1N1 patient in the united states.

On June 11, the World Health Organization raised the worldwide pandemic alert level to phase 6, meaning that a global pandemic was underway.

From May to August 2009, the U.S. Department of State received thousands of reports of quarantined American citizens.

Susie Abromeit: In Bloom & On a Roll