A Boozy Revolution is Brewing

Boozy Tea from Owl’s Brew is the newest spiked drink on the market. 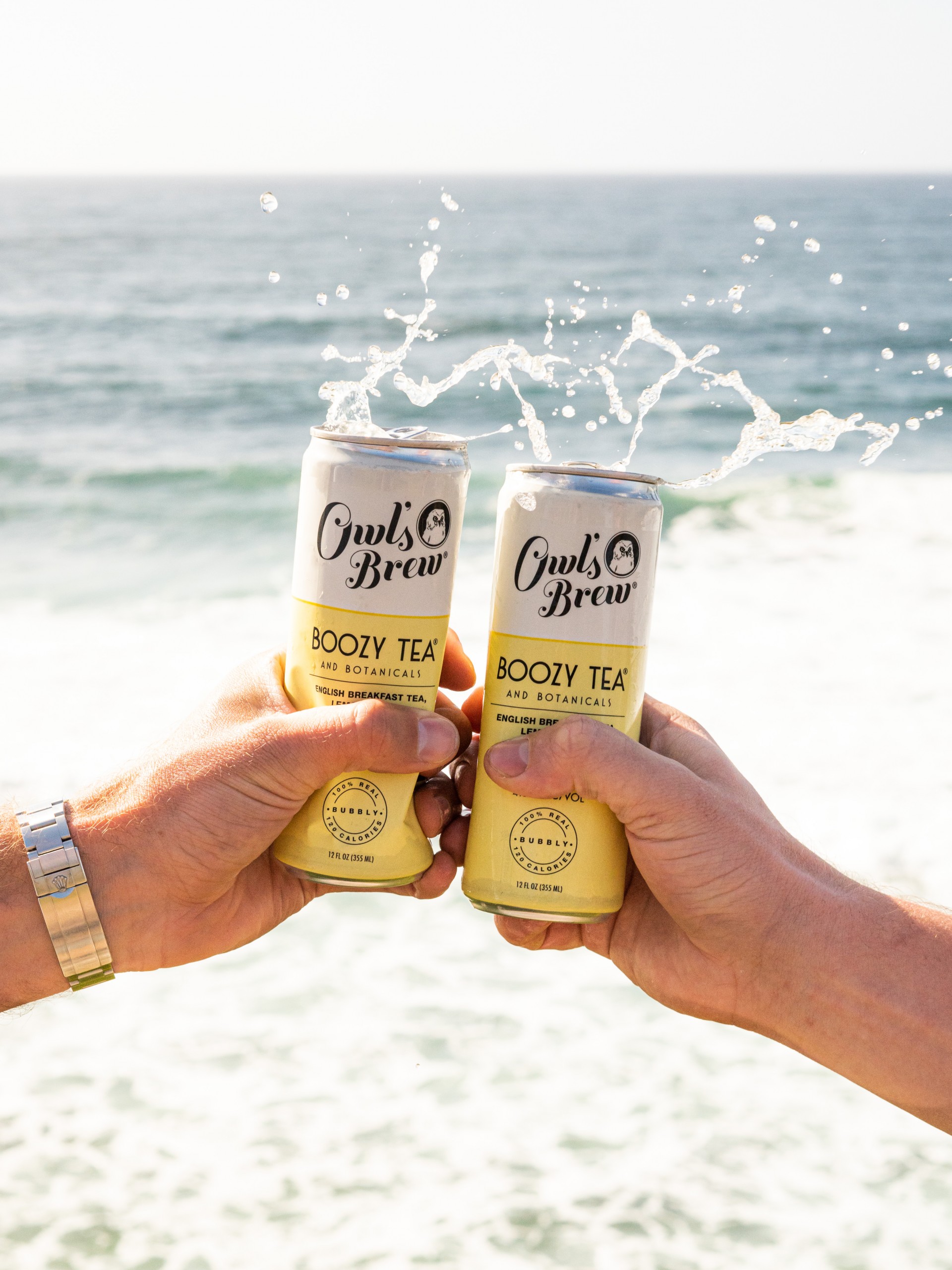 Boozy Tea from Owl’s Brew is the newest spiked drink on the market. This fresh-brewed, organic, 100%-real-ingredients hard tea seltzer is taking over the boozy beverage world and unearthing the industry’s “ugly truths.”

Nowadays, it seems like a new skinny-canned, alcoholic concoction pops up on a daily basis, boasting low calories, low carbs, low sugar and gluten free ingredients. It’s easy to lump them all together into the same category, as most brands effectively are the same. Recently, South had the pleasure of chatting with one of these new companies that is offering a refreshing take on the industry. Boozy Tea stands apart from the other brands, not by sly marketing, but by simply doing it better.

First and foremost, Boozy Tea is a hard tea seltzer that uses real ingredients, not “natural ingredients.” “No natural ingredients?!” you say. No, just real ingredients. See, in FDA terms, “natural” ingredients simply means that they were derived from a product of the earth at some point—this could be literally anything (and it will likely surprise you). Maria Littlefield, cofounder of Boozy Tea and Owl’s Brew, explained the difference to me, and I’ll never look at those words on a label the same way. Owl’s Brew takes great care to be completely transparent with their customers about exactly what typical labels really mean (ie. “ugly truths”) and what exactly goes into Boozy Tea. To find out how some of your favorite seltzer brands create the “raspberry” flavor, keep reading to the Q&A…just know you’ve been warned! 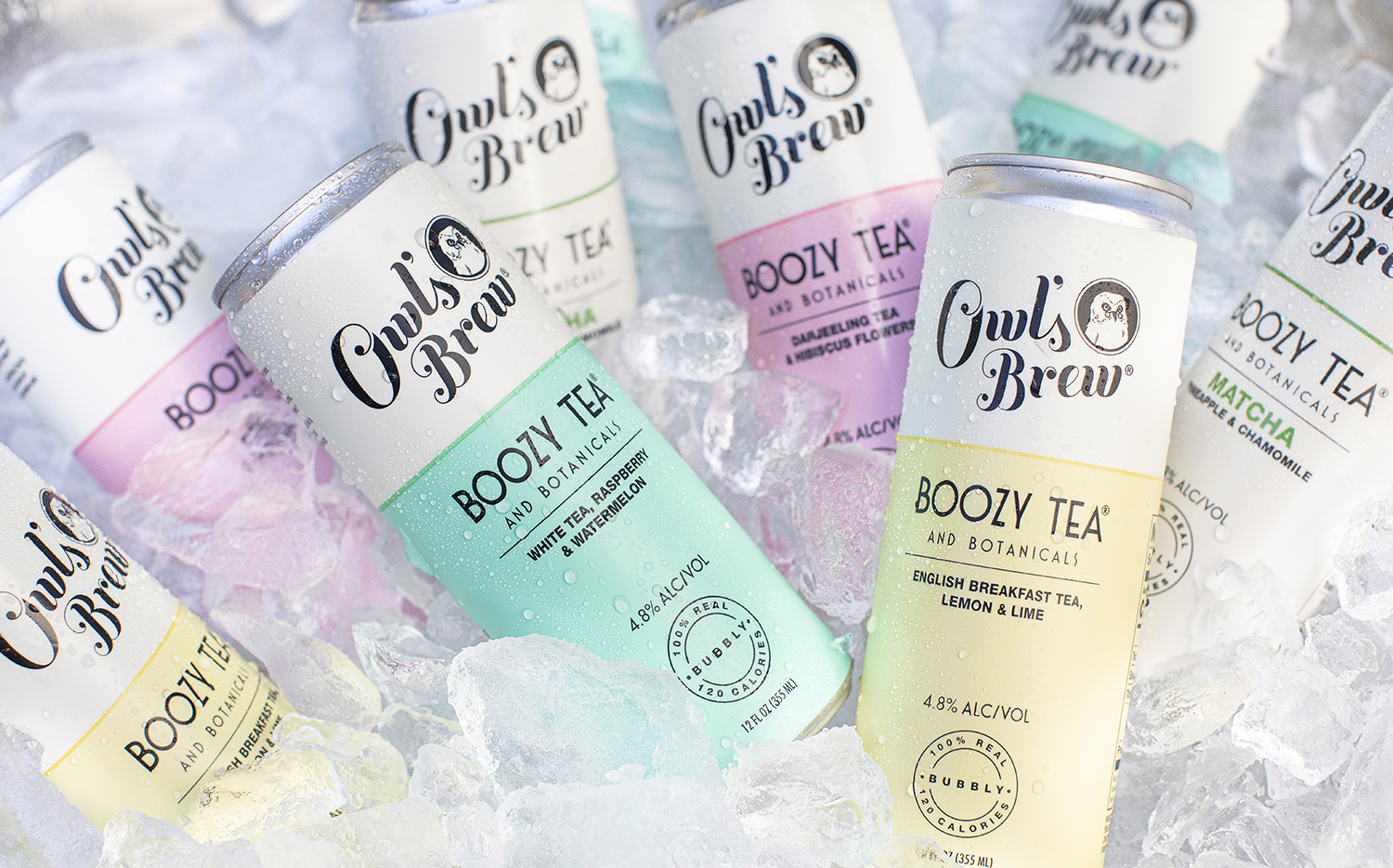 Now, I won’t lie; I enjoy a typical hard seltzer as much as the next person. However—ugly truths aside—Boozy Tea just tastes better. When they say there is no “chemically” aftertaste, they’re not lying. Even the best-tasting competitors that I have tried still leave a hint of synthetic aftertaste, but not Boozy Tea. The tea is not overpowering; it’s light, refreshing, and best of all, clean. It’s the drink of summer ’21 and beyond!

Read on to the Q&A to learn all about how Boozy Tea came about: the cofounder’s beginnings as a tea sommelier, brewing Boozy Tea in buckets at Sundance Film festival, cringing at the beverage production industry’s ugly truths and sticking it to the flavor houses, and building a community of transparency and empowerment.

South: So, what is Boozy Tea, to someone who knows about hard seltzers and similar drinks but doesn’t yet know about Boozy Tea?

Maria Littlefield: The quick answer is that Boozy Tea is a hard tea seltzer. But what makes us different are a few things, but one is that we use all whole, real ingredients. We don’t use anything artificial or “natural,” meaning no synthetic flavors (which I’ll talk about more in a minute). You get that nice, refreshing flavor without that weird chemically aftertaste.

When [Jennie Ripps and I] got into this, we realized there was a huge lack of transparency in the industry, and in particular, what’s actually in these things. Everyone says, “Low calorie, low sugar, low carb,” but, how? Because real ingredients have calories, right? It just didn’t make sense. And when we were first getting started, everyone kept directing us to a flavor house.

One of our goals was always to launch something canned and ready-to-go, and so when we started looking at the market, we just realized everything had “natural” flavors and “natural” flavors are actually made in a lab—they’re not natural at all. So really, the big difference when it comes to Boozy Tea is that it’s made with all real, whole ingredients.

S: In checking out a competitor, they claim they use real fruit juice. But, is there an “ugly truth” behind these “natural flavors?”

ML:So, when we went to start putting the tea into cans, we had been making Boozy Tea in buckets—literally, we started out brewing in buckets for friends and for big events. Because of the work we did in marketing, people started asking us to do events in Miami, and we did Sundance Film Festival. Which all sounds kind of glamorous, except for the fact that Jennie and I were back in the kitchen, fresh brewing buckets of tea for like, 3,000 people. We thought, “There must be a better way.” When we went to actually produce it at scale, everyone kept sending us to a flavor house. We told them our recipe – how we fresh-brewed, added juice and wanted to can it – and that was our process. When we kept getting directed to flavor labs, we wondered why you couldn’t just brew tea?

We understood, you know, it’s much less expensive, the product is much more consistent when it’s made in a lab every time, but it’s also filled with “icky” things, for lack of a better word. I think when it came to flavors labeled “natural,” that was really eye opening to us. And it’s not just other drinks, but it’s in a lot of other products. They’re actually made in the same way artificial flavors are made and synthesized with chemicals. The base can be animal byproducts—I mean so many gross things—like some of your favorite hot pink beverages are made from this juice from beetles. And we were kind of shocked, because I had always imagined it was raspberries smushed up, or some sort of concentrate, but no. That, to us, was the “ugly truth.” I mean, even just knowing what you’re actually putting into your body, even when you’re drinking.

S: There is a lot of information about FDA regulations and manufacturing, as well as detailed explanations about the production process. Transparency and accountability seem to be a high priority for Owl’s Brew that sets you apart from your competitors. Do you see customers appreciating this approach?

ML: I think there’s a general movement of people who really want to know what exactly is in the product that they’re buying, or how they’re made, what ingredients and why—the whole story. We get a lot of feedback about people appreciating the real ingredients, not only for the sake of knowing what you’re putting into your body but also, we don’t want people to have to worry about what you’re putting into your body, even when you’re drinking. We want people to be present in the moment and ultimately trust our brand and know that we took an extra step inside. Overall, that’s really our goal and we seem to be getting good feedback. 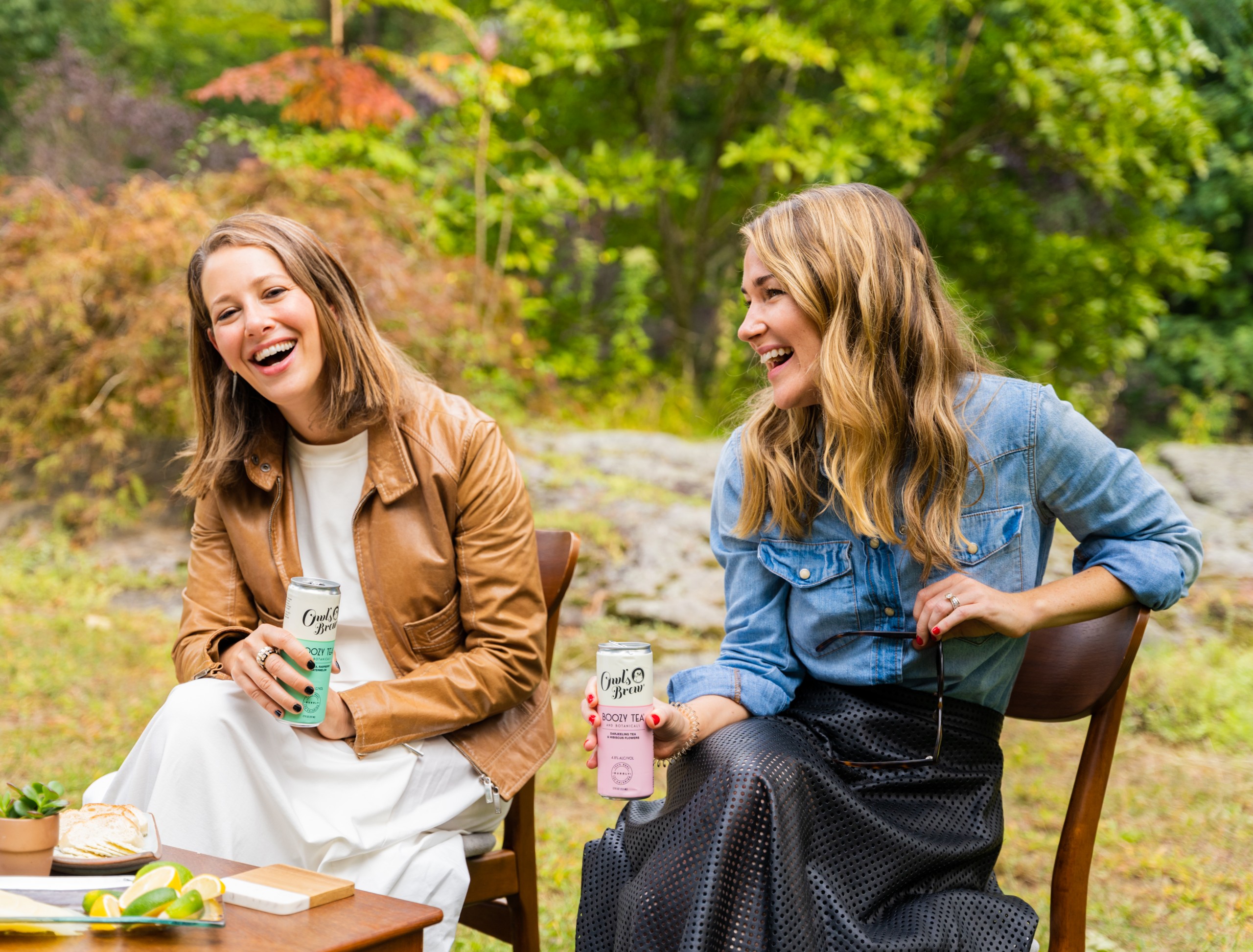 S: How did you and Jennie become “tea experts”?

ML: Jennie’s background is actually in tea, she’s a tea sommelier. We started by blending tea in our kitchens. She was blending tea for function; she had a family member who was sick, and she was looking for ingredients that really packed a punch. She came upon the whole world of tea botanicals and was amazed that you could just drop green tea into water and have this antioxidant, anti-inflammatory, vitamin C-rich beverage.

At the time we were working at a marketing firm and she was blending all this tea… and you know, we also liked to get cocktails, so we started spiking the tea and we were thought, “Woah, these are delicious! Why has nobody done this before?”

S: How is your brewing process different than the one that other co-packers dictated to you? What about the process is different and how are you able to execute that if it goes against industry status quo?

ML: We fresh brew organic tea in the same way you make your morning or afternoon tea—it’s loose tea that goes into a gigantic kettle. If we say it’s hibiscus, it’s actually brewed from dried hibiscus. And then everything else—it’s real lemon juice, real watermelon juice, real fruit. And because of that you get the added benefit of vitamin C when you’re drinking, and all the other nutrients as well. I mean, if you can actually imagine giant tea bags—thousands of pounds of tea—and a giant tea kettle, that’s really what we do. Like a big, steaming pot is our process.

The fact that there is actually nutritional value in the ingredients we use was also really important to us, so that you’re giving your body something back when you’re drinking.

S: Where do you source ingredients from?

S: What is the Wise Women Collective? How is Boozy Tea connected with women empowerment?

ML: This is something that is really near and dear to Jennie and my hearts. The industry in general is so male dominated. I think only about four percent of brew masters or leadership positions in this industry are women. And for us, it’s so important—we’ve had so much support. For us it’s about giving back and building a community around that by offering mentorship programs, supporting women’s gatherings and supporting women’s initiatives. We have a couple of charity programs that we’re launching soon. We want to make sure we’re connecting, giving back and building a community not only in the industry but also for women who are trying to build businesses. Hopefully we can help in that way. That’s our overall goal.

If there’s a women-based gathering or something you’d like Owl’s Brew to support, you can submit your event here. If there are any charity initiatives centered around women, and you want to be considered for a product donation or a charity donation, you can submit that there as well. 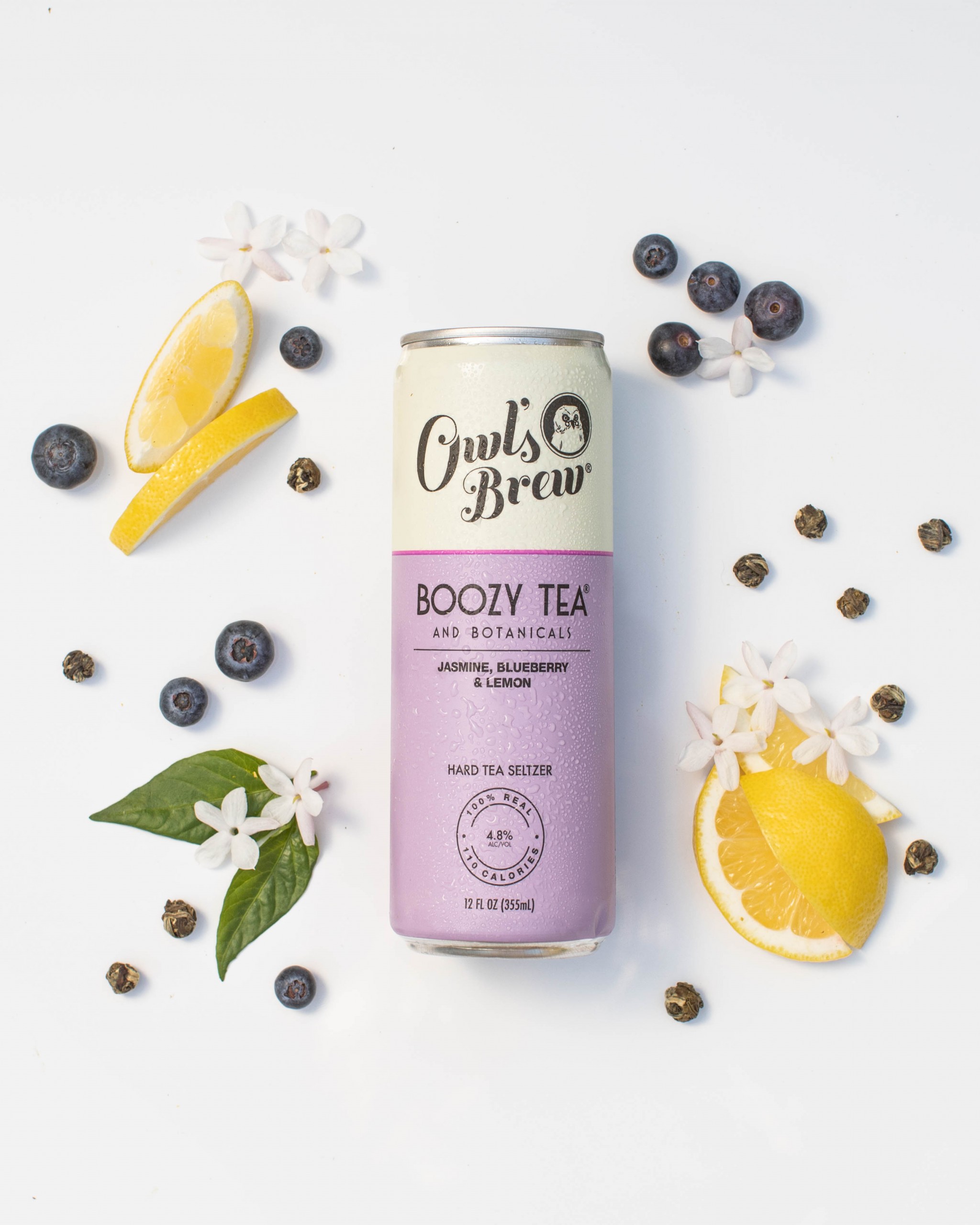 Head to theowlsbrew.com to learn more about Boozy Tea, and click here to find where you can can Boozy Tea near you!

Eatin' Oysters Has One Shelluva Benefit

Spirits with a Story to Tell: Burnt Church Distillery