Spread the Love this Holiday Season

Have you ever considered what it would be like to be homeless? To go hungry? To live without certain luxuries that we often take for granted, like proper clothing, toiletries, and reliable income?

It’s been 22 years since the Battle of Mogadishu, but the images and the sounds still come. Retired Delta Force Command Sgt. Maj. Tom Satterly remembers watching the first Black Hawk helicopter spin out of control, realizing in that instant that instead of capturing enemy leaders his objective had become rescuing the Americans on board.

Heavy eating got you in a food coma? Let these vibrant, veggie dishes from our favorite restaurants wake up those taste buds!

From hapless, high-strung relatives, to trauma decisions made in seconds to endless amounts of paperwork, our nurses are there when we need them most. Never celebrated yet always inspiring-- You voted and here they are: The Greatest Nurses in the South

Turning Pain Into A Purpose

Headaches. Stomachaches. Occasional bed wetting. Persistent coughing. These are nothing new to parents, but instead of being merely age-old earmarks of childhood ailments, these symptoms could turn out to be manifestations of something deeper and more sinister.

Like many southern boys, Bobby Deen grew up on a decadent diet of his mother’s best southern recipes. After years of feeling overweight he decided to take control of his diet. The result has changed the notion that Southern food can be healthy and delicious.

Robert and Brenda Anderson have successfully translated their passion for meat, wine and cheese into the Smith Brothers Butcher Shop. The place is a neighborhood grocery, aiming to provide customers with fresh, wholesome and affordable ingredients that are also local.…

You voted and here they are, the cutest, sweetest, and most importantly, greatest kids in the South!

Emily Thurmon is on a journey to become one of the best ballerina’s in the country…. and at only 11 years old she just might do it.

This issue we are featuring the south's best getaways to stay fit while having fun!

A dive bar, by definition, is an unglamorous neighborhood watering hole where friends and strangers come to swig light beer and throw a few darts. It’s a place void of pretention and fancy cocktails, where nobody gives a damn who you are yet most everyone already knows. The best dive bars have walls lined with cheaply framed photos offering grainy proof of the famous faces that were also once right here in this same dark space, lifting the lounge to legendary status that’s revered by locals.

Physical and spiritual advice for the new year.

Adrian Peterson: In His Own Words

Adrian Peterson’s athletic ability was apparent from the start; he was a two-time all-state, all-area selection and team MVP at Santa Fe High School in Alachua, Florida. He went on to play football at Georgia Southern University, where he dominated the field from 1998-2001. He finished his college career with 6,559 rushing yards, a Division I football record. He was inducted into the Georgia Southern hall of fame in 2012. From there, he made it to the NFL and played professionally for ten years with the Chicago Bears.

For most of us, going to the gym everyday can get monotonous to the point of discouragement—let these Athletes inspire you to mix up your routine and have some fun in the process

Savior Of The Streets

On a dark night, near a dimly lit backstreet in the heart of downtown, Kenneth Brown walks where few of us would choose to venture

School Readiness begins in the Crib

Paul Fisher, a local retired businessman, believes targeting infants and toddlers could be the key to finding solutions to a wide variety of societal problems, including crime, poverty, low educational outcomes, and teen pregnancy.

The history of Hormone Replacement Therapy is a sorted one. Once hailed to be the go-to cure for reliving menopausal symptoms, reports in the early 2000s linked it to higher chances of developing cancerous cells and other health risks such as stroke and blood clots. Now, over a decade later, new information is coming out that could completely thwart this notion. While the benefits are still attractive to many patients, there are varying opinions on the long-term risks. We asked two prominent doctors to help us bridge the gap when it comes to this controversial method of coping with menopause.

On the scale of one to most southern thing ever, we can’t think of anything more ubiquitous than sweet tea. Our favorite recipe comes from the Patron Saint of Southern sippers- Paula Deen

For years Savannah Candy Kitchen has been making Savannah a sweet destination. Stan Strickland sits down with South Magazine to discuss his secret to success and what he has in store for the future.

Andreas and Elisha Argentinis are transforming the jewelry business by merging craftsmanship and technology.

A woman’s body is a miraculous, life-giving force, a powerful blend of softness and strength that pulses with love. At any size, shape and age, a woman’s body is a sight to behold. But the very nature of its power means that a woman’s body is also prone to being undermined and undervalued, degraded and defiled. Sometimes that’s done by obscene outside forces, other times by sinister voices within.

The Color Of Music 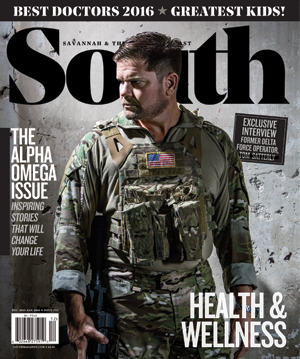